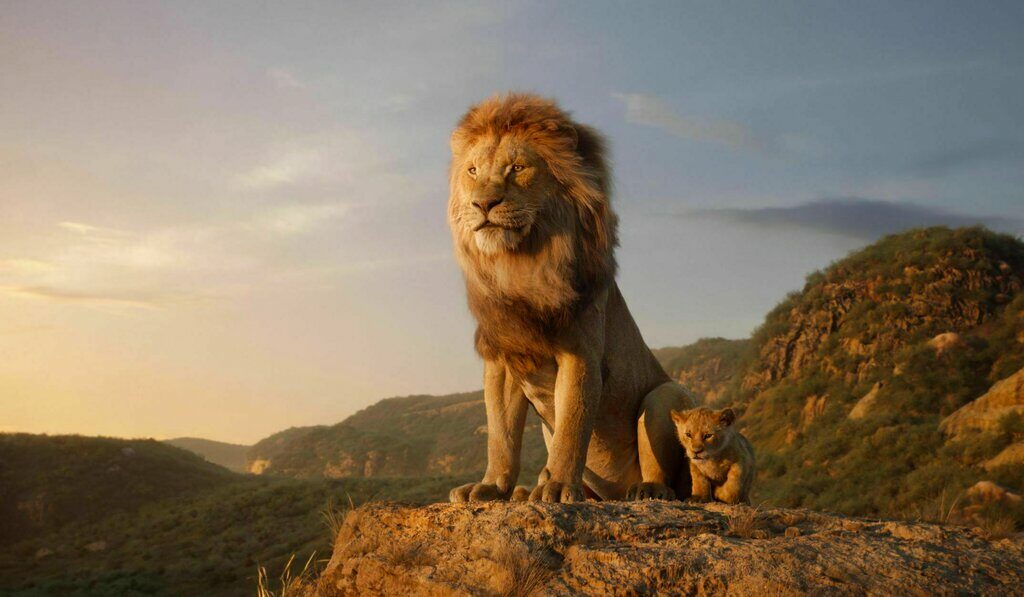 Twenty-five years after the animated masterpiece hit theaters, “The Lion King” is the latest of Disney’s classic cartoons to receive a live-action remake. The CGI-rendered take on the beloved children’s tale dazzles the senses, with spectacular visuals and stunning photorealistic animation.

But as beautiful as the film looks, it’s a carbon copy of the 1994 version, with little new to offer. “The Lion King” is a shot-by-shot, line-by-line retelling that lacks the heart of what made the original so powerful, hurt by its painstaking attention to realistic details.

The iconic story follows Simba (voiced by JD McCrary), a lion cub set to become the next king to rule over the lions of Pride Rock. When his father, the all-powerful king Mufasa (James Earl Jones), is tragically killed, Simba blames himself and runs away. He spends the next several years avoiding his responsibilities in exile with the carefree meerkat Timon (Billy Eichner) and his constant companion, the bumbling but cheerful warthog Pumbaa (Seth Rogen).

After Simba (Donald Glover) grows up, he reunites with his childhood friend and would-be betrothed, the brave lion Nala (Beyoncé). When he learns his kingdom has fallen into ruin under the rule of his dastardly uncle Scar (Chiwetel Ejiofor), Simba must discover his rightful place in the world and comes to terms with his destiny.

Under the visionary eye of director Jon Favreau, “The Lion King” roars to life with some of the best visuals ever seen on film. Favreau, who helmed 2016’s excellent “The Jungle Book” CGI remake, faithfully recreates the original frame by frame. The African plain and its creatures appear amazingly lifelike, from the birds flying over the horizon in the opening, to the glowing eyes of the menacing hyenas, to the wildebeests’ deadly stampede. The cubs themselves look adorable.

Though the film is a technical marvel, it comes at the cost of its own storytelling. The CGI-animated animals are unable to convey the emotion that was expressed perfectly through the original’s hand-drawn animation. This hampers what should be some of the film’s most powerful moments. Mufasa’s death, a pivotal turning point in the story, doesn’t register as fully as it should because Simba’s emoting is limited.

“The Lion King” feeds into moviegoers’ nostalgia for the original by staying true to its musical roots. Memorable songs like “Circle of Life,” “I Just Can’t Wait to be King,” “Hakuna Matata” and “Can You Feel the Love Tonight” still inspire heartfelt awe and singing along. But as the film strives to be photorealistic, the remake dials down the vibrancy of the song numbers. In the original, “I Just Can’t Wait to Be King” is punctuated by bursts of reds, blues, greens and purples as Simba sings about his desire to rule the Pride Lands. In the remake, the African plain’s bland beiges and browns do little to enhance the aspirational song.

Compared to its predecessor, “The Lion King” features a diverse voice cast, with some of the biggest names in entertainment backing its familiar characters. But the performances are inconsistent across the board. As the only returning actor from the 1994 film, Jones reprises the role of Mufasa, but his booming voice sounds tired. Ejiofor is OK as Scar, but his voice doesn’t send chills down your spine the way Jeremy Irons’ did in the original.

McCrary and Shahadi Wright Joseph are spirited as the young Simba and Nala. But Glover, who is known for his acting and singing talents, sounds surprisingly flat as the adult Simba. Beyoncé does a fine job as Nala, one of the few characters given new scenes as the remake aims to empower the lioness more. The songstress’ new song, “Spirit,” is a welcome addition to the film.

But the film’s true dynamic duo is Eichner and Rogen. They breathe new life into the film’s second half as the lovable Timon and Pumbaa. Receiving more lines than the characters had in the original, Eichner and Rogen are hilarious. Their side-splitting jokes score most of the film’s laughs.

As similar as it is to its predecessor, “The Lion King” runs nearly two hours, a half-hour longer than the original. The extra time may make the runtime drag for the kids in the audience, as well as for the adults who grew up with the cartoon.

The new “The Lion King” may be a good way to introduce the classic story to a new generation. But the remake doesn’t crown a new successor. The visually arresting adaptation can’t muster the power nor rouse the emotions that the original continues to deliver. 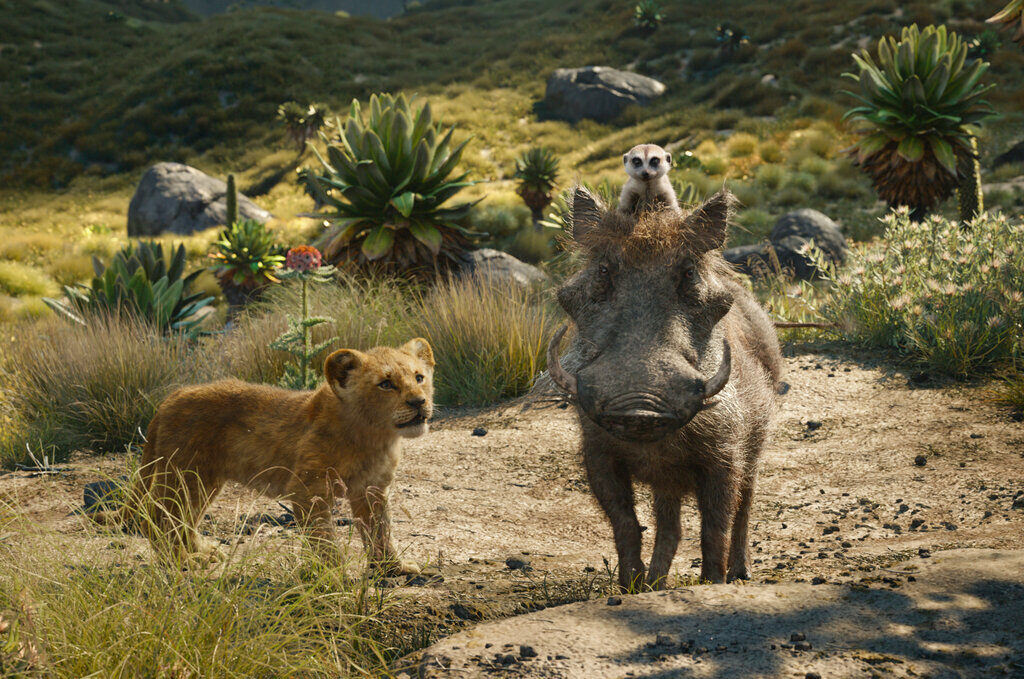 From left, young Simba, voiced by JD McCrary, Timon, voiced by Billy Eichner, and Pumbaa, voiced by Seth Rogen, in a scene from “The Lion King.” (Disney via AP, File)

July brought another live-action Disney remake to the big screen, “The Lion King,” the third of five slated for 2019. “Dumbo” and “Aladdin” hit theaters earlier in the year, while “Maleficent: Mistress of Evil” and “Lady and the Tramp” are slated for October and November.

While most of the Disney remakes before “The Lion King” accumulated buckets of money, critics have been underwhelmed by the properties. That didn’t change with this latest Disney classic.

The movie opens the same way as the original and showcases its breathtaking visual effects. All the animals look incredibly realistic, leaving the audience in awe. At times, “The Lion King” looked like a nature documentary. It will for sure earn an Oscar nomination for special effects, which will be a stacked category that will most likely include “Avengers: Endgame” and “Star Wars Episode IX: The Rise of Skywalker.” Considering “The Jungle Book” (2016), which was also directed by Jon Favreau, won a special effects Oscar, “The Lion King” should enter the ceremony as a front-runner.

That being said, nothing more is Oscar worthy about this film. A few minutes in, Rafiki takes Simba to the edge of Pride Rock and sits while holding him to the sky instead of replicating the iconic scene where Rafiki stands and stretches Simba into the sunlight. One scene in and the movie has now introduced a lazy Rafiki who is just trying to get through the day doing the bare minimum. The scene proved a sign of the laziness to come as the filmmakers decided to alter that of all things and not much else. Copy. Paste. Print.

It backed itself into a corner when it went live action. The filmmakers underestimated or just didn’t care about the importance of the characters conveying emotions. Because of the phenomenal visual effects, the animals look like animals. And they do not emote the way humans do, which makes it difficult for the audience to connect. Yet they’re still speaking English and singing, which prevents the audience from connecting to the characters as animals. It makes for a lifeless film devoid of heart. Iconic scenes, such as Mufasa’s death, held little weight.

The animation of the original helped the 1994 movie thrive. The bright colors, facial expressions and lively movement make a massive difference to the engagement of the film. It gives plenty of moments to laugh and cry, where the 2019 movie didn’t deliver.

Billy Eichner (Timon) and Seth Rogen (Pumbaa) sprint in to try to save the film, as the duo proves easily the best part of the movie. They played off each other well and lifted the energy, but the rest of the cast felt pedestrian. Much like in “Rogue One: A Star Wars Story,” James Earl Jones sounds too old to replicate the iconic voice of his prime. Donald Glover gives a bland performance as older Simba and Beyoncé struggles as Nala. John Oliver is solid as Zazu, and Chiwetel Ejiofor does a nice job as Scar, but trying to fill Jeremy Irons’ shoes is a thankless task.

Disney will never please everyone with these remakes. Too many changes will anger viewers, while not enough differences will have the same effect.

These movies continue to underdeliver, but Disney keeps bringing in the cash. “The Lion King” opened to a July record $185 million weekend, topping “Harry Potter and the Deathly Hallows Part 2” ($169 million), according to Box Office Mojo. It will make more than $1 billion by the end of its run, just like “Beauty and the Beast,” just like “Alice in Wonderland.” What incentive does the studio have to change its formula?