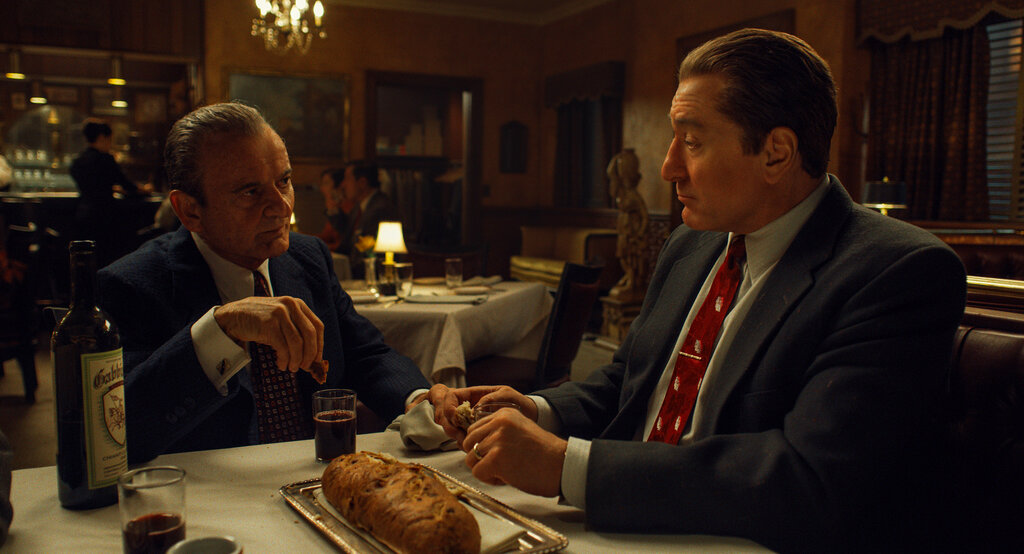 The disappearance of labor union leader Jimmy Hoffa is one of the greatest unsolved mysteries in American history. And in Northeast Pennsylvania, the possible involvement of the head of a local crime family in Hoffa’s disappearance has stirred anticipation for Martin Scorsese’s mafia drama “The Irishman.”

After years in development, Scorsese’s passion project finally comes to the big – and small – screens, playing in theaters and streaming on Netflix. “The Irishman” brings together three acting legends – Robert De Niro, Al Pacino and Joe Pesci – in a sweeping mob epic that spans decades.

With award-worthy performances, expert filmmaking and an intriguing story, “The Irishman” starts out compelling and captivating. But with its long, unwieldy runtime, the crime drama loses steam in its second half, taking a hit as it overstays its welcome.

Based on Charles Brandt’s 2004 book “I Heard You Paint Houses,” “The Irishman” recounts alleged hitman Frank “The Irishman” Sheeran (De Niro)’s claims that he killed Hoffa (Pacino) in 1975 on the orders of Russell Bufalino (Pesci), the powerful Kingston mafia don and head of the Northeast Pennsylvania crime family. The film traces Sheeran’s rise in the underworld, from Philadelphia truck driver to reliable hitman to respected Teamsters official and Hoffa’s right-hand man.

Starting in the 1950s, “The Irishman” covers decades of its main characters’ lives. Relying on de-aging technology and makeup, the film shows Sheeran as a young World War II soldier executing Nazis, then in his 40s and 50s taking out mafia targets, and up through his 70s and 80s in nursing homes. The remarkable de-aging technology transforms De Niro, Pacino and Pesci – who are all in their 70s – back to their 40s without distracting from the story.

After making acclaimed mafia flicks “Goodfellas” (1990), “Casino” (1995) and “The Departed” (2006), Scorsese returns to the genre with a focus on character over action. The celebrated director isn’t interested in making a shoot-‘em-up flick, though the film is punctuated with quick bursts of gun violence.

Instead, “The Irishman” is a methodical study of Sheeran, who narrates the film, and his friendships with Bufalino and Hoffa. Both men play important roles in Sheeran’s development. The steely Bufalino fosters Sheeran’s increasingly violent path, while Hoffa’s blind loyalty boosts the hitman’s standing in the Teamsters. De Niro shares great chemistry with Pesci and Pacino, making both friendships believable. The character dynamics build up to a suspenseful climax in which Hoffa meets his alleged end, tying the fates of all three men together.

The trio of excellent performances is the film’s biggest strength. With four Academy Award wins among them, De Niro, Pacino and Pesci bring an arsenal of experience. Wearing a permanent scowl, De Niro delivers an understated turn as Sheeran. The veteran actor does a terrific job of showing restraint as the passive hitman does what he’s told. On the other hand, Pacino is bombastic as the larger-than-life Hoffa. The engaging Pacino gestures wildly and yells loudly, bringing the mythical leader to life. Coming out of retirement, Pesci plays Bufalino as calm but calculating, living up to the NEPA mafia boss’ nickname, “The Quiet Don.” All three actors should be frontrunners for Academy Award nominations.

The supporting cast also includes a few standouts. Funnyman Ray Romano (“Everyone Loves Raymond”) gives a memorable dramatic performance as William Bufalino, Russell’s loyal brother and attorney. As Sheeran’s quiet daughter, Peggy, Anna Paquin has few lines, but makes the most of them as she represents the toll that his mob activities take on his relationship with his family.

For as much care as Scorsese put into “The Irishman,” the result is a staggering 3.5 hours – and the excessive epic feels its length. During the movie’s first half, the script blends enough action with the story’s setup that the plot moves steadily forward. The film is heavy on dialogue, which requires audiences to pay attention.

But during the second half, the film drags as the story loses momentum. This makes it more difficult for moviegoers to concentrate on the mechanics of the plot. A dinner party sequence is inexplicably drawn out. The movie starts to feel repetitious, with multiple warnings to one character and similarly executed killings. The film also takes too long to wrap up.

Three-and-a-half hours is a long time to ask audiences to sit in a theater. For those watching at home on Netflix, at least viewers can pause the film at its slower moments. But movies are meant to be viewed in a single seating, and the uneven flow of “The Irishman” makes this tricky. The film could have benefited from being trimmed by an hour without losing its impact.

Buoyed by its star power and fascinating story, “The Irishman” is a good mob flick that’s just too long, getting in its own way. Though the eagerly awaited film ultimately gets the job done, a little fine-tuning would have gone a long way in turning Scorsese’s mafia epic into a masterpiece. 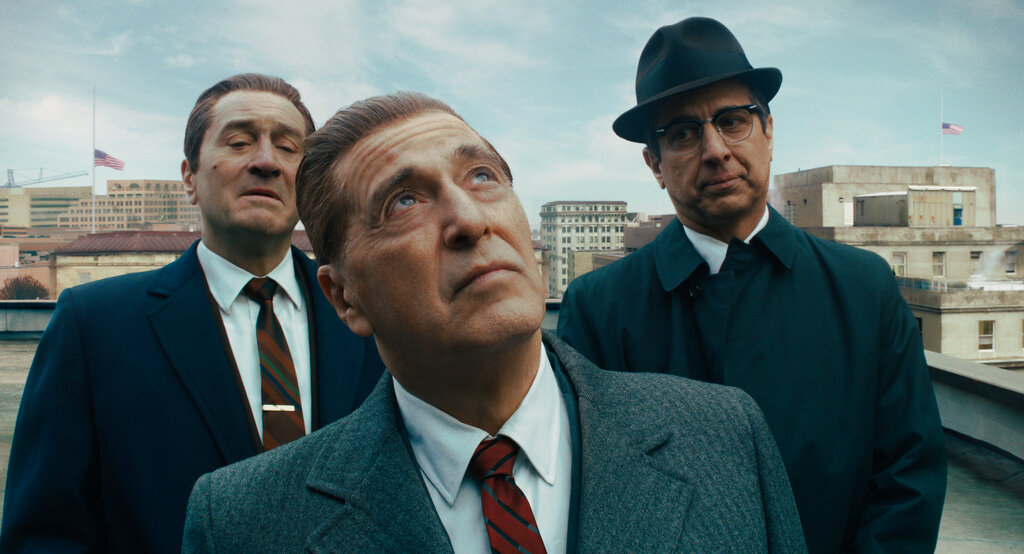 With all the anticipation of the great Martin Scorsese bringing together Robert De Niro, Al Pacino and Joe Pesci at this stage in their careers, with all the haggling between Netflix and theaters to get the film released on the big screen three weeks before it debuted on the streaming service, with all of Scorsese’s ignorant talk about what he knows to be cinema and the Marvel Cinematic Universe isn’t it, one of the greatest directors of all-time created nothing more than a good movie.

“The Irishman” features strong performances and phenomenal sequences to go with a bloated run time that clearly shows Scorsese was surrounded by a bunch of yes men.

Robert De Niro (Frank Sheeran) gives his best performance since 2012’s “Silver Linings Playbook” and his best leading effort since much longer than that. He’s clearly working his tail off, despite his age limitations.

Joe Pesci (Russell Bufalino) came out of retirement to do this film and hasn’t missed a beat. He shines in his understated performance and might be the best of the trio.

Al Pacino (Jimmy Hoffa) is pretty much Al Pacino, but it works for the film. He also has a couple great scenes with Pesci and De Niro where he tones it down to capture the intimate moments.

Scorsese sets up some great sequences, the best comes during a hit at a restaurant. The scene has a humorous setup and proceeds with a short but beautiful tracking shot. He also makes a great choice to make the hits and deaths raw. There is no glorifying what is happening. He caught some unfair criticism for glorifying Jordan Belfort’s actions in 2013’s “The Wolf of Wall Street,” which he did not do. Some audiences just missed the point, but in “The Irishman” the point is subtle, yet clear. Sheeran didn’t kill in entertaining or James-Bond-like manners. He killed because it was his job. He killed because he was loyal. It wasn’t pretty. It was real and raw.

Scorsese also introduced characters mostly with a short bio of how they died. It gives information, but it mostly shows what happens when people get involved in that life. There is a point where he uses that bio for humor as this movie is sneakily funny. He’s also able to expertly build tension in the climax.

The de-aging is pretty solid for the most part. At times it becomes incredibly distracting not because of its quality, but moreso because De Niro is 76 years old. For some season, Scorsese leaves in a scene where De Niro beats up a guy at a grocery store and it’s abysmal. De Niro may be de-aged, but he still moves like a 76-year-old man. The man he beats up is screaming in pain, while the audience knows he’s probably fine from the gentle nudging he just received.

That is the most glaring sequence, but there are others when he is just walking and he looks very old. That’s not long after Bufalino refers to his character as “kid.” When Bufalino calls him kid, Pesci and De Niro look the same age and about 40 years old. Also, Scorsese gives De Niro blue eyes, which look really bright and again distract. It’s just not necessary to make that change.

This film’s biggest problem: it’s way … too … long. This movie has great scenes, great parts, but in between those is about an hour and a half of filler. Maybe the audience can just assume the travel went just as planned instead of showing the plane ride and drive. Maybe twice is enough to bang home a point instead of seven times. Maybe when the climax is over, the film only needs 10 more minutes to wrap things up and not 45. This is a clear case of Netflix wanting to so desperately distribute “The Irishman” that it gave Scorsese free reign over the project. That rarely equates to the type of film “The Irishman” is trying to be. Even the best have to be challenged. Otherwise, the director’s cut is the one that goes to the theater and streaming service.

“The Irishman” is a good film with some phenomenal sequences, but its absurd run time knocks the film from the heights it wanted to achieve and makes its rewatchability nearly impossible. It is receiving a lot of praise, and in a weak year it has already garnered some awards attention. But to call this a masterpiece is an insult to Scorsese’s past greatness.