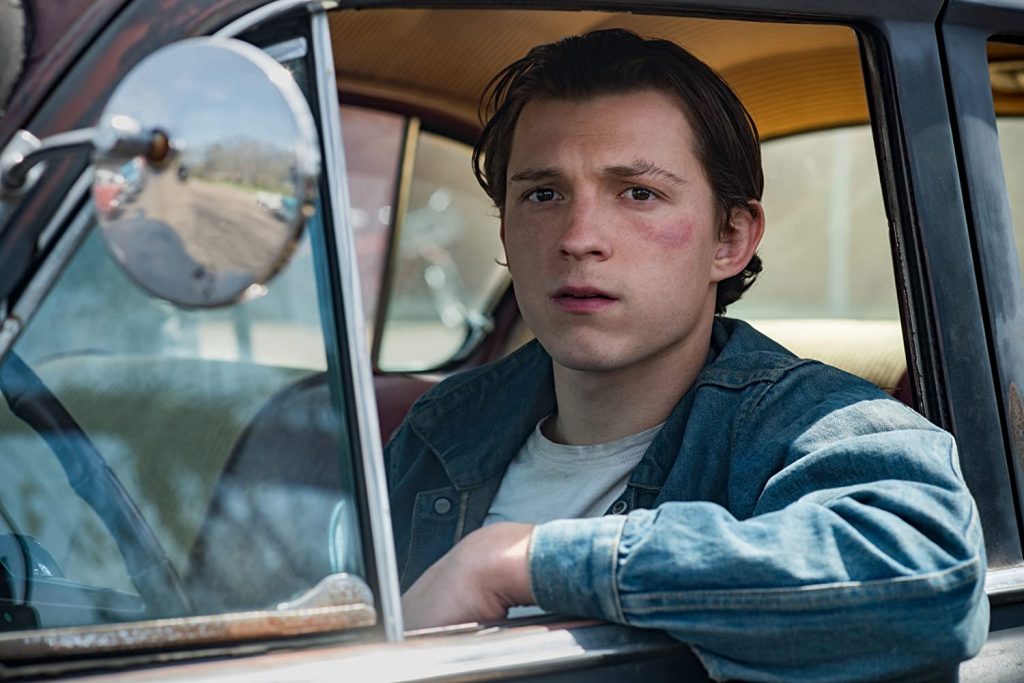 Review: “The Devil All the Time”

At Take 2 Blog, we’re still scouring the offerings of streaming services as movies slowly make their way back into theaters amid the coronavirus pandemic. As society continues to cope with the virus, racial strife and the deaths of prominent figures in 2020, the transfixing Netflix epic “The Devil All the Time” transports viewers back to the 1950s and early ’60s – and a whole different set of problems.

This time period is often portrayed as a simpler, happier time. But the bleak Southern Gothic drama exposes its dark underbelly in an engrossing examination of muddled morality. Unrelenting at times, “The Devil All the Time” tackles generational violence, organized religion and abuse of power. The star-studded ensemble is brimming with excellent performances, giving much of its talented cast a chance to expand their range.

The sweeping drama takes place across two generations and two towns – Coal Creek, West Virginia, and Knockemstiff, Ohio – amid three interweaving storylines. World War II soldier Willard Russell (Bill Skarsgard) is haunted by post-traumatic stress from his battlefield experience. Forming a unique set of religious convictions, he raises his son, Arvin (Tom Holland), instilling in him the need to protect his loved ones through violence. When Arvin enters his teens, he becomes wary of his church’s new preacher, the ostentatious Preston Teagardin (Robert Pattinson). Meanwhile, a sadistic couple – photographer Carl Henderson (Jason Clarke) and his wife, Sandy (Riley Keough) – embark on a serial killing spree through the region. As the sins add up, a day of reckoning awaits the many denizens of Coal Creek and Knockemstiff.

Brutal and unflinching, “The Devil All the Time” is not a feel-good movie. But it’s not supposed to be. The violent drama divides its cast into predators and prey as viewers witness misguided convictions, betrayal of trust and sinister intentions play out. This makes the intriguing film hard to watch as nefarious acts and tragedies befall the characters at a steady pace.

Based on the novel by Donald Ray Pollock, the dense drama covers a lot of ground, needing every minute of its over two-hour runtime. The screenplay, written by director Antonio Campos and his brother, Paulo, skillfully navigates the plot’s intricacies as characters cross paths and pivotal moments receive time to breathe. The film does a great job of keeping track of its many characters before bringing them together in its explosive finale. With a voiceover from Pollock himself, the accompanying narration offers useful insights into the characters’ heads and connects the dots for the audience.

The hard-hitting film questions strict adherence to faith when some religious leaders take advantage of that devotion, hurting the very members of the flock they’re supposed to protect. The issue is still relevant in the wake of the sex abuse scandal in the Catholic Church. “The Devil All the Time” also looks at how trauma and violence can be passed down from one generation to another. A father’s sins are not so easily forgiven when a son bears the weight of them.

With a stacked cast that features around 10 key characters, “The Devil All the Time” gives each star their time to shine. For me, the standouts were Holland, Pattinson, Skarsgard and Eliza Scanlen. In addition to Clarke and Keough, the ensemble is balanced out by strong supporting work from Sebastian Stan, Haley Bennett, Mia Wasikowska and Harry Melling.

Best known for swinging around as Spider-Man/Peter Parker from the Marvel Cinematic Universe films, Holland graduates from light-hearted superhero to conflicted antihero. As the tough yet sensitive Arvin, the actor flexes his dramatic muscles as he goes from playing an Avenger to becoming an avenging angel. Holland wears the strain of Arvin’s tragic life on his face while biding his time and meting out punishment.

Following up his affable performance in “Tenet,” Pattinson is growing into the kind of actor who steals every scene he’s in. The “Twilight” actor is pompous and over-the-top as slimy preacher Roy, preying upon the naivete of Arvin’s adopted sister Lenora (Scanlen). The actor relishes donning a Southern accent as he delivers a fire-and-brimstone homily about delusions. In a tense showdown, he goes toe-to-toe with Holland’s Arvin in one of the film’s best scenes.

After impressive performances in “Sharp Objects” and “Little Women,” Scanlen adds another one to her resume. As Lenora, the sympathetic Scanlen bears the burden of a family tragedy as a teen who is bullied for her fervent faith. She is religious but human, manipulated into trusting the wrong person. For the first 45 minutes of the film, Skarsgard carries it on his capable shoulders, shedding his Pennywise persona from the “It” films. As Willard, he peels back the turmoil of a man scarred by guilt who goes to extreme measures to try and keep his family together.

With so many characters, “The Devil All the Time” doesn’t adequately flesh out some of them. The story anoints more sinners than saints. Most characters are wholly bad, while just a few are solely good. Its most complex characters are those who demonstrate both good and bad behaviors, and these are in short supply.

On the sinners’ side, Clarke and Keough’s husband-and-wife killers spice up the narrative. Both actors are unnerving in their roles. But the screenplay offers little in the way of the couple’s motivation for their murderous spree.

“The Devil All the Time” offers a raw look at two generations and their sins during a time that wasn’t as innocent as it seemed. The grim and heartbreaking drama effectively piles on the tragedy, but its penchant for violence and gloom may not be for everyone. The engaging epic offers a fantastic showcase for its ensemble cast, showing that Holland, Pattinson and more are ready for the next step of their careers. 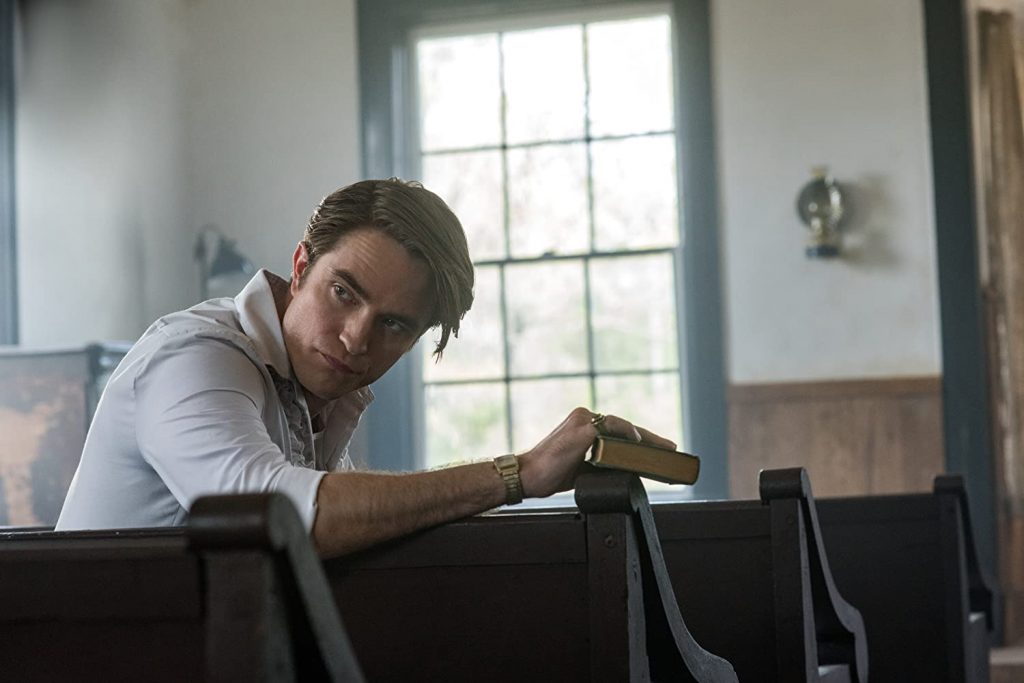 Robert Pattinson stars in “The Devil All the Time.”

Looking at the cast for “The Devil All the Time,” it was clear I needed to see this movie. The talent is immense and specifically for a few of my friends and I the film is comprised with some of our favorites. A lineup of Robert Pattinson, Haley Bennett, Tom Holland, Bill Skarsgard, Riley Keough, Eliza Scanlen, Sebastian Stan and Jason Clarke is just insane.

Watching the trailer, though, I wondered what this movie was about. It seemed like a movie that I would not watch. It looked too dark and sinister with the possibility of supernatural demons. The last part could have been just me, but with a title of “The Devil All the Time” it seemed plausible.

As the film started, I was on my toes, expecting things to pop out from behind trees or loud bangs that would cause jump scares. That was my expectation. That is not what this movie is. There are no supernatural beings. There are no demons. There are just evil people. “The Devil All the Time” hits the audience with a sense of dread. It works for a time, but eventually I became restless. When I first paused the Netflix film, I thought I made it at least half way. Well, I was only 52 minutes in with an 1 hour and 26 minutes remaining. I eventually got an hour and a half in and I was still waiting for the point. That is the film’s biggest problem. It needs too much time to set up its last 45 minutes as it has to balance so many storylines. Even with all that time, characters are underrepresented.

The main character in “The Devil All the Time” is Arvin Russell (Tom Holland) and the battle within himself gives the audience something to relate to. We see his early life and as he grows up the purity of his mother Charlotte (Haley Bennett) clashes with his father Willard’s (Bill Skarsgard) rage, brutality and sense of duty. The problem is the film spends a lot of time fleshing out Willard and Arvin’s relationship while Bennett has about 10 minutes of screentime tops.

Then there’s the Sandy (Riley Keough) and Carl Henderson (Jason Clarke) subplot, where Sandy could have been a more interesting character. However, her motivations and stance on her relationship with Carl fluctuate with no explanation as to why. The film does time hop, but she seems on board with their relationship in the beginning, even though their “business” is kind of horrifying.

Finally, Lenora Laferty (Eliza Scanlen) has a similar experience to Arvin’s childhood, yet we don’t get a lot from her perspective. I was talking with my friend before writing this review and she brought up a really good point. There could have been some solid female characters in this film and instead they were just there. With the number of characters and the amount of necessary setup, the final 45 minutes needed a great payoff.

The final third of the movie does kick into gear and for the first time I was invested in the film. Holland and Robert Pattinson (Preston Teagardin) have a great one-on-one scene, my favorite of the film. Also, the stories finally start to intersect and the momentum really picks up. The movie does thrive at the end with Holland at its heart. It almost saves the film … almost.

The film also deserves credit for establishing a tone and sticking to it. The movie is dark and uncomfortable with a constant dread. Also, the acting was excellent. I may be biased because I love most of the people in this film, but to me they were all fantastic. Holland shined brightest in a departure from his Spider-Man franchise. I’m now convinced he could take on any role.

While the acting is solid and the final third of the film comes together beautifully, the first hour and a half is tough to sit through. A lot of sad and disturbing events happen with little understanding for where the film is going. While there is an hour and a half of setup, characters are still underrepresented, especially the females. Despite a strong finish, I can’t forget what I had to go through to get there and I’ll never watch this movie again.