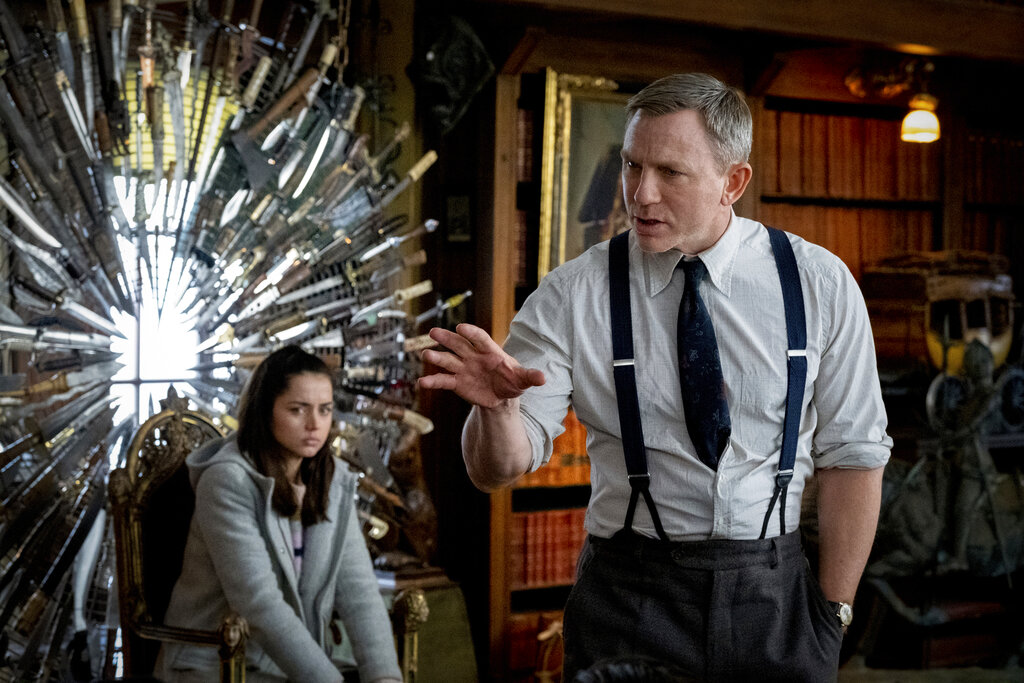 An esteemed crime novelist. An eccentric family at odds. A sprawling mansion with long corridors and hidden stairways. And an untimely death to bring them all together.

With all the pieces in place, the game is afoot in writer-director Rian Johnson’s star-studded murder mystery “Knives Out,” a modern update of the classic whodunit. Featuring a terrific ensemble cast, suspenseful plot and biting social commentary, the clever and entertaining flick is a cut above standard genre fare.

The film opens as popular mystery writer Harlan Thrombey (Christopher Plummer) gathers his quarrelsome family and loyal staff to celebrate his 85th birthday at his manor. But the big bash turns into a real-life mystery when Harlan is found dead the next morning, with his throat slit.

As the family mourns its patriarch, famed private detective Benoit Blanc (Daniel Craig) arrives to investigate Harlan’s death and determine if foul play was involved. As he works his way down the list of relatives and employees, everyone becomes a suspect. Blanc must wade through the family’s tangled web of secrets and lies to uncover the truth at its twisted center.

The less you know about the plot of “Knives Out” going in, the better. Under Johnson’s masterful hand, the crime caper is full of twists and turns. The compelling, airtight mystery winds up the tension, keeping audiences on the edge of their seats.

The smart and stylish thriller subverts the traditional structure of a murder mystery. Most whodunits save their key reveals for the end, doling out clues along the way. But “Knives Out” gives viewers a lot of information upfront. The bold storytelling choice frames how moviegoers look at each character and interpret the evidence. Johnson’s thoughtful screenplay treats its audience as intelligent, refusing to dumb down its story with each new piece of the puzzle.

“Knives Out” assembles a cast that’s to die for, led by an outstanding performance from Craig. For the second time after 2017’s “Logan Lucky,” Craig adopts a heavy Southern drawl. The James Bond actor is wonderfully over-the-top as Blanc, a combination of brilliant gumshoe Hercule Poirot from Agatha Christie’s mysteries and bumbling Inspector Jacques Clouseau from the “Pink Panther” films. “Knives Out” delights in unveiling Blanc’s presence throughout the film, whether he’s sitting by the fire interrogating suspects or shrouded in shadow outside.

Rounding out the Thrombey family are a stacked list of veterans, including Jamie Lee Curtis, Don Johnson, Michael Shannon and Toni Collette, and rising stars, such as Katherine Langford (“13 Reasons Why”) and Jaeden Martel (“It” and “It Chapter Two.”) Each character has a motive for wanting Harlan dead, and each actor nails their part. As the most veteran member of the ensemble, Plummer shows his acting chops as the sharp-minded patriarch with a conscience.

But apart from Craig, the standout performances belong to Ana de Armas and Chris Evans. After her breakout role in “Blade Runner 2049,” de Armas plays the kind-hearted Marta, Harlan’s devoted nurse who’s trying to keep her family’s illegal immigrant status under wraps. The sympathetic de Armas imbues Marta with warmth, as well as a hysterical running gag that sees the caregiver vomit every time she tries to lie. Known for embodying the honorable Captain America/Steve Rogers in the Marvel Cinematic Universe, Evans plays against audience expectations as Ransom, Harlan’s obnoxious grandson with a chip on his shoulder. It’s a treat to see Evans take on a character that’s so unlike the righteous Cap.

In addition to spinning a solid mystery, “Knives Out” puts a magnifying glass on immigration, class and privilege in the U.S. Harlan’s family has become accustomed to its wealthy lifestyle, believing they are entitled to his riches. They look down on Marta, seeing her as just the help. This becomes more unsettling as several members of the family don’t even know which country she’s from.

Unlike other recent movies — such as “Terminator: Dark Fate” and “Last Christmas” — that have attempted to tackle the hot topic of immigration, “Knives Out” meets the issue head-on. As the face of America becomes more diverse, the Thrombey family’s resistance represents the current divisive political climate.

As much as “Knives Out” shines, a few minor flaws dull the flick’s luster. At two hours and 10 minutes long, the whodunit can feel slow in parts, especially in the beginning as the story starts to take shape. With the ensemble nature of the cast, some actors get more screen time than others.

Delightful, witty and socially relevant, “Knives Out” successfully cracks the case on constructing an engaging whodunit for contemporary audiences. Here’s hoping this isn’t the last we see of Craig’s Benoit Blanc, a new detective for the modern era. 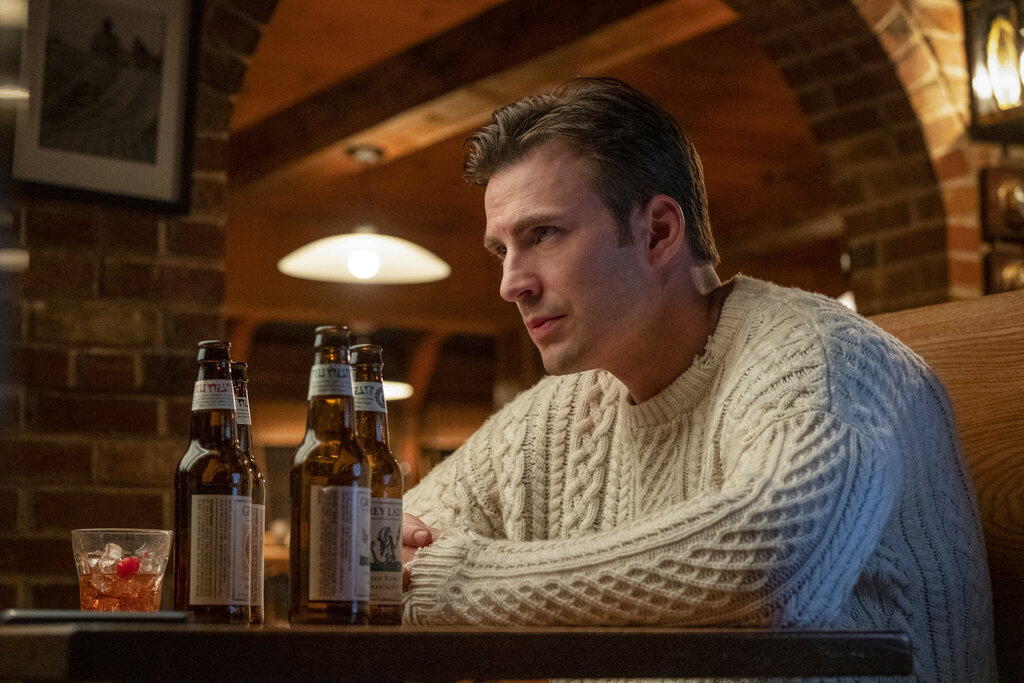 Chris Evans stars in “Knives Out.” (Claire Folger/Lionsgate via AP)

Coming off the polarizing “Star Wars: The Last Jedi,” writer/director Rian Johnson needed a new project to get away from the noise. “Star Wars: The Last Jedi” is an excellent film, but it received a lot of backlash from fans unhappy with Johnson’s vision. This was new territory for Johnson, whose breakout success “Looper” hit theaters in 2012. The low-budget, original film was met with critical acclaim and box office success. Five years later, he jumped into the spotlight with “Star Wars: The Last Jedi.” Suddenly he goes from surprise hit to a multibillion dollar franchise. This year he returned to hits original film roots and created one of the best movies of 2019.

“Knives Out” brings an all-star cast together for a smart, funny and exciting murder mystery that will captivate audiences around the world.

It all starts with Johnson as the script is airtight. It doesn’t have any plot holes, which is imperative for a whodunit, and his thorough attention to detail is extraordinary. If the audience can pick apart the big reveal, the movie fails. Johnson also creates great dialogue with knee-slapping humor and splits time among about 15 characters perfectly. Everyone has some sort of memorable scene or memorable moment that makes every character necessary. That balance establishes the characters and allows the movie to transition from scene to scene much easier.

His direction is on the same level. While Johnson does have phenomenal actors to work with, the cast is in sync and on top of their games. Again, he juggles a cast of about 15 actors who have an impact on the film. He frames his scenes so that he keeps everybody involved, whether in the foreground or background, and intersperses flashbacks seamlessly.

Speaking of the cast, “Knives Out” has the right blend of veteran and young talent. Daniel Craig (Benoit Blanc) stands out from the rest as a renowned private investigator. The British actor, most famous for playing James Bond, handles a Southern accent beautifully and provides great comedy. Craig also develops a rapport with Ana de Armas, who plays main character Marta Cabrera and serves as the heart of the film.

De Armas shines as well as her character struggles to choose between doing the right thing and protecting her family. She makes the most of her time alongside Christopher Plummer (Harlan Thrombey), establishing how strong their relationship is in a matter of minutes. The chemistry is immediate. De Armas has the most difficult role in the film and she nails it.

This would be the longest review in this blog’s history if every actor is discussed, but each plays a vital role in the film. Aside from “Avengers: Endgame,” the cast of Craig, de Armas, Plummer, Chris Evans, Jamie Lee Curtis, Michael Shannon, Don Johnson, Toni Collette, LaKeith Stanfield, Katherine Langford, Jaeden Martell, Edi Patterson, Frank Oz, K Callan and Noah Segan is the best ensemble of the year. The chemistry among them is top notch.

This movie year was stuck in a rut for months. There were good films, but nothing great, nothing award-worthy, nothing truly memorable. “Knives Out” brings life back to the season and recaptures what audiences love about movies. The enthralling murder mystery keeps first-time viewers on the edge of their seats and holds up for repeat viewings. Johnson powers this film with his superb writing and direction and deserves nothing but praise. He had a great vision and executed it flawlessly. The phenomenal ensemble feeds off Johnson’s direction and script to create one of the best films of the year.

It deserves recognition from the Academy this Oscar season and Johnson needs to keep working. His movies provide a fun and quality theater experience. “Looper” and “Star Wars: The Last Jedi” were great, but it’ll be interesting to see how he tries to top his latest project. Because, “Knives Out” is perfect.