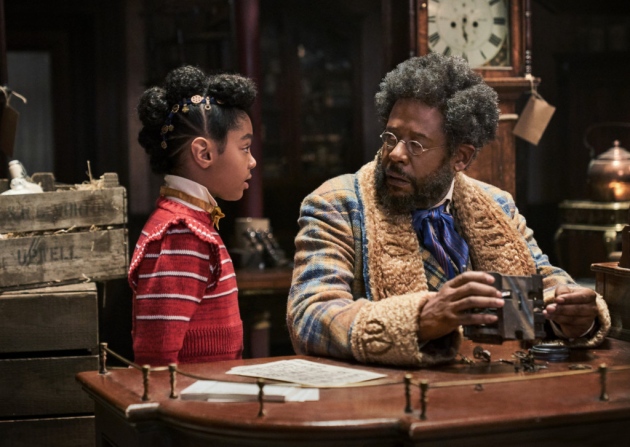 Bursting with color, imagination and heart-warming messages, the ambitious Christmas musical “Jingle Jangle: A Christmas Journey” lands on Netflix in time for the holidays. Starring a largely Black cast including Forest Whitaker and Keegan-Michael Key, the uplifting family film celebrates its diversity with an original soundtrack of show-stopping, hip-hop-inspired tunes. The sprawling production elicits wonder for bringing its period aesthetic and well-staged musical numbers to life.

But as gorgeous as “Jingle Jangle” is to watch, the holiday bonanza is a mixed gift bag. The film curiously underuses some of its best elements. “Jingle Jangle” is held back by its poor pacing, too many subplots and lack of time for key cast members.

In the Netflix fantasy, genius toymaker Jeronicus Jangle (first Justin Cornwell, then Whitaker) invents a toy like no other: a living doll (voiced by Ricky Martin). The toy promises to make Jeronicus famous and provide for his family, including his inquisitive daughter, Jessica. But Jeronicus’s apprentice Gustafson (Miles Barrow, then Key) has other ideas. Feeling underappreciated, the apprentice steals the talking toy and Jeronicus’ book of inventions.

The change in fortune devastates Jeronicus and his family. But Christmas brings Jeronicus a second chance when his similarly brilliant granddaughter, Journey (newcomer Madalen Mills), comes into his life. With Journey’s help, the inventor must learn to believe in Christmas again to create a toy that can save his livelihood – and his family.

Under the helm of writer-director David E. Talbert, “Jingle Jangle” boasts a stunning production design and special effects that lift it high above other Netflix Christmas films. The colorful 19th century clothing, cobblestone streets and storefronts feature a steampunk vibe. In addition to the live action, the film also integrates stop-motion animation, which portrays the characters as wooden dolls. The film’s most fun sequences – such as a snowball fight with some spectacular throws, and a rollicking tunnel escape – include some cool CGI effects.

“Jingle Jangle” spotlights Black people during the Victorian era, a progressive move for the holiday genre. The film delves into generational talent and the lingering effects of tragedy as it affects a Black family. Forest Whitaker is quirky but sympathetic as Jeronicus, tapping into the toymaker’s pain and loneliness. His relationship with Journey is the heart of the film. The effervescent Mills stands out as the kind and curious granddaughter with an eager mind for calculations and gears. Phylicia Rashad, the beloved mother from “The Cosby Show,” lends a calming presence as the story’s mysterious narrator.

Jeronicus, his daughter Jessica and granddaughter Journey share a vivid imagination and mechanical smarts. “Jingle Jangle” lauds their interest in science and math, and the film encourages being different. In the inspiring song “Square Root of Possible,” Mills generates chills in the tune that celebrates Journey’s individuality. “Jingle Jangle” also shows that like broken toys, families can be put back together. All of these are good messages to convey to its young audience.

The musical’s boisterous tunes reflect African American cultural influences. The songs, written by a group that includes John Legend, infuse R&B and soul with Broadway. The well-choreographed group numbers exude elements of a stage show while also feeling cinematic in scope. With its breathless optimism, opening number “This Day” kicks off the film in a jolly manner. “Make It Work” acknowledges the characters’ despair and finding the determination to overcome it.

This brings us to the film’s weaknesses. At two hours, the slow-moving film feels its length. At 40 minutes in, I checked my watch and realized not much had happened in way of the plot. While the group numbers are infectiously watchable, the solo songs often felt like they brought the film to a screeching halt rather than advance the story. The long length may be difficult for younger viewers to sit through.

In addition to the family drama, “Jingle Jangle” juggles several storylines, and it doesn’t always divvy up its time wisely between them. This includes Journey’s attempt to help Jeronicus defeat his creative drought. One of Jeronicus’s creations is a wide-eyed, adorable robot named Buddy (who looks a lot like WALL-E). When the toy takes flight, the joyful sequence will bring a smile to your face. But then Buddy has very little screen time for the rest of the movie, a misfire on the film’s part.

The film criminally underuses Key, who’s supposed to be a formidable rival for Jeronicus. Everytime the funnyman appears onscreen as Gustafson, the movie roars to life. Key even demonstrates his singing and dancing talents during the exuberant and boastful “Magic Man G.” But the problem is, Key barely appears in the movie. It’s hard to see Gustafson as a true threat when he’s not around much.

Martin is entertaining as the manipulative doll Don Juan Diego, but his screen time is also too short. Instead, more time is given to an uninteresting romantic subplot between Jeronicus and annoying widow Ms. Johnston (Lisa Davina Phillip).

With its original story and soundtrack, “Jingle Jangle: A Christmas Journey” marks a breakthrough for diversity in holiday movies. The heart-felt, eye-popping film brings together a talented Black cast, high production value and heart-pumping musical numbers. But the holiday flick can be a journey to get through as the story moves slowly, dividing its time unevenly between its cast and various subplots. Despite its flaws, the destination is worth the journey as “Jingle Jangle” rings the bell on a new Christmas classic. 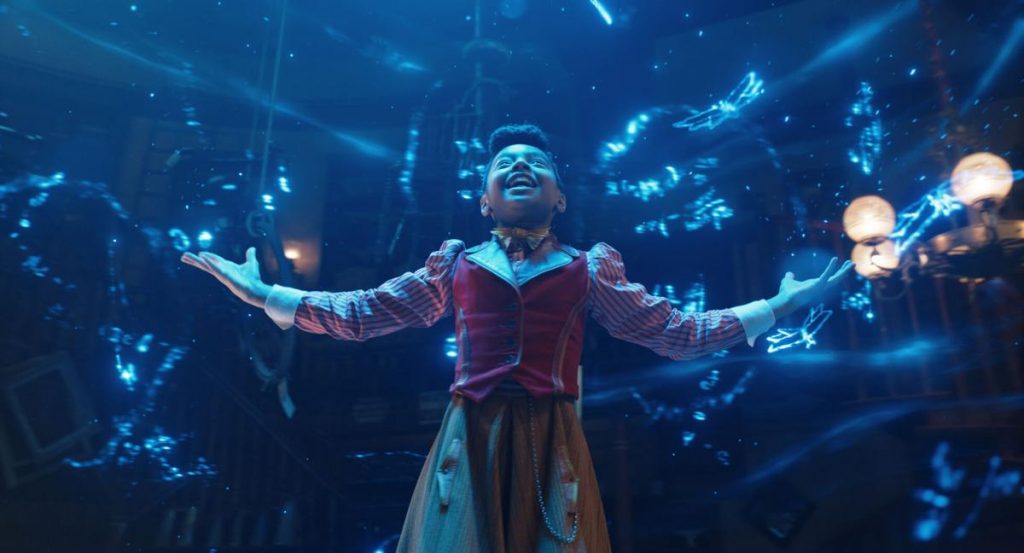 After reviewing the adult romantic comedy “Holidate,” we decided to watch another Christmas offering from Netflix, the family musical “Jingle Jangle: A Christmas Journey.” For the second straight week, I was happy with what I saw.

“Jingle Jangle: A Christmas Journey” gave us some great performances from familiar faces and a breakout role for another. Academy Award winner Forest Whitaker shines as co-lead Jeronicus. I really enjoyed his mumbling curmudgeon approach to the role. It made me laugh quite a bit. It was a coming out party for his co-star Madalen Mills (Journey) who gave the film the energy and childlike wonder that it needed. The young actress also has a powerful voice. I always think it’s incredible when a child actor can go toe-to-toe with a veteran award winner. Mills does just that.

Phylicia Rashad (older Journey) is great in everything and this film uses her in the same way “The Princess Bride” uses Peter Falk. Rashad reads a story to her grandkids, which is the story we see. A limited role for Rashad, but she brought a warm elderly presence that helped the film.

We’re going to stay with the acting here as I really enjoyed the dynamics among the star players and the supporting crew. Lisa Davina Phillip (Ms. Johnston) builds a great dynamic with Whitaker. She plays a widow who falls in love with Jeronicus. Phillip had me laughing every time she was on screen with her attempts to woo Jeronicus with the help of a few random backup dancers and drive her mail truck without hurting anyone. She’s the character I enjoyed most. I also got a kick out of the young Kieron L. Dyer (Edison) who played off Mills very well, adding a few laughs of his own along the way.

The choice that bothered me was the use of Anika Noni Rose (Jessica). She’s a Tony Award Winner and Jeronicus’ daughter, yet she sings one, maybe two songs? Rose was easily the best singer in the film, so why she was kept out of the movie for so long baffles me. Know your talent and use your talent.

The music was solid, as I enjoyed the joyful offerings more. While it didn’t bother me, this film that advertises magic and wonder doesn’t have a ton of magic and wonder. If I were a kid, I might be upset about the lack of energy and color for a good chunk of the film. “Jingle Jangle: A Christmas Journey” opens with a strong number with great energy and good choreography (I’m still trying to figure out how a dancer did a 360 spin from one ladder to another). Then Jeronicus’ life plummets to rock bottom. As a result, the bright colors and energy from the opening is replaced with dull lighting and sadness. It’s important to the film for this to happen and adults would understand that. Kids may not.

The special effects are off and on. Most scenes look great, while a couple sequences don’t look real. It was a little strange, like the budget ran out and they needed to do some creative editing. Maybe that’s why a lot of scenes take place in a dreary pawn shop.

A kids movie needs a message that resonates with the young audience and this film provides It. I like the way the movie attacked the theme, too, as the kids aren’t the people who have to learn. It’s the adults who have to recapture the imagination of their childhood.

Looking at “Jingle Jangle: A Christmas Journey” through the eyes of a 30-year-old, I think the movie is very strong. For a kid, a two-hour runtime with a character trying to cut off the fun for a good chunk of the movie is a lot to ask a young audience to sit through. Don’t get me wrong, it’s a good film for families to enjoy, but if it found a better balance between the adult themes and the childhood wonder it could have been even better.