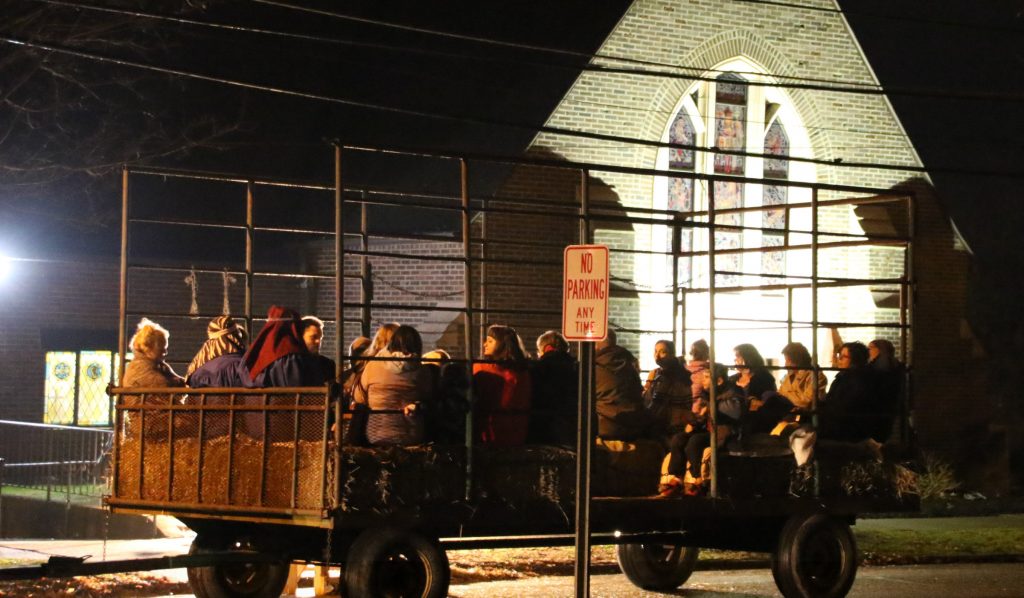 When it comes to putting on the Journey to Bethlehem in Tunkhannock each year, the mission for Deborah Kintner is to bring at least one person to God.

“I did that last year,” she recalled. “One person came to me and didn’t even know the story of the birth (of Jesus). That to me meant more than anything. All the hard work was worth it.”

The Tunkhannock United Methodist Church’s Journey to Bethlehem returns for its fourth year this Friday, Dec. 13, and Saturday, Dec. 14.

Starting at 6 p.m. each night, a hay wagon will pull visitors through eight stops in Tunkhannock, each depicting a scene from the story of the birth of Jesus Christ.

The idea for the journey came from Kintner’s daughter, who started a similar event at her Methodist church in Carlisle.

“I took a few people down to look at it and decided we were going to do it here,” she said. “It was very inspiring. They put a couple thousand (people) through.”

The script features many biblical references, with some sections including whole Bible passages, as well as songs and other additions.

A narrator on the wagon explains the story to the crowds and pauses for each action scene.

The journey opens at Caesar Augustus Palace with two scenes.

“That gives a little bit of the background on the biblical times,” explained Tunkhannock UMC Pastor Jon Buxton. “Israel was ruled by the Romans at the time, so you get an understanding of that and the power that Rome had.”

In the next scene, those on the journey see an angel coming to Mary, who struggles with why she was chosen as the mother of Jesus. This scene features ‘Be Born In Me,’ sung by Aimee Sample and Patty Frangella.

An angel also visits Joseph, who is told that everything will be alright, and that he should stay by Mary’s side.

“This is a very long journey from when Mary was told she’s expecting to the birth of Jesus,” Kintner said.

In the bakery scene, the “weary travelers” could expect to receive some bread, one of the examples of audience interaction throughout the journey.

Towards the end of the journey, Mary and Joseph make it to the inn, where there is no room for them to stay, featuring the song ‘Thou Long Expected Jesus’ sung by Sean Hadley and Allen Wehler.

Following an appearance from the shepherds and angels, the journey culminates with a live nativity scene featuring the Tunkhannock UMC Choir singing ‘This Child.’

Back at the church, visitors could enjoy free refreshments.

It takes 80 people to put on the journey, which takes roughly 600 visitors through each year.

“We try to include as many children and young people as possible. It really incorporates a lot of families,” Buxton said.

In the last three years, the Journey to Bethlehem has received many positive responses, many of which have said it puts the meaning back into the season, he said.

“It gives the message of what we’re celebrating at Christmas, the birth of Jesus and the hope he brings to everyone,” Buxton said.

For more information about the Journey to Bethlehem, visit tunkumc.org or call 570-836-1229.