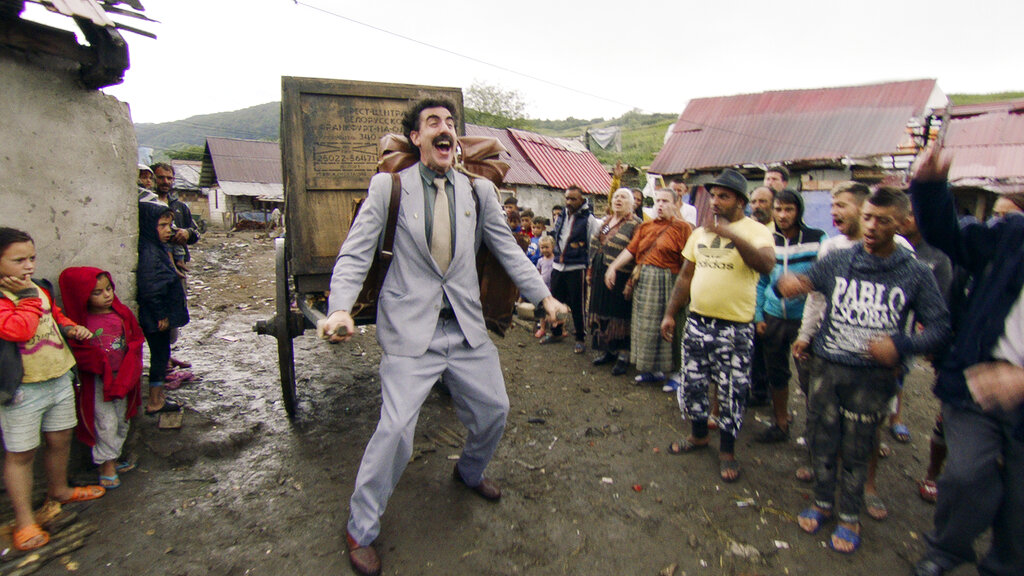 Fourteen years ago, “Borat” hit theaters and a cultural phenomenon was born. So much so that people started talking like “Borat.” I was one of those people and … I’m still one of those people, but at least it’s relevant with the release of the sequel “Borat Subsequent Moviefilm.”

The gap was a little strange. I was 16 when the first film was released in 2006 and I loved it. When I heard a second movie was coming out Friday, I was very excited. But then I thought … should I be? I adored the first film, but I hadn’t seen it in years. Again, I was a junior in high school. I was a different person.
Well the return to this … franchise? proved perfect as “Borat Subsequent Moviefilm” picked up right where the first one left off. It’s completely inappropriate … and hilarious.

In some ways, the sequel improved upon the original. While “Borat” will always have the shock value on its side, “Borat Subsequent Moviefilm” is more of a focused film with a cohesive story, good acting and surprising plot twists. Borat returns to the US & A to give vice president Mike Pence a gift. When he returns to America, people on the street recognize him, talk to him and ask for his autograph. It’s a clever meta sequence I really enjoyed. Because of his recognition, he’s forced to disguise himself in a number of costumes.

The fall (autumn) of Sacha Baron Cohen continues as he stars in back-to-back films (“The Trial of the Chicago 7” last week). He’s phenomenal in both films. As Borat, he returns to his wheelhouse and doesn’t miss a beat. He perfects the comedy and carries the heart necessary to his character and the film. This was no surprise.

Maria Bakalova had the breakout performance of the film. She plays Borat’s daughter Tutar, and her role is vital. Bakalova serves as the heart of the movie. She tackles hilarious comedic sequences, while balancing her innocence and evolution throughout the film. It’s a performance I didn’t expect, or a character I expected to have such an impact. However, she proves much more vital to the film than Borat’s traveling companion in the first film Azamat (Ken Davitian).

This could be perceived as a problem, but it really depends what side of the fence you fall on. “Borat Subsequent Moviefilm” has an agenda and it’s clear Cohen wants Donald Trump out of the White House. So much so that as soon as the movie ends, “NOW VOTE” flashes on the screen. It even puts Rudy Giuliani in a compromising position.

This film is incredibly in the moment. It was shot during the coronavirus pandemic, so I have no idea how they turned this movie around so quickly. While the pandemic isn’t the focus of the film, it is a big part of the plot.

I went into this movie looking to laugh and I came out with a heartfelt father-daughter story that dives into female equality. There were also plenty of laughs along the way.

“Borat Subsequent Moviefilm” brings the same laughs from the first film, but somehow keeps the humor fresh 14 years later. While it was impossible for the sequel to have the same shocks as the first film, it has a more cohesive story with more of a heart. Cohen and Bakalova give outstanding performances and build a great chemistry. Like the first film, this movie is not for everybody. It’s inappropriate and targeted toward liberals. It’s also of the moment, which may hurt it down the road. However, it proved an incredible achievement to recapture the magic of a cultural phenomenon that is 14 years old. 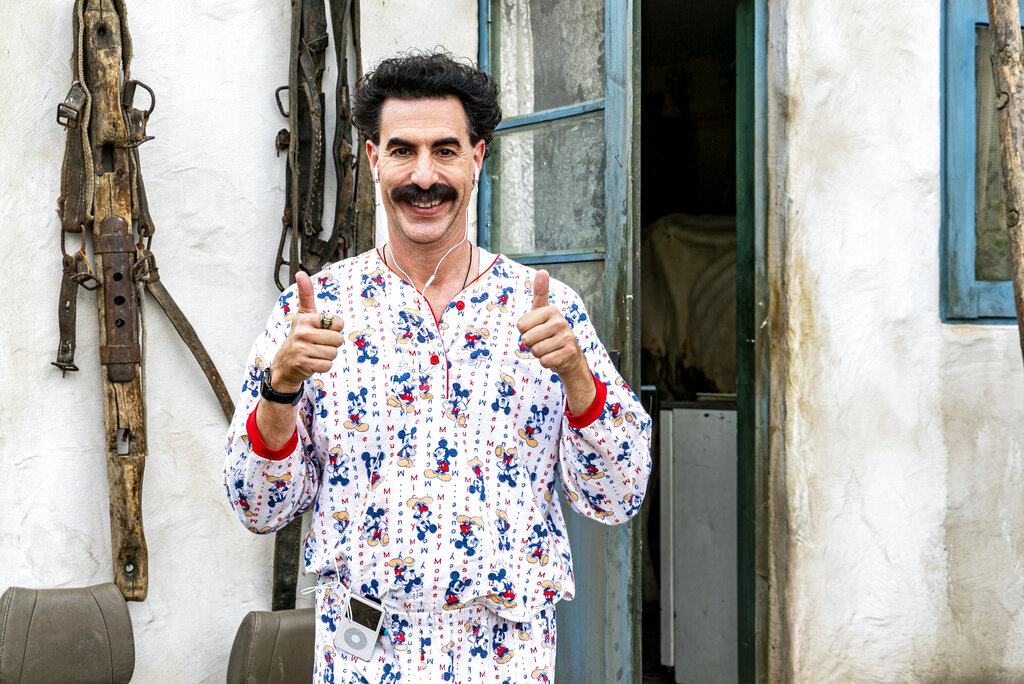 The first “Borat” film launched a cultural phenomenon when it bowed in 2006, but it wasn’t one I was on board with. I hated the first movie. Its inappropriate, gross-out humor turned me off completely. The film thrived largely on shock value, and I suffered through it.

I had no desire to revisit the character until I learned the sequel, “Borat Subsequent Moviefilm,” would be hitting Amazon Prime. Why would Sacha Baron Cohen bring back his sexist and anti-Semitic Kazakh journalist now, after a 14-year gap? The more I learned about the film, the more I realized that Joe and I had to review it.

“Borat Subsequent Moviefilm” is still offensive, but it’s also rip-roaring hilarious, incredibly relevant and surprisingly heartfelt. The sequel is a far better film than its predecessor, perhaps more relevant than the first film was for its time. “Borat 2” provides the laughs we need right now amid a polarizing election season and an ongoing pandemic.

The sequel is more focused and streamlined than the scattered original. In 2006’s “Borat,” the notorious journalist, played by Cohen, travels across the United States to learn about the country’s culture to bring back to his glorious nation of Kazakhstan. The road trip plays like a bunch of skits, with Cohen pranking real-life people. In the follow-up, Borat returns to present a gift to Vice President Mike Pence and boost Kazakhstan’s standing with our nation’s leadership. This time around, “Borat 2” flows better, with a constant through line, developed characters and shocking turns.

About 20 minutes in, I was worried “Borat Subsequent Moviefilm” would end up a retread of the first film when it spit out the same crude humor and upsetting jokes about women and ethnic groups. But the film starts trending upward when Cohen, who is repeatedly recognized by people on the street as Borat, must resort to a series of disguises. It’s an ingenious intersection of real life and fiction.

I didn’t get Cohen’s shtick of disguising himself and catching people off guard with his outlandish behavior until this film. Cohen’s most daring stunt involves infiltrating a Pence appearance at a Conservative Political Action Conference event earlier this year. The actor arrives fully dressed in a Ku Klux Klan outfit – and no one stops him. And Cohen ups the ante from there. The “Borat” mastermind effectively blends humor and disbelief, drawing plenty of laughs and jaw drops.

The savvy Cohen has his finger on society’s pulse as the biting satire takes on the divisive political climate. Make no mistake: the liberally minded “Borat 2” is critical of President “McDonald” Trump and his administration, from his interactions with women to the downplaying of the coronavirus pandemic. I was surprised the film was shot so recently amid the pandemic, which speaks to what its audience is experiencing right now. Reminiscent of the first film’s rodeo scene, Borat sings an appalling song at a rally amid the virus lockdown, and the camera captures the unfiltered reactions of those in attendance. The film also catches Trump’s lawyer Rudy Giuliani in an embarrassing position, and the movie leaves it up to the viewer to interpret. “Borat 2” shines an unbecoming light on our country’s current standing on the world stage as it encourages its audience to vote in the next election.

In the follow-up, Borat teams up with his daughter, Tutar (Maria Bakalova), and their tender relationship forms the core of the film. In a standout performance, the newcomer keeps up handily with Cohen. Bakalova nails the awkward jokes and physical comedy that accompany the role. After I watched the movie with my friend, she pointed out the film excels at creating humor from second-hand embarrassment. Bakalova demonstrates this perfectly at a debutante ball that goes horribly awry. During the sequence, I found myself cringing for her character, yet I couldn’t stop laughing.

The father-daughter dynamic between Borat and Tutar fixes a problem I had with the first film. In “Borat,” the lead character jokes about outdated female stereotypes, but the film did little to challenge them, especially with how it treated Pamela Anderson. However, “Borat 2” promotes female empowerment as Tutar matures and becomes her own person. The actress balances the Kazakh teen’s naivete with her burgeoning awareness of women’s rights. Bakalova and Cohen share a lovely chemistry as Tutar opens Borat’s eyes to gender equality.

“Borat 2” turns uplifting as the film shows people can evolve. Borat not only grows as a person because of his daughter, but the anti-Semitic character is capable of changing his world view. In a poignant scene, Borat meets in a synagogue with real-life Holocaust survivor Judith Dim Evans. The movie is dedicated to Evans, who died this summer. Evans’ family is suing Amazon and the film’s producers over her appearance, but according to published reports, Cohen broke character and explained the scene’s purpose to Evans. The moving scene added unexpected depth to the film and has since stuck with me.

If Borat can open his mind, so can I. I went into “Borat Subsequent Moviefilm” dreading it, and instead I came out enjoying it. “Borat 2” is the funniest film I’ve seen so far this year. The gut-busting yet heartwarming sequel improves upon the original in almost every way, making the most of its timely setting. The politically slanted film isn’t for everyone, and its low-brow humor can still be off-putting. But as our nation finds itself in the grips of turmoil, “Borat” allows us to laugh during a stressful time.