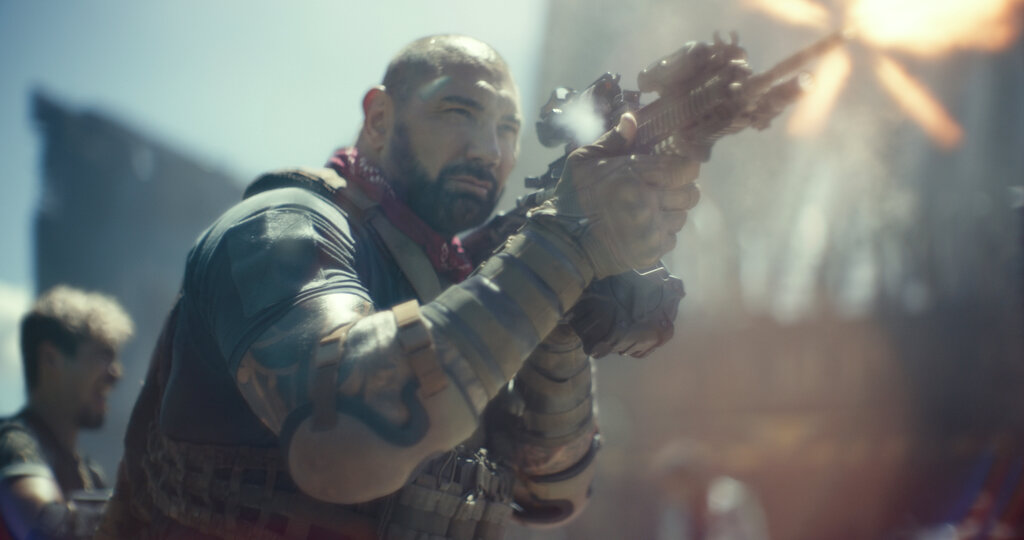 Review: “Army of the Dead”

2021 may be Zack Snyder’s year. First, the polarizing filmmaker released his fabled “Snyder cut” of “Justice League,” allowing him to complete his sprawling vision of the DC Extended Universe superhero teamup. The redo was a significant improvement upon the original 2017 film, helping the director reclaim his work.

After playing in the world of superheroes for more than a decade, Snyder returns to his roots – zombies – with “Army of the Dead.” The director’s reentry to horror comes 17 years after his debut film, 2004’s “Dawn of the Dead” remake. Not just a zombie film, “Army of the Dead” is a zombie-heist film with a heart amid its gory guts.

Snyder puts his own spin on the well-worn zombie genre. The wildly fun popcorn flick, now playing in theaters and on Netflix, features the best of Snyder’s hallmarks – a bold aesthetic, solid action and likable characters. But the film also includes the worst of Snyder – a bloated runtime and an unsatisfying ending.

The film takes place in Las Vegas. Zombies have overrun Sin City, and the government plans to destroy it with a nuclear bomb. Before Las Vegas is blown to smithereens, casino owner Bly Tanaka (Hiroyuki Sanada) entices ex-mercenary Scott Ward (Dave Batista) with a daring proposal: retrieve $200 million from the vault of his casino, of which Ward can keep a cut. To pull off the heist, the zombie slayer assembles a ragtag team of individuals with various skills, including his estranged daughter, Kate (Ella Purnell). As the clock winds down, Ward and his crew must battle zombies, his daughter’s resentment and a pushed-up deadline.

“Army of the Dead” hits the jackpot with its Vegas setting. With its flashy casinos and blood-soaked Elvis impersonators, Sin City provides the perfect backdrop for a zombie apocalypse. As Snyder used vibrant colors to bring 2009’s “Watchmen” to life, the director embraces the neon tones of the Strip in “Army of the Dead.” Hot pink opening titles flash over scenes of costume-clad zombie showgirls devouring a gambler. The gore contrasts with the glitter and glamour.

Like any Snyder film, the action and special effects are stunning. The first 15 minutes deliver a gorgeously edited introduction to the world that Snyder, who also co-wrote the film, has created. The film starts with an explosive, fiery crash, then shows the undead invade the casinos as they make Vegas their playground. There’s plenty of zombie kills as the characters make their way through the half-lit casino with the ever-present threat of the undead. “Army of the Dead” even introduces a zombie tiger, Valentine, who is as lethal as she is unsettling.

Snyder brings new blood to the zombie genre. By meshing a zombie film with a heist film, the director raises the film’s stakes. “Army of the Dead” cranks up the tension as the crew works against the impending nuclear bomb to open the safe while outrunning the deadly undead. The safe becomes as big of an obstacle as the zombies. The film also adds a new layer to its villains. “Army of the Dead” introduces a new kind of zombie, the “Alphas.” They’re smarter and faster than the shuffling “shamblers,” and able to show emotions like a regular human. The Alphas are an intriguing evolution of the traditional zombie that freshen up the stale genre.

The immensely enjoyable ensemble is capably led by Batista. The former WWE wrestler proves he can take on leading man duties, following his role as the quirky Drax in the “Guardians of the Galaxy” films and a revelatory part in “Blade Runner 2049.” Batista imbues Ward with regret as he looks to repair his relationship with his daughter, and their bond forms the backbone of the movie. Moviegoers can sympathize with Ward and root for him to pull off the job against nearly impossible odds.

Apart from Ward, however, few of the characters are fully fleshed out. As the brave and caring Kate, Purnell joins her dad’s mission to look for her friend Geeta (Huma Qureshi), a young mother who has gone missing. The cool and collected Nora Arnezeder shines as the street-smart Lilly, nicknamed the “Coyote.” My favorite character is Dieter (Matthias Schweighöfer), the awkward safe cracker. The nerdy Dieter strikes up a sweet friendship with tough, gun-toting zombie hunter Vanderohe (Omari Hardwick) that I really liked.

The film deserves a shoutout for its integration of Tig Notaro. The comedian stands out as Marianne Peters, an unflappable pilot who brings sarcasm and swagger. What’s amazing is Notaro originally wasn’t supposed to be in the movie. She replaced comedian Chris D’Elia, who was digitally removed after allegations of sexual misconduct. Notaro filmed her scenes by herself, and they were added to the film through a seamless blend of special effects.

As entertaining as “Army of the Dead” is, the film’s main problem is its length, a common problem facing Snyder’s work. Two hours and 28 minutes is a haul for a zombie movie, and its pacing suffers for it. After the dynamic introduction, “Army of the Dead” lacks any major zombie action for almost an hour. The film uses this time to establish its world, which it does well. The long pause between zombie attacks could disappoint moviegoers, though the action-packed last hour makes up for it. Although the film has plenty of time to develop its characters, it doesn’t apart from its main father-daughter relationship. The film could have easily lopped off a half-hour, which would have resulted in a tighter movie.

With so much time invested, the ending falls short of the buildup. Yes, it’s a zombie film, so we’re aware the characters’ survival is not assured. The screenplay gives hints along the way at a future for some characters. But shortly after some of these moments, the film turns on a dime and offs the character. The screenplay introduces certain emotional beats only to use them for shock value. It’s a cruel bait-and-switch.

In a confusing move, some of the characters’ fates are left muddled. It’s not clear whether this was done for the purpose of a sequel, or if the film just lost track of its characters. Unfortunately, it’s just that hard to tell.

“Army of the Dead” delivers the second half of a solid one-two punch from Zack Snyder. The director puts his stamp on a genre in need of fresh blood. The zombie-heist hybrid features the right mix of thrilling action, a delightful cast and an emotional core.

The zombie flick limbers along due to its overly long runtime, and its ending lacks a satisfying conclusion. But the film’s strengths outweigh its weaknesses. “Army of the Dead” reanimates a fun time at the movies. 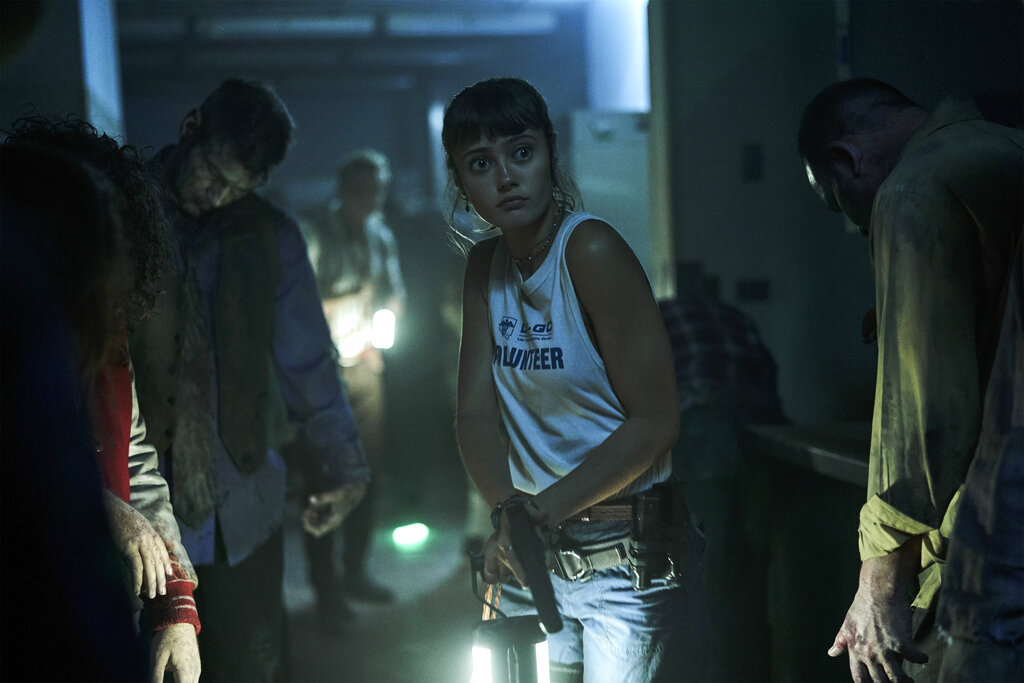 Ella Purnell in a scene from “Army of the Dead.” (Clay Enos/Netflix via AP)

Coming off the director’s cut of “Justice League,” Zack Snyder built up a lot of good will with fans, myself included. A couple months later, he released “Army of the Dead” on Netflix. That strayed from his usual allegiance to Warner Bros., but returned to his roots of the film that first put him on the map, 2004’s “Dawn of the Dead.” I had every confidence Snyder could make a fun zombie action movie, but the film’s length and unnecessary drama doomed “Army of the Dead.”

In typical Snyder fashion, the film starts well with a strong opening sequence and an excellent title sequence that uses visual storytelling and introduces characters the audience will see down the road. Although this is a zombie film, it’s also a heist film. The outbreak happened in Las Vegas, the zombies are contained and the government is set to nuke Vegas in a few days. However, a casino owner, Bly Tanaka (Hiroyuki Sanada), wants the money in his vault, which is surrounded by zombies. So, he hires Scott Ward (Dave Bautista) and tells him to get a team together to get the money.

Ward builds a team, “Ocean’s 11” style, and we’re off … Wait, no we’re not. The film must establish the unnecessary drama first. Ward has a rift with his daughter, Kate (Ella Purnell), and her friend is inside the quarantine zone with the zombies. This fun zombie heist film suddenly turns into a father/daughter drama. The film took itself too seriously for what it is. The viewer can feel the run time (2 hours and 28 minutes) as the film comes to a screeching halt when the Wards discuss their issues and Scott tries to decide what he will make in his food truck after the heist. They even shoehorn in a character in love subplot, something the audience already figured out without the story shoving it in its face. I think “Army of the Dead” also tries to be a political commentary at one point.

In the meantime, the film forgets it introduced one character and made a big deal about his saw, which he never ended up using. It also introduced ideas within the quarantine zone that are never revisited. The film throws a lot at the audience and just asks the viewers to accept it all. It could have benefitted from more world building and less drama. I feel like I say it every other movie review, but focus on what the movie is — a zombie heist film.

The shame is, when it does focus on that, “Army of the Dead” is pretty good. Bautista once again proved he can act as long as the role is within his range. The dynamic between Vanderohe (Omari Hardwick) and Dieter (Matthias Schweighofer) is funny and enjoyable. The zombie action set pieces prove extraordinary and feed into Snyder’s strengths. There’s just too much randomness and drama in between to make it a truly fun film.

“Army of the Dead” has the right actors and director in place to create a fun zombie action heist film, but squanders it with drama and a lack of focus. This makes it a typical zombie film, as proved by its predictable ending, and unmemorable. Snyder has strayed before trying to make a film more than it is with 2011’s “Sucker Punch.” Unfortunately, this film is closer to “Sucker Punch” than his better work.