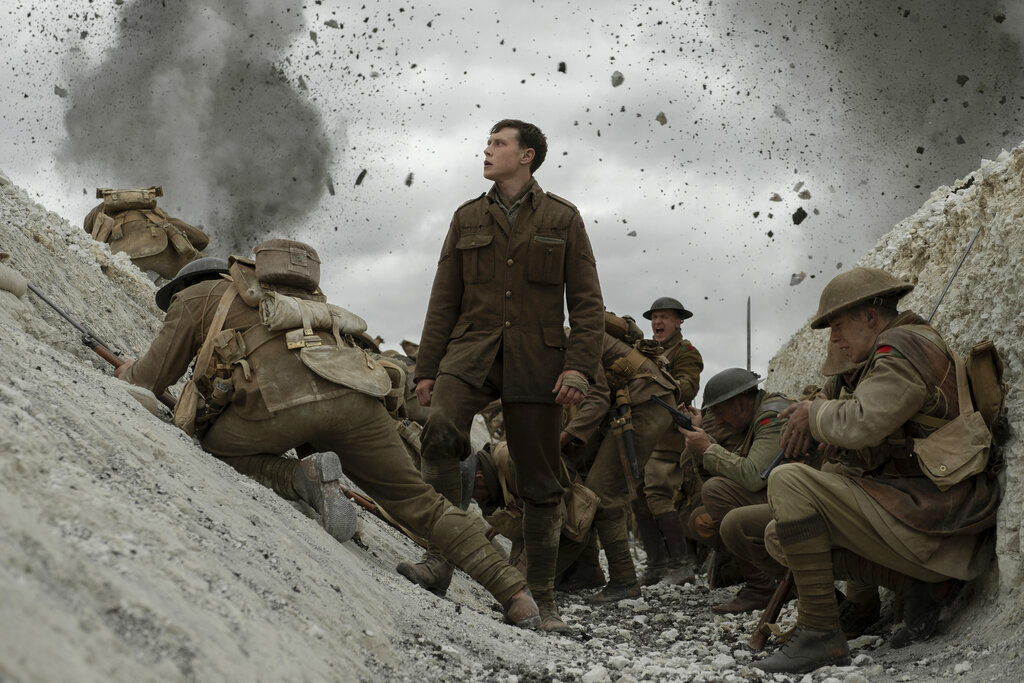 The Academy often nominates a war epic for best picture as “Dunkirk” (2017), “Hacksaw Ridge” (2016) and “War Horse” (2011) come to mind. “1917” was added to that list a week ago. While none of those films took home the award at the end of the night, “1917” is among the frontrunners, if not the frontrunner, to win best picture. And rightfully so as it leaves the audience in awe and wondering how director Sam Mendes constructed this masterpiece.

“1917” takes the audience on a journey with British soldiers Lance Cpl. Tom Blake (Dean-Charles Chapman) and Lance Cpl. Will Schofield (George MacKay) as they try to find Blake’s brother and prevent an attack that will put 1,600 men at risk. And when I say journey, I mean it. The camera follows at least one of them throughout the film, whether they’re simply walking in a trench or sprinting across a battlefield. Oh, and did I mention this movie is shot and edited as one take? There is maybe one time when the film truly cuts midway through the movie. I haven’t seen this technique since 2015’s best picture winner “Birdman.”

While “Birdman” was an incredible technical achievement, “1917” takes it to the next level with breathtaking action sequences. After a while, I just started to marvel at the pure genius of the film. I looked for spots where the movie hid cuts, trying to understand how this remarkable feat happened. I was proud that I think I found a couple, but I’ll have to ask Mendes. Whether the camera captures the gritty realism of World War I or the surprising beauty in a war-torn town, “1917” looks gorgeous behind the great cinematographer Roger Deakins.

The way the film is shot immerses audiences into the intensity of each moment. The imagery captures what fighting in World War I was like. Some things are as simple as trudging through mud or getting a hand caught in barbed wire, while more grotesque moments involve the soldiers walking through bodies. The tracking shots also give the audience the claustrophobia of the trenches.

Despite its 10 Oscar nominations, “1917” garnered no acting nods. That doesn’t mean the acting isn’t great. Chapman, of “Game of Thrones” fame, does a nice job, but MacKay shines brightest. The audience can feel the emotional weight of each situation as he is able to overcome obstacle after obstacle. MacKay also expresses himself beautifully through his face as his roller coaster of emotions happen in real time. He transforms as his character embraces his role in the war effort. “1917” also sprinkles in cameos from great actors, such as Colin Firth, Andrew Scott, Mark Strong and Benedict Cumberbatch.

Thomas Newman’s score is gorgeous and captures the essence of every scene. It touches the emotion of the audience, especially in a powerful battlefield sprint toward the end of the film. The visual effects are also phenomenal as “1917” doesn’t look like it has visual effects. Everything just looks and feels so real.

The complete film captures the horrors of World War I and because of that it helps the audience realize the importance of little things. If you want a glass of milk, you simply walk to the fridge and pour yourself one. When one of the soldiers finds milk, it might as well be gold. The lack of food is also something that hangs over the main characters so even a broken off piece of bread is a godsend.

“1917” is absolutely a technical achievement, but it is so much more than that. It has strong performances with MacKay leading the way at the emotional center. Its one-take style separates it from any war film before it, and takes “1917” a step above best picture winner “Birdman,” which used the same technique. Every moment is vital as the audience never leaves the action. “1917” is easily one of the best films of the year, if not the best.

Dean-Charles Chapman, left, and George MacKay in a scene from “1917,” directed by Sam Mendes. (François Duhamel/Universal Pictures via AP)

Two young soldiers face the ultimate test of bravery, survival and hope in the powerful World War I battlefield masterpiece “1917.” Shot to look like one continuous take, director Sam Mendes’ heart-stopping journey into the heart of war is a dazzling piece of filmmaking.

The war drama plunges moviegoers into the action from the get-go, and it refuses to let go until the very end. Gripping, dynamic and emotional, “1917” delivers a transformational experience for its characters as well as its audience.

In April 1917, British soldiers Lance Cpl. Tom Blake (Dean-Charles Chapman) and Lance Cpl. Will Schofield (George MacKay) receive a monumental task. The two friends must warn a brigade to call off an upcoming attack or risk walking into a trap set by the Germans. If they fail, the lives of 1,600 men are at stake – including Blake’s lieutenant brother.

The unprepared Blake and Schofield set off by foot through the French countryside and into enemy territory, where danger lurks at every turn. The pair must battle the clock and the constant threat of the Germans to stop a near-certain bloodbath on the battlefield.

From the moment it starts, “1917” immerses audiences in Blake and Schofield’s do-or-die mission. Mendes, Academy-Awarding director of “American Beauty,” crafts a master class in sustaining tension. The film – which Mendes also wrote and produced based on a story his grandfather told him – is a solidly paced two hours, making the most of every minute. The third act alone will keep audiences holding their breath as the mission comes down to the wire.

Nominated for this year’s best director Oscar, Mendes’ extraordinary filmmaking makes him a favorite to win. Filming “1917” to look like a single take creates a palpable connection between the audience and the main characters. To achieve this effect, Mendes shot the film in several six- or -seven-minute-long scenes. The camera faithfully follows Blake and Schofield’s grueling travels, moving up and down to mirror the various terrain. As the duo climbs through muddy trenches, crosses no man’s land and hikes through fields, hills and rivers, the camera captures every step. The kinetic lens swings smoothly between the fronts and backs of its protagonists so the audience always sees what they’re seeing.

The effective technique heightens the real-time feel as Blake and Schofield encounter one peril after another. The two face rigged explosions, sudden injuries and enemy attacks. The film establishes a sense of urgency as the two soldiers react to the growing obstacles in their way. They see firsthand that “war is hell” as they step over dead horses and the corpses of their fellow soldiers. This is the very thing they are trying to prevent if they succeed in delivering the message to halt the attack.

The cinematography in “1917” is gorgeous, landing Roger Deakins his 15th Academy Award nomination. The film traces the soldiers’ journey from day to night, switching between a palette of pale browns and grays under a hazy sun to the ominous shadows reaching across the night. During a spectacular overnight sequence, Germans bombard a French town. The terror of the black sky meets the red glare of the fiery blasts in one of the most beautiful scenes in any film in the last year.

Though visually stunning, “1917” also packs an emotional punch. The film draws from the strong performances of its leads. Chapman, from “Game of Thrones,” and MacKay carry the weight of film on their capable young shoulders.

The two are a study in contrasts. The idealistic Blake is hopeful and determined, willing to do whatever it takes to complete the mission and save his brother. On the other hand, Schofield is pessimistic and jaded, scarred from what he has seen on the battlefield. But MacKay rises to the challenge as he earns the film’s most heartfelt moments. The talented actor conveys Schofield’s dueling feelings of despair and drive through his facial expressions as the soldier is repeatedly run through the wringer.

Though the character development is reserved for the film’s protagonists, “1917” includes memorable performances from its star-studded supporting cast. Colin Firth, Andrew Scott, Benedict Cumberbatch and Mark Strong play small but pivotal roles in the story, adding gravitas to their few scenes.

“1917” transports moviegoers into the belly of the beast in an unflinching look at war and its devastating costs. The tension-filled epic is one of the best films of the year, a moving and technical achievement that will stay with moviegoers long after the credits roll.