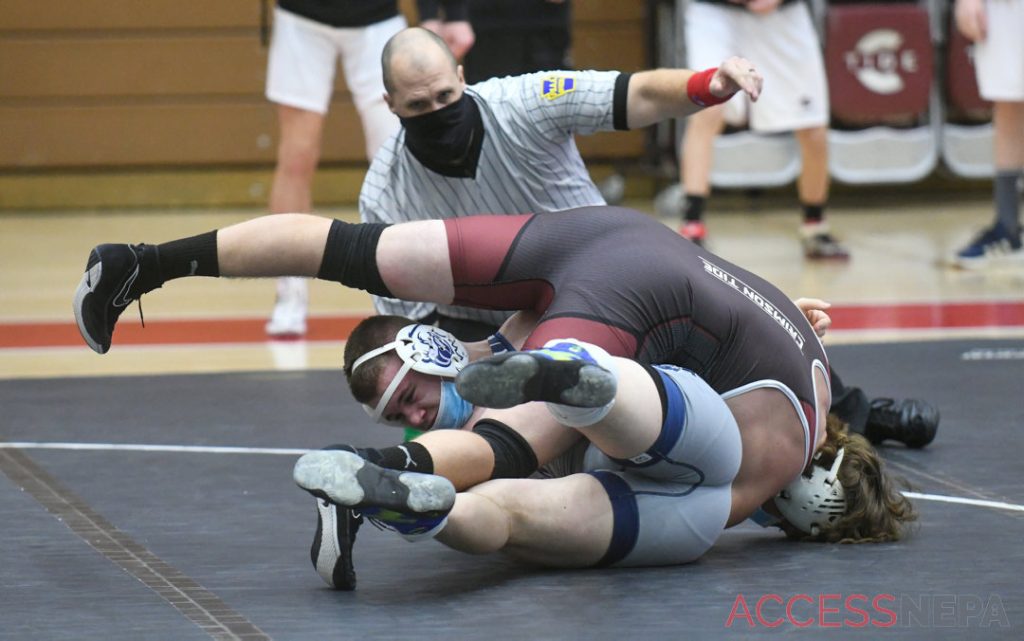 Everybody involved in wrestling — athletic directors, coaches, athletes — have had to adjust and sacrifice to have a season at all during the COVID-19 pandemic.

That includes referees, too.

While officials in all sports get close to the action, no other officials’ job description includes lying prone on the playing surface (mat) swiping out back points.

This season, the changes have been many. Masks are everywhere. Referees don’t raise the winner’s hand; instead, they point to them. They get in there when they have to, but social distancing is stressed whenever possible.

It’s not ideal, but right now, local officials agree it’s necessary. After all, most of the men in the Pottsville Chapter of PIAA Wrestling Officials are former wrestlers who love the sport and officiate to stay active and give back.

“It’s uncomfortable at times, but I’m willing to do it so that the kids have a chance to wrestle,’’ PIAA and international official Sam Julian said.

Added former two-time state champion wrestler and long-time local official Mark Cesari: “It’s definitely different. There’s a lot of difficulty of wrestlers keeping their masks on during a match. It makes it difficult to manage.

“Being such a contact sport, it’s very difficult to keep them on the way they’re supposed to be worn. … It’s less different for us than the kids. We’ve adjusted to it. It can be a little inconvenient as times, but we try to keep our distance as best we can and manage it.’’

The Pottsville Chapter is small in numbers, but it will be well-represented along the postseason trail, which begins Saturday and continues Sunday for District 11 wrestlers.

Chapter president Michael Peleschak, Richie Dunkelberger and Rodger Gehring will officiate at the District 11 Class AA Tournament at The Charles Chrin Community Center near Easton. At the same time at Parkland High School, Cesari and Dave Andreuzzi will be part of the District 11 Class 3A crew.

In addition, Cesari has been chosen to be part of of the crew for the Class 3A Super Regional on March 6 at Quakertown High School.

“Our chapter is very small but we did extremely well with postseason assignments,’’ Peleschak said. “We have a very experienced group of officials in the Pottsville Chapter and encourage more people to consider joining us. If you are 18 or older and have graduated from high school and would like to become a wrestling official, you can complete the online test at PIAA.org. It is a great way to stay involved in the sport after high school.’’

Peleschak mentioned one positive for wrestling that has come out of the pandemic: Live streaming of events. He and other officials use those videos to self-critique their performances and try to get better.

Julian, who also has duties as an assistant coach in the Pottsville program, said he uses video to break down his officiating. Julian said he enjoyed officiating some folkstyle high school matches this season, but he has focused on climbing to the international level refereeing freestyle and Greco-Roman tournaments.

He was part of the officiating crew for the 2016 Summer Games in Rio and has a busy few months ahead. Julian was assigned to officiate at the European Olympic Qualifier from March 15-22 in Budapest, Hungary. He will work the U.S. Olympic Trials on April 2-3 in Fort Worth, Texas, and officiate at the World Last Chance Tournament in early May in Sofia, Bulgaria.

“It has been challenging to officiate in the current pandemic,’’ Peleschak said. “Officials are required to wear masks and come dressed ready to officiate. This has been challenging, but as the wrestlers have adapted, so have the officials. Our local officials along with our assignor and Schuylkill League athletic directors have done a great job with the multiple schedule changes and have provided a season for our student-athletes the best we were able to.’’