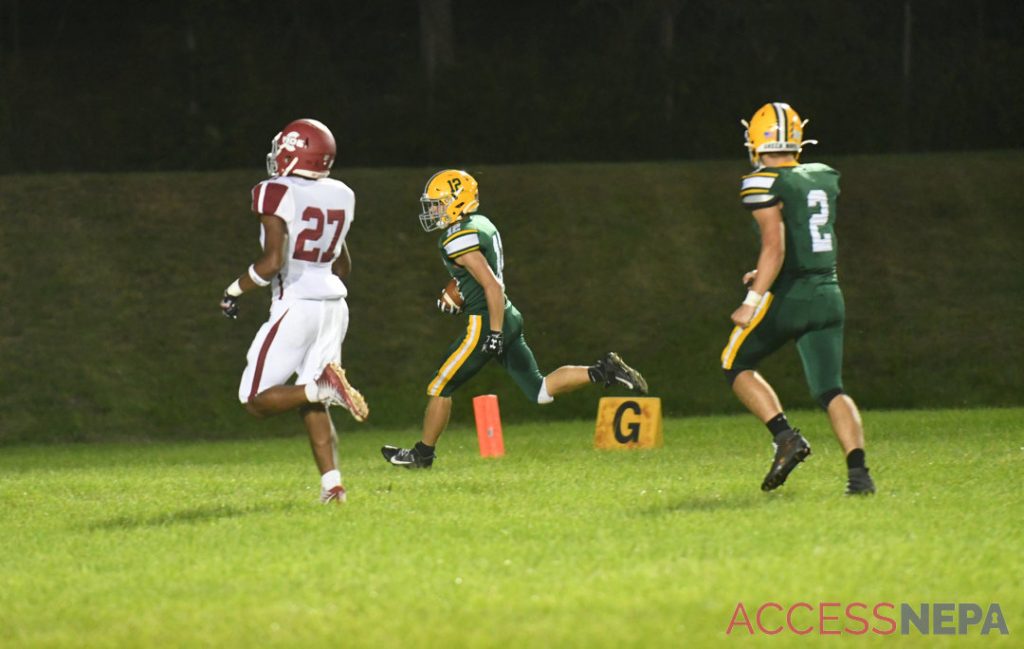 Wrap it up: Look back at unique high school football season

When the Schuylkill County Football Coaches Association held its annual Media Day event this past summer, via Zoom, the questions asked to the players and coaches involved centered on if there would be a 2020 high school football season.

At that time, Tri-Valley was already suspended until October. The governor’s office and the PIAA were slugging it out. It appeared that, on any given day, the hammer would drop and the season would be scrubbed.

Here we are, five months later, and it’s amazing what has transpired.

Not only did we have a 2020 season, but it was a historic one at that:

All of that despite a coronavirus pandemic that at times throughout the season forced games to be changed and/or canceled, teams to shut down operations for two weeks and coaches and players to wear masks on the sidelines.

When you look back at it all, it’s remarkable that we got the entire season in.

There are a lot of people that deserve kudos for making sure the 2020 season got from Point A to Point B.

From great leadership by Schuylkill League president Steve Toth and District 11 football chairman Jason Zimmerman, to the hard-working athletic directors at every school, to the coaches and players who diligently followed the COVID-19 protocols, to the trainers and medical personnel that did all of the testing, to the maintenance crews and game-day staff who sanitized facilities and equipment on a daily basis.

It took the hard work of many to make it happen. That hard work produced a season full of memories that may go unmatched for a long, long time.

As we put the final bow on the 2020 season, let’s take a look back at some of those memories, from the season’s best games to record-breaking performances to other noteworthy accomplishments:

Starting the season with a bang

The season’s best game, at least its most surprising, was one of its first.

The Schuylkill League’s revised schedule began Sept. 11 with a round of crossover games between the league’s big schools and small schools. Designed to limit travel, the crossovers pitted neighboring schools against one another. One of those contests featured the area’s biggest school, Pottsville, facing the area’s smallest school, Nativity, in the ultimate David vs. Goliath matchup.

Under the lights (when they worked) at Saint Clair’s Veterans Stadium, the Green Wave used a strong fourth-quarter performance to pull off a 31-21 upset.

Cody Miller connected with Keegan Brennan on a 76-yard touchdown pass on Nativity’s first play to set the tone, and two more TD passes from Miller to Brennan in the second half helped the Green Wave overcome a 21-14 deficit.

The win ranks among the best in Nativity football history, alongside the Eastern Conference playoff win over Southern Columbia, the Wave’s 1989 win over Schuylkill Haven and the 1982 upset of Minersville. 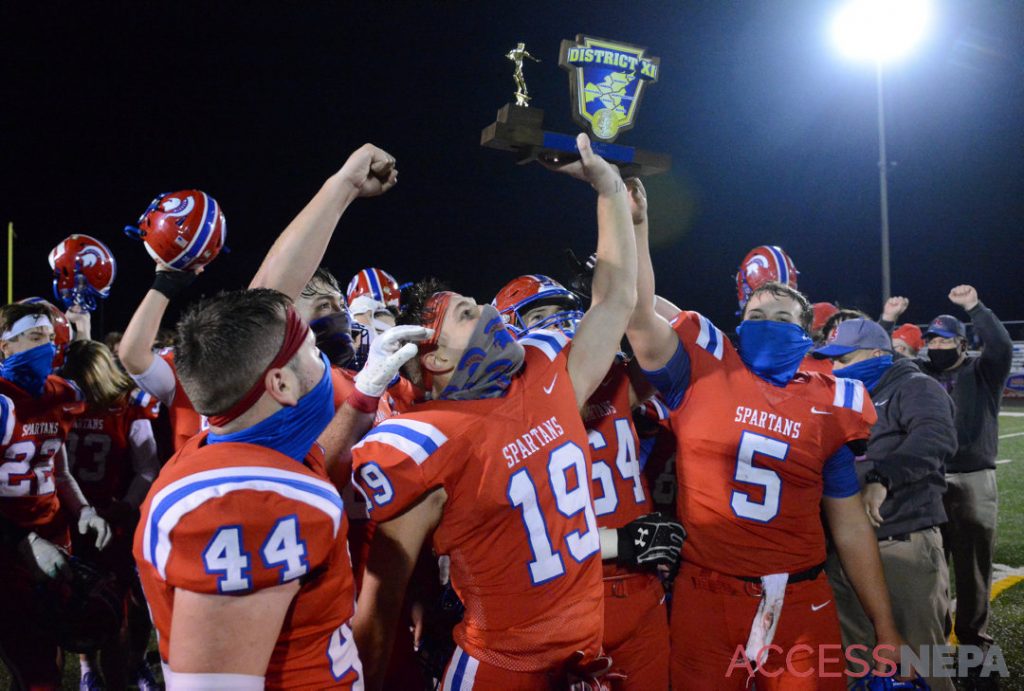 I had the honor of witnessing Nativity’s win over Pottsville and was on hand for three other games that rank among the most thrilling of the season.

The Spartans averaged a league-best 43.5 points per game in their eight contests, but on this Sept. 25 evening on their home turf, they mustered just 20 yards and two first downs in the first half as Blue Mountain led 7-0.

In overtime, the Spartans won the game on a fake field goal, with kicker Dylan Dietz finding Jared Tinari for the game-winning score.

Williams Valley 35, Nativity 34: The Green Wave stormed out to a 21-0 lead on a rainy Saturday night in Saint Clair, only to watch the Vikings use a second-half surge to win the game.

Bryce Herb’s 1-yard TD plunge with 5 minutes remaining put the Vikings ahead, but Nativity made one final drive, reaching the 11-yard line.

A controversial spot on a Stephan Spolski reception resulted in a fourth-and-inches play. Nativity elected to go for the field goal to win it, but Cody Miller’s 27-yard attempt was wide right with 51 seconds left.

Williams Valley 35, Tri-Valley 28: Following a similar script, Tri-Valley dominated the first half en route to a 21-7 lead at intermission in this battle for the Schuylkill League Division II title Oct. 23 in Williamstown.

Moving All-State tight end Jesse Engle to tailback, the Vikings stormed back, scoring 28 second-half points to pull out the win.

The thrilling game whet our appetites for a rematch in the District 11 Class A title game, but that contest was canceled due to positive coronavirus tests. So the backyard rivals were declared Class A co-champions.

After years of battling water and drainage issues, Jim Thorpe installed a new artificial surface at its stadium. The construction project got a late start and forced the Olympians to play on the road or at Panther Valley Stadium in Lansford for six weeks until christening the new field Oct. 23 against Pottsville.

Schuylkill Haven also got a new turf surface, as the district installed a fresh carpet on Rotary Field after the old one lasted 15 seasons.

Pottsville made headlines when Republican Herald aerial photos showed the playing surface at Veterans Memorial Stadium in disarray just weeks before the start of the season. Credit the grounds crew at Pottsville for getting the field in tip-top shape before the Tide’s home opener Sept. 20.

Caught in a haze

Mount Carmel’s proud program hit a disappointing low when several Red Tornadoes players were involved in a hazing incident of a teammate.

The Tornadoes, who opened the season 2-1, were forced to forfeit an Oct. 9 game against Warrior Run, then ultimately canceled the rest of their season.

On a positive note, the Mount Carmel players did community service projects for every one of the games they had to forfeit. Let’s hope the program uses those team-building events to rebound in a positive fashion.

Herb finished as the area’s passing yardage leader with 1,875 yards and 24 TDs, breaking the Vikings’ career marks in both of those categories with 4,880 yards and 66 touchdowns. Engle caught 35 passes for 685 yards and 13 TDs, becoming Williams Valley’s all-time leader in receiving touchdowns (34).

Robinson was the Cards’ defensive leader, setting school records for tackles in a game (26) and career tackles (144).

At Minersville, freshman QB Connor Schwalm broke the District 11 freshman record for passing yards in a game with 430 in a Week 8 win over Schuylkill Haven. Senior wide receiver Gabe Davis caught eight passes for 208 yards in that game, ending his career as the school’s all-time leader in receptions (102), receiving yards (1,613) and receiving touchdowns (16).

Lehighton wide receiver Zach Hunsicker hauled in 48 passes for 739 yards and five TDs this season, ending his career as the Indians’ leader in receptions (114) and receiving yards (1,732).

Shenandoah Valley ended its 34-game losing streak that dated back to 2017 with a 37-34 victory over Col-Mon Vo-Tech on Oct. 20. The Blue Devils, however, also had the dubious honor of falling to Kutztown 36-0 on Nov. 6, which was the Cougars’ first win in 35 games.