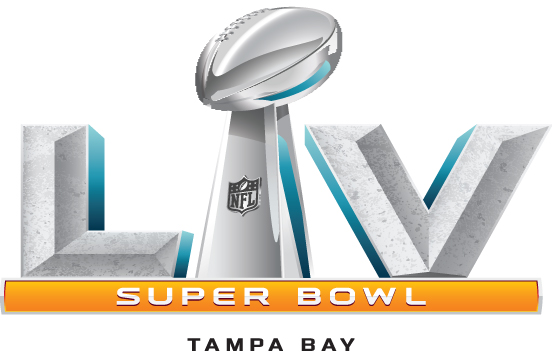 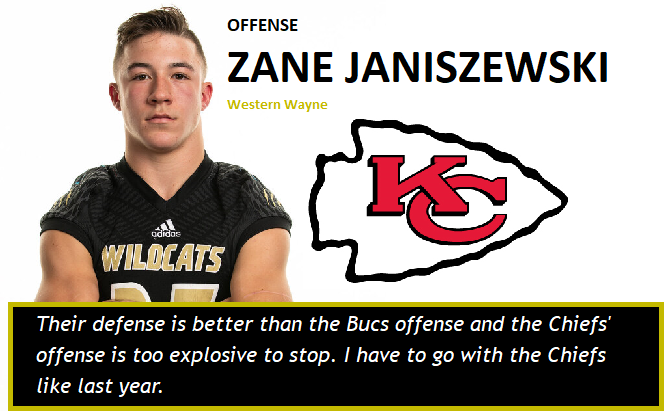 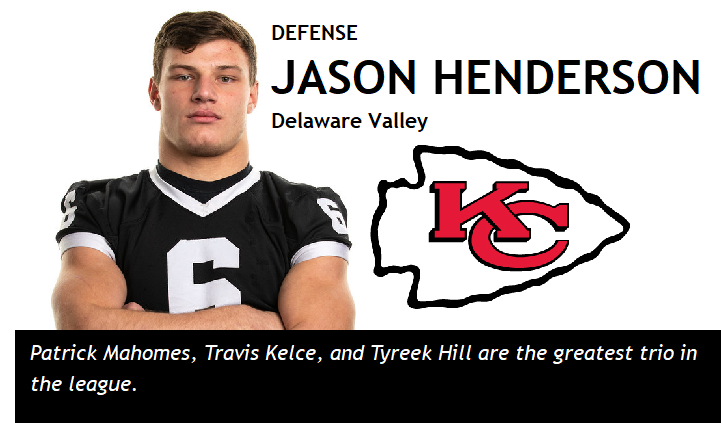 Johnny Gilchrist is the all-time passing leader in career yards for the Lackawanna Football Conference and he believes establishing the running game will be the key to victory. 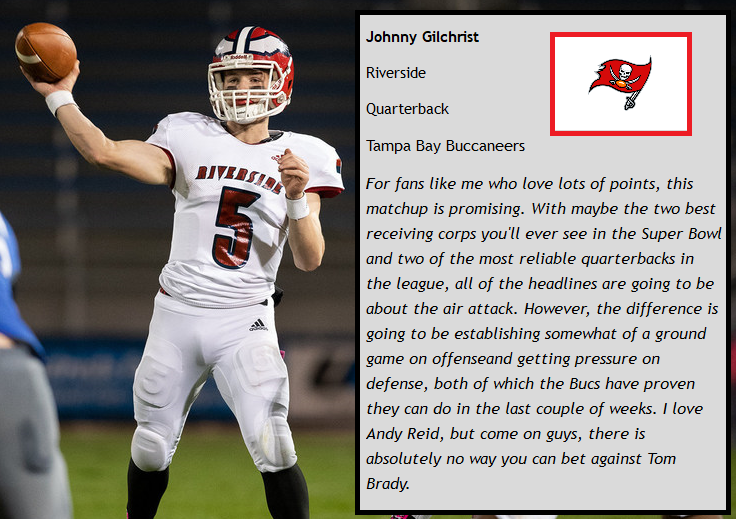 MOST IN DEPTH PICK

Nick Rasmus really crunched the numbers and took his time making his pick. He highlighted each team’s strengths and went with his gut in choosing the Chiefs.

This group split on its picks. Two for each. Cristian Buckley and Ray Melnikoff each chose to go against their picks from last season when they were rooting for Kansas City over San Francisco.

Like the backs, this group is split, which is interesting, but with Brady and Mahomes at the quarterback position, the receivers don’t favor either. Also, Lakeland’s CJ Dippre picked Kansas City because of its offense when he was an All-Region defensive end and he picked Tampa Bay because of its defense when he was selected All-Region for his all-around play on offense.

Looks like the linemen favor Tampa Bay slightly, 3-2. From what we are told, this really could have gone either way, though. Lackawanna Trail’s RJ Schirg must have learned his lesson after picking the 49ers over the Chiefs last season.

As seen above, Nick Rasmus makes this a split group with two votes for each.

When you add Henderson’s pick of Kansas City, the lnebackers favor the Chiefs, 3-1. Thought this might go in the other direction considering they are defensive players, but Mahomes has that much of an impact.

It appears that players who are in the secondary, while impressed with Patrick Mahomes, know all too well how good Tom Brady is in the big game and how he can pick a defense apart.

Both the punter and the kicker have selected Tampa Bay. Boy, Brady has impressed this generation of players.

However, last season the All-Region team picked the 49ers, 16-14, and the Chiefs won.

Several players on this season’s All-Region team are repeat selections to the team. Two players, Jason Henderson and Ray Melnikoff made their third appearance on the team and in the Super Bowl picks. Henderson is 2-0 in his picks, taking the Patriots and Chiefs. Melnikoff picked the Rams and the Chiefs. Giovanni Spataro made the All-Region team as a sophomore and correctly picked the Patriots over the Rams.