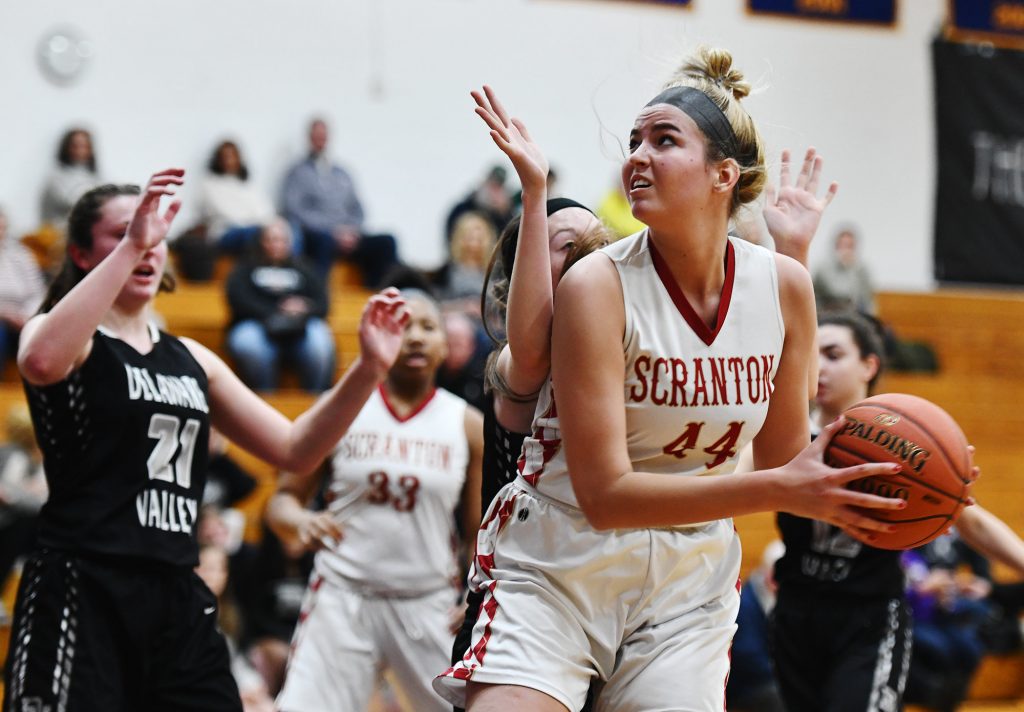 HS BASKETBALL: Beyond the court, Mulderig gives her all for others

At 6-foot-3, Colette Mulderig draws a lot of attention on the basketball court.

Appropriate for a 1,000-point scorer and 1,000-rebound performer who recently accepted a full scholarship to play basketball at Division II Franklin Pierce University in New Hampshire.

While the senior’s numbers on the court were outstanding, there’s something else she does that her peers and teachers find more impressive.

Before the coronavirus pandemic closed down schools statewide, Mulderig would go out of her way to eat lunch once or twice a week with a group of special needs students at Scranton High School.

“Colette does nice things and she doesn’t know she’s doing it,” said her basketball coach, P.J. Hughes. “She’s always involved in things like that. She doesn’t seek credit.

Her older brother, Nick, was diagnosed with autism at a young age, and Colette developed a level of empathy that has her considering a path in special education, and understanding that doing the right thing is its own reward.

“It was always me and him,” Colette said of her relationship with her brother. “We developed a really close bond. I think I’ve learned to understand it more and not treat people with disabilities as anyone different.

“They’re all the same to me. I think it was a lot easier for me to grow a bond with them. We all just really get along.” 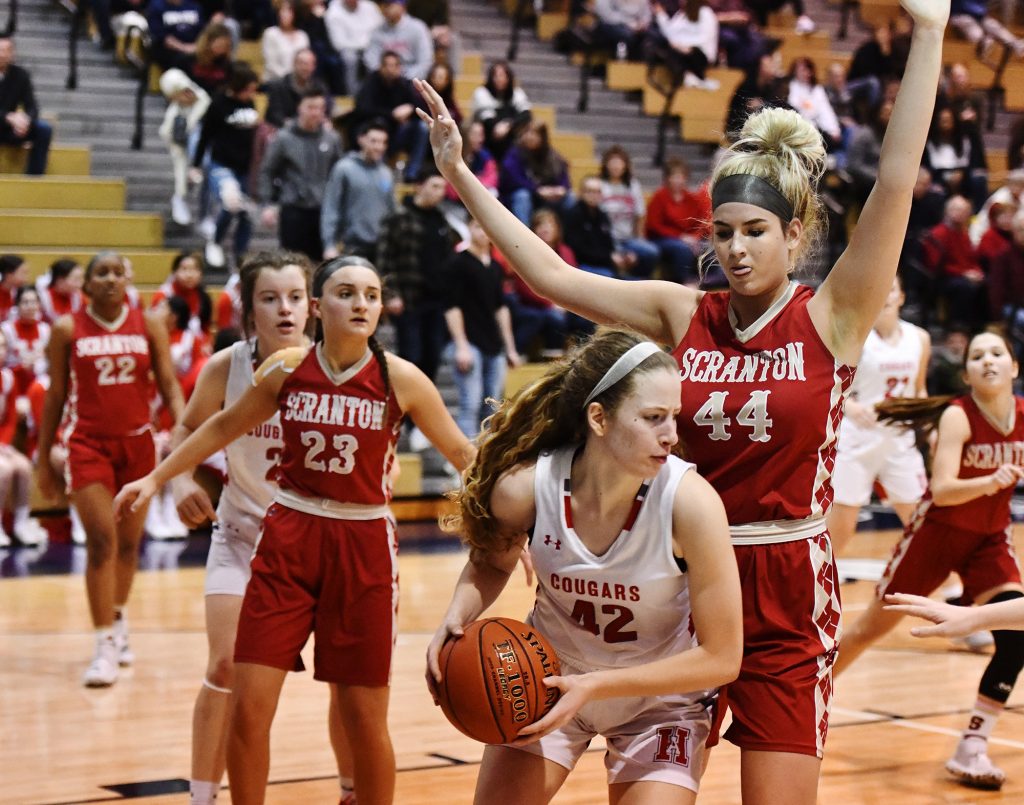 Throughout high school, Mulderig shared classes with kids with special needs. When that stopped this year, Mulderig felt compelled to retain the bonds she had formed by being their lunch buddy.

“I grew really close to them through gym, because that was the class I would typically have with them,” Mulderig said. “I just noticed they were not in my lunch period this past year because I didn’t have gym with them this, my senior year. I would see them in the hallway or walking past to class.”

Colette decided sharing a meal with them was just as important as spending time with her other friends.

“My brother went through there so all the teachers know who I am because of him,” Colette said. “Their helpers are very appreciative. I have lunch with (the students) once or twice a week and I try to see them as much as I can.

“It’s hard because I really don’t have class with them.”

No matter what she does, Mulderig stands out, both because of her stature and her athletic prowess. She realizes she might be setting an example for others to follow, but she’s not doing it for that reason.

“I’m not trying to do this for recognition, for someone to say, ‘Oh, you’re a good person,’ ” Colette said. “They’re all very thankful because they’re all usually stuck together. They just want to be like normal people. I just try to push that because they are normal people. It’s just harder to live up to social expectations in a way.”

Harder to have a typical conversation, not to be dismissed because it might take longer or be more difficult to express a thought or idea, or to be accepted in a group.

“My mom always told me, don’t ever let anyone make fun of your brother or treat him badly,” Colette said. “I don’t know if it was just back then, but everyone is really good with them. Of course, you’ll get some with snarky remarks, but for the most part, everyone is good with them.” 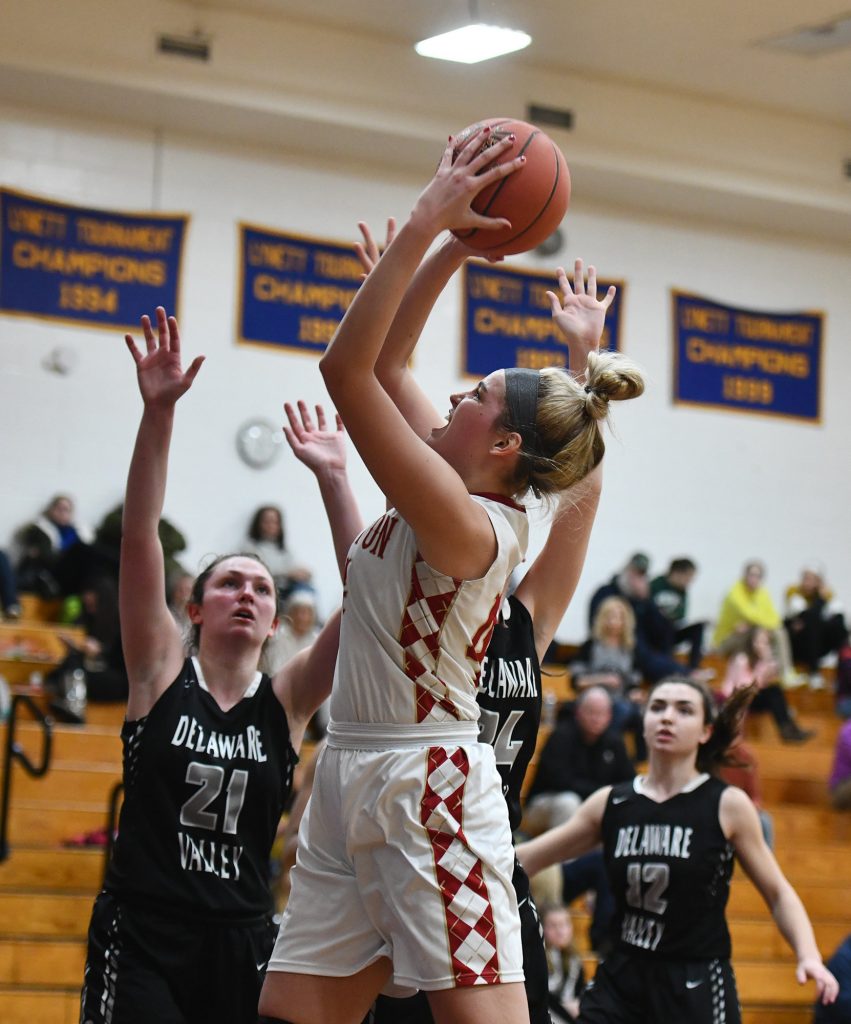 Because of her experiences at home, she understands how difficult it can be for an atypical teenager.

“My brother is different from other people,” Colette said. “He gets upset more easily, and he is more sensitive. He wants friends. It’s upsetting, because that’s all he wants is to be socially where a typical person is.

“I just feel it’s important for me to help them feel as normal as they really are. Sometimes people forget that they are human, and it’s not fair to exclude them. It’s really upsetting. I don’t want anyone else to feel like that.”

Hughes sees her compassion as part of her DNA.

“It’s one of those things that is a part of Colette,” Hughes said. “It’s what she does. She does these things. That was always the thing about this senior class and Colette. They were always really good people. I could never be mad because they were always trying, always doing what we asked them to do. Sometimes they didn’t work out, and sometimes they did.”

When Mulderig dislocated her patella over the summer, it could have spelled the end of a great career. Instead, she did what she could, coming back well below full strength for the same reason she gives it her all to be a good friend over the lunch hour.

“She didn’t ask anyone to praise her for coming back from that knee injury,” Hughes said. “Obviously, we would have not been the same team without Colette Mulderig. She came back for us. She could easily have wrapped it up and said, I’m going to wrap it up and rehabilitate and get ready to go play college basketball.

“She came back for us. She does things for people. She’s bigger than herself sometimes. That’s an awesome part of her.”