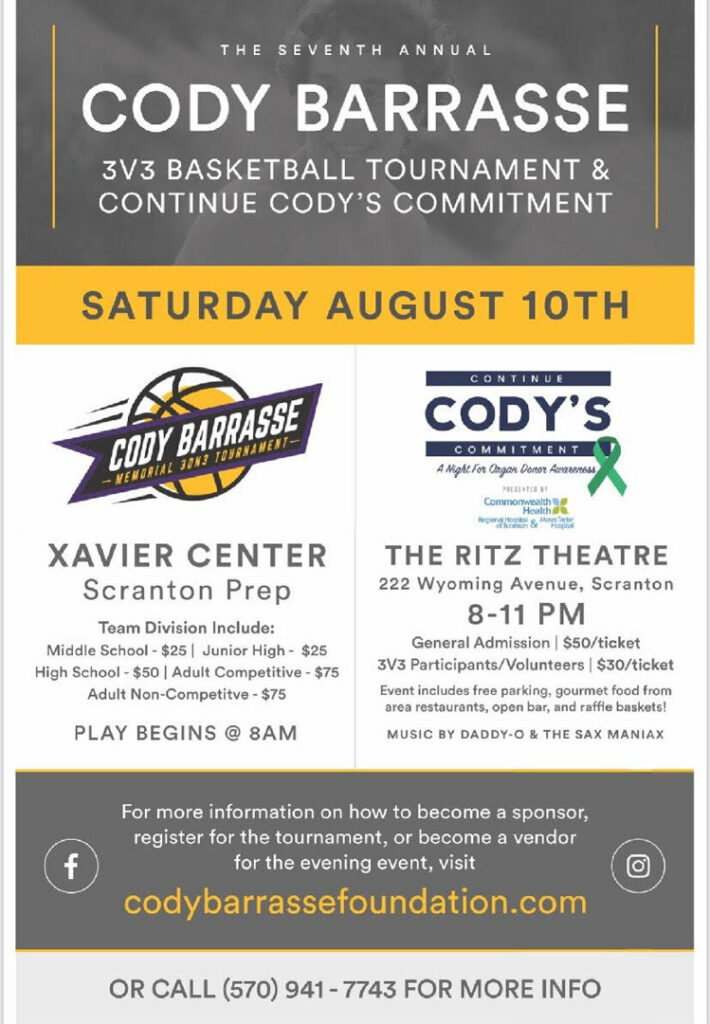 Next week, the Cody Barrasse Tournament will take place at Scranton Prep’s Xavier Center at 8 a.m.

Then, there will be a reception at The Ritz Theatre on 222 Wyoming Avenue from 8 p.m. to 11 p.m. to continue Cody’s Commitment and celebrate a “A Night For Organ Donor Awareness.”

Cody Barrasse, you may remember, was a 2009 Scranton Prep graduate and former football player, died in an accident in Pittsburgh in 2013.

His friends, and the Scranton Prep community, organized this event to honor his memory and show the kind-hearted young man he was before his tragic death. And to continue to spread his generosity.

The Cody Barrasse Foundation started and it’s mission is stated on the organization’s website. 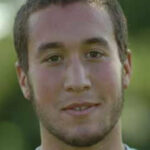 On April 7, 2013, the Scranton Prep Community lost one of its most unique and gifted members. Cody Barrasse, a member of the class of 2009, was our classmate and dear friend. We will always remember his fighting spirit, his generosity, his sense of humor, his love of life and his ability to put the needs of others before his own.

Here is a story by Marty Myers as to why this event is so crucial:

He won’t be here in person, but Bill Vance will carry with him more than just the spirit of Cody Barrasse when the seventh annual Cody Barrasse Memorial Foundation festivities tip off Aug. 10 at Scranton Prep’s Xavier Center,

Vance, a 71-year old Pittsburgh area roofer, is one of eight people whose lives are possible — or better today —because of the donation of Cody’s organs after he died tragically in April, 2013, after being struck by a car in Pittsburgh.
“It means the world,” Vance said of the foundation’s seventh annual event, which includes the 3-on-3 basketball tournament at Scranton Prep, and the evening festivities that follow at the Ritz Theater on Wyoming Avenue in Scranton. “He saved my life. I’m very thankful for his whole family.”
Vance received both of Cody’s lungs in a transplant shortly after the tragic accident.
And while 66-year-old Bob Warfel of Madison Twp. didn’t receive one of Cody’s organs, he and his wife Marlene are grateful for what the foundation has done with its Organ Transplant Assistance Program (OTAP), offering financial assistance to families in Lackawanna County who are awaiting an organ transplant, like the new heart Bob received two days after Thanksgiving.
The basketball tournament combines two things — Cody’s love of competing and a good game of pickup basketball, and helping others.
But as popular as that event is, it’s only part of the focus of this year’s fundraising effort.
The transplant assistance program will be the big benefactor from the evening event, Continuing Cody’s Commitment, which runs from 8-11 p.m., and will feature the music of Daddy-O and the Sax Maniax, as well as light fare from small businesses and restaurants across Northeast Pennsylvania, and beverages. Cost is $50, and $30 for basketball tourney participants and volunteers.
OTAP was founded Feb. 9, 2018, the anniversary of Cody’s birthday, the goal of the which is to promote awareness for organ donation, and to provide help to those awaiting a transplant.
“It was just life-saving to tell you the truth,” Marlene Warfel said. “We had been going back and forth to Philly at that time for over a year. Just the gas and the tolls alone were astronomical.
“We were going down every week, every two weeks for almost a year. That was very costly.”
That’s when local cardiologist Linda Barrasse stepped in and told them of her son’s foundation and that they would like to help out the Warfels.
“We’ve never turned down anyone in need of a transplant,” Barrasse said.
The Warfels had no idea help was available, but Marlene considers it one of the many blessings in her life.
Those first started in 1981 when Bob underwent a sextuple bypass surgery, a result of his uncontrollable cholesterol levels. It wasn’t revolutionary, but certainly not a common surgery at the time. In 1999, he had another coronary bypass surgery, when doctors told him he probably wouldn’t be able to undergo a third bypass.
And last year, the Barrasse Foundation jumped in, with the family able to use the money it was gifted for the numerous trips to and from Philly before and following the transplant. The grant also was used to help defray some of the cost of medications.
“It was a lifesaver because everything just kept going on credit cards because my husband and I are both on disability,” Marlene said. “We just never expected anything like that. It’s a blessing but to think what her family had to go through. But also (Cody) helped so many people, too, with all his organs. I just don’t know if people realize what a blessing it is.
“I’ve been an organ donor for at least 30 years. Why are you not helping someone else with the gift of life? We are blessed. Someone always seems to be there to give us guidance in the right direction. Like I said, for Dr. Barrasse, we are so thankful for her and the foundation.”
So is Vance, who stays in contact with Barrasse, calling her two or three times a month.
“I’m sorry I couldn’t have met Cody but he’s on my mind every day,” Vance said. “His mother said me and him had the same disposition.
“I think it’s a wonderful thing to donate. It saves a lot of people’s lives. It’s very, very important. I never thought about being a donator until it happened to me. My wife is a donator. My daughter is a donator. I never thought about it that much until I had to have one.”
The 10-division, 3-on-3 tournament starts at 8 a.m. and players get lunch, a T-shirt and are guaranteed three games.
To register for the tournament, for information on how to donate or to fill out an application for OTAP, visit codybarrassefoundation.com. 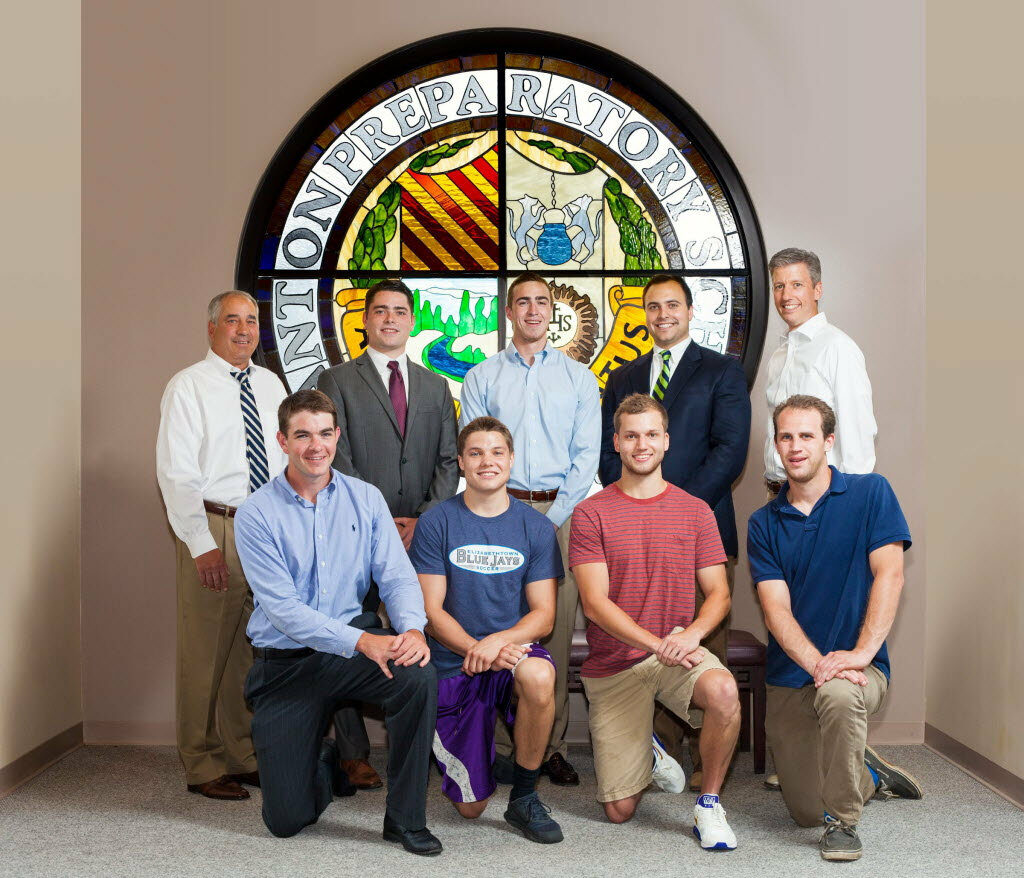 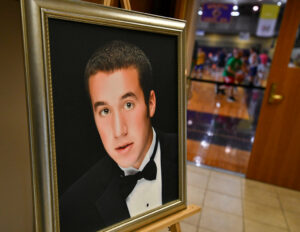 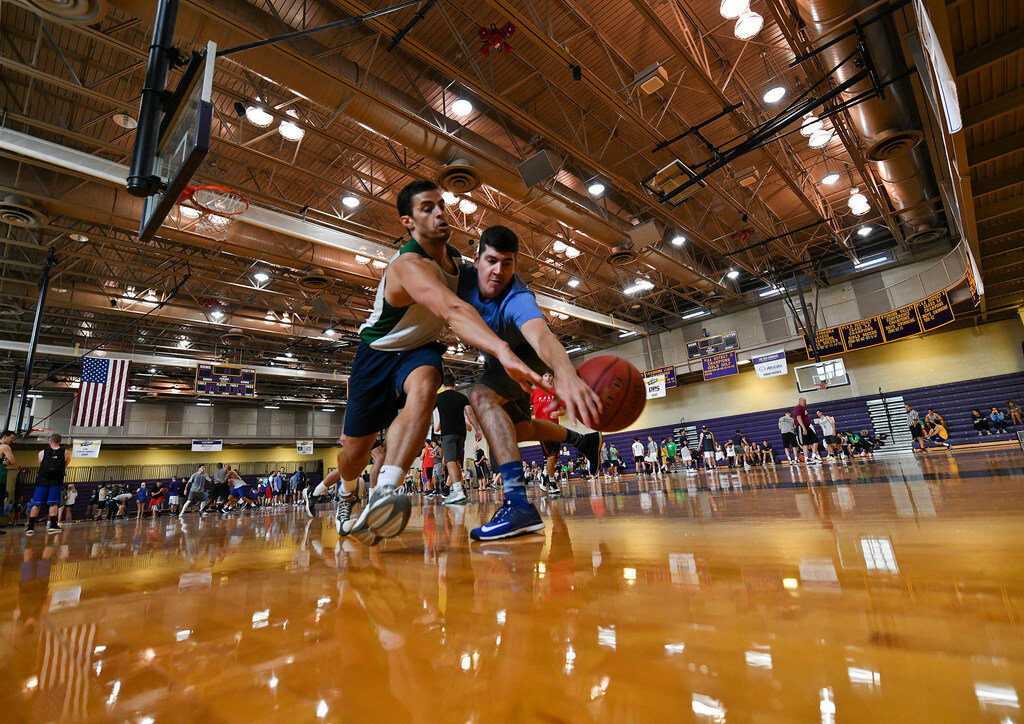