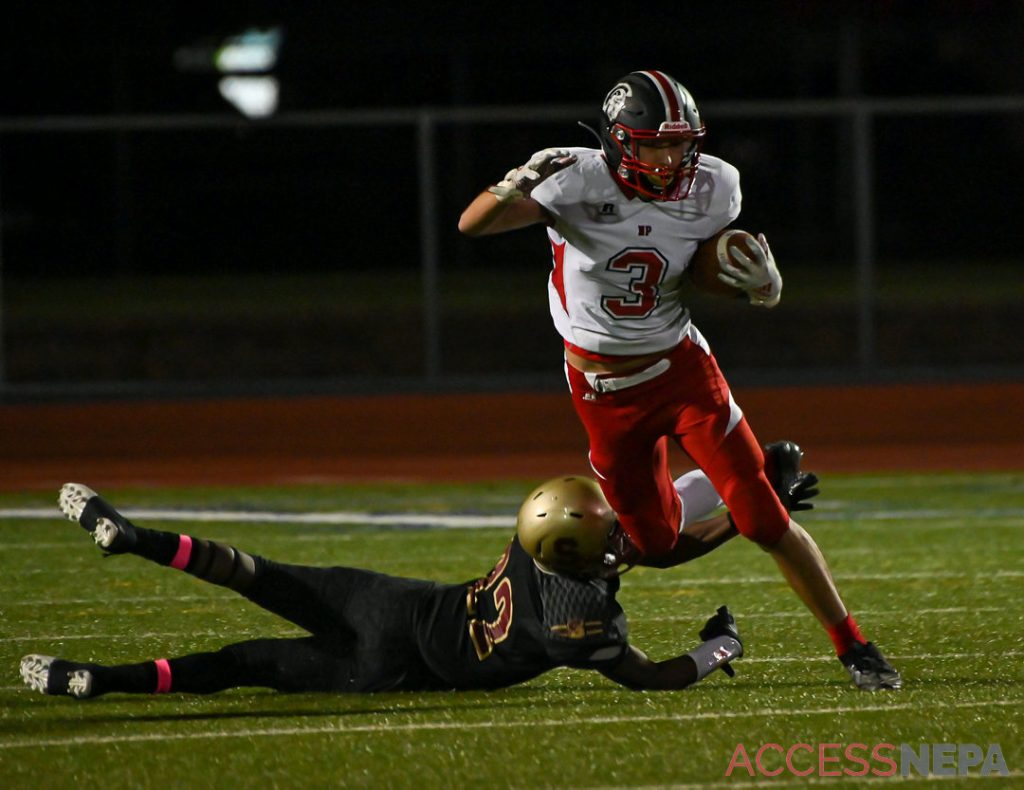 Football without fans is ‘weird,’ and players will need to adjust

North Pocono played the first half of its first game in about 11 months Friday night about as flawlessly as one could expect.

The Trojans forced a turnover on Scranton’s first drive and turned it into a score. They turned a three-and-out into a fast touchdown. They thwarted a long Scranton drive, then finished off an efficient, effective, energetic drive of their own to take a 20-point lead on the way to a 27-0 win.

There were some in Memorial Stadium who weren’t all that impressed with any of it.

“Get it together, guys!” someone yelled, clearly frustrated. “Jeez! Come on! Get a touchdown!”

The voice cut through the chilly early fall night like a running back hitting a gaping hole, and a guffaw rolled through those few of us watching the game from the bleachers at the historic and expansive field. It didn’t take much investigating to figure out where the blunt words of encouragement came from.

It came from one of the Knights’ cheerleaders. Pretty obvious, considering they were just about the only ones there.

They can give us football on a cool Friday night, and in a few weeks, they’ll give us Big Ten football from some of the largest sports stadiums in the nation. But outside of hard hits and scintillating runs, outside of box scores and standings, there’s really nothing normal about it.

What happens on the field is great. The atmosphere generated from the stands is just as crucial. While we can debate for hours and days and weeks whether there could be more fans allowed in stadiums than there have been — Scranton High School clearly tried to adhere to Gov. Tom Wolf’s mandate to limit outdoor gatherings to just 250 people, and a mere handful of them were Knights fans, if that many — the reality is this is how it’s going to be.

There’s going to be football.

But there’s not going to be a football atmosphere.

And for players, there’s going to be an adjustment to that competitively.

It had to be weird, too, for high school players around the Lackawanna Football Conference who finally opened their seasons Friday.

There were things that happened you don’t normally see or hear, even outside of a cheerleader not putting up with a slow start.

During pregame preparations at Memorial Stadium, the couple dozen people sitting in the stands on the opposite side of the field could clearly hear North Pocono players hyping themselves up outside their locker room.

On his 29-yard kickoff return in the first quarter, it was hard to miss the sound of Scranton’s Charlie Thompson exhaling as he steamed to the 30-yard line.

Also heard something else maybe one might not expect with so few people outside of the players, cheerleaders, band and coaches in attendance: Actual atmosphere.

Players from both teams, especially at the beginning, were extremely vocal. It continued throughout the game, especially on the North Pocono sideline because, of course, the Trojans were winning and playing very well.

“I think we were just excited to be playing football,” Trojans running back Sam Smith said. “We were excited to be out there, and I think that created a lot of energy.”

Bottom line is, we have football back. As long as it can be done safely, at least.

But football will continue in a way it has never had to before and, hopefully, never will have to again. As it does, it’s worth wondering how teams will try to generate their own kind of energy in high school venues, where fans and family and friends have typically been charged with doing that for the players.

Nobody knows, long term, how that’s going to work out, and maybe nights like Friday — when teams were riding high on the opportunity to play they didn’t necessarily think they’d get — aren’t going to be indicative of how difficult that will be.

“Most coaches are doing it now: Build your own enthusiasm, play hard and play for each other,” North Pocono coach Greg Dolhon said. “Now, again, I think when you’re making plays and things are going your way, players tend to be a little more enthusiastic. But I thought our kids played with great enthusiasm, and you know what? They’re going to have to find their own (atmosphere), because (fans) are not going to be there.”

Football with no fans is weird.

But North Pocono may have provided a bit of a blueprint to how to overcome it: Value the opportunity. Grasp the reality. Be loud.

And, by all means, get off to fast starts.