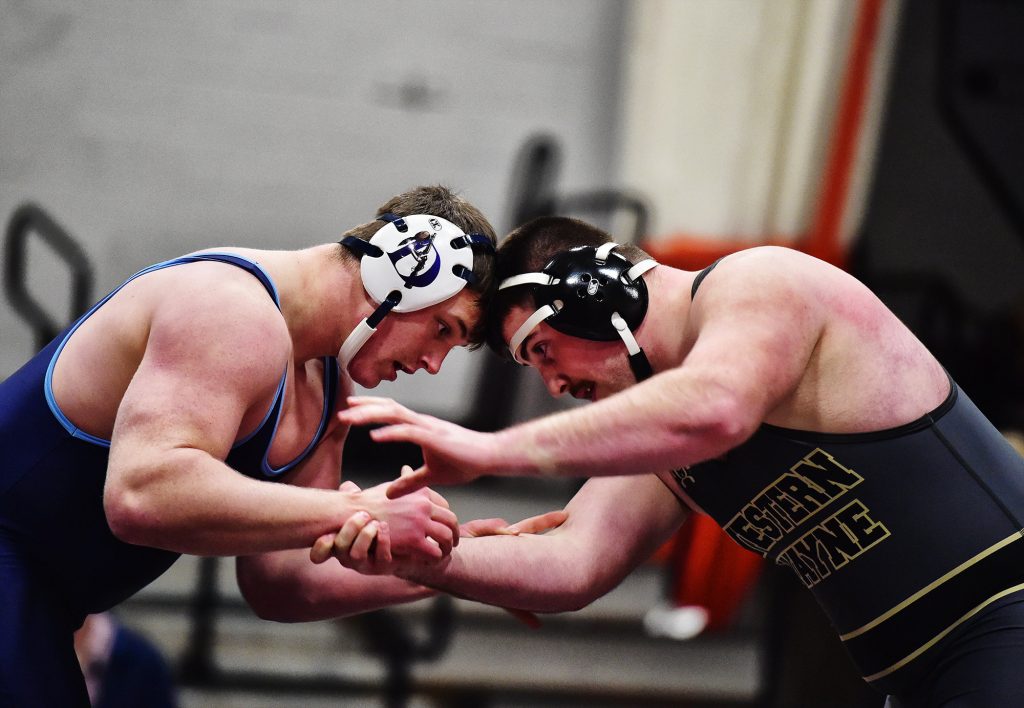 The individual postseason kicks off Friday at 5 p.m. with the District 2 Class 2A and 3A championships at Hazleton Area High School. Click here for the pairings. It should be a pretty fun tournament with a lot of great matchups. Here’s a few things to look for this weekend: 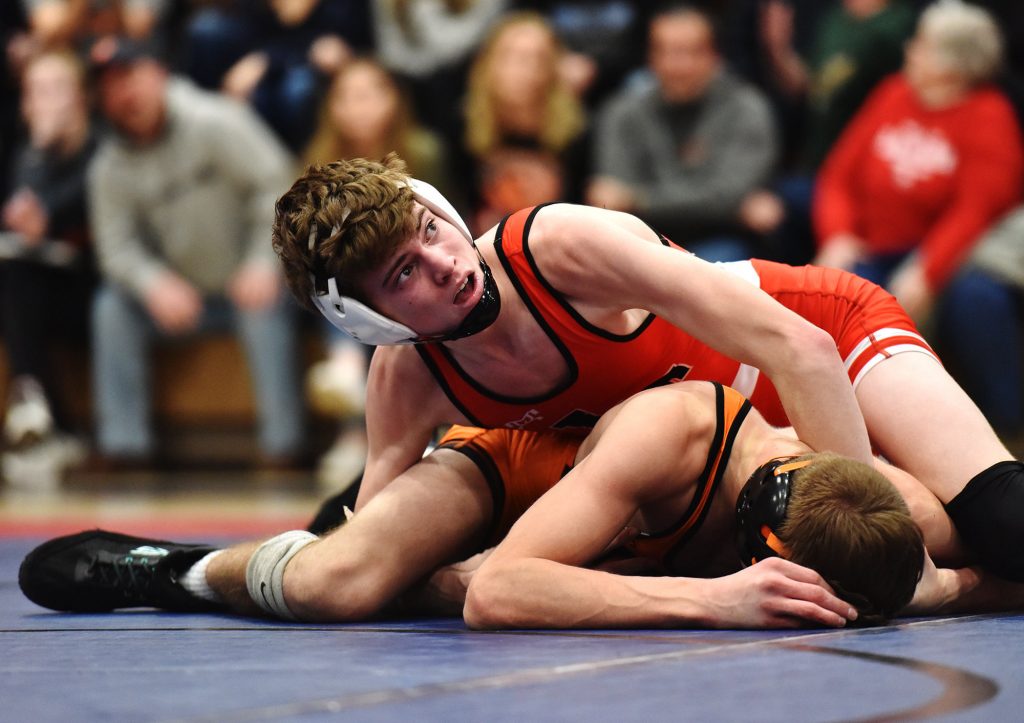 Lackawanna Trail had a breakthrough season with a group of freshmen who helped the Lions dominate Lackawanna League Division II and finish second in District 2 at the team championships. We’ll see if that translates to the individual postseason.

Sophomore Michael Bluhm (132 pounds) is the only top seed for Lackawanna Trail. He is a defending district champ, winning last year at 113. The No. 2 seed at 132 is Scranton Prep’s Antonio D’Apollonio. If they meet in the final, he’ll be a tough out for Bluhm to capture a second straight crown. They did not go head-to-head during the season.

At 106, freshman Max Bluhm is the three seed in a tough weight class. Tunkhannock’s Owen Woods is the top seed. Max Bluhm lost to him by a 5-0 decision at the District 2 team championships. The No. 2 seed Wyoming Area’s Jaden Pepe beat Woods by a 2-0 decision earlier this season. Max Bluhm hasn’t faced Pepe this season. 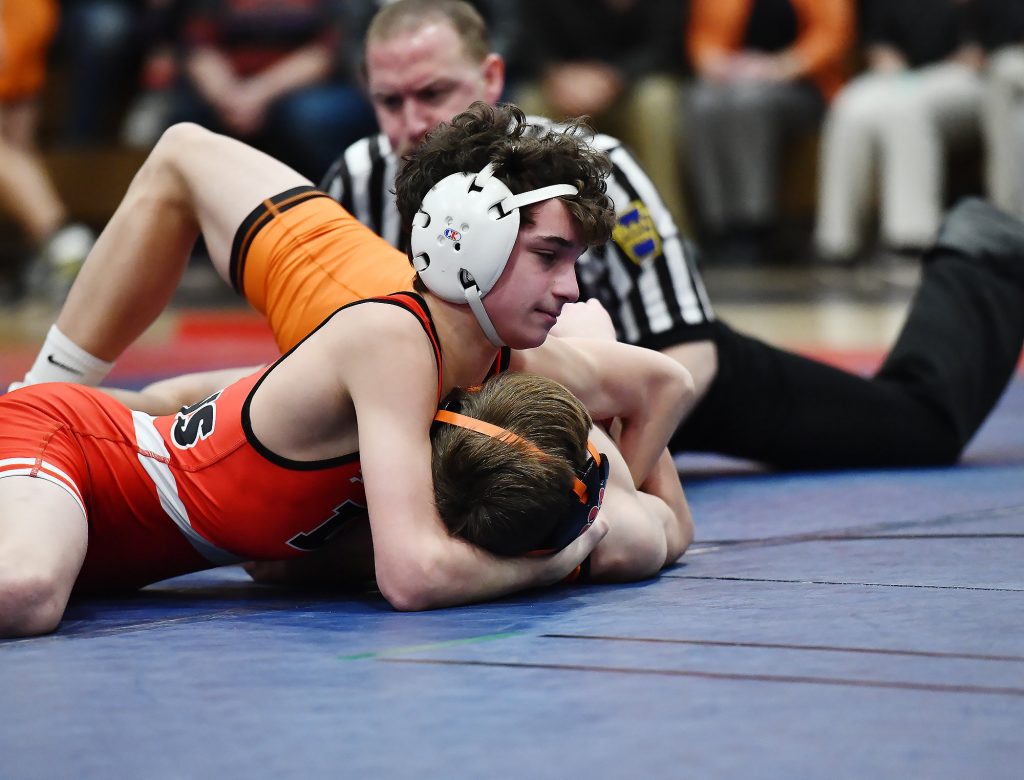 At 113, freshman Deegan Ross is the No. 2 seed and Hanover Area’s Cael Davis is the top seed. The two have not faced off this season, but they were both at the Coal Cracker Tournament in January. Ross placed fifth, while Davis placed fourth.

At 120, freshman Ethan Lee won a Lackawanna League championship and is the No. 2 seed. He may have to face No. 1 seed Hanover Area’s Joe Rowley (a state qualifier) in the final.

At 126, freshman Robbie Schneider is also a Lackawanna League champ and is ranked 24th in the state according to PA Power Wrestling. However, he is only the No. 2 seed as regional champ and state qualifier Dave Evans secured the top seed. 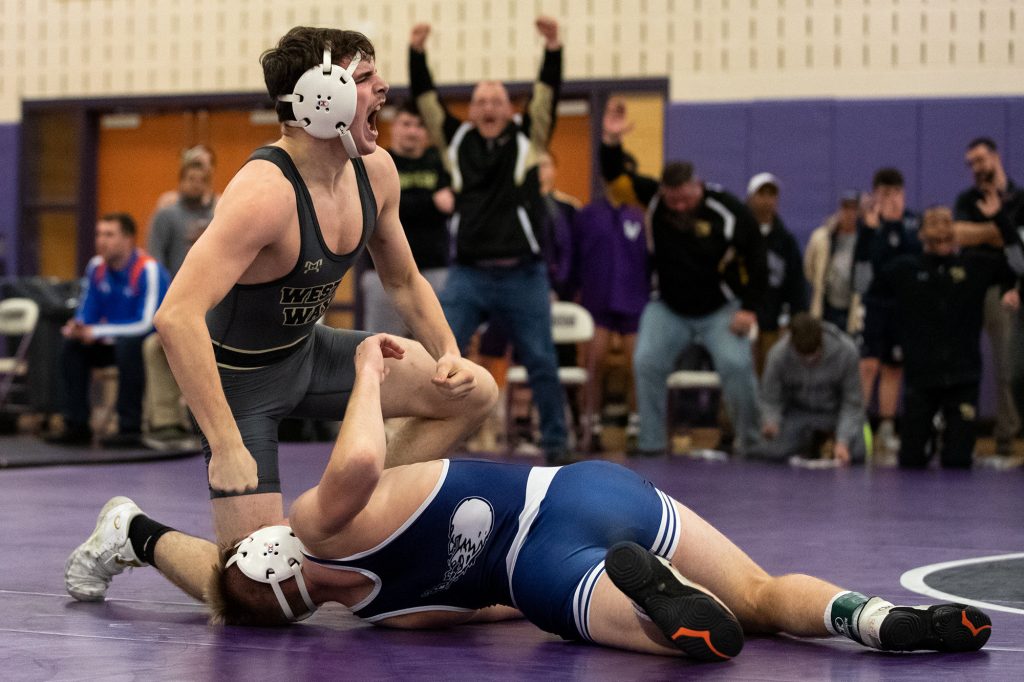 Junior Matt Leslie (152) and senior Jack McAllister (285) stepped it up this season. Leslie has been almost untouchable with a 36-3 record, a Lackawanna League title and a Tunkhannock Holiday Tournament crown. He is ranked 15th in the state according to PA Power Wrestling and won a district championship as a freshman. I don’t see anything stopping him from capturing another.

McAllister bounced back from an 8-11 season last year and is 30-5 this season. He won a Lackawanna League title and placed second at the Tunkhannock Holiday Tournament. He’s pinned the No. 2 seed in 30 seconds earlier in the year. Because of only six wrestlers in the weight class, he won’t have to wrestle until Saturday’s semifinal. 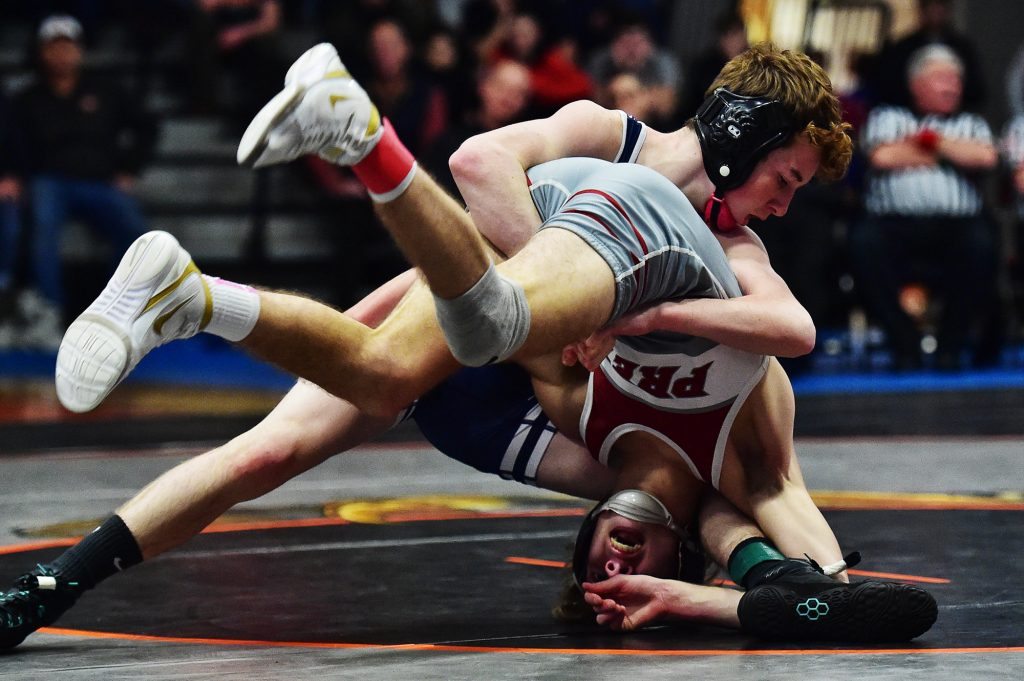 At 106 in Class 3A, No. 1 seed West Scranton’s Austin Fashouer (Ranked No. 16 in the state according to PA Power Wrestling) and No. 2 seed Delaware Valley’s Zachary Jacaruso (Ranked No. 8 in the state according to PA Power Wrestling) have had great seasons, but haven’t faced off. Fashouer has wrestled a lot of the season at 113. He is one win away from 100 career victories. He has a Lackawanna League title at 113 and a Tunkhannock Holiday Tournament crown. He also placed second at the Jarvis Memorial Tournament. Jacaruso placed second at Escape the Rock and the Bethlehem Holiday Classic. When the Invaders faced the Warriors during the regular season, Jacaruso earned the winning pin in the last match to give Delaware Valley the victory in a match that pretty much determined the Division I title. 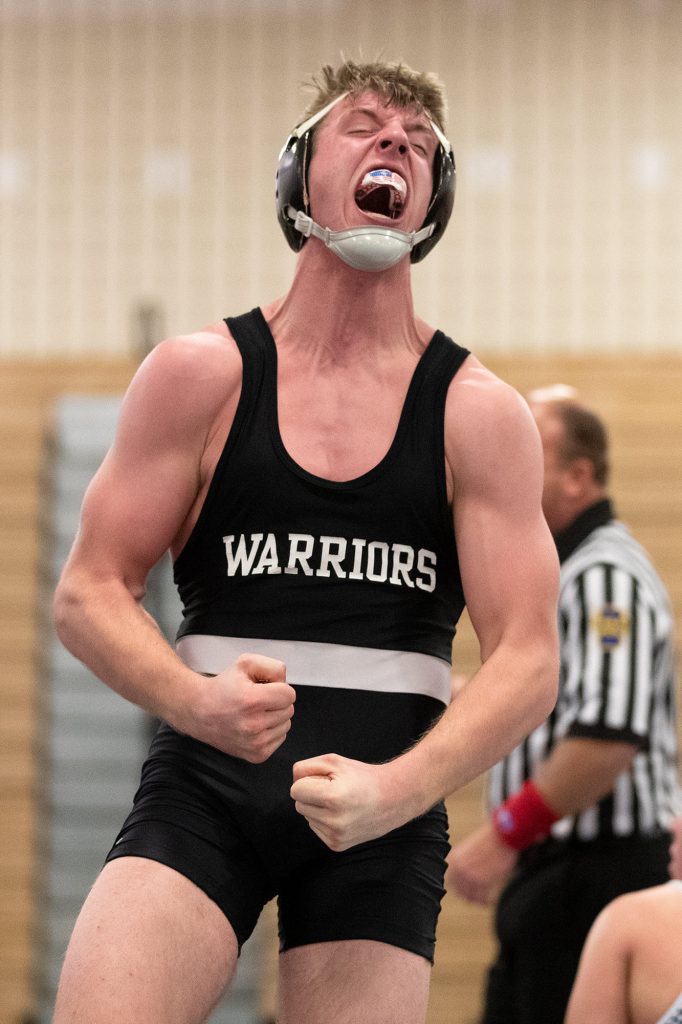 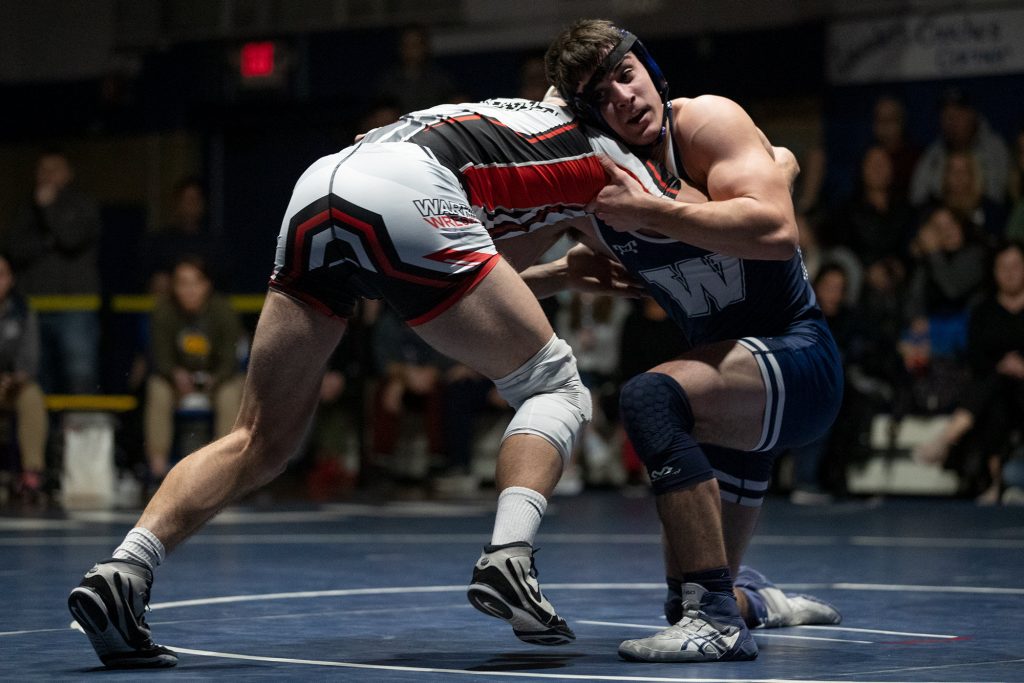 The two faced off during the regular season and it was quite a battle. Henderson took an early lead with a takedown, but Butka rallied to tie it with a takedown of his own. They entered the third period tied, 3-3. Butka chose down and Henderson put them in neutral, giving Butka a 4-3 edge. Henderson took his shots, but he couldn’t get the takedown.

After a 24-15 season last year, Butka is 37-0 in 2019-20. He also has Lackawanna League, Tunkhannock Holiday Tournament and Jarvis Memorial Tournament titles and victories over state-ranked opponents.

Injuries plagued Henderson at the beginning of last season before he rallied to make states. This year he is 32-6. He has a Lackawanna League title and Bethlehem Holiday Classic crown, and placed fourth at the Cumberland Valley Kickoff and Escape the Rock. 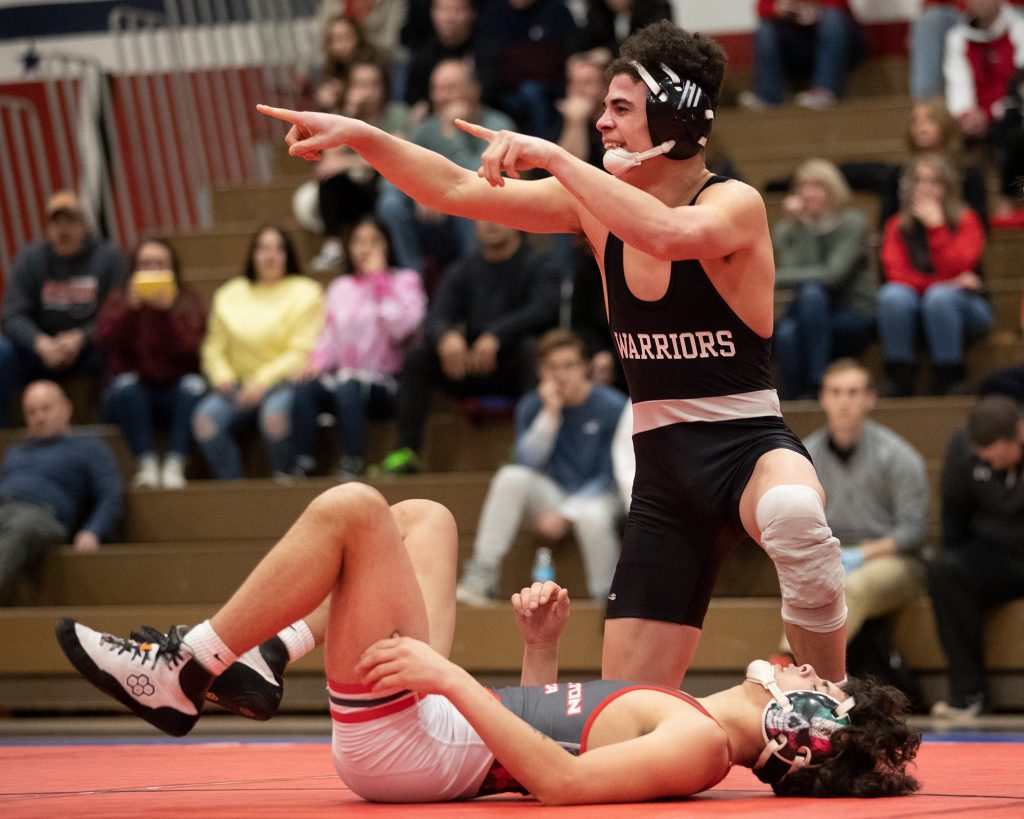 Delaware Valley’s Preston Machado, the No. 1 seed at 132, has faced No. 2 seed Wilkes-Barre Area’s Nino Cinti in the semifinals of the District 2 Class 3A team championships. Machado topped him by an 8-2 decision.

At 145, Pittston Area’s Jimmy Spindler, the No. 1 seed, edged No. 2 seed Delaware Valley’s Jay Shauger by a 2-1 decision in the quarterfinals of the team championships. 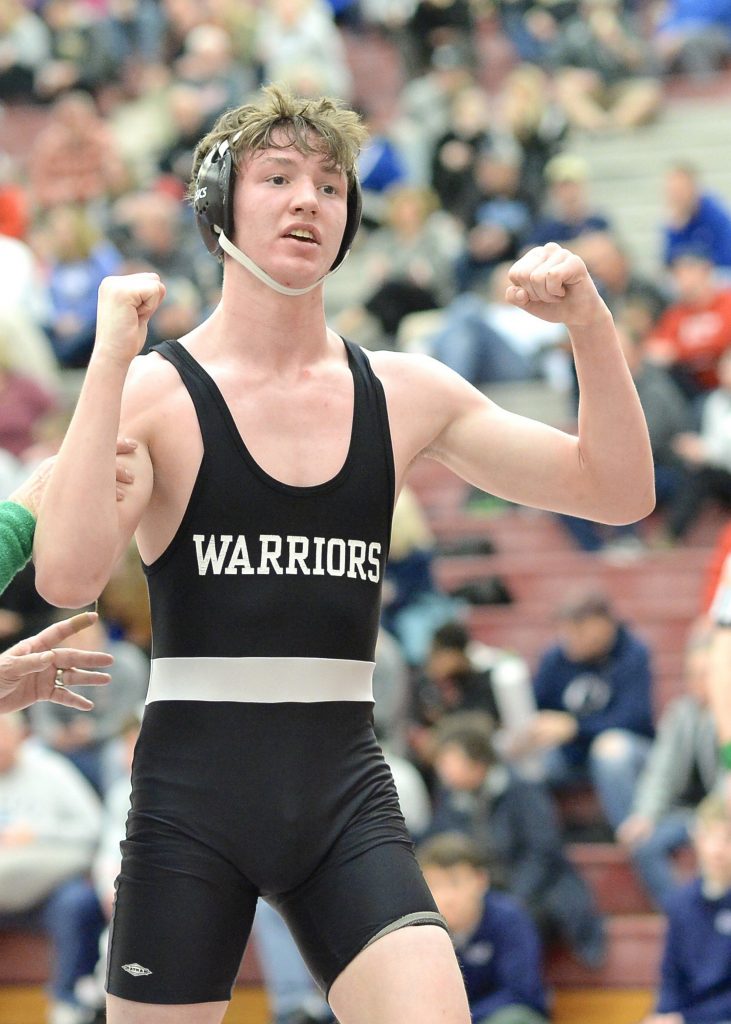 At 170, Delaware Valley’s Gavin Brazanskas is the No. 2 seed. Two years ago, he went 5-18. The next year he won a district title at 160. It’ll be interesting to see what he can accomplish this postseason. He’s proven the sky’s the limit.