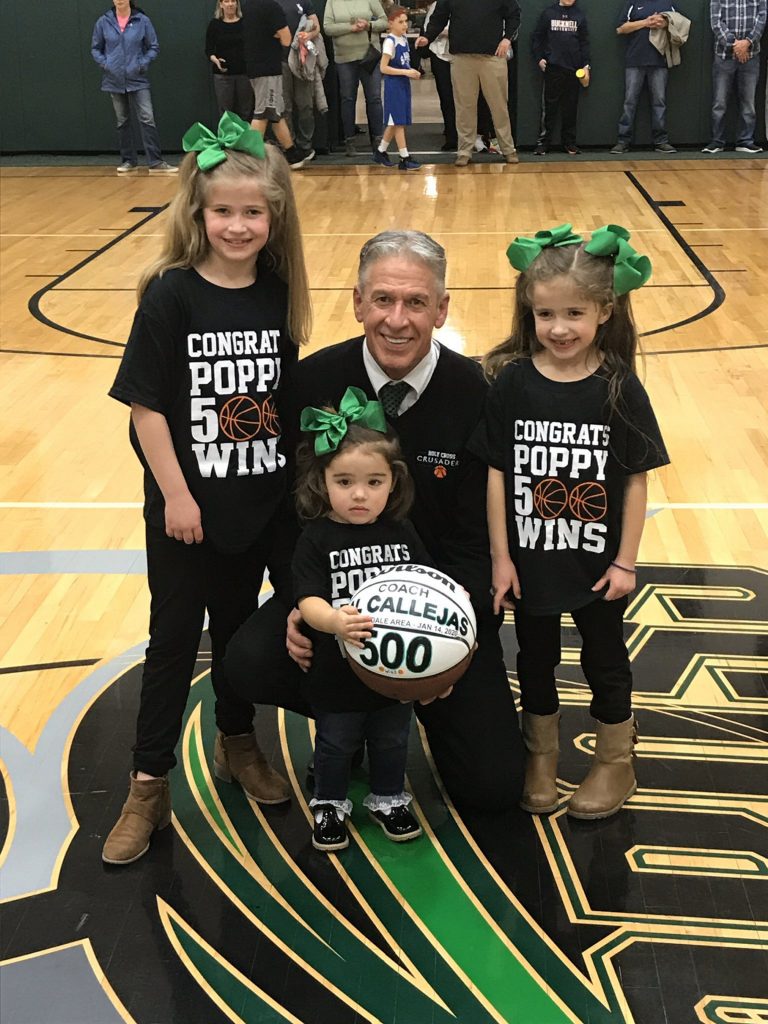 It even choked up the often fiery and intense longtime leader.

“It is a reminder for me of how lucky I am to have the support of my family, the administrators, the parents, my tremendous assistant coaches and most of all the great players I have been able to coach,” Callejas said.

“Nobody does something like this alone. You have to break each win down to 1,000 pieces and a lot of people play a part in earning these wins.”

“This is great for him,” Caleb said. “He deserves it more than anyone. He puts so much time into coaching this program. He does everything for us, he prepares us so well by watching so much film.

“We really wanted to go out and do this for him.”

His devoted family, wife, Kim, sons, Al Jr. and Connor, and daughter, Brooke, and grandchildren, were also on hand, making it a special night.

Following the game, Callejas couldn’t fight back tears when he viewed a video of thanks from current and former players at a ceremony in the high school auditorium following the triumph, his son, Al Jr. said.

“He is a great dad and wonderful grandfather, and, yes, he has a soft side,” Al Jr. said. “We put together that video and what struck me is that every single player, guys from his first team at Bishop O’Hara to his current team, expressed what he has meant to them off the court. He is loyal to every single one of them when they play here and it doesn’t stop when they are 18 and they graduate.”

Callejas began his coaching career at Bishop O’Hara in 1992-93 and installed a formula that stresses tenacious defense and sharp execution.

He led the Bruins to the PIAA Class 1A championship game in 1995-96 with his son, Al Jr., being the catalyst as a sharp-shooting guard.

“I feel I am much more appreciative now than when I was an 18-year-old senior of how great a coach he is,” Al Jr. said. “Playing for him was at times tough because we are both such intense competitors. But, it really was the best thing for me. Now coaching with him, I see so much more. I see his method and his philosophy and his preparation. I understand why he does things the way he does.

He is a two-time Class 2A State Coach of the Year. The first came after the 2011-12 season and again after the 2017-18 season, both times he led the Crusaders to the PIAA Class 2A semifinals.

In 2012-13, Holy Cross played in the Class 2A state final where it lost to Beaver Falls.

For four years, his son, Connor played point guard for the Crusaders during those deep playoff runs. An All-Region standout, he played a major role in 92 wins.

“From the first day I got to play for him, and I’m sure Al Jr. would say the same, we looked up to him,” Connor, 24, said. “I am so thankful to have him as a dad and also as a coach. He is a fiery guy, but off the court, he does so much for his former players.

“That’s what is most meaningful to me. I am so proud to be a part of this program he built.”

Kieran Burrier, a senior who recently earned his 1,000th career point, remembers trembling at his first practice having heard how exhausting it could be.

After three straight district titles, and this season’s Lynett Tournament championship, he values his coach’s demands.

“Playing four years for coach has been an honor for me,” said Burrier, who was the Division III Player of the Year last season. “My freshman year, I was scared out of my mind. He is a tough coach, but it’s out of love because he cares so much for us. He wants us to be the best that we can be. I am so happy for him to get this win. I know he doesn’t want the attention, but he deserves it.”

“I think if somebody wrote a movie script like this, people wouldn’t believe it,” Callejas said. “So many great things have happened for me. Both of my sons played for state titles in Hershey. I’ve had so many great players, teams coaches and seasons.

“I am just so truly blessed.”