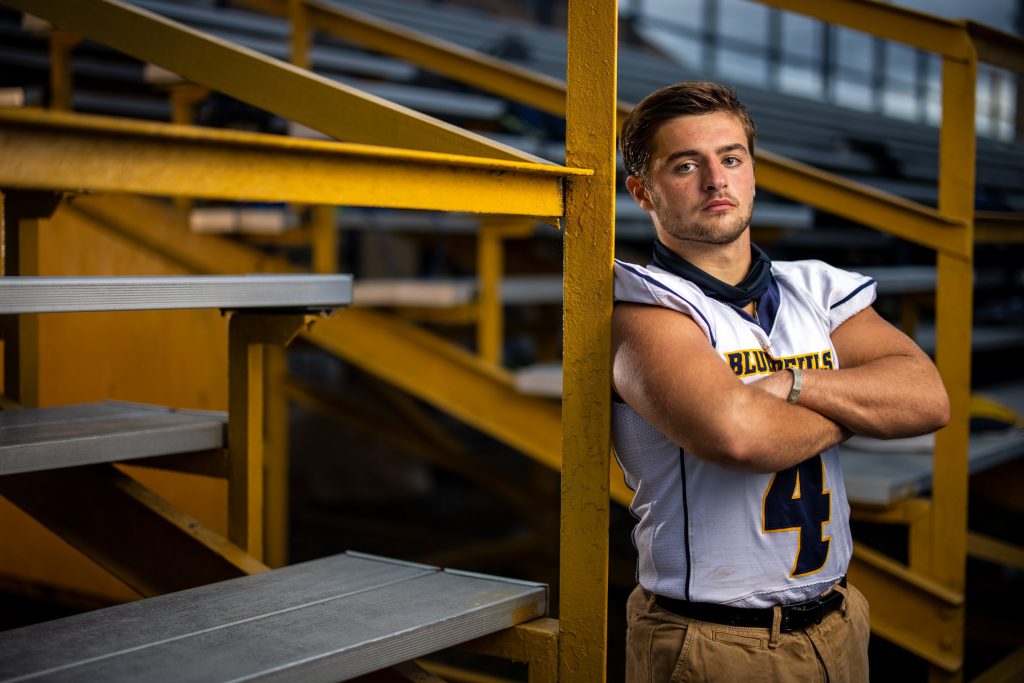 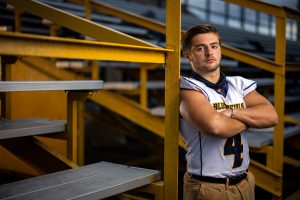 Old Forge senior Colin Holzman rushed for 199 yards and three touchdowns in a 36-33 loss to Steelton-Highspire in the PIAA Class 1A quarterfinals.
Age: 18
Family: Mother, Brenda; father, Brook; sisters Corianne and Cabrina; brother, Casey.
Favorite sports teams: Tennessee Volunteers and Philadelphia Eagles.
We don’t encounter a lot of Vols’ fans. What was the attraction? I went down to Knoxville when I was like 11 or 12 and I liked it down there.
Is there an athlete you admire? Jorden Sekol. Growing up watching him and that whole 2013 team play all the way to the state championship was something that made me want to play football and always try to be great.
Throwing this number out there. In your four-year career, you averaged 7.3 yards per carry. That’s a pretty big number. I’m pretty proud of that.
Is it something you’ll look back on with pride years from now? Without a doubt. Just knowing that every time I had the opportunity to help our team out, I got the job done and just always found a way to gain yards and make it work.
Do you have any pregame rituals or superstitions? Nothing really. Every game I wear the same socks, since freshman year.
Are those about to be retired? No. Hopefully I’ll play in college and I’ll bring them with me.
Do you have an idea where that might be yet? I think I’m going to end up at Mansfield University.
Who’s been the biggest influence on your football career? It has to be Dan Holland, our linebackers coach. He’s taught me everything I know since freshman year on. The man’s unbelievable from starting in the weight room, strength and conditioning, to doing the right things. All linebacker techniques and just being a man, growing up and being a man.
Helping out younger players, is that something that’s kind of in your system that guys understand that hey, there’s a next generation coming behind me and I need to to be the guy to nurture those people? Yeah, the Old Forge football program has years and years of tradition. The best way to explain is the winning tradition and being the older guy on the team, the senior, you want to be the one to show the young guys what it takes and the effort, and the heart that it’s going to need to win these games.
It’s been a different year to say the least. What’s the biggest battle you fought because of the COVID pandemic? Just making sure everybody was at home and sacrificing their social life a little bit to make sure that we didn’t have any outbreak of COVID within our team and we did a great job of doing that.
Who’s your funniest teammate? Oh, Michael DiGregorio. I played with him since we were 5 years old and that’s always been my guy no matter what. I needed a laugh or cry, that was the guy.
Other than sports, what is one thing that you would like to learn to do in your lifetime? Learn to cook.
How about one dish in your house that’s served that you can’t live without? Chicken parm. I’m a big chicken parm guy.
Three people you’d like to have dinner with. Ray Lewis, LaDamian Tomlinson and Jorden Sekol.
How important was it for you as a senior to have a season, even if it only ended up being six games? It meant the world just to get that chance because, like I said, watching that 2013 game when I was in sixth grade, everybody dreamed of it from my grade to do what those guys did. The whole offseason, not knowing if we’d even get the chance to play, it was awful but it was a blessing to be able to play the senior season.
When you sit down to watch a college or NFL game, is there one player that you watch and try to emulate on the field? Blake Martinez from the New York Giants. I’m an Eagles fan but you watch the game, he’s always around the ball. I think he’s leading the league in tackles. He’s everywhere, that guy.