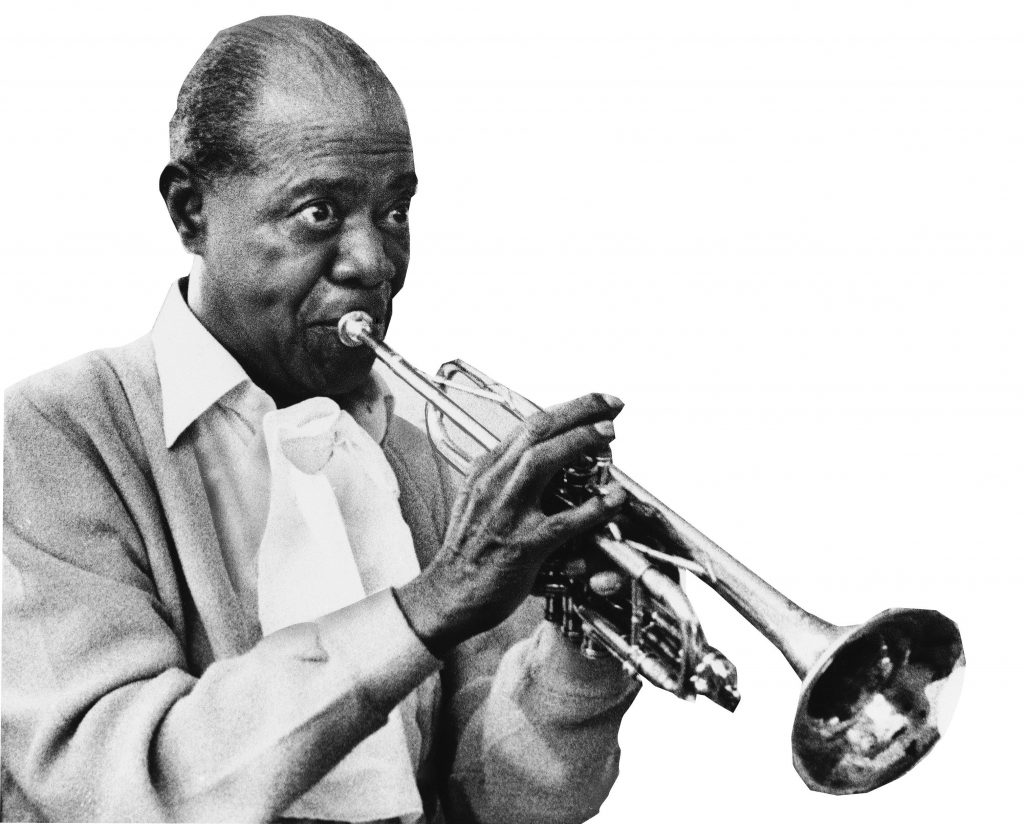 The announcer steps to the microphone in Muhlenberg College’s Memorial Hall and introduces a performer who already is among the most celebrated and influential of his genre.

“Let’s have a big hand now for Louis ‘Satchmo’ Armstrong!”

Armstrong takes the stage, greeting the audience of 4,000 with “What happen!” And his band, an equally celebrated lineup known as Armstrong’s All-Stars, kicks into the slow, appropriately titled “Sleepy Time Down South.” It lets Armstrong display his horn talent and raspy, grizzled voice — even some scat singing.

Sixty-three years ago Sunday, Louis Armstrong, by then already a jazz legend with a career of more than 30 years, performed at Muhlenberg in a show to benefit the recently revived Allentown Police Athletic League.
It was the artist near the top of his game, playing with a great band — and on a good day, to boot.

And for more than six decades, it has lived only in the memories of those who saw it.

On Nov. 29, ORG Music, a California boutique record company, will release a vinyl album, “Louis Armstrong & His All-Stars Live in 1956” — a near-pristine recording of the concert that even Muhlenberg and the Louis Armstrong House Museum in New York apparently never knew existed.

The album will be released as part of the 12th annual Record Store Day, which celebrates the culture of independently owned vinyl shops.

“I love that era of the All-Stars,” said Andrew Rossiter, chief executive officer of ORG Music. “It just sounds like a party. It sounds like they’re having a great time and they’re all great players.

“And the sound that they get with that small ensemble is massive. It kind of rivals some of the big band stuff you would hear. So I wouldn’t necessarily say it’s Armstrong at his best; I think you could make that argument for a handful of different periods. But for me, it’s one of my favorites.”

How the tape surfaced after 63 years — and was turned into a commercial album — is a story of the love of Armstrong’s music, but also one that leaves plenty of mystery in its wake.

Armstrong concludes the opening song with “Good evening everybody!” and segues into the popular 1950s tune “Blueberry Hill.” Between songs, he laughs heartily, and introduces “Tin Roof Blues,” saying, “We goin’ take a trip down to my hometown, New Orleans, Louisiana. … ‘Course, you know, folks, it was before my time.”

“No, no!” says someone else on stage. “Wasn’t nothin’ before his time!” as Armstrong laughs.

Armstrong is a favorite of Paul Roark, who from 1-3 p.m. Saturdays does a show on KUZU-FM 92.9 in Denton, Texas, that features music from the era of 78 rpm recordings.

Roark, 52, said he was searching the internet one night, which, as an avid collector of reel-to-reel tapes, he often does. On eBay, he saw a listing for a tape marked “Louis Armstrong concert Pennsylvania.”

Roark said the tape had been listed on eBay for a while with no offers, so he bought it for $9.99. He said it arrived in a generic box that he knew was of the 1950s.

“When I put it on and I heard the guy do the intro, I was, like, no commercial LP would have had that long of an intro on it,” he said. “So it’s got to be something different.”

“I figured it had to be when he was on TV that night and it was such a big deal,” Roark said. “If you look, that was two or three days before that concert.”

Roark found the exact date of the Armstrong show in a story in The Morning Call that matched other details, as well. “That was the only reference to it,” Roark said.

While The Morning Call and Muhlenberg’s student newspaper, The Weekly, both wrote advance articles on the show, neither reviewed it. Students were off that week for the Thanksgiving holiday.

Roark and Rossiter said even the Louis Armstrong House Museum in Corona, New York, wasn’t aware of the recording. “I don’t think anyone out there realized that this show was recorded and this tape existed,” Rossiter said. The museum did not respond to requests seeking comment for this article.

Roark said he got back in touch with the woman who sold the tape on eBay and asked, “‘How did you get this?’ And she said, ‘I just found it at a flea market or something, I don’t know.’ She was a general junk dealer, basically.”

It was the only reel-to-reel tape she had among the knickknacks she was selling on eBay, Roark said. “I certainly don’t think she knew what she had.”

Louis Armstrong is among the most popular jazz musicians of all time.

His career spanned six decades, with him first appearing on recordings in the 1920s as part of King Oliver’s Creole Jazz Band, and by the end of the decade as a solo artist, taking him from his native New Orleans to Chicago.

“He had such a long career, with so many peaks,” Rossiter, the ORG Music president, said. By 1939, Armstrong had a hit recording of the song “Jeepers Creepers” and, in 1949, “Blueberry Hill.”

By the 1950s, he had recorded eight of his 12 songs that eventually would be included in the Grammy Award Hall of Fame. But in that decade, his hits were more frequent, including “La Vie En Rose / C’est Si Bon,” which he performs on the tape.

“He was already a huge, huge name, kind of a marquee name in popular music — definitely in jazz,” Rossiter said. “He was the biggest name at that time.”

Armstrong’s second appearance in Allentown was the show captured on the tape. It came shortly before Armstrong had his biggest run of popularity, Rossiter said.

“Once you turn a corner into the ’60s, he’s more of a household name, whether you’re a music fan or not,” Rossiter said.

After a 1962 hit with a version of “Mack The Knife,” Armstrong recorded his biggest popular music song in 1964 with “Hello Dolly” from the Broadway musical of the same name. Armstrong’s version was inducted into the Grammy Awards Hall of Fame in 2001.

And in 1967 he released “What a Wonderful World,” which topped the pop charts and also was inducted into the Grammy Hall of Fame, in 1999. In 1968 he had his last hit, with a version of “Talk to the Animals” from the movie “Doctor Doolittle.”

During that time, Armstrong played a show in 1960 at Liberty High School in Bethlehem that drew just 350 people, likely because it was Easter weekend. He also played at Lehigh University in 1961 with Bob McClister’s orchestra at Grace Hall for 1,000 undergraduates and their guests.

A 1968 Morning Call article says Armstrong appeared in Allentown in 1962, but no record of the show remains. His last performance in the Lehigh Valley was in 1968 for 1,600 people at Memorial Hall in an event sponsored by the Allentown Junior Chamber of Commerce.

Armstrong died in 1971 at age 69. He was awarded a Grammy Lifetime Achievement Award in 1972. The Rock & Roll Hall of Fame lists Armstrong’s “West End Blues” among the 500 Songs That Shaped Rock & Roll.
The performer remained so popular that a version of his All-Stars played at Bethlehem’s first Musikfest in 1984, but with none of the members who played at Muhlenberg.

From tape to album

Armstrong shows the range of his talent, blowing subtly over a bass-focused number, labeled on the album as simply “Blues in B♭.” On a 6½-minute medley of “Tenderly You’ll Never Walk Alone,” Armstrong plays perhaps his best horn of the show — strong and distinctive. He plays a nuanced, very bluesy “C’est Si Bon.” “La Vie En Rose” is done by request, and he introduces “Mahogany Hall Stomp,” a wild and powerful trumpet piece, by saying they did it for Princess Margaret.

Even Muhlenberg College didn’t know the Armstrong show had been taped, said Susan Maldonado, the college’s special collections and archive librarian. No college files or folders exist regarding the recording.

“Somebody must have had really nice equipment to record with that kind of quality right off the stage,” Roark said. “It could have been pulled off a mixer board of some type, but it still would have been primitive in that time.”

It’s possible the recording was done for Muhlenberg’s radio station, but Maldonado says the station also has no record of the tape or even of the show.

Roark played the tape on his radio show, presumably the first time anyone had heard the performance in more than 60 years, then stored it away as he reached out to record companies to see if there was any interest.

He said he spoke to another company that released only limited editions marketed for short periods. Then he talked to ORG, because it had released previous Louis Armstrong live albums — even one from 1956, with relatively the same lineup.

“We don’t necessarily specialize in any certain genre. We’ve done everything from Nirvana to John Coltrane to Johnny Cash, really all over the place,” Rossiter said.

ORG, he said, is interested in recordings that are either long forgotten or haven’t been issued in decades. “Or in this case, which is the best possible scenario, something that no one even knew existed.”

“It was so obviously in our wheelhouse that we were excited about it and wanted to make it happen. … It just popped out at us,” Rossiter said.

Roark sent him digital transfers that he had done with the tape.

“I’m a big fan of New Orleans-style traditional jazz, and no one really beats Louis when it comes to that stuff,” Rossiter said. “Louis’s just got something special, and you can hear it in the recording — how the audience is responding and it feels like a special moment. At a college performance, nonetheless. Not even at a big, proper theater hall.

“And so we felt, more than anything, this is kind of a historic recording that we needed to get out there. For a tape that was unknown to everyone else and presumably not professionally recorded by anyone known, it came out great.”

ORG routinely pays “mechanical royalties” — money to a songwriter whenever a copy of a song is made. For the Armstrong tape, rights for the recordings “were a little less straightforward, but we sorted out an arrangement with the help of our lawyer. There were no major issues,” Rossiter said.

The recording had places where the sound dropped out and other imperfections, and it probably wasn’t stored with care, but it sounded “incredible,” Rossiter said.

ORG worked with a facility that Rossiter considers the best for archival tape transfers. “We just wanted to get it as flawless as possible,” where it was transferred to high-resolution digital files, he said. The recording also was in mono and was divided into stereo.

“It was exciting to see it happen,” Rossiter said. “The audio’s definitely a bit rougher before mastering. We cleaned it up as best we could without changing anything or taking away the integrity of it. But I think it came out pretty great.”

A voice after 63 years

The 12-song, 45-minute disc closes with a reprise of “Sleepy Time Down South.”

“We’re very happy that we swung for ya,” Armstrong says. “Thanks a million and good night.”

“That’s really special for us, because most of our business is done through independent retailers,” he said.

ORG eventually will release the album on CD and digital formats.

“When we do something like this — when we take a release that’s never been out before — and the first opportunity anyone’s going to get to hear it they actually have to walk into a physical, independent mom-and-pop record store and buy the record, that’s important to us,” Rossiter said, “and partially a way to give back to the indie retail community, because they support us.”