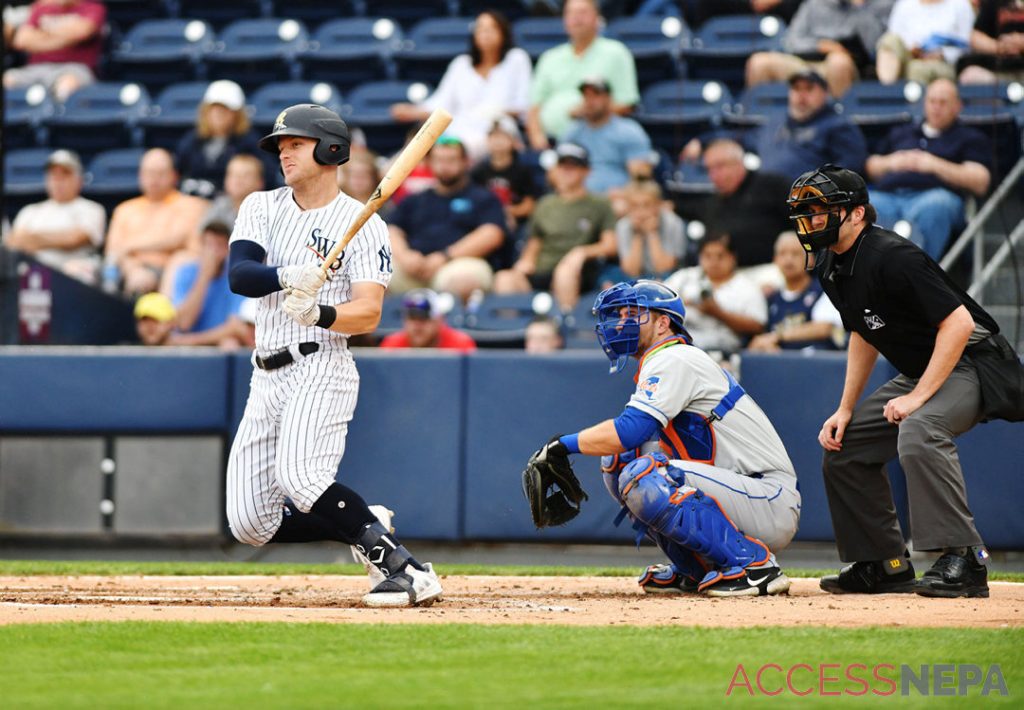 MOOSIC — On a different night, with the way the ball came off his bat, maybe the last fly ball Trey Amburgey hit during Tuesday’s game has enough juice to carry that few extra feet over the wall and into the RailRiders bullpen.

A little thinner air or a bit of a breeze, and maybe the Scranton/Wilkes-Barre outfielder is still riding his hitting streak, closing in on the franchise record.

Instead, for the first time since 2019, Amburgey went without a hit in a game. He still played a part in the RailRiders’ comeback win over Syracuse that night, working a walk and driving in a pair of runs on sacrifice flies, including that last one that sent Mets left fielder César Puello back to the warning track. It snapped a 20-game hitting streak, which spanned a year begrudgingly spent away from baseball and a groin injury that momentarily halted a stellar start to the season. Had he been able to carry it for another week or so, Amburgey could’ve chased Pablo Ozuna’s 27-game march for the Red Barons in 2004, which still stands as the club’s best.

“(Teammate Ryan) LaMarre said it, he was like ‘Whatever you’re feeling right now, always remember it, because it’s fun to watch,’” Amburgey said. “It’s been fun to just come in here and play again.”

Last year wasn’t as fun for the 26-year-old.

Despite spending all of 2019 at Triple-A and growing into one of the RailRiders’ most consistent hitters during his first go-around at the level, Amburgey was left off the invite list for the New York Yankees’ alternate site at PNC Field. He batted .274 and had 31 doubles and 22 homers in 124 games, but wasn’t included in the pool of players that would back up the big league squad during the pandemic-shortened season. The few outfield spots went to Estevan Florial and Miguel Andújar, who unlike Amburgey were already on New York’s 40-man roster, and minor league free agent additions Zack Granite and Rosell Herrera.

Instead of being at the alternate site, he worked with his college coach, Ryan Beckman, at St. Petersburg College in Florida. When he spoke to some Yankees officials in spring training this year, Amburgey said he was told he needed more at-bats; needed to play more. He said he got a vibe that they wanted him to prove he could do it again.

Through 21 games this season, he’s batting .372 and nearly half of his hits have gone for extra bases.

“Even in the alt site (this year), I was barely playing,” Amburgey said. “And I’m just like, ‘You know what? I know what I bring to the table. I know who I am as a person, as a player and I’m just going to accept it. Let it fall where it may.’ Now, I’m playing every day. It just took that, I guess.”

So far, he’s showing his consistency in 2019 wasn’t a fluke.

Six games into the season, Amburgey pulled a groin muscle legging out a double during the home opener against Lehigh Valley on May 11. At the time, he was 11 for 25 (.440), and had already popped four homers and three two-base hits. He could barely walk off the field, but if this was going to be a prove-it year, any kind of long absence wouldn’t help. So, the next day, he was out walking laps around PNC Field as his teammates went through their pregame drills.

“This rehab process was so different than other ones,” said Amburgey, who would make it back into the lineup May 29. “The other ones are drawn out, slow. Like, ‘Let’s rest and then we’ll start building up.’ This one, we hammered away right away.”

He picked up where he left off once he returned. In his second at-bat back, he clubbed a home run. Two games later, another homer.

He’s 19 for 56 (.339) after the injury, with eight extra-base hits. He’s about five games worth of plate appearances shy of qualifying for the Triple-A East hitting title, but his .372 average entering Saturday was three points shy of Omaha’s Edward Olivares for the overall lead. He’s slugging .705, while no other hitter in the league is better than .643. His 1.112 OPS would be just behind teammate Hoy Park (1.156) for the top spot in that category.

“He does everything well,” RailRiders hitting coach Casey Dykes said. “I mean, he controls the zone. Hits the ball hard — obviously, he can drive the ball to all fields. And he’s really smart when it comes to understanding, pitcher to pitcher, how they’re going to attack him and really selling out to that plan and not wavering from it. He’s convicted in it. And so he does a great job of sticking to it. Whether it works or doesn’t work, he knows that he’s in the right mental state, and he just repeats that over and over.”

Amburgey’s play is earning him some attention on social media, too, with a former teammate advocating for his promotion to New York.

With the Yankees’ outfield depth put to the test in May, newly retired catcher Erik Kratz responded to a tweet about Yankees manager Aaron Boone saying Florial could be an option for New York since he’s already on the 40-man.

Amburgey was injured then, but Kratz didn’t stop there, with each note garnering more attention.

On June 3, “Trey Amburgey is still a stud this morning…@Yankees”

After a long home run against Buffalo in Trenton on June 11, “@Yankees were off tonight so they could watch Trey Amburgey hit one off Gate 6 at Yankee Stadium. Video is legit and so is Trey.”

There are many more, and Amburgey appreciates the support.

“It’s funny to watch him do it and then see like, slowly it’s grown as like, ‘Oh, all right let’s hop on board this,’” said Amburgey, who played with Kratz in 2019 with the RailRiders.

“He was that presence in the locker room that you would gravitate to. I mean, there’s been times like last year and earlier this year, I called him for some advice about things and he’s always there.”

Amburgey carried a 29-game on-base streak into Saturday, which is three shy of the Scranton/Wilkes-Barre record, set by Brandon Drury in 2018. He had hits in back-to-back games after the 20-game roll ended, including two knocks Friday against Syracuse: a 105-mph single and a 110-mph RBI double in the seventh inning.

He’s approaching 150 games at Triple-A, where he has a career .864 OPS, and he’s still hoping to hear that call from New York.

“(It would be) a dream come true,” Amburgey said. “My mom will tell you that I’ve been swinging a bat since I was two years old. So, it’s all I wanted to do. Any teacher that asked me what I want to do, was always same answer: ‘Play baseball.’”