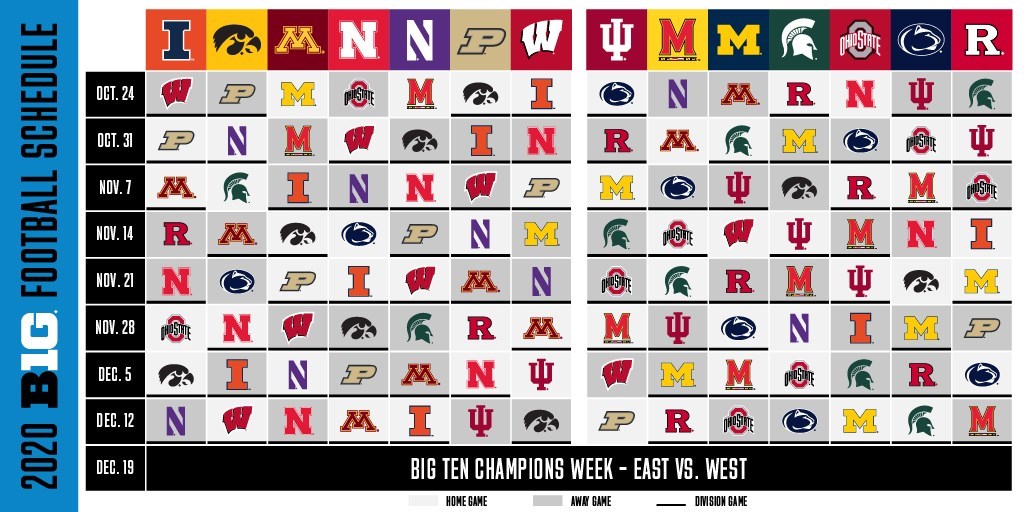 In the Big Ten, as in life, some have easier roads to success, and others have more difficult ones. Ohio State, for example, will have three of its four most difficult games — from a preseason perception standpoint, anyway — at Ohio Stadium. And then there’s Nebraska, which somehow drew Penn State and Ohio State as its two cross-division opponents and gets to face them both — in addition to Wisconsin — in the first month of the season.

The Nittany Lions’ schedule lies somewhere in the middle. You can argue they’re the more talented team just about every week. But you can accept that this is a team that, typically, finds a way to drop a game it shouldn’t against one of those less-talented teams.

Or, you can throw everything out the window in a year that does not promise to be like any other.

Let’s look now at each of Penn State’s games on its eight-game regular-season slate, examine those pitfalls, and try to decipher those handful of games that will determine whether it is a national title contender, or bound for another miss.

This is the trickiest game on Penn State’s schedule.

There isn’t a particularly close second.

But this is 2020, and if 2020 has taught us anything, it’s that we know a whole lot of nothing. We don’t know how empty stadiums are going to affect these players. We don’t know if an empty Memorial Stadium helps Indiana, because that’s not typically one of the more vaunted environments in the league in which to play. And for as good as everybody seems to think Penn State can be this season, there are questions. What is this defense without Parsons? Are the receivers going to be productive? Can Sean Clifford take the next step?

Combine all of that with the fact that Indiana, potentially, has a chance to be better than a spolier this year. QB Michael Penix looked strong before an injury last season (he didn’t play in the Penn State game). RB Stevie Scott is a bruiser, and Whop Philyor and Ty Fryfogle give Indiana one of the more productive receiver duos in the league.

That’s an offense that gives even the best defenses in the league fits. Coming out of the chute, who knows what goes down. This would be a good win for the Nittany Lions, and they have to have it.

One of the big questions for Penn State this season will be what kind of home-field advantage Beaver Stadium really provides with no fans in attendance.

Conceivably, the answer is none. But again, we don’t know what travel protocols will be like, how different the road experience will be for players, and this will be the first opportunity the Buckeyes have to experience that in a season where they’ll be looked at as the conference’s best tournament hope.

This is absolutely a must-win for Penn State, of course. You probably don’t get into the playoff at 8-1 with a loss to the Buckeyes; not with Ohio State getting to play the schedule it has.

But, you have an environment you control. You have a talent-rich team early in the season, which arguably is a better time to play a team like this (Ohio State has lost the second game of the season twice since 2014, for what it’s worth). And hey, a lot of this is a perception game. Get that big win out of the way early, and you have set yourself up for a title run in the eyes of the voters.

Crazy things happen, and this is 2020, so evidently anything can happen.

But in the last three games between these teams, Penn State has outscored the Terrapins, 163-6. This is a team that has beaten Texas and taken Ohio State to the brink in that time frame. There’s just something about the blue and white that makes Maryland fold.

Maybe the lack of a crowd changes things for the Terps. But that’s a big maybe the way this series has gone.

Nebraska is one of the few Big Ten West teams that have kinda, sorta had Penn State’s number.

Since 2003, the Cornhuskers have won four of five meetings, and the one Nittany Lions win provided a bit of angst — they led by 32 with 10 minutes to play and won by just 12.

Personally, I think Nebraska will give Ohio State fits in the opener. That will be a motivated team, one that knows the construction of the schedule was as much a message as it is a slate of games. But this is a good time to get Nebraska if you’re Penn State. The Huskers will have faced the Buckeyes and Wisconsin, and they’ll be coming off a road game at Northwestern. This game comes three days before the first CFP rankings, so Penn State will have a good chance to be impressive on the road.

The last trip to Lincoln came in 2012, and it is infamously known in Happy Valley as the John O’Neil/Matt Lehman game. The “fumble” at the goal line.*

*One of my most memorable moments on the Penn State beat came after that game. Just after Bill O’Brien’s more-diplomatic postgame comments on that call, a colleague turned and asked me, “So, do you think Matt (McGloin) will rip into the officials?”

“Oh, I doubt he’ll have anything different to say,” another added. “They have these kids so in tune with the company line…”

“Just wait,” I said, as McGloin walked into the room.

Amazingly, because it seems like these two programs duke it out in an absolute slugfest where the winner is determined by controversial majority decision every year, Iowa hasn’t beaten Penn State since 2010. It hasn’t won at Beaver Stadium since the season before that.

None of the last three games have been decided by more than six points.

This is not an Iowa team most of the experts are high on, but it certainly can be really good. It needs to find some consistency at quarterback after Nate Stanley’s departure, but there are plenty of weapons at the skill spots, and they’ll be good up front.

This is one of those games that can be so difficult for Penn State; week after the CFP rankings, the week before a big road game. And it might mean everything to Iowa.

This has trap-game loss potential written all over it.

It seems like every contender in the Big Ten has some form of kryptonite that can cripple it.

For Michigan, it’s the site of Ohio State. For Wisconsin, it’s the Big Ten Championship Game. For Ohio State, if there is a weakness, it’s Penn State’s White Out.

The Nittany Lions never seem to play well there. Their last win in Ann Arbor came in 2009 against a so-so Michigan team during the Tate Forcier era. Their last win there before that…let’s just say Kim Herring picked off two passes and Curtis Enis ran for 114 yards (it was 1996).

Michigan has outscored Penn State, 91-17, in the teams’ last two meetings in Ann Arbor. Penn State must change that this time.

This will be the first post-November game for Rutgers since the 2014 Quick Lane Bowl against North Carolina.

This probably isn’t a game Penn State can lose — it has allowed just two touchdowns in six meetings against the Scarlet Knights as Big Ten foes — but it should be interesting. Greg Schiano will be winding down his first season in his return at Rutgers. This program will either be trending up, or he’ll be wondering what he got himself into.

Let’s say, for the sake of the discussion, Penn State comes into this game unbeaten. One win from the Big Ten Championship Game, and perhaps a trip to the CFP. Dream season scenario in a nightmare year. All eyes on Happy Valley.

Can Sparty ruin everything?

It’s conceivable, because Penn State always seems to struggle with this program. While the Spartans come into the season looking for a quarterback to replace Brian Lewerke, and will have to replace three of their top receivers from last year, and didn’t run the ball especially well, they’ll have time to work all that out. And this will be a good test of the impact Mel Tucker has had on the program in his first season. Eight games in, you should start to see some of his fingerprints start to become evident, if not on the results than on the spirit with which they play.

Penn State has won just two of its last seven games against Sparty, but these are two programs that were heading in different directions at the end of last year.