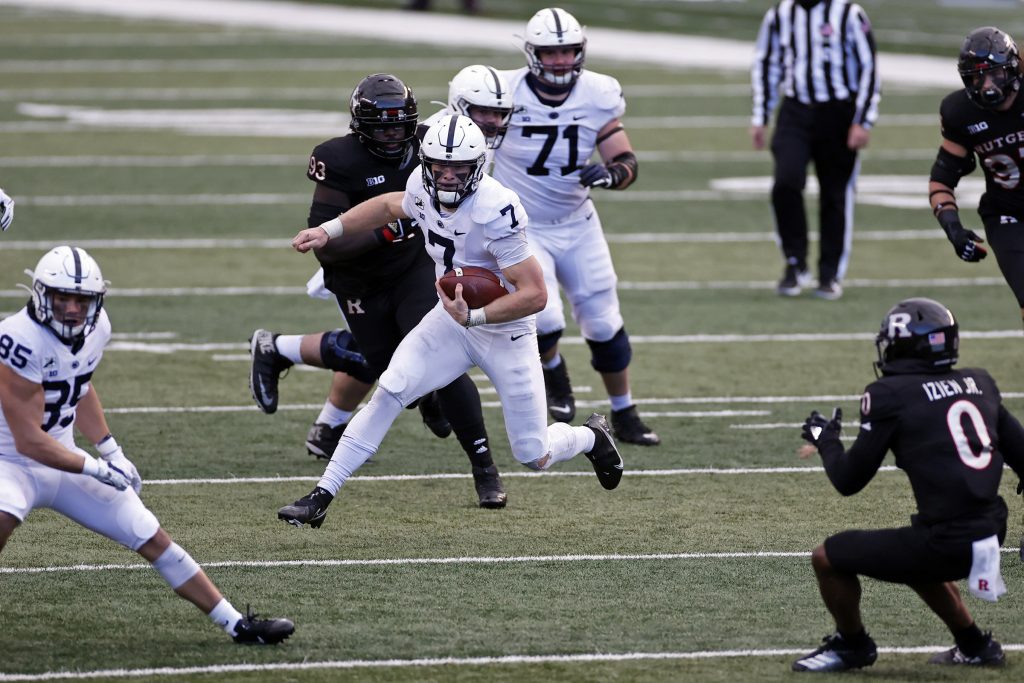 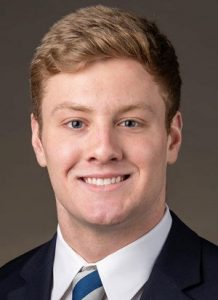 But, quarterback Will Levis announcing intentions to leave? That drew headlines. He is a quarterback, after all, and quarterbacks command attention. He’s also someone who has fascinated Penn State fans for a few years now, at a position where fans and coaches have been pining for a clear difference-maker.

Whenever a move like that is announced, especially from a player at the most important position on the field, it raises a ton of questions.

…Should anyone have been surprised by this?

That’s a difficult one to answer in any concrete way, but let’s put it this way: I do think most around the program were taken aback just a bit by Levis looking for another opportunity.

After all, this is the type of guy you generally want to keep around as a program. He’s a big, physical, strong athlete who is a good kid, whose teammates rallied around him. He’s a very, very raw prospect still. But, he has prototypical size for a quarterback. He had the best throwing arm on the team. And, for my money, he had the best potential as a runner of anyone in the quarterback room.

He also had a really interesting combination of two things you don’t often find together: Playing experience and eligibility remaining. Which would lead you to believe… 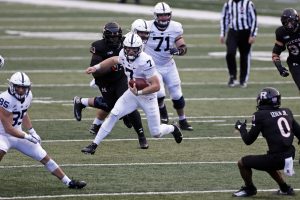 Penn State quarterback Will Levis did most of his best work on the run in 2020. ASSOCIATED PRESS PHOTO

…Should Penn State have fought to keep Levis?

Conceivably, if you consider all of that, yes.

But, understand, there are some outside factors to consider here.

For starters, Levis is graduating in the spring. That contributed to the surprise factor of the decision, because nobody really ever thought to ask if Levis was on track to graduate with his business degree in just three years. But, he is. You don’t get too many players who are looking at playing their final three seasons of eligibility out while they’re in grad school.

Levis is a fantastic student. Had he not gotten a late offer from Penn State in the 2018 recruiting class, it’s very likely he’d have been a quarterback in the Ivy League. So, maybe, finishing out his masters at a different institution is something that’s as attractive to him as playing quarterback.

The other factor to consider here is that Penn State is clearly at a crossroads as far as what it wants to be offensively. That’s why head coach James Franklin brought in Mike Yurcich to run the offense this fall.

Honestly, we don’t know much about what Yurcich thinks of his personnel, because he hasn’t spoken to the press yet. Maybe that will change soon. But until then, we’re guessing and assuming.

A big assumption here, even though it’s likely, is that Yurcich has spoken with all the key members of the 2020 offense who are returning next year to pitch his philosophy. And if that’s the case, Levis may have heard something that may have tipped the staffs hand on…

…Is this a sign Yurcich and Franklin are all-in on Sean Clifford?

In the current structure, in a vacuum, however you want to describe it, doesn’t the answer have to be yes?

And look, you’re not going to see a lot of criticism of that decision — if, indeed, that was the decision — here. Good a prospect as I think Levis is, and as worth a flier as he is for a lot of programs scouring the portal for a future QB right now, if I was James Franklin, and I had my offense on the field with a chance to win the game late in the fourth quarter, my quarterback would be Clifford. 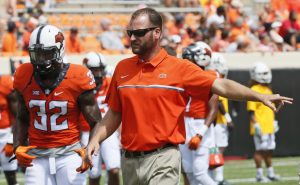 Mike Yurcich, during his days at Oklahoma State, had a penchant for developing quarterbacks. The position will need to reflect his ideals this fall. ASSOCIATED PRESS

Why? As awful as he was in the beginning of the season — especially when it came to protecting the football — and for as many issues as he has had when it comes to decision-making and accuracy, he has also done big things better than Levis has done them. He has decent wheels, too. He has a big arm, too. He has really good leadership abilities. He has done his share to help Penn State win games. He also has a few years of eligibility left. From a development standpoint, he’s a guy you can get more out of too, and I think it’s safe to say Clifford’s “floor” is higher than Levis’ floor.

Franklin has said, he wants an offense that can push the ball down the field, make consistent splash plays. Clifford, percentage-wise, has done that better than Levis. The easy comparison to make is the one you see often, that Levis is a lot like another Penn State backup quarterback of yesteryear, Tommy Stevens.

Statistically, that’s not the case. Levis is closer to a poor man’s Michael Robinson, which is no knock on Levis. But both were powerful runners who made the occasional big play in the passing game. Stevens made a splash play on a much higher percentage of his snaps than Levis did. It’s fair to say that the quarterback you’d like to have running Yurcich’s past offenses is much more a guy with Clifford’s skillset than Levis’. Great as M-Rob was, would he have a ton of success running the Yurcich offenses at Oklahoma State?

So, if we assume Clifford is the clear starter in Yurcich’s mind…

…Will Penn State head into 2021 with just three scholarship quarterbacks?

That’s where all of this gets even more interesting.

The simple answer here is no. It’s inconceivable to think Penn State won’t get someone out of the transfer portal would could either challenge Clifford for the starting spot or be a capable backup. The fact that Levis had as much playing time as he did is indication enough of the reasons Penn State needs someone solid at or near the top of the depth chart; Clifford got banged up in 2019, and he was so erratic for a time in 2020 he temporarily lost his job (then split reps down the stretch).

Is Ta’Quan Roberson a legitimate option there? Maybe. But I’ll say this: You don’t hear a lot of coaches raving about him. I asked Franklin during the early season struggles of 2020 whether there was any benefit to throwing Roberson or Micah Bowens into a game late, to get them some seasoning, to see what they have, and he shot that idea down quickly.

Roberson battled some injury issues, evidently. But that answer told me that, in a way, the staff knew what it had in those guys. And since, Bowens has entered the transfer portal and joined the team at Oklahoma.

Is Christian Veilleux a legitimate option behind Clifford? That’s difficult to see right now. Not suggesting he isn’t a top prospect. Not saying he doesn’t have all the tools. Maybe he does. But this is a guy who didn’t take a snap last fall because Maryland suspended its football season due to the pandemic. It’s just impossible, no matter how talented a kid he is, to see someone miss a senior season and then come into the Big Ten and be counted on immediately. At any position. Never mind quarterback.

The only other signal-caller on the roster last season was freshman walk-on Mason Stahl. In other words, right now, it’s Clifford and nobody else who has done anything significant on a college football field.

The traditional National Letter of Intent signing day is next week, but it doesn’t seem like Penn State is in position to land a difference-making prep prospect there. So, you’re probably looking at either standing pat or adding someone through the portal, which would lead one to ask…

…Is there a good pool of QBs in the transfer portal?

That was an obvious fit that won’t happen. Penn State will have to look for a system fit, and preferably, get someone who will be eligible to play in the fall.

The McCaffrey brothers — Michigan’s Dylan and Nebraska’s Luke — are both in the portal, though Dylan is maybe the better option, fit-wise. Jace Ruder, a former four-star prospect who started his career at North Carolina, is in the portal, will be eligible this season and is very Clifford-like on film. I think he fits the system, but the program has to fit him, too; is he looking for a starting job, or a shot to compete for one? Because, Penn State is the latter.

Another idea I kind of like: Former Auburn and Kent State quarterback Woody Barrett. He’s in the portal as a grad transfer with one season left. He started against Penn State at Beaver Stadium a few years ago. Has a good arm and runs well. Plenty of experience. He’s a good enough guy to bring in, someone who probably would push Clifford but not overtake him, someone who wouldn’t fold under the pressure if he had to play, someone you could use to take some snaps without throwing younger quarterbacks into a situation they aren’t ready for and a guy who, if he doesn’t play…no big deal.

Fact is, there are a ton of options here, a ton of ways Penn State can go. I imagine it all depends on what they think they can get and what Yurcich is really looking for from the position down the road. Bottom line is, after Levis’ entrance into the transfer portal, the one thing we do know is that what Penn State had wasn’t it.