NEW PHILADELPHIA — And so it is as we are beyond counting the days when we can put what is perceived the real or imagined perils of COVID-19 behind us and reclaim our lives.

For the Schuylkill Headwaters Trout Enhancement Program it was a case of enough waiting already as the organization went ahead recently with a stocking as part of the New Philadelphia Stream Habitat Project on the Schuylkill River. With masks in place, volunteers stocked more than 150 trout in the river behind the Little League Complex. Stocking also took place in Middleport and Cumbola.

“These fish were purchased as a result of private donations, a donation by New Philadelphia borough and our Trout Button Program, and we couldn’t wait any longer to get these fish in the water,” Trout Enhancement Program coordinator Terri Gibbons said. “In addition, a contribution by Schuylkill County commissioner Gary Hess allowed us to purchase four trophy rainbow trout that weighed three pounds or more and were 18-22 inches in length.

“We were also able to purchase a sizable amount of golden rainbow trout, which anglers enjoy targeting. It’s hard to believe how much the water quality of the river has improved since the New Philadelphia Habitat Project began four years ago with a partnership through Schuylkill County Trout Unlimited, National Trout Unlimited, Blythe Township Water Authority, New Philadelphia borough and the Schuylkill Conservation District.’’

Originally conceived by Schuylkill TU, this is the ninth consecutive year for the button program that generates funds used for increasing quality trout fishing in Schuylkill County waters. Buttons sell for $10, and in the first eight years of the program, more than $49,000 has been raised, resulting in more than 16,000 trout being stocked.

Only waters that do not have a sustainable population of wild trout are stocked, and fish stocked are a minimum of 13 inches in length. Private donations have allowed for the purchase of trophy trout, with some approaching 28 inches in length and reaching the 8-pound class. 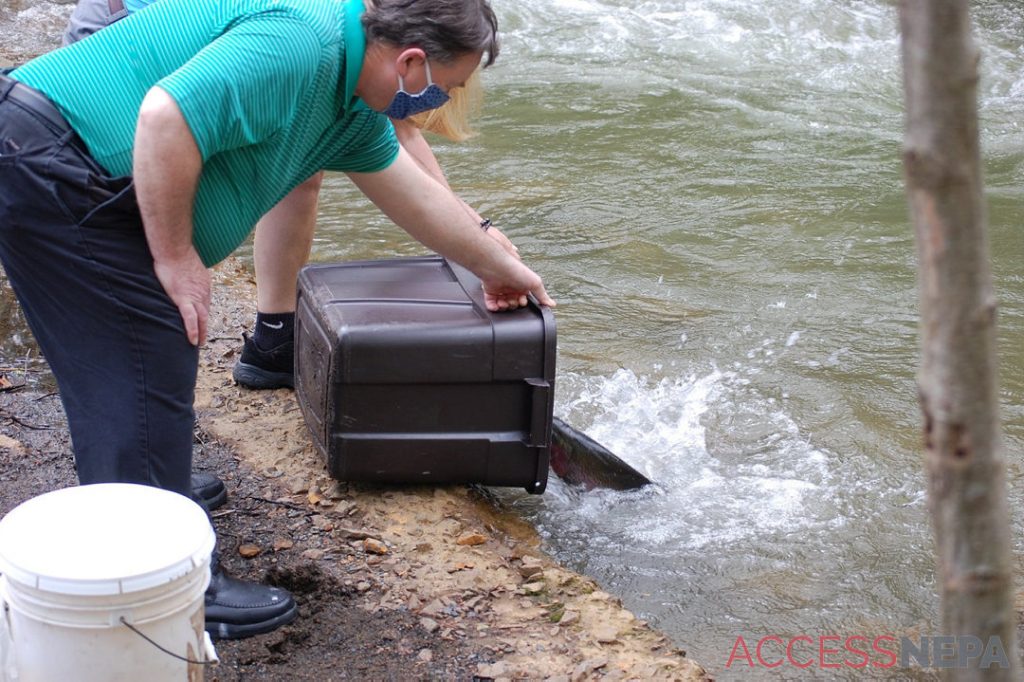 From the outset of the program, buttons have sold for a $10 donation, and those purchasing a button receive advance notice of trout stockings. In addition to stocking the Schuylkill River in New Philadelphia, Pine Creek, Bear Creek and Whippoorwill Dam at South End Field and Stream in Frackville have received trout.

“Everyone interested in improving the quality of fishing is encouraged to participate in the program because more money means more fish,” Schuylkill TU past president John Bondura said. “Company and business sponsorships are welcome and accepted, and their participation will be recognized.”

Because the main goal of SHA is to protect and enhance the Schuylkill River and its tributaries, the bulk of the organization’s work is to install on-the-ground projects to improve water quality. Many of these projects are treatment systems to treat abandoned mine drainage. Grants are used to build the treatment systems, which consist of ponds, wetlands and sometimes limestone depending upon the pH of the AMD discharge.

Other watershed restoration projects include creating fish habitat, stabilizing stream banks, cleaning up illegal dump sites and restoring streams to keep water from entering mine pools. Gibbons is co-chair of the River Cleanup Committee, but SHA has been unable to conduct any scheduled projects because of current social distancing.

“Hopefully, this is going to be over soon because we’ve got a lot of projects planned,” Gibbon said. “I can’t wait to get started.”

Which, of course, is the hardest part.

To participate in the Schuylkill Headwaters Association Trout Button Program, go to the organization’s Facebook page; for information on contributions or volunteering, call Terri Gibbons at 570-728-3195.