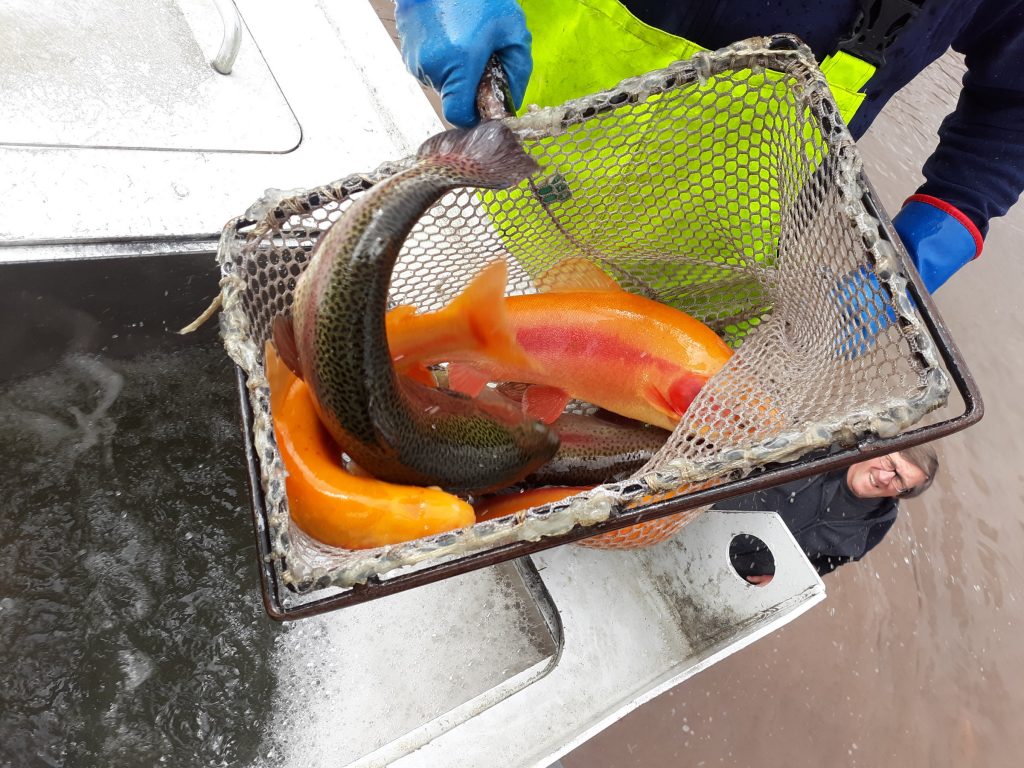 George Alaishuski admitted his arms were a little tired after he helped the Pennsylvania Fish and Boat Commission stock trout at Lily Lake on Tuesday.

It’s understandable, since the agency has increased the number of trophy trout it will release this year. At Lily Lake, one of the first stops in the county on the preseason stocking schedule, approximately 70 trophy trout were released, many of them weighing 5 pounds.

In all, two truckloads of trout were released into the lake, the majority of which were rainbows measuring 12 to 14 inches.

“It seemed like the amount of fish doubled and the trophies were bigger,” said Alaishuski, of Drums. “It’s impressive.”

The statewide trout season opens on April 18 and anglers will have plenty of reasons to continue to be impressed.

This year, the PFBC will stock approximately 60,000 brood trout, which are 2½-year-old and 3½-year-old hatchery-raised rainbow, brown and brook trout measuring 14 to 20 inches. The allocation of trophy trout is more than double the number stocked in 2019. Roughly 70 percent of the big trout will be stocked into streams and lakes during the preseason prior to opening day of trout season, and 30 percent will be stocked during the season.

The number of golden rainbow trout to be stocked in 2020 will also increase to approximately 13,000, up 40 percent from last year. While 80 percent of the golden rainbows will be stocked during the preseason, 20 percent will be released after opening day.

Mike Parker, communications director for the PFBC, said the move to stock more trophy trout — both before and during the season — is geared toward opportunity.

“By not only stocking more big trout, but releasing them during the season as well, we’re extending the opportunity for anglers,” Parker said. “Everyone gets more excited when they have a chance to catch something big.”

Plenty of anglers also get excited to help stock trout as well. The preseason stocking schedule kicked off in the area last week, and at Lily Lake more than 20 anglers turned out for a sneak peek at this year’s fish.

Typically, the preseason trout stockings are welcomed as a sign of spring. But even after a mild winter, the occasion is still met with enthusiasm.

“We stocked Little Fishing Creek last week and there were more people there this year than last year,” said Waterways Conservation Officer Aaron Lupacchini. “The winter was warmer and a lot of anglers couldn’t ice fish, so they’re turning their attention to trout.” 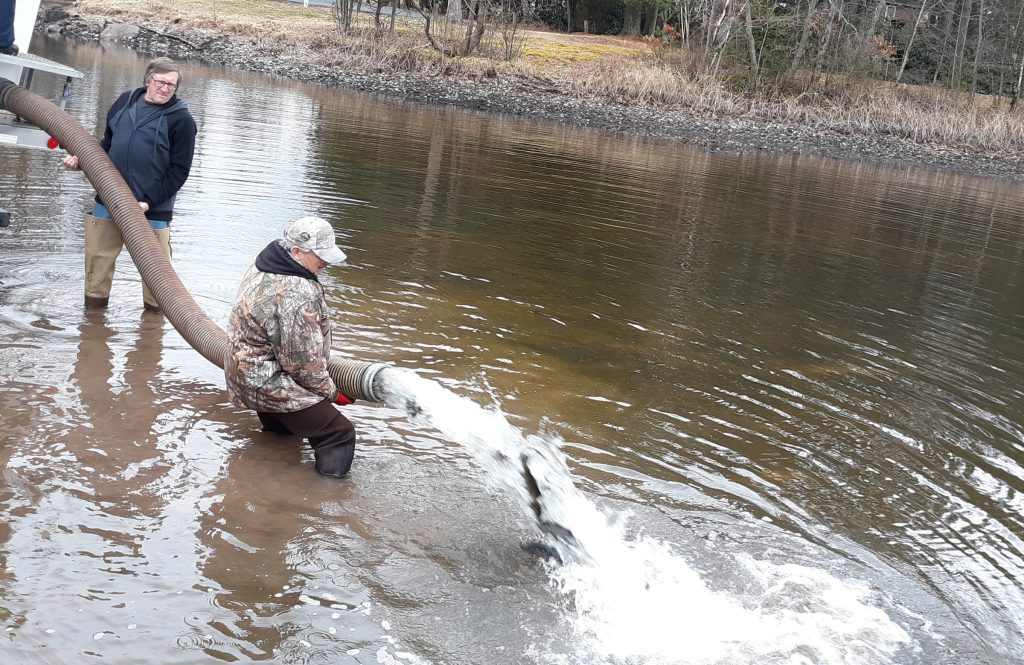 Lupacchini is happy to see the interest because it means more people willing to lend a hand to get the fish in the water. The PFBC will stock approximately 3.2 million trout, and Lupacchini said it wouldn’t be possible without volunteer help.

While everyone at Lily Lake was happy to either help out or watch the trout pour into the water, a few had concerns.

Lily Lake is open to year round fishing, and trout can be caught any time but must be released from March 1 to the season opener.

Hanover resident John Pavloski was pleased with the number of fish stocked at the lake, but he was surprised that anglers could cast a line for them before the season opens.

“Even if they have to release them, it seems counter-productive,” Pavloski said. “It’s not right. It stresses the fish and there shouldn’t be any fishing here until the season opens.”

Lupacchini cautioned that anglers who catch trout before opening day on waters open to year round fishing need to release them immediately. If they are harmed or kept out of the water for a prolonged period, the angler can be cited, he said.

To avoid injuring trout, Lupacchini recommended using barbless hooks and flies or artificial lures that the fish are less likely to swallow.

In addition to taking precautions to release fish, Lupacchini also reminded anglers that access around parts of Lily Lake may be limited temporarily. Over the winter, the PFBC reduced the level of the lake to expose the shoreline in an attempt to kill watermilfoil — an invasive aquatic weed. Work was also done to repair the base of the boat launch, install more handicap parking and make preparations for a new dock.

Lupacchini said the improvements will be completed soon and the water level at the lake will return to normal before the opening day of trout season.

“The lake will be the same depth it always was and anglers will benefit from the access afforded by the new dock,” he said.