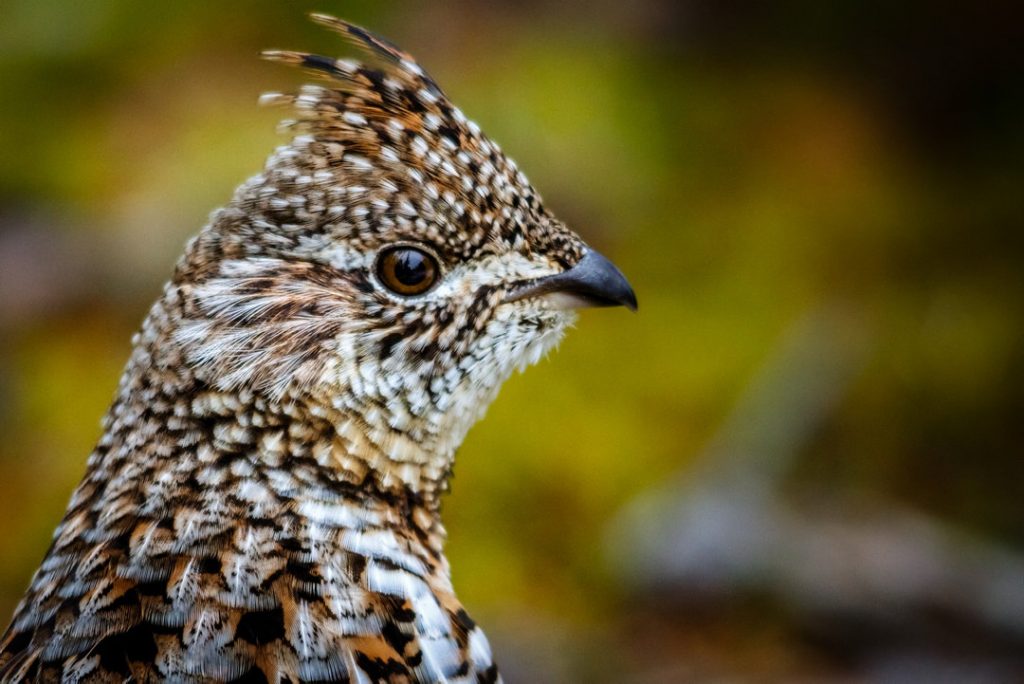 Pennsylvania’s state bird is in serious trouble. The ruffed grouse, known for its signature wing drumming in the spring woods, and speedy, explosive flushes when startled, has been vanishing from the landscape.

After reaching a population apex in the mid 1990s, the non-migratory bird that has little problem surviving the harshest of winters has fallen victim to the repercussions of human interaction.
For the past five years, Pennsylvania Game Commission Grouse Biologist Lisa Williams has been intensively studying grouse population decline, and is working to stop the trend.

A newer threat — “The one that kills you quickly,” Williams said — is West Nile virus. Traced to accidental importation of foreign mosquitoes hitching rides on cargo ships from Africa, western Asia, and the Middle East, to New York City in 1999, the virus has spread across the North American continent. Birds and mammals bitten by the foreign mosquito were subsequently bitten by native mosquitoes, which then spread the virus.

The Centers for Disease Control and Prevention has named 300 different bird species that have tested positive for West Nile virus, led by crows and jays.

“We now know that that virus is very deadly to grouse,” Williams said.

Mosquitoes bite the fleshy rings that surround birds’ eyes, or between the scales of their legs. Chicks with under-developed feathers are highly vulnerable to the infected insects, she said.
Grouse populations that have been clinging on in areas of bad habitat — the southern two-thirds of Pennsylvania, Williams said — are taking the brunt of the virus. In the northern tier counties where habitat is better, she said, “they can almost keep up with the disease; they can get ahead of it.”

Williams said different bird species have responded in different ways, with varying levels of mortality. Some die quickly, while others become sick, but survive. Some don’t seem to get sick at all. “It almost sounds like COVID in some ways,” she said.

Following a hunch that the virus was affecting grouse, Williams conducted a study in 2015 with Colorado State University.

“We found that 40% of the grouse chicks that we gave the virus to died very quickly,” she said. “The chicks died within two weeks. The other 60% of the sample looked OK.”

But she said that after two weeks, they developed heart and brain damage so badly that they would not have survived in the wild. “That was sort of an ‘Oh brother!’ moment.”

She said: “We know some birds can get it and survive in the wild, and they recover. Theoretically they should be immune, as they’ve acquired the antibodies. What we’re finding, though, is that it seems that they’re not surviving more than a couple of years.”

Healthy grouse can live as long as 10-11 years in captivity, but a West Nile infection drops that expectancy to just two.

Another factor is the decline in bat populations, as bats eat lots of mosquitoes. After 20 years of bat population gains, and advances in research, White Nose Syndrome suddenly swept through the U.S. starting around 2008, severely curtailing the bat population.

Williams said Pennsylvania has reached a 75-year low for necessary grouse habitat — that is, a young, healthy-growing, thick forest of downed logs, brambles and scattered saplings.

“The stuff that you would have to fight your way through,” she said, “they need that around to protect them from predators.”

Humans “like a forest that looks kind of like a park,” she said. “Wildlife really want a mess. It’s what’s best for them.”

The state was largely clear-cut through the late 1800s, with forests regrowing during the 20th century. Today, much of Pennsylvania’s forest area is 90 to 120 years old. Only 7% is made up of young forest that grouse need for courting, nesting and brood-rearing. “We really need twice that for grouse to really thrive,” Williams said.

So how were grouse able to survive in forests of virgin timber before humans arrived? Williams credited beavers, which create swamps by cutting down small trees and damming streams. That process allows witch hazel and berry thickets to take root and create quintessential grouse habitat, the biologist said.

Tree loss due to disease and blight is nature’s way of killing off certain species and leaving voids in the mature forest, along with wind storms, which opened small pockets of grouse habitat.

“The other thing that really changed was the role of fire,” Williams said, noting that naturally occurring fires were once a vital part of the cycle of forest life. Research has revealed that, before humans, major fires along ridge tops occurred every nine to 12 years, leaving behind ideal conditions for new growth.

Forests broken up by farmland and development pose another problem. Unlike turkeys, grouse usually do not cross large open areas. 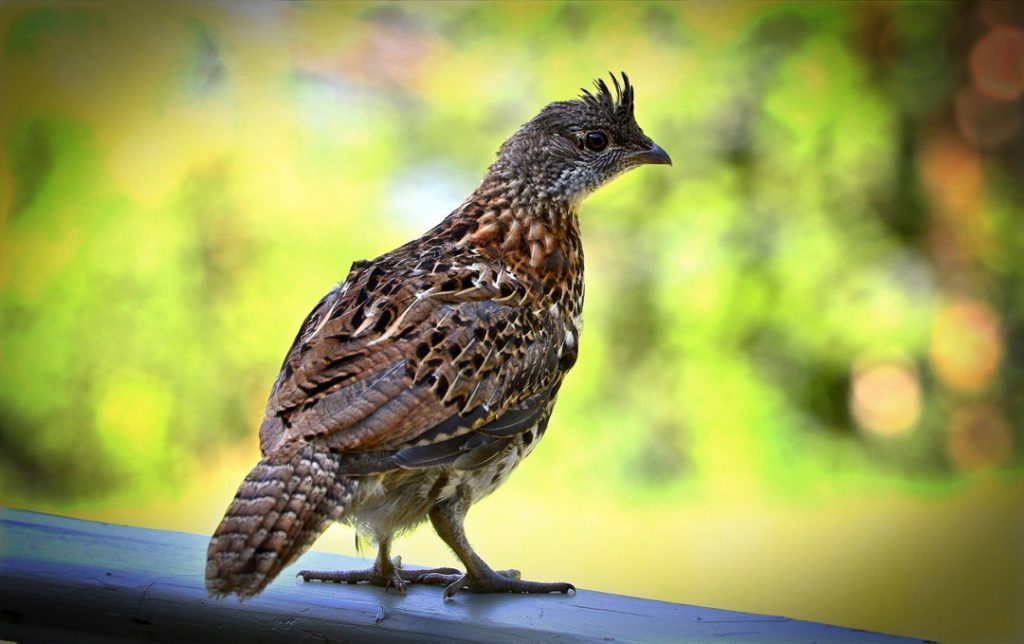 SUBMITTED PHOTO
The ruffed grouse is the state bird of Pennsylvania.

Williams enlisted the help of 800 hunters who provide her with blood samples of birds they harvest. The blood can yield antibodies and show infection percentages.

“We’ve been racing to try and get ahead of it,” she said.

Since mosquito populations rise and fall largely due to temperature and rainfall, Williams has found that weather is a primary factor in the spread of West Nile. Above-average spring and fall temperatures prolong the mosquito-breeding season, and eight of the past 10 years have been that way. Williams said that “2017 and 2018 were horrible years for disease; 2018 was the worst year that we had ever seen, just because of the weather.”

So Williams developed a hypothesis: “Can we lessen risk by putting grouse habitat away from these mosquitoes?”

“At this point we’ve trapped about 53,000 adult mosquitoes and looked at where they came from,” she said. “What elevation did they come from? How far away were they from agriculture?”

The tool is showing where mosquitoes are most, and least common — and providing a map that PGC land managers and foresters can use to promote grouse habitat where the birds have the best chance to survive.

“It’s another way to lessen risk,” she said. “If we can’t treat the water and kill the mosquitoes all across the state — which we can’t — we can at least work smarter and make sure that we’re investing our time and and funding and work into these management areas that are naturally safer for grouse.”

Since lower elevations are mosquito-friendly, habitat projects along ridge tops are the target.

“It looks like if you can get above 1,600 feet, or 1,900 feet in elevation, you really see those mosquitoes kind of drop off at that point,” Williams said, adding that since stagnant water is a haven for mosquito incubation, eliminating that factor is important in addressing West Nile.

Williams’ efforts have not gone unnoticed, winning her the Ernest Thompson Seton Award earlier this year. The award is given to agencies and individuals who promote scientific wildlife management projects.

Nationwide, states have now adopted grouse research and recovery plans based on her efforts.

“That’s our newest response now, to try and build this beyond Pennsylvania and make it a real eastern grouse recovery effort,” Williams said.

More hope came from the past two summers, which have been mild and dry — and Williams said her statewide grouse numbers have actually increased by 10% since 2018.

In 2017, the PGC took an emergency measure by shortening grouse season for the first time since 1960, indefinitely postponing after-Christmas hunting. “I promised grouse hunters, when we did that, that I would develop a system that would change the season based on how the birds were doing,” Williams said.

The late season can have a large effect on the birds, as they’ve already survived being chicks, possibly dodged the virus, and eluded fall hunters. “They’ve made it through everything else,” she said. “We want them in the breeding population.”

Hunters are still permitted to take two grouse per day from Oct. 17 to Nov. 27, and from Dec. 14 to Dec. 24. Williams decided not to drop the bag limit, as only 3% of the hunters she uses with her study ever get two grouse in one day.

“It’s so hard to harvest one grouse, let alone two,” she said. “It means that you are in excellent habitat, you probably have an excellent dog with you, and you’re an excellent shot.”