Grinding it out for groundhogs

One summer during my scholastic years at Pine Grove Area High School, my best friend Bobby Wolfgang and I shot a combined 63 groundhogs with archery tackle. We worked hard to achieve that tally, learning the art of the stalk in the process and removing plenty of nuisance pests from the family farm.

As successful as we were, never do I recall shooting 12 groundhogs in the same day — not even between the two of us. Gun or bow, taking a dozen chucks in one rise and set of the sun is a tall task, but that’s exactly what happened last June during a banner day afield pursuing the varmints with my Mossberg International .17 Caliber HMR rifle.

Last summer, Friedensburg Fish & Game Association, in partnership with the Friedensburg Fire Company, held a joint fundraising hunt for groundhogs during a weekend in June. They could both raise funds for their organizations while encouraging outdoors recreation during a time that would offer a premier service to local farmers, by lessening the impact of woodchucks on their properties.

Groundhogs are destructive animals. Not only can their holes risk damage to livestock in the form of broken legs, but these burrows can also take a toll on farm equipment when accidentally driven into or hit with machinery.

Beyond the damage of the ground disturbance they create, groundhogs also consume a lot of crops, especially soybeans and corn in its soft milky stages, causing even more financial impact on the farmers. Needless to say, I don’t know many farmers who aren’t eager to thin out the population of resident chucks on their croplands.

Knowing it had been years since our farm had been targeted for woodchuck hunting, I signed up for the contest. It would do my dad a favor by taking out some hogs, I’d have an opportunity to reconnect with an enjoyable challenge of my youth, and who knows, maybe I’d even win the top prize for the heaviest groundhog in the process.

The hunt was held over a two-day window to account for the potential of weather impacting one of the days’ hunting opportunities. It turned out I personally would need this flexibility, when I learned early in the week leading up to the hunt that a close family friend had passed away, and his funeral services were to be held on Saturday.

That gave me Friday afternoon to hunt, and even more incentive to escape to the outdoors to clear my mind and cope with the emotions of my friend’s unexpected passing. I showed up at the farm around noon, wearing breathable and moisture-wicking warm weather hunting gear — the same clothing I would wear while turkey hunting in late May, or on a Florida hog hunt — with long pants and comfortable boots keeping me protected in tall grass and poison-ivy laced field edges. 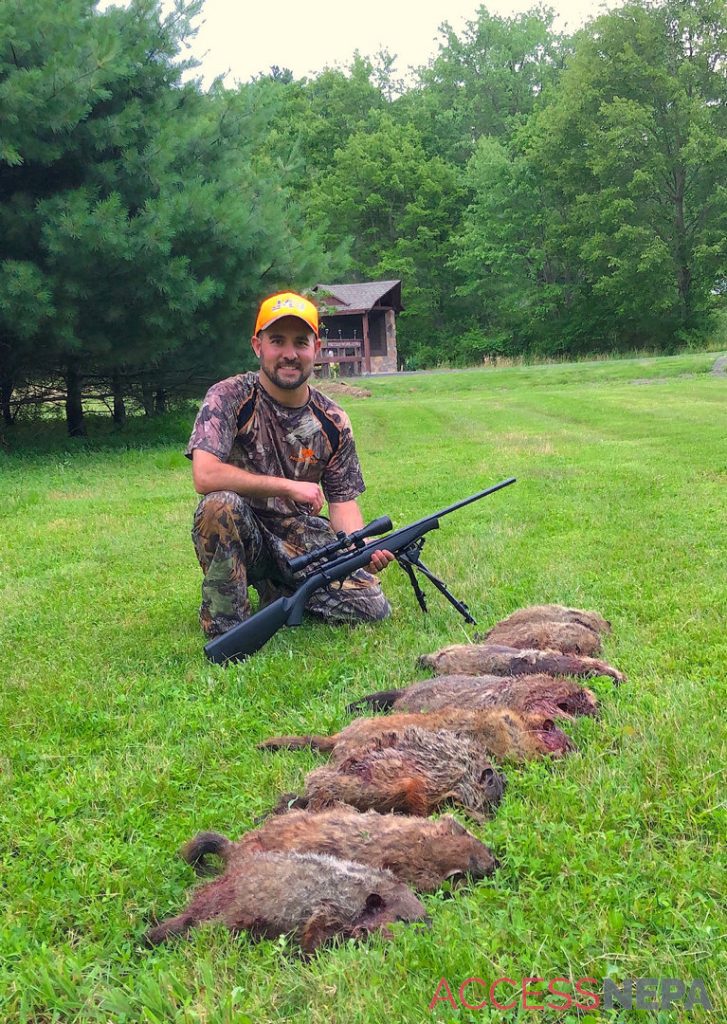 TYLER FRANTZ / CONTRIBUTING PHOTOGRAPHER
Two of these groundhogs topped the scale at 10 pounds, which were good enough for second place in last year’s fund-raising groundhog hunt sponsored by the Friedensburg Fish & Game Association and the Friedensburg Fire Company.

A fanny pack held the essentials, such as bullets, granola bars and bottled water, plus my hunting license, keys and wallet.

Lastly, a backpack frame lined with a garbage bag would help carry out any mature groundhogs I thought might measure up to the leader board at weigh-ins later that evening.

For the next several hours I hunted nonstop, driven equally by my competitive nature as well as a yearning for reflective solace amid the sadness of my friend’s death. I first took a stand in the shade to escape the oppressive mid-day heat.

This position produced my first two groundhogs, spotted from an elevated position overlooking a field corner where they unsuspectingly ventured from their holes just inside the woods line. Wanting to rest the spot, I took a walk around the field perimeter, missing one on the run, body shooting two that made it down their holes before I could get to them, and finally adjusting my strategy to focus on stationary head shots for quick, clean, efficient kills.

Once I switched to this tactic, my harvest rate increased tremendously, and I kept walking stealthily around the property, rotating areas to rest one location, giving it time to settle down, while focusing a new area before circling back to where I started. With 120 acres to cover, I’m positive I walked several miles in all, capping the afternoon with consecutive shots at my three largest groundhogs from a single kneeling position.

Viewing the open field, I noticed a groundhog feeding, and made the first shot at about 80 yards. Upon my gun’s rapport, another chuck stood a little farther out.

I quickly aimed and dropped that one as well. Unbelievably at that shot, a third previously unseen groundhog stood even farther out, and I called it a day after that one — my 12th in five hours — fell to my .17 HMR.

Packing out the eight largest groundhogs, I drove to weigh-ins, reflecting on the incredible day that I experienced. Two of my chucks weighed in at more than 10 pounds, good enough for second place in the contest, behind the 10.8-pound grand champion.

In the end, it wasn’t really about winning, but helping out my dad by removing pests on the property, reminiscing to the “good old days” of grinding it out for groundhogs, and most importantly, learning to accept the loss of my friend, who I’m sure was smiling down on me that day.