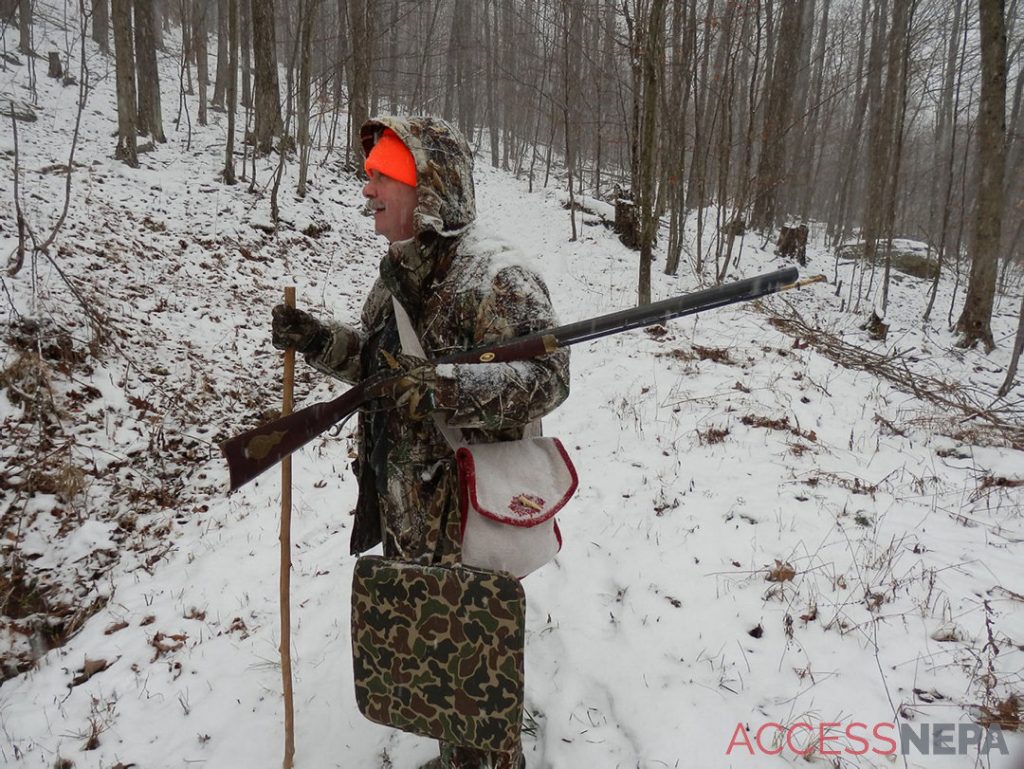 From the caribou camps in the Great White North of Quebec to the hunting lodges of the Deep South, six decades of filling tags with muzzleloader rifles and shotguns earned Dave Ehrig the title of “Mr. Blackpowder.”

Over the years, Ehrig shared his knowledge in videos and DVDs, television and radio interviews, newspaper columns and features, magazine articles and seminars. So respected is his knowledge that when the Pennsylvania Game Commission created what remains the lone flintlock-only deer season it called him in as an advisor.

A retired school teacher, Ehrig is chairman of the National Muzzle Loading Rifle Association’s Longhunter Program and is editor of the organization’s monthly magazine “Muzzle Blasts.” His book “Muzzleloading for Deer & Turkey” is considered the go-to source for muzzleloader hunting and earned the Book of the Year Award from the Pennsylvania Outdoor Writers Association.

“Knowing what to look for when buying a flintlock rifle can be confusing for a novice, who, in many cases, may not even know what they are looking for,” Ehrig said. “There is still time, however, to purchase and practice with a flintlock to have confidence when going afield for during flintlock deer season, which opened Dec. 26.

“As for purchasing a flintlock rifle, the most important consideration is to buy the one with the highest quality lock. That is why the rifles should be bought from a firearms dealer who understands the working of these rifles that basically are unchanged since the 1700s.

“In order to participate, a muzzleloader stamp must be purchased at a licensing agent, and either a buck or doe deer may be taken statewide with a back tag, but antler restrictions must be observed. Additional antlerless deer may only be taken with a wildlife management unit-specific antlerless license or DMAP tag.”

Ehrig said an important tactic for success in the post-Christmas flintlock muzzleloader deer season is an old mountain man saying: “Keep your nose to the wind, your back green and your powder dry.” This wisdom from two centuries ago still holds true today with successful late season flintlock hunts for deer being very weather dependent.

With the mating season finished and the calorie-rich foods from agricultural fields mostly erased because of clean farming, gleaning from the forests becomes much more important for whitetails, so learn the trees — particularly white and red oaks. Squirrels have long ago buried the acorns by now, but if the light-colored bark of white and chestnut oaks, or the rugged and darker colored red/black oaks, a hunter is located it is the right area.

Deer have an awesome sense of smell and can easily find and raid the caches of these calorie rich foods from squirrels. These are the spots to begin still hunting early in the morning because, after all, any creature needs to eat, but soon thereafter, start thinking about calorie conservatories.

These are the areas that are sheltered from the wind and are the low, wet areas that retain heat from the previous day’s sunlight. Rhododendrons, spicebush, alder and hemlock thickets thrive in these heat sinks — and so do deer.

Hunters who hold a flintlock rifle in their hands need close shots, those less than 100 yards. Over the years, much success has been had in these calorie conservatories.

“Use the wind as a friend, not an enemy, remembering it is estimated that whitetail deer can detect human scent at more than 1,400 yards,” Ehrig said. “Avoid being upwind of deer or as the old adage holds: “a downwind buck is a gone buck,” so if possible take advantage of the scent of other less experienced hunters who had spicy or seasoned food for breakfast or carelessly filled their truck’s gas tank before heading out to the woods.

“By allowing their scent to blow into your face by “keeping your nose — and that of the deer — to the wind” will win the day with deer “close encounters” as they scurry away from the scent of these intrusive aromas. These calorie conservatories and downwind deer yards can be thought of as “retreat” areas.

“Whitetails that have been pursued for more than four months by hunters wearing every type of clothing from camo through safety orange have become acutely aware of safe areas. These areas can be as close as a farmer’s corn crib, or as remote as a steep north-facing hillside, miles from the nearest parking lot, but remember a hunter’s silhouette is a deadly “give-away” to the presence of a predator, which is basis to the old saying of “keep your back green” by not being silhouetted against the skyline or the bare branches of a tree’s canopy.”

After all of these tactics, it is time for “the shot,” the success of which depends on having cleaned the barrel of grease and oil before loading that first round. Misfires and “flashes in the pan” happen to those hunters who fail to pay attention to details.

Slow velocity is no friend of hunters, but neither are last-minute changes to the amount of blackpowder charges, changing to replica powders and substitution of a different bullet type. Remember that lead roundballs mushroom back at about 900 feet per second, but copper-jacketed sabot bullets need at least 1,200 feet per second to mushroom to the same degree.

This mushrooming effect results in the hydrostatic shot that drops whitetails in their tracks. While there are many good modern bullets offered for muzzleloaders, the sad truth is only the patched roundball of soft lead performs the best in the slow rate or rotation in the rifling found in most flintlock rifles.

“Most of the carbine-type flintlocks available from several manufactures are ideal for deer hunting in Pennsylvania,” Ehrig said. “I recommend nothing less than .50-caliber, but a .54-caliber will give a bit more energy to the target and is capable of making a lethal, ethical shot at 100 yards.

“What has to be understood, however, flintlock hunting is a relatively short-range sport, and the majority of game I’ve shot in Pennsylvania and out of state has been at 50 yards or less. With muzzleloader hunting, shot placement is a bigger consideration than distance.

“For those buying their first flintlock rifle, the first, and most important, question should be which rifle has the highest-quality lock. That’s where everything starts, and after that, it’s a matter of practice — and luck.”

Copies of “Muzzleloader Hunting for Deer & Turkey” are available online, and for autographed copies, send a check for $29.95 to Dave Ehrig, Box 66, Mertztown, PA 19539.

DOYLE DIETZ is parliamentarian of the Pennsylvania Outdoor Writers Association.