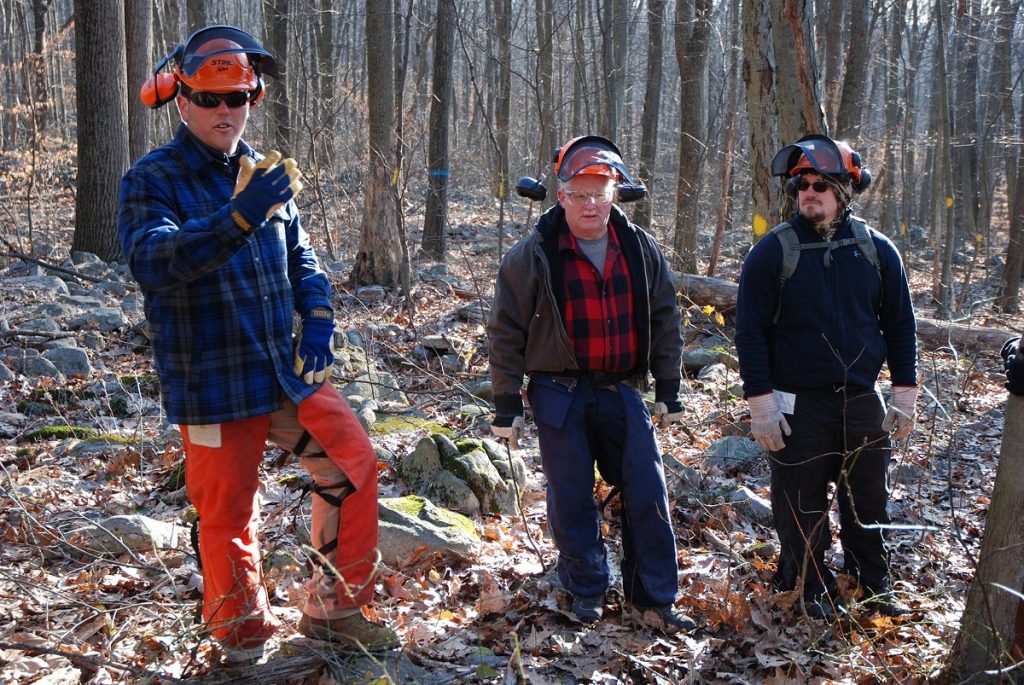 When it comes to wildlife conservation, no two words are more essential than food and cover, which is why the Pennsylvania Game Commission habitat crew consisting of Drew Lambert, Dave Hummel and Justin Clark works so hard to improve State Game Lands food and cover on a daily basis.

“On any given day, our crew is busy planting food plots, collecting trash, conducting controlled burns, stocking pheasants, marking borders, removing invasives, you name it,” crew supervisor Lambert said. “With literally thousands of acres under our management, it’s a lot for a three-man team to maintain, but it’s really important work for the birds and wildlife that call these public lands home.”

That is why Lambert’s crew was more than happy to partner with Quality Deer Management Association and Backcountry Hunters and Anglers volunteers recently for an 18-acre noncommercial habitat improvement project on SGL 80 in Bethel Township in Lebanon County.

In February more than a dozen volunteers from Dauphin, Chester, Schuylkill, Lancaster, Bucks, Montgomery, Lebanon, Berks, Philadelphia and York counties sacrificed a Saturday off from work to lend a hand with a prescribed timber cut intended to regenerate young oak trees on the tract of a closed-canopy mixed hardwood forest.

“This has been a dream of mine for 10 years now,” QDMA Pennsylvania state advisory chairman Rick Watts said. “Really leveraging the excitement and ambition of conservation groups to work together on behalf of our wildlife is great to foster this relationship, get an education and hopefully set the stage for future opportunities to collaborate.”

The day started with an in-depth primer on safety by Lambert and an informational discussion on tree identification and timber regeneration by PGC forester Curtis Noll.

“Within the stand, scarlet and black oaks predominantly occupy the over story, while other mature oaks, American beech and an occasional yellow poplar are also dominant in the stand,” Noll said. “A mixture of red maple, black gum, sweet birch and sassafras stems dominates the mid-story, and a mixture of shrubs, including maple-leaf viburnum, American hazelnut, and patches of black huckleberry, dominates the understory.”

Scattered patches of established oak seedlings are located in areas where the mid-story is less dense, and that is what the project is trying to support. Noll prescribed cutting competing trees 6 inches and less in diameter, excluding oaks, hickories, beech, dogwoods and serviceberry, and the resulting low-shade removal treatment is aimed to create an open forest structure in which light conditions allow pre-established oak seedlings to increase in height and competitiveness.

“Wildlife habitat improvements include increased soft and hard mast production in canopy gaps from hazelnut, viburnum and huckleberry, in addition to improved oak recruitment,” Noll said. “American hazelnut is an important mast producing species that bears fruits more calorie-dense than acorns or beechnuts, and they are a favorite of squirrels, deer, ruffed grouse, and Eastern cottontails also readily browse on the twigs and catkins of hazelnut.”

Best of all, oak trees, which had been hit hard by oak leaf rollers in recent years, were given a better chance of survival, while other wildlife favorites can thrive.

By mid-afternoon, the hardworking volunteers had made a big dent, cutting roughly one-third of the prescribed 18 acres of the habitat project.

“This was an amazing day with the turnout and everyone who helped. Dave, Justin and I are extremely grateful for those guys giving up a Saturday to get over six acres done in only a few hours,” Lambert said. “Partnerships like this are invaluable because it brings hunters and outdoors people together to make a satisfying difference on game lands for habitat and wildlife.”

Similar joint habitat projects already took place in York and Bradford counties, with more on the docket for later this year. Lambert called the projects a “win-win for everyone involved,’’ adding that making a small contribution has a huge impact on the success of habitat and wildlife for years to come.

Frantz is president of the Pennsylvania Outdoor Writers Association. Contact him at outdoors@republicanherald.com.