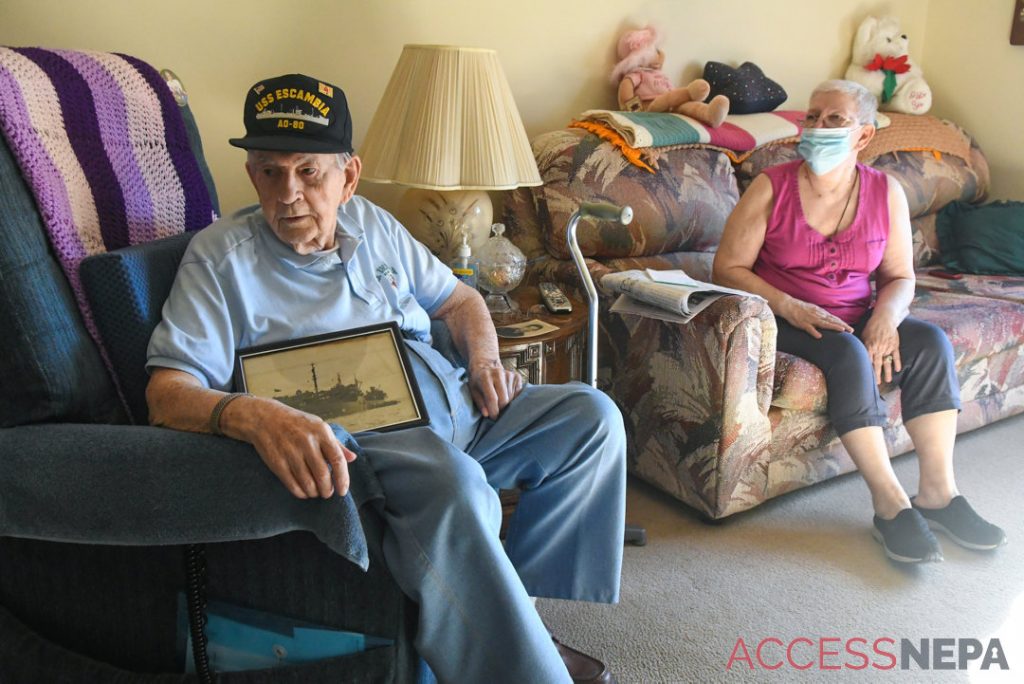 Schuylkill County man served on ship that was lifeline for troops

TOWER CITY — Charles Fox traveled the high seas during his service time in the U.S. Navy in World War II, supplying the war effort in the Pacific Theater.

While he wasn’t on a battleship, that didn’t mean that he and his shipmates didn’t encounter trouble.

A native of Rock and a resident of Tower City with his wife, Doris, the 94-year-old veteran remembers going back and forth among various ports to pick up essential supplies for the 7th Fleet.

“We were a transport that hauled ammunition, fuel, food, everything,” Fox said. “We were out on the ocean for 20 months.”

He told how they were allowed a beer “now and then.”

“When we would go to an island for fuel, we would have a little party. When we were at the equator, it was so hot that the beer was like, ahh, it was warm,” he said.

Navy through and through, when the Republican Herald visited Fox this week, he proudly put on his ball cap bearing the name of his ship: U.S.S. Escambia AO-80. The “O” stands for “oiler.”

The U.S.S. Escambia was the lead ship of her subclass of the Suamico class of fleet oilers acquired by the Navy in World War II. For her valiant efforts, the ship received five battle stars during the war. Being a supply ship, it was an easy and important target for the Japanese.

During his senior year at Cressona High School, Fox, only 17, decided to enlist in the Navy. Since he would be 18 when he was finished three months of boot camp, he was given the go-ahead, which also meant he left before finishing his classes. Fox was recognized at the graduation ceremony in absentia.

After boot camp, Fox boarded a troop train at Philadelphia headed for California. Before he was anywhere near combat, he and his companions were fired upon.

“We laid over in St. Louis when we were shot at,” he said. “Three or four bullets hit the train, all loaded with servicemen. We have no idea why someone shot at us and we never found out. We stayed in St. Louis for a day and a half and we were not allowed to leave the train.”

The ship made a brief layover in 1943 at Pearl Harbor on its way to join the Seventh Fleet. Fox said everyone remained on the ship because of security.

“We saw some of the ships and saw how damaged they were,” he said. “It wasn’t nice seeing some of those ships and the way they looked. We could only see from the decks. There were MPs all over the place. We stayed there for about a day and a half and then left for New Hebrides because we had supplies that were needed by Admiral Halsey.” 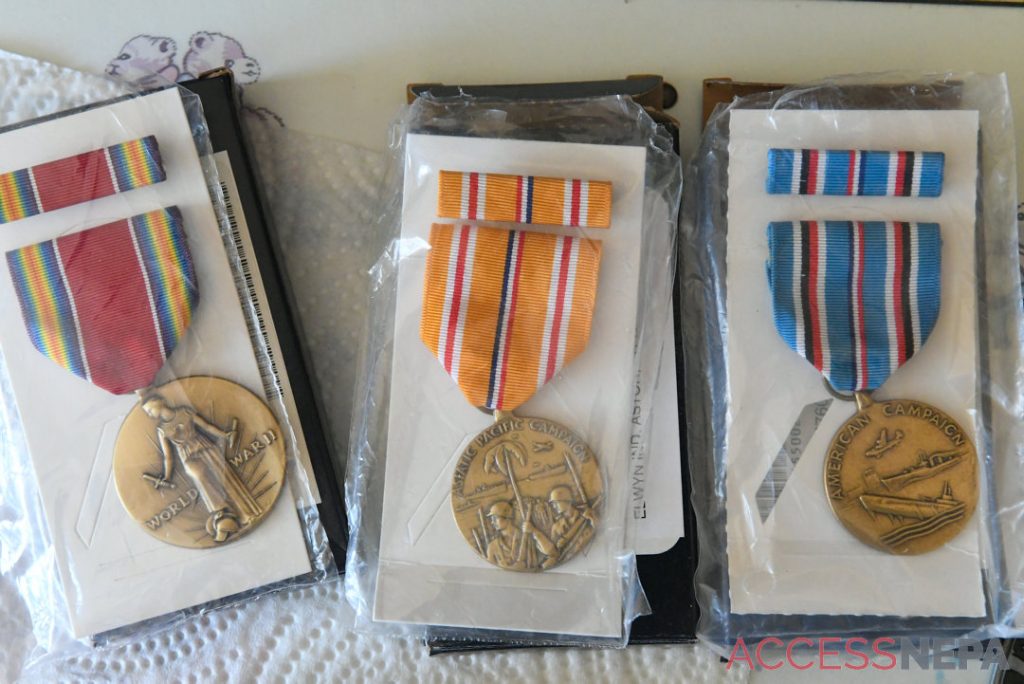 Dangers from above, below

New Hebrides were islands off the northern coast of Australia. The current names is Vanuatu.

“We were always with the fleet in the background,” he said. “I remember when we were ready to go to Okinawa and were loaded up with ammunition and fuel for the aircraft. They gave us two escorts (ships). On the first night out, we lost the first one, and on the next day we lost the second one. They were lost because of submarines.”

The dangers were always around the fleet, on the surface, under the sea and in the air.

“When we pulled into Okinawa, it was getting dark. The Japanese pilots were bombing all over the place. We couldn’t put our lights on because, if they would have hit us, there wouldn’t be anything left of us.”

One of the crew fell overboard at Okinawa and was lost.

“There was a boatswain’s mate from either Scranton or Wilkes-Barre. He was in the service for a long time,” Fox said. “The ship was rolling back and forth and something broke loose. He was trying to tie it down and was washed overboard. The captain said we can’t turn around because we were loaded and had to keep moving. We had all this ammunition and fuel for the airplanes.”

There was smoke rising from different spots on the island, which was something that would divert attacks on the ship.

“I was called by the captain and he said tell those guys keep making all the smoke they can and we’ll give them all the ice cream they want. We had a machine that made ice cream on board,” Fox said. “We got unloaded and the next morning we left, but we were hit, but we were high enough in the water that where we were hit was above the waterline. We went back to the states to get fixed up and came back.”

Admiral ‘one of the best’

He remembered when the Escambia met up with its sister ship, though he wasn’t sure of the name.

“We were in harbor and were preparing to leave the next day. We were told to get everything off that we didn’t need and make sure we had enough to get back. We also had wounded onboard,” he said. “I’d say it was about 5 or 6 o’clock in the morning when I was sleeping on the top deck and I felt water and thought it was raining. I got up and took a look and heard all this commotion and found out the Japanese hit our sister ship. We were supposed to be alongside her and I didn’t get the captain up in time because I overslept. We were lucky.”

Fox said his ship had a young captain who was good at his duties. Fox was also impressed with Admiral William “Bull” Halsey Jr.

“Halsey was one of the best, I think,” he said. “He was nice and didn’t act like a big shot. He was always quick with a congratulations. And our captain was real good. He took everything seriously. He would say, ‘I can’t lose a man,’ since it was too hard for him.”

“The captain’s daughter still sends letters out to keep track of how many are left yet,” Doris said. 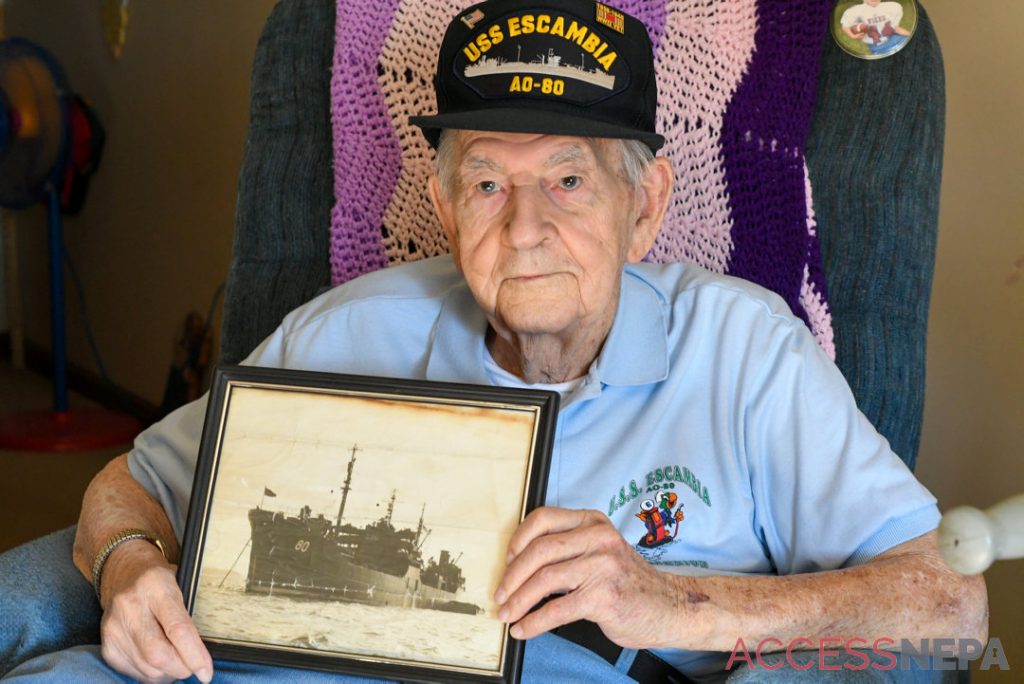 Fox was honorably discharged in 1946.

“We got on a train and traveled to the Philadelphia Navy Yard, and when we got there, we had to get an apartment and worked at the commissary,” he said. “I asked the guy in charge about our bags not getting there yet. I never got them. All I had was in the duffel bag with me. All my clothes were in there. I had two tailor-made suits. I had my pistol in my bags.”

After all these years, Fox does have nightmares about those war times.

“One night he was kicking and kicking when he was sleeping in the lounge chair,” Doris said. “I heard it and came running in and asked him what was the matter. He said he was kicking the Japs.”

Fox can get around with some help with a walker and still drives, though only in daytime hours. He is proud of his military service, including the opportunity to be entertained by stars like Doris Day, Hank Williams Sr. and Bob Hope.

Also displayed at the Fox home are his many service medals, pins and ribbons: World War II Victory Medal, American Campaign Medal, Asiatic Pacific Campaign Medal, Combat Action Ribbon, Discharge Button and Honorable Service Lapel Pin (Ruptured Duck). Most of the medals were acquired about three years ago with the help of the Schuylkill County Veterans Affairs office. Fox is waiting for his Philippine Liberation Medal.

The medals, along with a Japanese rifle, uniforms and other personal items, disappeared after the war when he was discharged in 1946 with the rank of Seaman 1st Class. Everything was being shipped from California to Philadelphia and was lost, something other servicemen suffered as well.