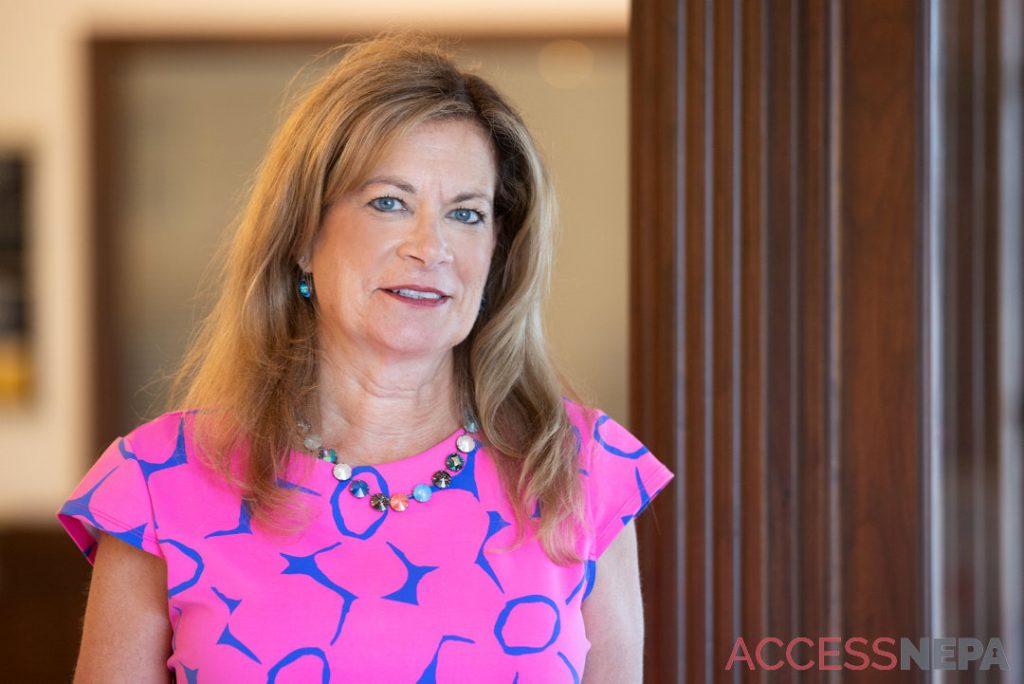 There’s a phrase from the Gospel of Luke that stands out to Mary Beth D’Andrea, and it’s one she’s lived up to throughout her career: “To whom much is given, much is expected.”

A senior vice president at Community Bank, D’Andrea has been a longtime leader in the region’s financial community but also helped its residents beyond the walls of her Scranton office. Through the years, she has helped with a range of service-oriented groups, including the Kiwanis Club of Scranton, Serving Seniors Inc., the Salvation Army, the Arc of Northeastern Pennsylvania and UCP of NEPA. D’Andrea has served on various boards and committees, too.

“I always wanted to give back, and I wanted to set a positive example for my son that you can use your talents in this world,” she said. “I wanted to show him how everybody has talent and you can contribute to society.”

D’Andrea grew up in Allentown and started working at 15 at different businesses. She had always liked math and had a business mind, which she realized she could meld with her people skills into a career. D’Andrea came to Northeast Pennsylvania to study at University of Scranton, where she earned a bachelor’s degree in accounting and later a master’s degree in business administration.

After finishing her undergraduate studies, D’Andrea worked at Penn Medicine for a couple years and then moved back to NEPA to work as a financial analyst for a bank. She’s held a few different jobs for various banks through the years and has been at Community Bank for the last 19. D’Andrea does business banking and helps companies “with all of their financial needs.”

“I like working with the people,” said D’Andrea, who lives in Roaring Brook Twp. “I like helping … business owners obtain their business goals. (It’s) not just a sit-behind-your-desk job.”

D’Andrea called her experience as a woman in business “very positive,” with men and women being treated equally. But she also knows she can make difference.

“I think I bring a different perspective into a male-dominated industry,” she said.

D’Andrea has remained committed to her alma mater as well, previously serving on the U of S alumni society advisory board and as president of its Lehigh Valley chapter. She has enjoyed talking to U of S students about careers, women in business and “just life after Scranton.”

She’s also made an impact in other corners of the community. Shoppers might recognize D’Andrea from her work as a bell ringer for the Salvation Army’s annual kettle campaign each holiday season, which usually sends her to Walmart or Sam’s Club for some shifts.

D’Andrea felt herself drawn to helping the Arc, meanwhile, because she has a cousin with special needs, and she saw the impact organizations like it made on that relative. Personal experience with her parents also attracted D’Andrea to Serving Seniors.

“It’s just nice to see how there are organizations that help aging seniors in our area,” she said.

Volunteering with the Kiwanis Club has given D’Andrea a chance to help children in the community through fundraisers and programs, including helping at St. Joseph Center’s annual dinner. One program D’Andrea started while president of the Kiwanis Club continues to live on, a fact she’s proud of. Whenever the club hosted a speaker for a luncheon, it would donate a book to Lackawanna County Children’s Library in that person’s name, with a sticker in the book denoting the honor.

Looking out for today’s youth is a large part many of D’Andrea’s charitable efforts.

“I always say I want to leave the world a cleaner, greener place for the next generation,” she said.

D’Andrea loved experiencing the joys of the different ages as her own son grew up, from teaching him to tie his shoes to touring colleges. More recently, they lived together for 11 months during the pandemic, which despite the circumstances, “was a unique and almost joyful experience,” D’Andrea said.

“We had an awesome time,” she added.

Now 29, her son lives in Philadelphia and followed her example, earning bachelor’s and master’s degrees from U of S. D’Andrea tried to be a positive influence on him, she said, and is “proud to see the man he became.” He was there for her, too, when she finished running the Scranton Half Marathon after joining a local running club, Can’t Is Not an Option.

“It was a sense of total excitement,” D’Andrea recalled.

D’Andrea feels she was given certain gifts and talents, which she hopes to use to help others. She enjoys seeing how grateful and happy it makes them, and she wants to know that she made a positive impact on anyone whose life she touched.

“I always wanted to make a difference,” she said.