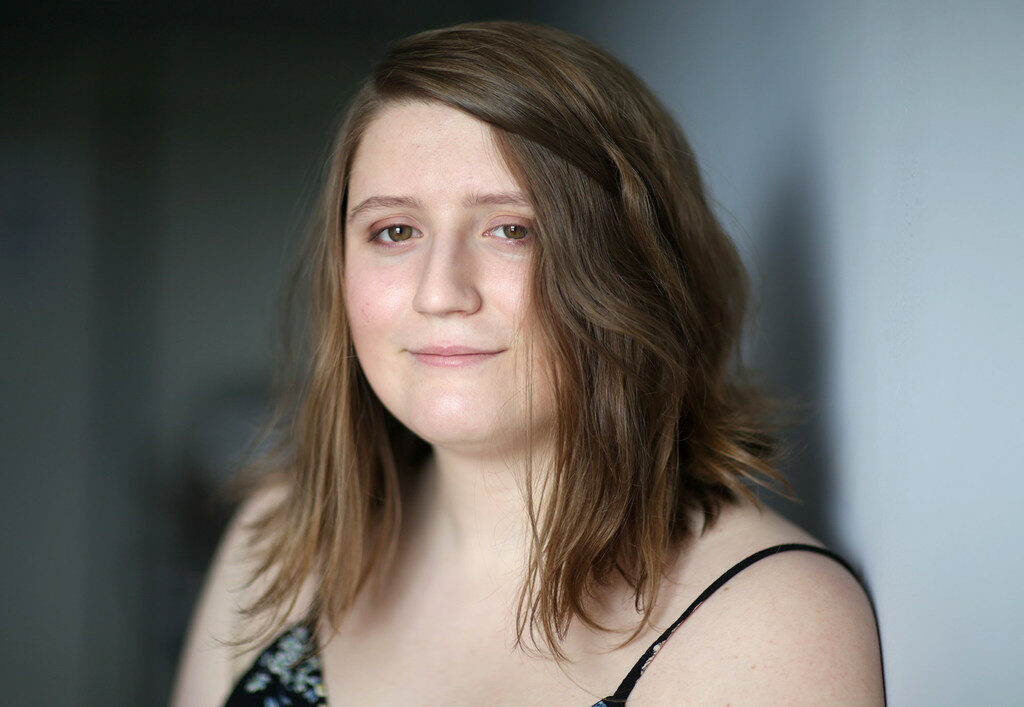 Sophia Krupsha took one of the darkest moments of her life and joined forces with others to share their stories about sexual assault in an art exhibit in State College.

Krupsha, who lives in Kingston, headed to college intending to study science, but she realized she would not be happy in that field and instead switched to a longtime passion, fine arts, during college orientation.

“I’ve always kind of been interested in art,” she said, noting that she has no regrets about changing her mind. “I was drawing since I could hold a pencil.” 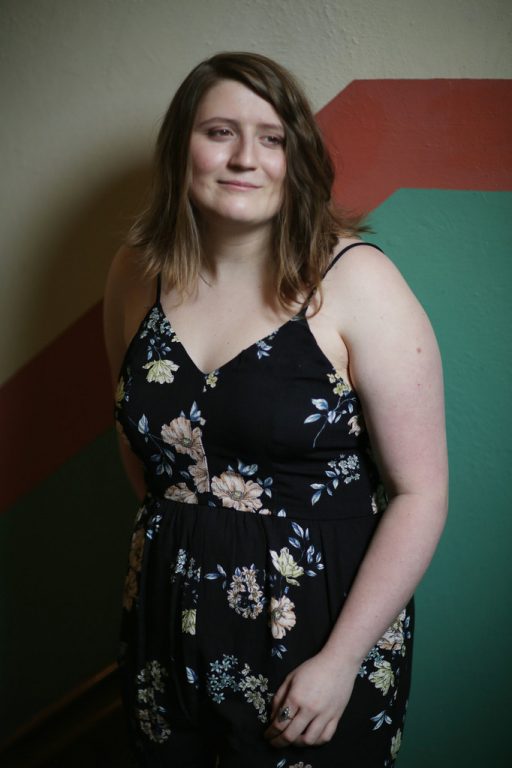 JAKE DANNA STEVENS / STAFF PHOTOGRAPHER
Sophia Krupsha, a rising junior at Penn State University and a sexual assault survivor, curated an exhibit at the University Park campus focusing on that topic, its aftermath and how Penn State addresses it.

At Penn State, she earned official placement in the program on her first try her freshman year. Krupsha has shown her work in Penn State’s student-run gallery, for which she serves as treasurer, and academically pushes herself as hard as she can.

“I’m the person that takes all the harder classes,” Krupsha said. “I’m not screwing around. Like, I want my career, and I want it now.”

After graduating from Penn State, Krupsha hopes to earn a master’s degree and begin a career in curating or as a professional artist. The work she put into May’s exhibit allowed her to taste both of those worlds.

The show — dubbed “Timely Warnings” after the alerts the university sends to the community about potential threats — grew out of a sculpture course she took last fall, when she had to write a paper about an artist and then craft a political sculpture from it. Then-Judge Brett Kavanaugh’s Supreme Court confirmation hearing, which involved allegations of sexual misconduct, inspired Krupsha’s work, and she realized that of her eight classmates — all women — about six focused their work on sexual assault.

“After the critique, like having all the work there and kind of having conversations with each other, it really clicked, like, this should be a show,” Krupsha said.

Krupsha is one of the unfortunate many who can speak about the #MeToo movement — an international initiative that shows people they are not alone in surviving sexual violence — with authority as a result of enduring a sexual assault as a teenager. In the summer before her freshman year of college, Krupsha traveled to the New Jersey shore with three close friends, all guys, and woke one night to find one the men fondling her body. Assuming he thought she was asleep, she decided to pretend to wake up and go to the bathroom.

“I’m going to come back, and I’m going to hope this was just a fluke, because I don’t want to accuse a good friend of doing something like this; this is a serious allegation,” Krupsha recalled thinking. “And I went back to bed against (my) better judgment, and that’s when he … just started getting worse and worse with it, and I just — like, you don’t know. You can’t move. You’re kind of like shocked that it’s happening.”

Knowing her friend could overpower her, she worried about how to escape.

“I couldn’t push him away,” Krupsha said. “I’m just like, I’m going to wait until this is over, because what if I do do something and he, like, attacks me, because this guy is bigger than me, and I don’t want to screw with that.”

After the assault, she fled to the safety of another friend’s room, where she tearfully woke him up and told him what had happened. That other friend later confronted the man who assaulted her, Krupsha said.

“His excuse was something like, ‘I wanted to see if I was gay, but I didn’t want to ask her,’” she recalled.

Krupsha has not pressed charges against the man, although she continues to consider it. But she faced the kind of criticism so many other women in similar situations have faced, with one relative outside her immediate family who told her that she shouldn’t have put herself in that situation.

And so with this personal history, the idea for an exhibit focused on sexual assault “kind of rolled around” in Krupsha’s head for a while, she said. It really took off last semester when a friend broke up with a guy who had made numerous negative comments toward her — such as “You’re a joke because of your major” and “I like playing with your emotions — it’s fun getting a reaction out of you.” The friend shared some of the comments publicly with a related hashtag, and it gained some traction.

“I’m like, you know what? That needs to be shown more,” Krupsha said. “This is really important, and it’s again shocking that of all the people in my program … there’s so much work on this.”

Krupsha gained support for the exhibit from her professor, Cristin Millett, and the process of taking it from Krupsha’s mind to the gallery walls began. With the help of Lindsey Landfried, who works in student affairs for Penn State, she secured the HUB-Robeson Galleries around the end of March and had just a few weeks to prepare for a May gallery opening.

Landfried said Penn State was “glad to help scaffold (Krupsha’s) success in the project.” She saw that many of Krupsha’s fellow students not only made work about sexual assault but also participated in “this very important national conversation about safety and support for women, whether it’s in their college experience, in their work or in their lives at large.”

“(Krupsha) had clearly garnered a lot of support from her colleagues and from her fellow students, and they were able to pull it off in a very successful way,” Landfriend said.

Krupsha opened the call for work not just to art majors but the entire community and planned for the exhibit “to be in conversation with how Penn State has reacted to sexual assault on campus.” She received more than 20 pieces in a range of mediums, including from professors, art majors and a non-art major.

In the end, she organized the work into a show that also addressed the aftermath of sexual assault and how the university addresses it not just through efforts on campus but also activism. One used string art to write “Time’s up,” while Krupsha’s friend took her ex-boyfriend’s comments and turned them into a piece, too. The show ran from May 6 to 19, and Krupsha called her first time seeing the show up “magical.” 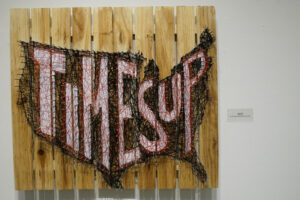 As students passed through the HUB, Landfried said, many did doubletakes as they saw the exhibit and stopped to look at it.

“It really would stop them in their tracks,” she said. “There were some text-based pieces that I heard people reading out loud.”

A Penn State police officer even attended the opening reception, Krupsha said, and she “had a great conversation” with him about sexual assault and the campus.

“He thought (the exhibit) was great and cathartic for people who had been victims of it to display their art, and he also thought it was extremely necessary since Penn State … (is) very vocal about issues with campus life, especially sexual assault on campus, but there’s still things we could be doing better,” Krupsha said. “And he said, ‘Yeah, this absolutely needed to happen, and I’m impressed with the quality of the work and how open everyone has been.’ And that was pretty awesome.”

While family members knew of what Krupsha endured, the art exhibit exposed her situation, and those of the other artists, more than ever.

“I’m not ashamed of it,” Krupsha said of her assault. “There’s nothing to be ashamed of. This is why I did this.”

And as the police officer guessed, the exhibit was cathartic for her.

“It was definitely important to me to use what happened to me to empower others and bring more attention to the issue,” Krupsha said, adding, “It’s something I’ve come to terms with … but it’s still something that feels like I shouldn’t talk about it.”

Krupsha, who enjoyed the opportunity to curate an exhibit, hopes to build on “Timely Warnings,” possibly turning it into a yearly or bi-yearly exhibition.

“This is not the end of this show,” she said.