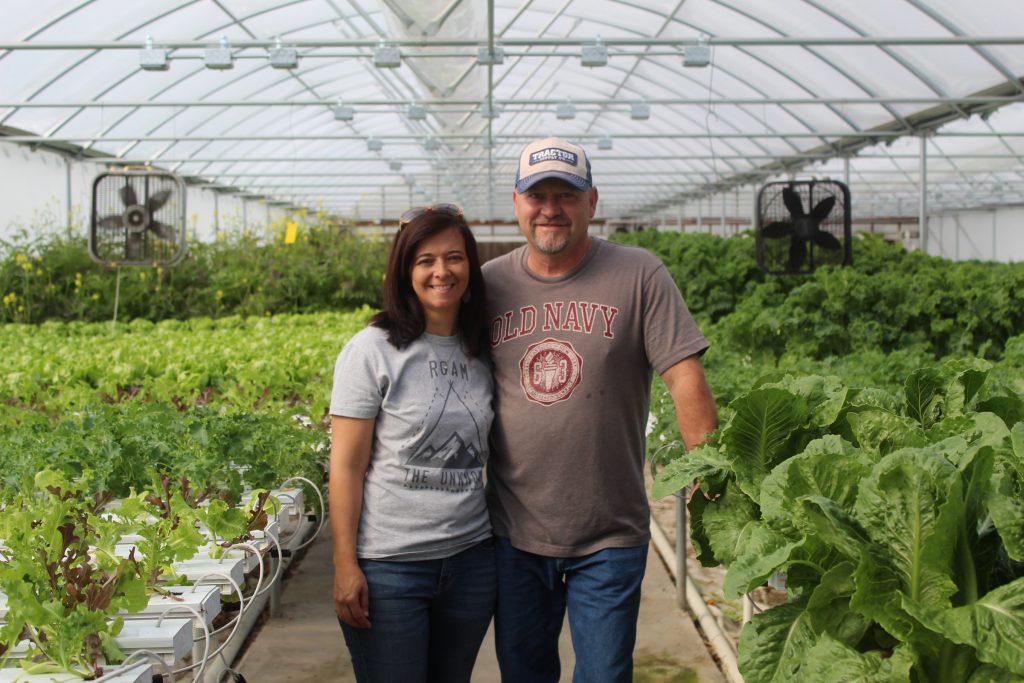 The Falls farm always has around 10,000 plants from seven different lettuce varieties in rotation, all of which are hydroponically grown in greenhouses year round.

Seven years ago, owners Bill and Amanda Banta realized farming is something they would love to pursue, and they left their full-time jobs to make it a reality.

Bill worked for the state, but grew up on a small family farm with animals and vegetable crops. Amanda was a nurse and grew up on the farm they run today.

“At that time, no one else was growing year round,” Amanda Banta said. “We thought the community needed locally grown, fresh produce that’s pesticide free.”

With the hydroponic method, plants are grown without soil and instead get necessary nutrients from water.

Because of the controlled greenhouse environment, there are minimal pests, making the use of pesticides unnecessary.

The harvest lettuce still has its roots attached, she explained, meaning it’s alive when picked.

Banta said hydroponic lettuce tends to stay fresh longer, so customers don’t need to worry about it quickly browning in the fridge.

A lot of hydroponic consumers have also told the Bantas that their lettuce doesn’t cause upset stomachs like other types, which she thinks can be attributed to the lack of pesticide.

The couple started out selling their crops mostly in farmers markets, and continue to do so, but have also expanded to provide produce for around 15 area restaurants.

They’re responsible for starting the Tunkhannock Farmers Market at Creekside Gardens, which opens for the season on Saturday, June 22 and has a Food Truck Friday event planned for Friday, June 14.

However, their latest endeavor is a farm-to-table restaurant in Scranton called The Wandering Hen, located at 305 Penn Ave., which opened in November of 2018.

The Wandering Hen has been well-received so far, Banta said, and a lot of customers enjoy the marketplace within the cafe.

“In the marketplace we have all locally sourced products to buy, everything from eggs and cheese to maple syrup and honey,” she said. “Everything is locally sourced on the menu. It’s a very healthy menu and you can ask any of our servers exactly where your food comes from.”

“The best thing for us has been the relationship that we have formed with our chefs and our customers, knowing that we’re giving them a product they can’t buy anywhere else in the grocery store,” she said. “They truly appreciate all of the hard work that we’ve put into this.”

Banta was working in the cafe full-time, but is now easing back into joining her husband in the greenhouse a few days each week.

“It’s too much in the greenhouse for one person,” she said. “It’s a lot of work.”

As owners of a small family operation, those at Rowlands Pennsylvania Produce also aim to give back to others who share their values.

That’s why The Wandering Hen has helped raise around $38,000 with NEPA Chefs for Sustainability through two charity dinners to help small farms in need.

“It’s a passion of our’s to help these small farms. It’s their livelihood,” she said. “There’s too many farms now that are shutting down and going out of business. It’s very important for customers to come to the farmers market to buy locally sourced food and get to know your farmer because they’ll tell you exactly how their products are grown.”