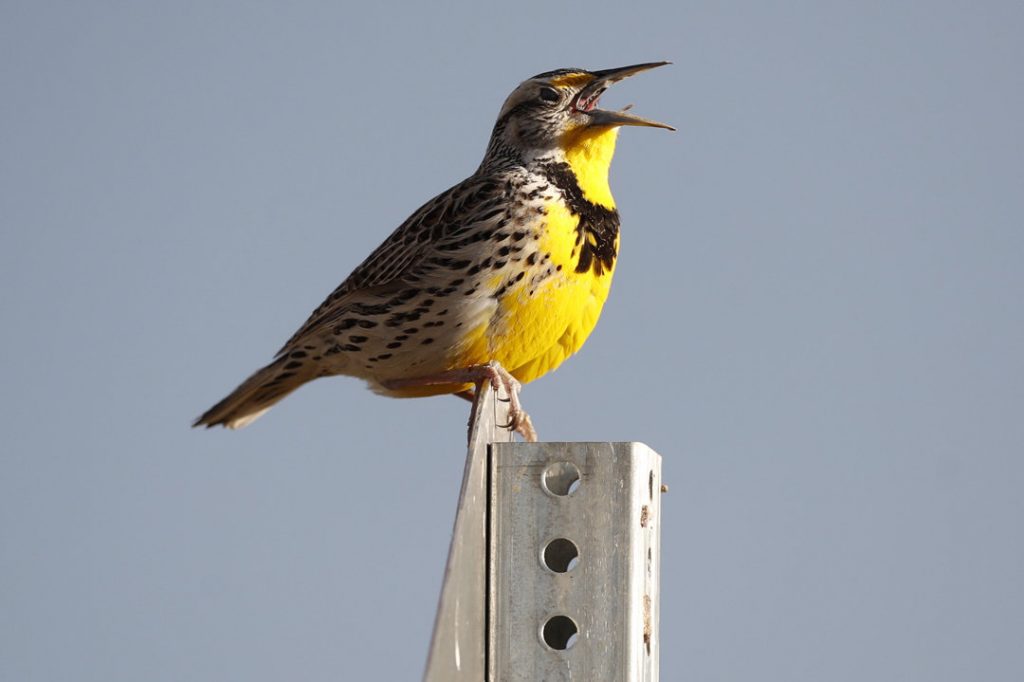 Meadowlarks: The flutists of our hayfields

An eastern meadowlark may not be as eye-catching as a brightly colored goldfinch, but it’s flute-like song will take your breath away.

In fact, that song is a favorite of bird researcher David Barber, now a senior research biologist at Hawk Mountain’s Acopian Center for Conservation Learning in Orwigsburg.

“When working in Florida and conducting early-morning bird surveys in native prairies, as the sun was rising, the air was filled with the songs of meadowlarks,” Barber recalled. “Males would perch on the tallest vegetation, heads thrown back, singing their hearts out.”

These serenading songbirds also live and breed in Pennsylvania, but they need our help.

The habitat they rely on to survive is vanishing at a staggering pace.

Eastern meadowlarks are not actually larks, but members of the blackbird family, just like orioles. And they spend a lot of time on the ground — it’s not only where they foraging for insects, it’s where they build nests and raise their young, too.

They also nest on the ground in grasslands and prairies, hayfields and pastures and generally need a minimum of six acres of natural, grassy habitat (not mowed lawns) to establish territory. But we’re losing this habitat at a dizzying pace to warehouse and housing developments and row crops and — and the decline of meadowlarks mirrors the loss.

Nationally, results from the North American Breeding Bird Survey indicate an 89% decline between 1966 and 2015. In Pennsylvania, it’s considered a species of greatest conservation concern, and short term trends indicate a decline of 11% to 40% in the state over the last 10 years.

“There are very few native grasslands left and many small farms have been replaced by large industrial farming that do not have these varied grassy habitats,” Barber said. “In addition, hayfields are often cut during the nesting season, resulting in the loss of nests and/or nestlings. Overgrazing of fields and pesticide use are also considered threats.”

Other birds that hunt and/or nest in native grasslands are also impacted, including species like the American kestrel, grasshopper sparrow, bobolink and northern harrier.

Eastern Meadowlarks can produce several nests and will breed starting in late April through early August, so delaying mowing in hayfields during that period is ideal. Still, that isn’t practical for many farmers, so delaying the first cutting could potentially allow at least the first nest of young a shot at survival.

“I would say first that farmers can also help the species by leaving fields fallow for a year to provide nesting habitat, delay harvesting hay until after the breeding season and reduce the use of pesticides,” Barber said, noting that folks who don’t live on farms can support conservation organizations and land trusts that work to restore native habitat.

“Over 3 billion birds have been lost in the last 50 years, and grassland species have declined by 50%,” Barber said. “Strong signals like this suggest that something is very wrong with our ecosystem, and we need to listen to these signals.”

Zerbe can be reached at leah.zerbe@gmail.com.