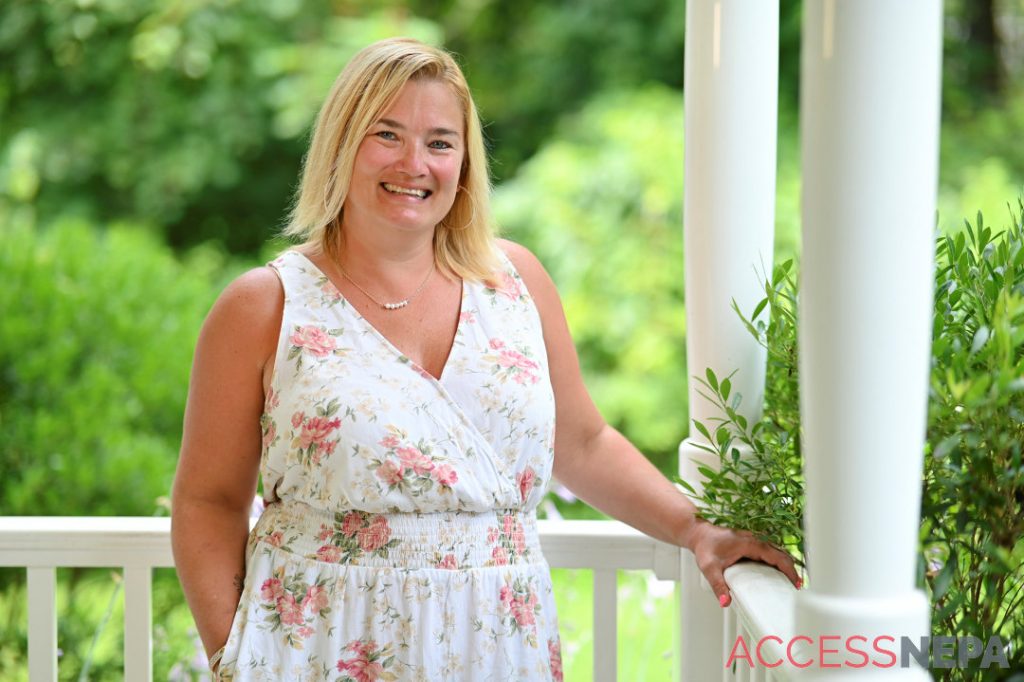 Debbie Musgrave thought she’d pick up a part-time gig to get out of the house after spending 15 years as a stay-at-home mom. She ended up landing a career in education.

A devoted mom of three with a natural sense of humor she’s shared with the world on her blog, Musgrave started a new chapter recently as a teacher’s aide and substitute teacher at Abington Heights Middle School. It’s a career she didn’t consider after graduating from Bishop Hannan High School in the ’90s.

“When I went to college, they were almost discouraging people from getting into teaching. … There were no teaching jobs around here,” the Newton Twp. resident said. “I just thought, ‘Oh, that’s not a field that’s growing right now.’”

Instead, Musgrave decided to study psychology at Bloomsburg University.

“I took psychology in high school, and I just absolutely loved the class,” she said. “I’m definitely a people person.”

Musgrave later realized that she’d need a master’s degree to really put her psychology training to good use, but she couldn’t afford advanced studies. She had a business minor, though, and began working for Commonwealth Telephone Co., a forerunner of Frontier Communications.

She had met her husband, David, at Bloomsburg when she was 19 and knew within a couple weeks that she wanted to marry him. They had common goals, she said, and when they had their son, Evan, she felt strongly that she wanted to follow her own mother’s example and be a stay-at-home mom. Another son, Drew, and a daughter, Ella, followed within the next few years.

Musgrave kept busy raising them and helping with the elementary school PTA, for which she served as treasurer, took part in committees and planned events, while also meeting other moms who formed a natural support group. As her kids grew, Musgrave got involved with the booster clubs for the middle and high school soccer teams, too.

With her kids now in upper grades, Musgrave realized they didn’t need her as much anymore, and so she decided to switch things up by substitute teaching a few days a week in the 2019-20 school year. Then COVID-19 hit.

“My husband would be sitting here working from home, and then my three kids would each be in their own bedroom. They only came out to see me when they were hungry,” she joked.

Even though quarantine and online learning came with unique challenges, it had some bright spots, too. With no activities to rush off to, the Musgraves could enjoy dinner as a whole family each night. Musgrave also decided to write down and share the funny things happening in her family at the time, and on the encouragement of others, she started a blog and Facebook page, “Mom With a Blog.Online.” Her funny posts attracted not only family and friends but people the world over, which amazed her.

“There’s people on there that I never met. … It was nice to have that interaction with them,” Musgrave said.

She went back to work again last October, this time as a building aide, when Abington Heights moved to hybrid learning. After the long-term substitute teacher the district had lined up for a class fell through, however, Musgrave found herself in the job.

“At first I resisted because no way am I teaching eighth-grade science,” she recalled. “Before I knew it, I had already been doing it for two weeks.”

Her two younger kids enjoyed coming to and leaving school with her each day.

“My (older) son was like, ‘Please don’t come to the high school,’” she said with a laugh. “The other two were in middle school last year. They really liked it. … The only thing they didn’t like was I’m very loud and I like to talk.”

Musgrave had obtained an emergency teaching certification so she could sub the year before, and this summer she started pursuing a master’s degree with a certification in teaching social studies for grades four to eight. But first, she held a family meeting to ensure that such a big lifestyle change was right for them all.

“Even when my kids were having a hard time during COVID, (I said), ‘Is this too much for my family, me working? Because if it is, I’ll stop,’” she recalled. “They said, ‘No way.’”

This school year, Musgrave will be a special-education and general education teacher’s aide. She loves the middle-level grades, noting that she can relate to and feel a connection with those students. It helped, too, that she already knew a lot of the kids through her own children. And it feels good to know the kids need her, she added.

“I think that since I’ve just loved being a mom so much … I feel like I relate,” Musgrave said. “I have two kids in that age group right now, and I have one in high school. It just seems like a natural progression.”

Musgrave — whose kids all play soccer — also recently was part of a group that successfully petitioned the school district to establish a girls’ junior high soccer team. She even spoke about it at a school board meeting.

“They’ve tried (to establish it) before, so I don’t know if the timing was just right, but it was a huge accomplishment,” Musgrave said, calling it “very rewarding.”

The kids feel excited, Musgrave said, in part because the coach of their travel soccer team, Emma Black, will helm the new group.

Musgrave looks forward to school starting, although the year also will be bittersweet as Evan enters his senior year and prepares to leave the nest she built for him. She called him a good big brother who “has such a big presence in our house.”

And as much as Musgrave enjoys teaching, nothing can ever beat her time as a stay-at-home mom.

“I would go back and relieve every single day of it,” she said. “It was my favorite 15 years of my life.”