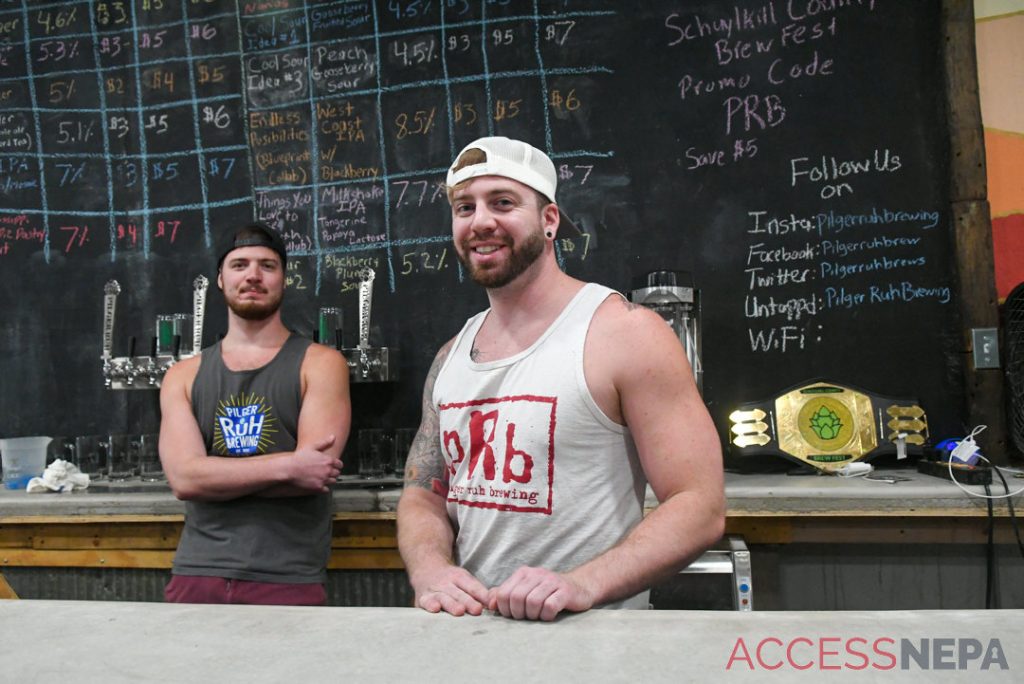 POTTSVILLE — Brothers Conlan and Tyler Budwash said Saturday they have brought their ideas for a good brewery to downtown Pottsville and hope people enjoy them.

“We traveled the state and country trying different breweries,” Conlan Budwash said from behind the bar at Pilger Ruh Brewing, 213-215 N. Centre St. “We found out what we liked and decided to bring it to Pottsville.”

Tyler Budwash said he is the co-owner with friend Tony Deppen, while his brother is the brewer. He said he hopes the brewery, the term he accents, appeals to everyone.

“Craft beer is for everyone. We’re not a bar. That’s why we close early,” he said.

They do serve beer, however, and lots of kinds, according to Conlan Budwash.

“We offer all styles,” including IPAs, sours and stouts, he said. “We even do seltzers, classic styles like pilsners. We have a wide variety of everything. There’s no limitation as to what we can do.”

The Budwashes opened the brewery this weekend at the site of the former Coney Island restaurant, next to the Majestic Theater.

The building has a 25-foot bar, along with tables and chairs for patrons. There also are pictures on the walls that are for sale, another potential draw for people.

Saturday’s patrons enjoyed their beverages and the atmosphere.

Mike and Randi Feese, of Shamokin, visited the brewery to meet Deppen, a family friend. While they waited for him, they sampled the beer.

“It’s really good,” Randi Feese said. “The atmosphere is nice. I like that they’re selling art.”

The latter put her husband in a jovial mood.

Tyler Budwash said he, his brother and Deppen had been planning to open the brewery since 2017.

“We looked at a few buildings in town,” he said. “This was the first one we looked at.”

Conlan Budwash said they kept the original flooring to try to help preserve the building’s history.

Tyler Budwash said the brewery will be open 4 to 10 p.m. Thursday, 12 to 11 p.m. Friday and Saturday and 12 to 8 p.m. Sunday. He said there will be food trucks on weekends and patrons will be allowed to bring their own food to the brewery.

“We took a walk and stopped in for a beer,” Mike Mennig said. He said the atmosphere also is nice.

“It’s great,” she said. “Businesses are opening to revitalize the area.”

Tyler Budwash said the brewery wants to be a part of that.

“I saw the effort all the other new businesses are putting in,” he said. “This is getting revitalized, and I wanted to be a part of that.”