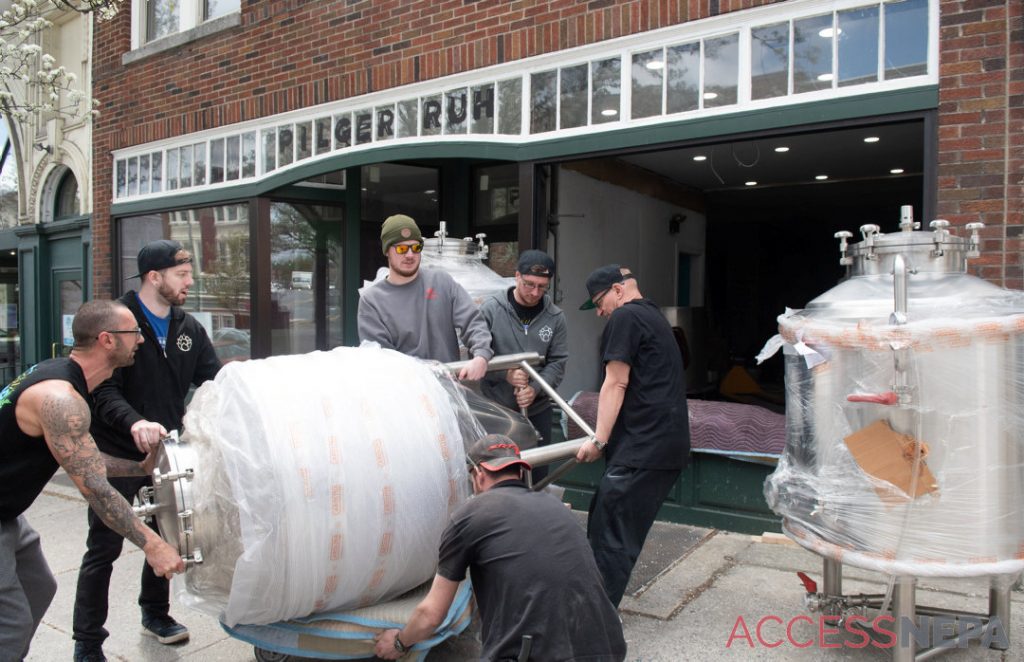 POTTSVILLE — Pilger Ruh Brewing moved closer to opening day with the delivery Thursday of five fermenters to its downtown location.

Conlan Budwash, head brewer, and co-owners Anthony Deppen and Tyler Budwash have been renovating 213 N. Centre St., the former Coney Island building, with the hopes of opening their microbrewery this summer.

On Thursday, they removed the front window to bring in the fermentation tanks.

“Once the equipment is set up and ready to go, we can get going,” Deppen said.

Deppen said they will need four to five weeks to brew, but can start selling once the beer is ready.

Conlan Budwash said the next step in the project will be painting the walls inside and cleaning up the floors.

“We’re keeping the original floors, which have been here since the ’50s,” Conlan Budwash said.

“The building is pretty much done, and we have everything we need,” Deppen said. “We’re just waiting on completion.”

Conlan Budwash said in two or three years, they hope to acquire outdoor space behind the building to create a covered patio for more seating.

“When we start generating revenue, we can start expanding,” Conlan Budwash said.

In addition to beer, they hope to serve small bites and possibly partner with local restaurants or food trucks.

Deppen said they have all worked in the industry and have traveled around the country to different breweries, so they “know what works and what doesn’t.”

“We all share a passion for it,” Deppen said. “Between the three of us, we’ve probably been to 600 breweries.”

Tyler Budwash said with their experience, he thinks their brewery will stand out and bring people into the city.

“I think our beer will speak for itself,” Tyler Budwash said. “We’ll have products that no one else around here serves.”

Along with their products, Conlan Budwash hopes the work they’ve done to the location will attract people.

“A lot of people knew what it was as Coney Island, and they’ll see what it’s like now,” Conlan Budwash said. “We want to keep the original feel to it.”