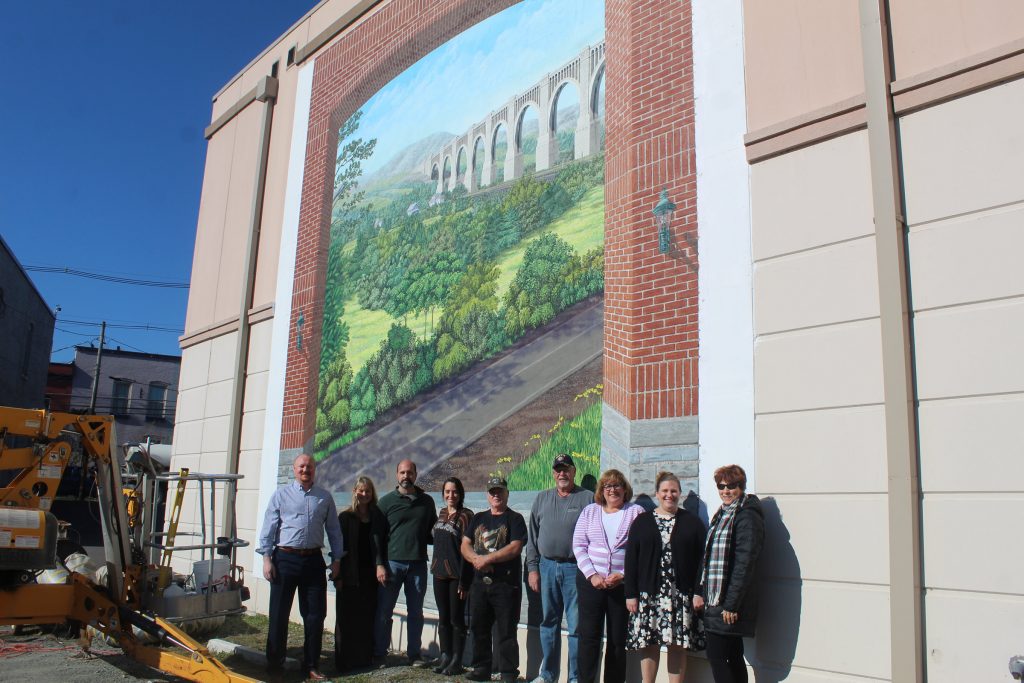 The Dietrich Theater has brought a piece of historic Wyoming County right to the center of Tunkhannock.

A mural installed on the backside of the theater last week displays a realistic rendering of the Nicholson Bridge/Tunkhannock Viaduct in a “trompe l’oeil” style, which creates an optical illusion.

Years ago when the theater underwent an expansion, Penny Davis from the Dietrich Board of Directors suggested brightening up the building with a mural, according to Dietrich Theater Executive Director Erica Rogler.

Local artist Bob Lizza learned of an unconventional method to creating murals that was popularized in California and Philadelphia. Rather than painting directly onto a building, artists like Lizza could create murals from the comfort of their own studio.

The process involves first painting an original design on a smaller scale, then scanning it to use as a guide to grid out the mural on a larger scale. Lizza repainted the design across 35 separate pieces of parachute cloth, which were then adhered to the building.

While Lizza enjoys the convenience and freedom of this process, he said murals created this way also hold up better over time.

On Founders Day in June, he unveiled the original design of the mural, which was inspired by an old postcard from the 1930s.

On Tuesday and Wednesday of last week, he installed the panels onto the backside of the Dietrich. Honors art students from Tunkhannock Area High School also came out for an educational session on Wednesday.

Once Lizza varnishes the mural, the finishing touches can be applied. To enhance the optical illusion, he plans to paint the edges of the mural to blend into the wall. Additionally, he has the idea of applying glow paint to the lighting fixtures in the mural so they could light up at night.

Looking at the mural, Rogler especially appreciates Lizza’s incorporation of Tunkhannock’s architectural details, such as the stone steps of the Wyoming County Historical Society and the brickwork of the Dietrich.

“In fact, those lamps match the lamps on the front of the Dietrich,” she pointed out.

“The Dietrich Theater/Wyoming County Cultural Center has been a good partner with us for quite some time and they always come to us with really great applications and projects,” Chamberlin said.

Looking back to when he had only seen the design on a smaller scale, Chamberlin said it was “incredible” to look at it fully installed.

“People driving through Tunkhannock, whether they’re locals or visitors, are going to be seeing it for many years to come,” he said.

Ruhf commended the Dietrich for taking on projects that help the whole community and said it was a positive experience for the three organizations to work together.

The Nicholson Bridge/Tunkhannock Viaduct is one of the most popular attractions in the area, she noted.

“I think it resonates with the residents of Wyoming County and even in the surrounding counties,” Ruhf said.

Through the EMHR, the Dietrich has secured half of the funding needed to complete the second section of the mural, which will expand the design along the backside of the theater. The Dietrich has also submitted an application for the Room Tax Fund’s 2020 cycle.

After completing the Nicholson Bridge mural, the goal is to add another mural on the side of the building that faces Bridge Street. While the Mural Committee has bounced around ideas for the next mural, Rogler said she wants to keep it a surprise until the theme is definite.

For now, she encourages everyone to stop by the Dietrich and enjoy the view. Rogler acknowledged everyone who had a hand in the project, including Lizza and his daughter Natalie Lizza Rail, who documented the project, as well as the funders, Mural Committee, BX3 Supply and Rental in Tunkhannock and the team who prepped the wall for the mural.

“It’s exceeded our expectations in every way and we just couldn’t be more pleased with the outcome,”

Rogler said. “We invite all folks to come out and see it for themselves.”