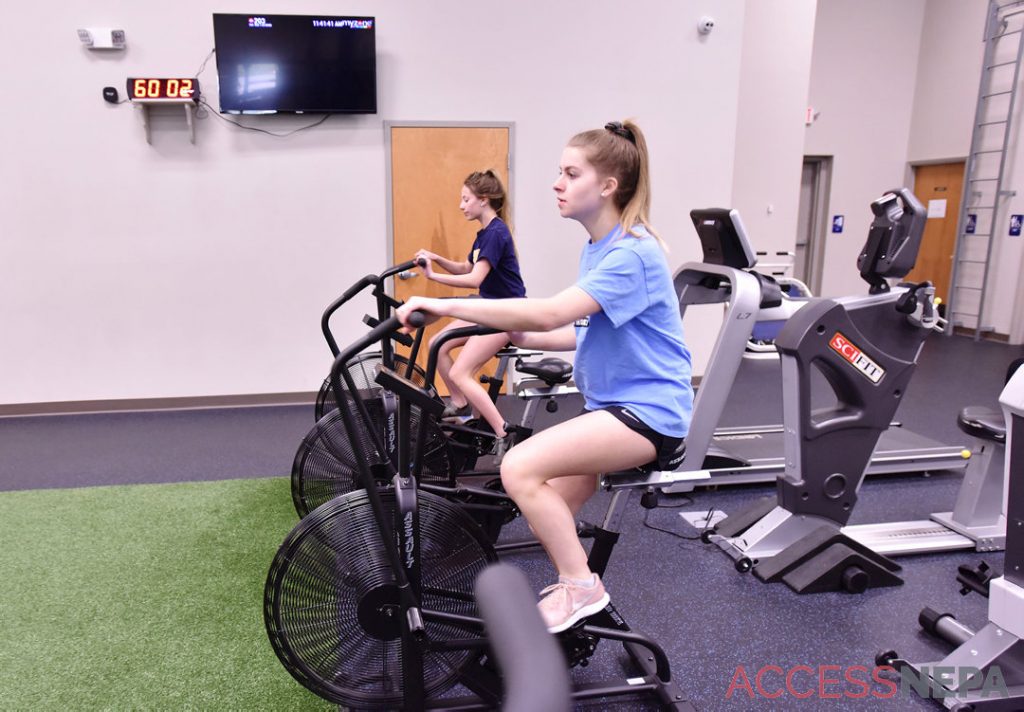 Though sports have been put on hold for weeks, many athletes couldn’t afford to also pause their rehabilitation schedules.

That’s where facilities like Elite Spine and Sports Physical Therapy in Wilkes-Barre are stepping in during the coronavirus pandemic.

With enhanced safety and social distancing measures, Elite is assisting its clients on-site, albeit at a limited basis. Dozens of athletes are hopeful they can return to the field as soon as possible through such help.

“I’m not too sure how behind I’d be, but I know I’d be more behind than I am with Elite,” said Sam Seeherman, a field hockey and girls lacrosse player for Wilkes-Barre Area High School.

That’s the type of message Jack Digwood kept receiving during the early stages of the coronavirus shutdown. Digwood, who owns Elite along with his wife, Kristen, was concerned enough at first that he halted all operations for about a week and a half.

Calls kept coming in from clients concerned about their rehab progress, however, and the Digwoods re-opened Elite to help. The rehab aspect of their business falls within the parameters of a healthcare facility and is considered essential, Digwood said, but the training section has remained closed.

Even inside a 12,000-square-foot facility, plenty of precautions have been taken in the ensuing weeks.

At first, only the Digwoods staffed the building. More employees have come in now that about 90 clients come through the doors each week — far less than the 500 that usually filled the facility months ago.

“We’ve done no marketing to drive our business,” Digwood said. “We’re just seeing people who are calling us.” 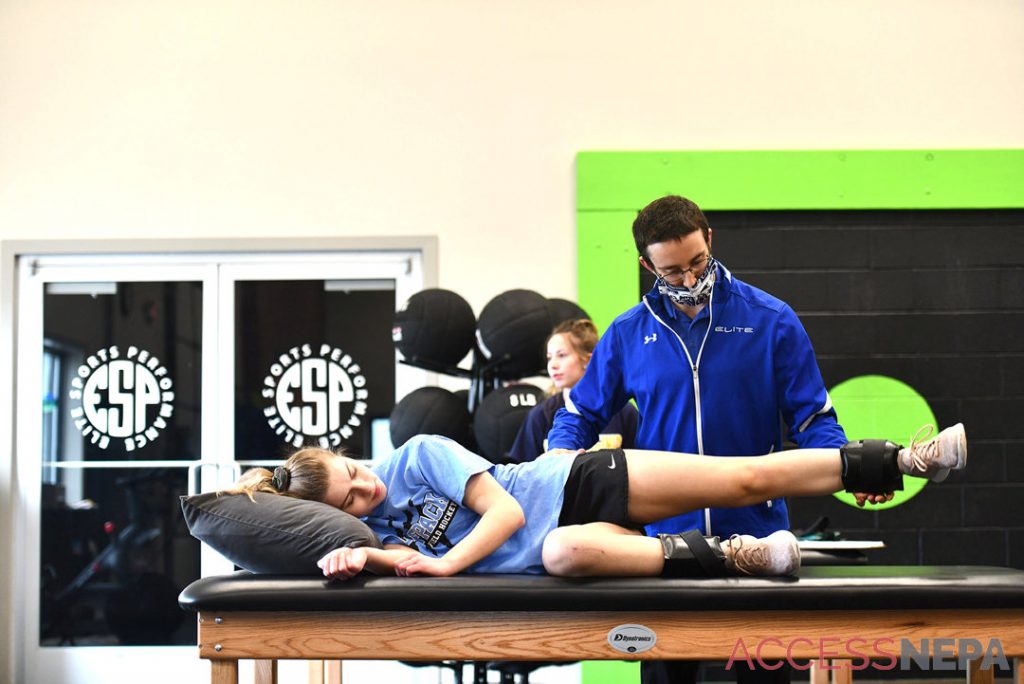 Those who do stop in are seen on a one-on-one basis. If multiple clients are rehabbing in the same hour, they’re kept apart as much as they can be.

Physical therapists wear masks, used equipment is separated from clean equipment between sessions, and anything touched is wiped with disinfectants.

It’s a lot of work to ensure health, but it’s all for the clients who need to come in.

Seeherman tore her anterior cruciate ligament while skiing last winter and was going to miss this spring’s lacrosse season. She said a recovery timeline of six to nine months is typical for her injury, so she needed to stay on top of rehabbing to have a shot at playing for Wolfpack field hockey and her Electric Surge travel team next season.

“It’s really a shame that I might not be able to play as much as I can,” she said. “I just love it so much, and it’s encouraged me to work hard. … I really want to go back.”

“It’s challenging (at Elite), but in a good way,” Seeherman said. “They put it where they know it’s at my level, but I can go further if I want.” 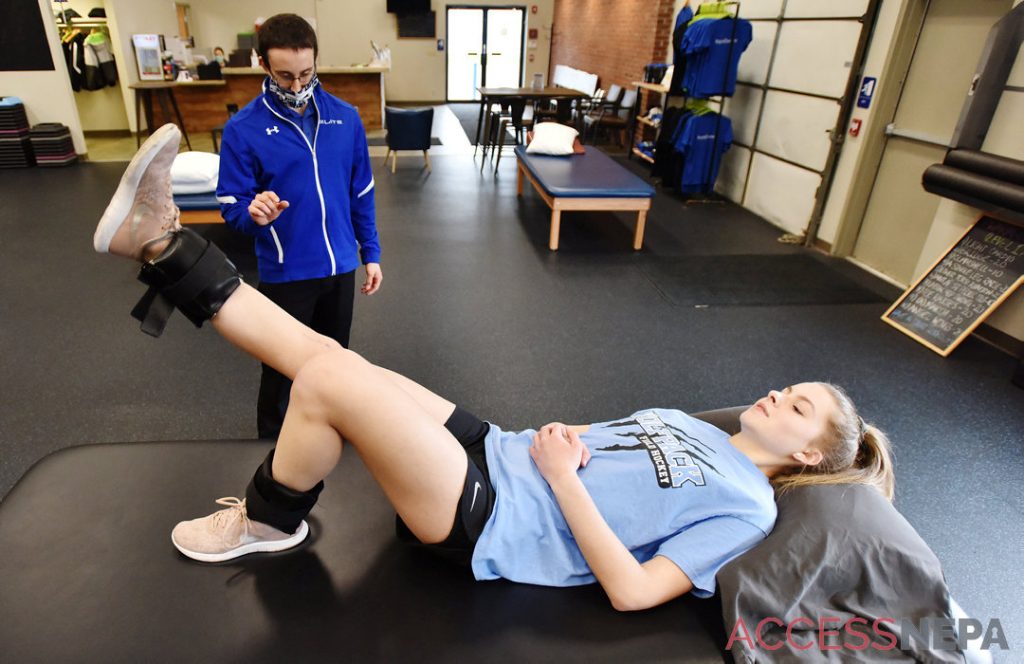 DeMarzo is attending sessions three times per week to look after her knee as she’s piled up mileage over the years. She ran through similar discomfort, but when things flared up again, gave Elite a chance.

The two-time District 2 champion said Digwood has helped open her eyes to how valuable stretching and maintenance is. She’s been focusing on strengthening muscles and still plans to visit Elite after she feels 100 percent.

“I think he’s clearing me for personal therapy (today),” DeMarzo said. “After that, I’m still going to go. Jack’s going to make me a plan for my knees specifically.”

Other clients have found the hands-on work helpful, too. Digwood said he saw a client in person because telehealth didn’t seem to be doing the trick as the man recovered from a shoulder operation.

“It was so helpful to say, ‘This is how it should feel.’… He now understood what I was talking about,” Digwood said. “That you can’t completely convey (via telehealth).”

If rehabbing athletes recover and see future success, the decision to reopen figures to continue to pay off for Digwood.

“It makes me really thankful. It was a real unnerving feeling to shut your doors on everybody and have some people you know could be really helped not have a place to turn,” he said. “I’m grateful, and it’s also been a wonderful stress relief. … It’s made the time go by so much faster for me and my wife.”