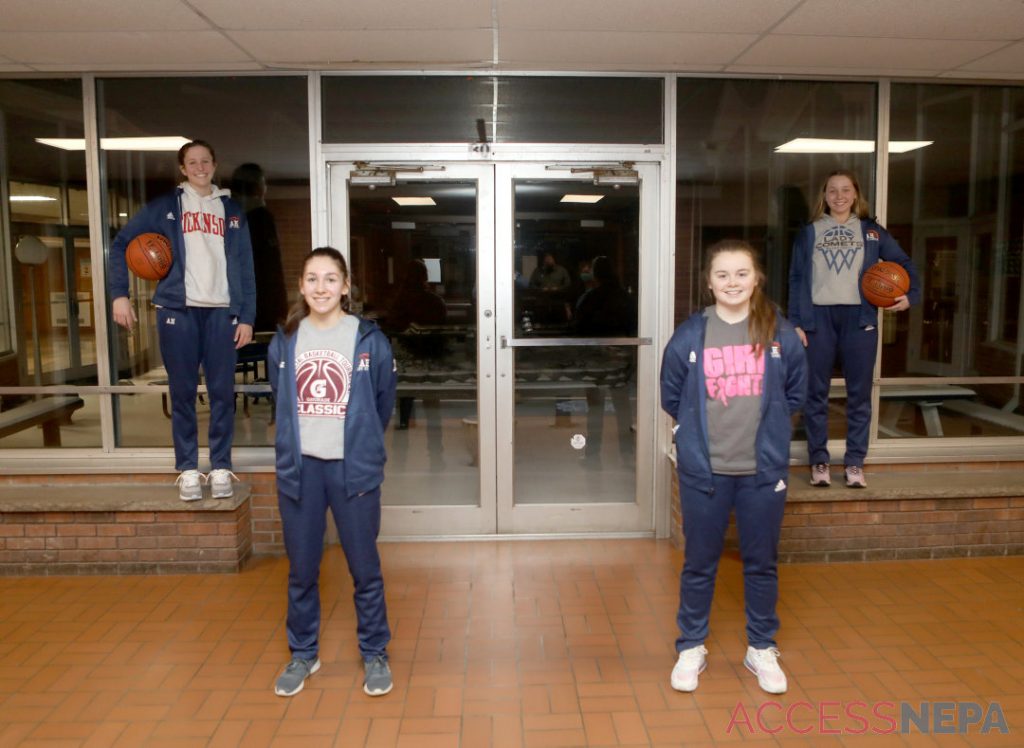 It’s an evening to honor survivors, and those who have not.

Painful memories for many, and hope for those who the Pink Night game has helped beyond measure.

Over 12 years, Abington Heights’ girls basketball team partnered with Scranton Prep, and most recently, North Pocono, to raise more than $222,000 to help local women fighting breast cancer through the Foundation for Cancer Care.

As they prepare to take the court for Monday night’s televised broadcast of their Division I-II crossover game at North Pocono, the teams will once again take time to remember those struggling in their fight, or coping with loss, including another basketball family.

Abington Heights senior Lauren Lombardo lost her mother, Leslie, after a seven-month fight with cancer Dec. 17, just one day after her 18th birthday. Leslie was always at her daughter’s games, encouraging and sometimes prodding Lauren.

“It’s weird because I can hear her kind of correcting me as I’m playing,” Lauren said, “And she would always correct me after every game. So, it’s definitely been something to adjust to.

“My mom, she came to every game. She never missed one no matter how far it was and she would always be there to support me, so every time I go on the court, it’s for her. No matter what.”

Leslie’s death shook the team to the core.

“We all already consider ourselves family, but after that tragedy we all became even closer than we were before,” senior guard Clair Marion said.

“We knew that we had to be there for Lauren and we knew that she needed us, and that brought us all closer together as a team.

“We’re playing for a reason higher than basketball,” senior guard Allison Murray said. “It especially makes it so special because we know that it’s benefiting so many people in our own community. So it definitely gives us more of an incentive.

“We’ve already had a huge commitment to making this a special night and doing the best we can to fundraise, but with so many people in our community being affected, and our team alone being personally affected by cancer and breast cancer more specifically, it definitely makes it very important for us to do the best we can.”

“I think it’s unmatched how tough mentally we are and just to see two people on our team, and before this year Megan Herd also was on the team and she was affected as well, obviously, it wears down but you would never know that if you just looked at them. You have to give a lot of credit to people like that for sure.”

Senior guard Rachel McDonald has become all too familiar with the significance of the fight. Her mother, Kathy, is one of the living faces of metastatic breast cancer, fighting stage 4 for all of Rachel’s playing career.

That includes some especially clutch moments to win previous Pink Night games, all of which pales in importance.

“It stinks, but at the same time we’re given an opportunity to be able to help, and especially those who are affected by it know that this is a big opportunity to help these people that are going through it,” Rachel said. “So it means a lot.

“I’m lucky to still have my mom here and she’s a lot of help, too. She helps a lot with people, people reach out to her when they figure out the news that they have cancer.”

Part of what helps is funneling people to the Foundation for Cancer Care, which provides emotional and financial assistance to families whose world can be ripped apart, as well as providing breast cancer screenings and education. Those lessons generally aren’t part of any curriculum or game planning, but they have been for head coach Deanna Klingman’s six seasons.

“They’re young kids and for them, it’s an eye-opening experience each day. There’s no guarantee that things are going to go the way you want. And you’ve got to take each day and be grateful that you could be on the court, you could be with your families, and you could be safe.”

It’s built not only an unshakable bond, but remarkable resolve.

“It’s unbelievable,” Klingman said. “They come to practice and some of these girls, they’re dealing with a lot. You would never know. And it’s the other girls that help pick them up. They laugh together. We have a good time. They work hard.”

They’ve also learned how much more there is to the game.

“My mom is really lucky enough to be able to get past it. She still does have metastatic breast cancer so she does have to get treatments once a month. But to be able to be here for me and still come to these games, I mean it means a lot.”

It also will for Lombardo.

“I know my mom would have loved to see me play,” Lombardo said. “I know she’ll be watching down on me. Everything, it’s for her.”