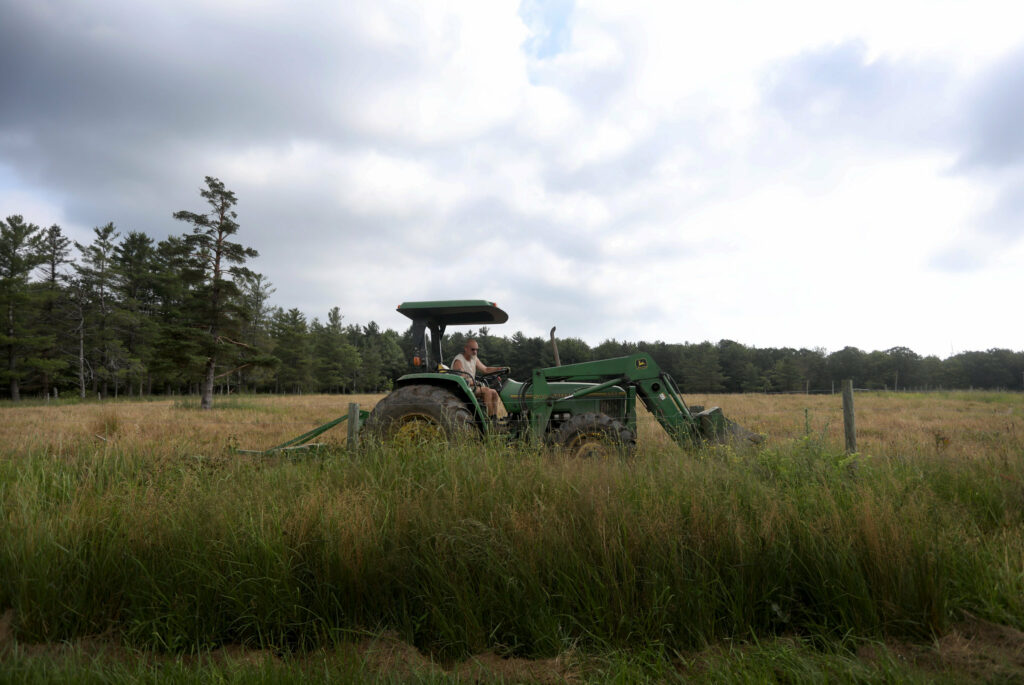 After seven years in the Army and two tours of duty in the Middle East, Mike Johnson returned home with a Purple Heart but missing a sense of purpose.

Enlisting fresh out of high school, the 32-year-old father of two never had the chance to develop hobbies in his early adult life. Friends he made in the Army were either spread out across the country, still serving or no longer alive, he said.

He spent most of his time sitting around all day, never doing anything.

Then he found a year-round camp in Lackawanna and Wayne counties dedicated to helping disabled veterans and first responders.

“Camp Freedom really has helped me develop a hobby again, make friends, be around people who are just like me,” said Johnson, who left the Army in 2013 as a specialist.

other veterans and serves as the camp’s operations manager, maintaining the 1,800 acres of Camp Freedom’s sprawling woods.

Featuring 1½ miles of rivers and two ponds loaded with trout, bass, perch, blue gill, crappie and even some catfish, along with dense forests packed with wildlife from massive deer to turkeys, the veteran-run nonprofit aims to be an outdoor getaway for veterans, first responders, their families and families who have lost a loved one in combat.

Although the camp is only about a mile from the Casey Highway in spots, it’s virtually silent, replacing the sounds of modern society with pastoral solitude.

To get to the camp, visitors navigate a narrow dirt road, cutting through thick forestland and shaded by a dense canopy of leaves overhead. Suddenly, the canopy clears and camp-goers are greeted by a lush, green clearing leading to Camp Freedom’s rustic lodge.

Lined with taxidermy including a large moose head mounted atop a stone fireplace, the wooden lodge matches the camp’s rural nature, and a wall of windows offers a picturesque glimpse of what visitor’s can expect during their stay — seemingly endless forests.

Located in northeast Lackawanna County outside of Carbondale and spilling over into Wayne County, Camp Freedom opened in the fall, said executive director and Army veteran Matt Guedes.

In 2018, 49 disabled veterans visited the camp, and this year, the camp had 95 veterans, 21 first responders and 38 family members as guests, he said.

Lackawanna County had roughly 4,200 active cases with disabled veterans within the past five years, said Dave Eisele, the director of Lackawanna County’s Department of Veterans Affairs. There are about 28,000 veterans in the county, he said.

As of August 2018, 4.7 million veterans, or 25% of all veterans, had a service-connected disability, according to a March Bureau of Labor Statistics report.

“You go up there and spend four or five days and get that camaraderie back,” Eisele said about Camp Freedom.

He only knew of one other camp, in Missouri, that offers similar services as Camp Freedom, but it’s only open during hunting season.

“What we do here is we hike, we bike, we ride ATVs, we rest, we relax. We’re a safe place,” Guedes said. “We hunt, we fish, we go and look at trees and identify trees. … We do anything that can happen on these beautiful 1,800 acres.”

Everyone who comes to Camp Freedom has unique problems, and helping them means listening and evaluating their needs to tailor each experience, he said.

“His objective in buying this property was 100% built on getting access to the disabled,” he said. “That was the motivator.”

Beginning in 2017, Guedes and Bachenberg started developing their plan for Camp Freedom, and although veterans and first responders are their focal point, they want it to be all-inclusive, Guedes said.

During a breakfast meeting in June, Guedes lauded Johnson’s work ethic at the camp.

They met at a luncheon, and Johnson started volunteering at Camp Freedom. He started once a week but ended up going three times a week and sometimes every day, Guedes said. Now, Johnson works there.

Isolation often leads to issues like drug or alcohol use, he said.

Having purpose saves lives, he said.

Twenty-two veterans commit suicide every day, Guedes said, citing a 2016 statistic that he believes is actually much higher. Guedes said he talked with many of the veterans who used Camp Freedom’s services, and every one had contemplated suicide.

“We do not have the capability or capacity to help everyone, but everyone who comes we can help,” he said. 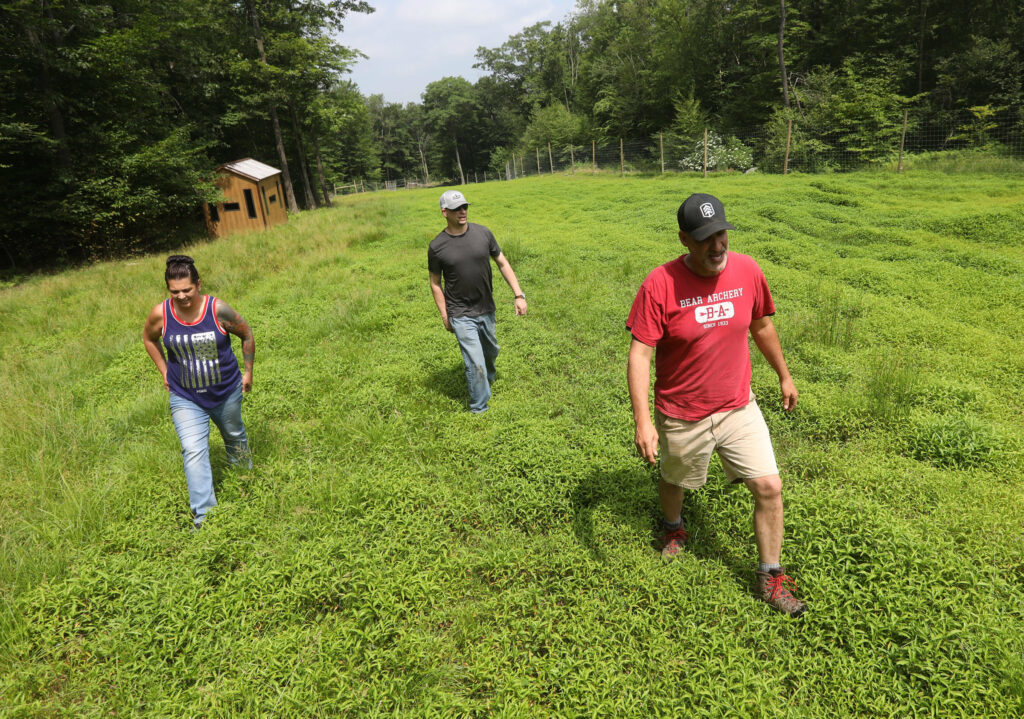 ‘Environment I was looking for’

Camp Freedom only accepted applications from veterans during the fall, but beginning in January, the facility started accepting police, firefighters, emergency medical services professionals and other first responders.

Guedes said he believes there is a rising number of suicides among first responders.

“When you live in harm’s way for long periods of time and you see the horrific things that these people see over and over again … you cannot forget that,” he said.

As many as 37% of firefighters and EMS professionals have contemplated suicide — 10 times the rate of American adults, according to a May 2018 United States Department of Health and Human Services report on first responders. The report also notes that 6.6% of fire and emergency service professionals have reported attempting suicide, compared to 0.5% of civilians.

Trooper Alex T. Douglass, who was critically wounded in a 2014 sniper attack at the Blooming Grove state police barracks in Pike County and eventually had part of his leg amputated as a result, is among the first responders who benefitted from Camp Freedom.

“They got me back into the environment that I was looking for, that I thought once I was wounded that I was never going to be able to do again,” he said, recalling going fishing with Johnson by using one of the camp’s all-terrain motorized wheelchairs.

Johnson hunted and fished a bit as a kid, but it wasn’t until he found other people to do it with at Camp Freedom that he realized how much he enjoys the outdoor activities.

“I found those hobbies again and started doing the things that I like to do, which at the end of the day, that’s the kind of stuff that helps you when you’re having a bad day,” he said.

Camp Freedom is an escape, Johnson said. Unless the wind blows just right, he can’t even hear cars on the property. It also gives him a chance to bond with other combat veterans and discuss their struggles.

“I don’t think it really gives you a way to get over the things that have happened in your life,” he said. “What it kind of does is give you a way to remember that there’s more than that experience.” 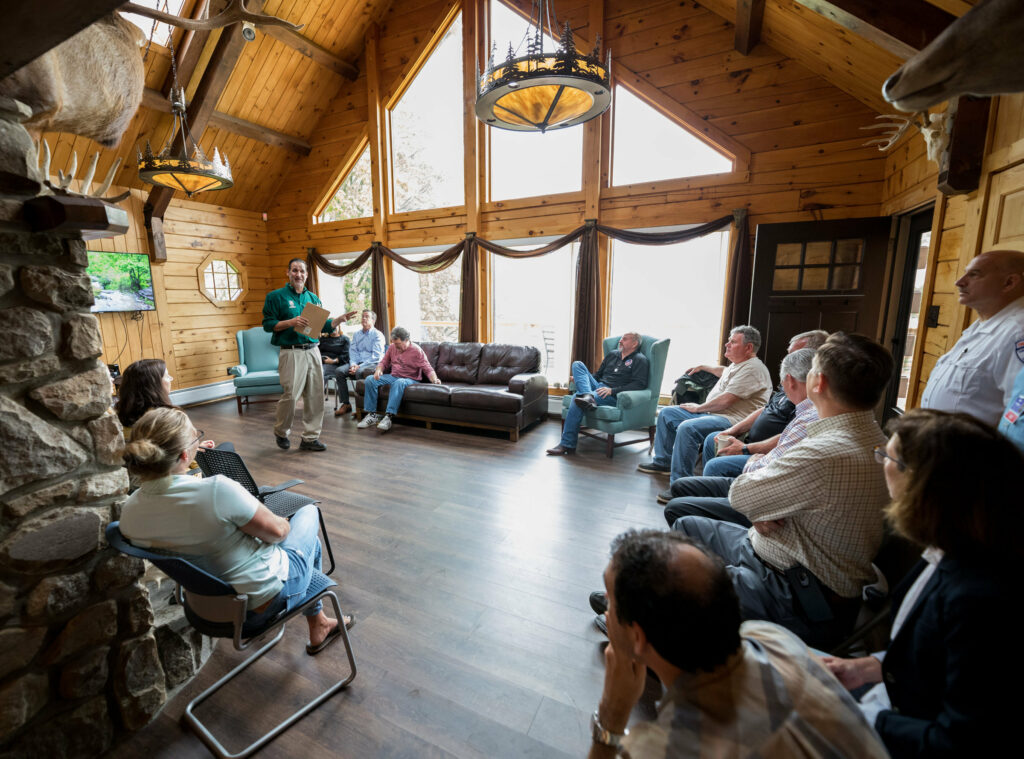 Besides Camp Freedom, there are other organizations to help service members and veterans, including:

How to apply or help