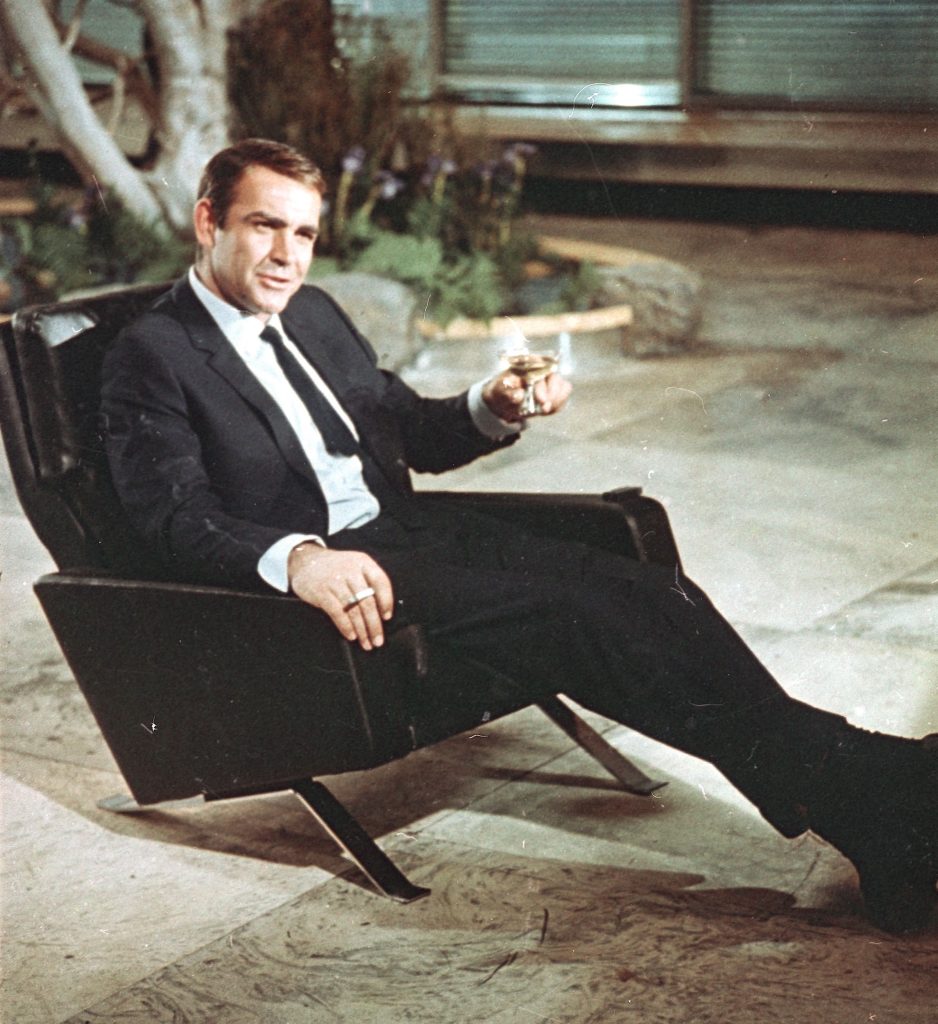 Spy shows dominated because of Bond

I just learned a piece of trivia that shocked me.

I was doing some research when I discovered actress Louise Troy, who appeared in “Hogan’s Heroes” three times — as a countess who escaped in a plane, was “Axis Annie” Gebhardt, and was the daughter of a general who gave Hogan some info on guerilla warfare — was married to Werner Klemperer, Klink, during Hogan’s production.

The trivia questions from last time:

What three television series had their stars sing the theme song?

ANSWER: “Green Acres” is sung by Eddie Albert, with a little help from Eva Gabor, and, believe it or not, Chuck Norris sang the theme song to “Walker Texas Ranger.” And he theme from “The Fall Guy” was also sung by its star, Lee Majors.

QUESTION: We know there was crossover between “Petticoat Junction” and Green Acres” because they were both based in fictional Hooterville. But was there any crossover of actors between the two Hooterville shows and “The Beverly Hillbillies”?ANSWER: Yes. Actress Bea Benaderet played the Clampett’s cousin — and Jethro’s mother — Pearl Bodine.

QUESTION: Can you name the three key cast members from the “Nine to Five” movie in 1980 who also appeared in “The Beverly Hillbillies” movie in 1992?

ANSWER: Two of the three secretaries who took their boss hostage because of the fear he would turn them into the police for accidentally trying to kill him with rat poison they thought was coffee sweet=ener, “Laugh-In” vet Lily Tomlin, and country singer Dolly Parton, and their boss Dabney Coleman, all appeared in the “Hillbillies” movie. Coleman and Tomlin were Milburn Drysdale and his secretary, Jane Hathaway, respectively, and Dolly appeared as herself, singing at Jed’s wedding.

Anyone for spy shows?

In the 1960s, the popularity of the James Bond character in the movies caused network TV to try to emulate it. So a number of shows, some successful some not, popped up.

That’s where the Spy Show Genre came from.

They were led by “I Spy,” which has an interesting story to it.

Sheldon Leonard, the gangster-like-looking character who showed up in guest star roles on a lot of TV shows back then, was actually an accomplished producer.

You may remember him as Nick the bartender in It’s a Wonderful Life who doesn’t recognize Jimmy Stewart and throws him out of the bar.

Two characters on the CBS sitcom “The Big Bang Theory” are named in honor of him — Sheldon Cooper and Leonard Hofstadter.

Leonard became one of the most successful TV producer/directors of the ’50s and ’60s. He produced four sitcoms on CBS –“The Danny Thomas Show,” “Gomer Pyle: USMC,” “The Dick Van Dyke Show” — which won 21 Emmy Awards — and “The Andy Griffith Show.”

Wanting to delve into drama — just in time for the spy craze — Leonard thought about how spies could move around the world without being noticed. He came up with the idea professional tennis players would work. So he made one agent a player, and the other agent his coach.

So he teamed up Robert Culp — who would later star in The Greatest American Hero in a similar role — with a young, stand-up comedian named Bill Cosby — over the initial objections of the NBC network. So “I Spy” became the first series to have an African-American in an equal, co-starring dramatic role with a white actor. Leonard is also regarded as having invented the television spin-off.

U.N.C.L.E. stood for United Network Command for Law and Enforcement.

The two spies were Napoleon Solo, played by Robert Vaughn, and Illya Kuryakin, played by David McCallum, who has to have set the record of the longest time between TV series. “Man” was on NBC from 1964-68, and McCallum played Dr. Donald “Duckie” Mallard on the hit CBS series, NCIS beginning in 2003. That’s 35 years.

The two secret agents were supervised by Alexander Waverly, played by Leo G. Carroll, after he starred in a similar series previously, “Topper.”

“The Girl from U.N.C.L.E.” was very interesting. The stars were a 24-year-old Stefanie Powers, who was beautiful in her early 40s when she played in “Hart to Hart” in the ’80s with Robert Wagner. You can imagine what she was like when she was younger. She also starred as the legendary John Wayne’s daughter in “McLintock!” in 1963.

Her co-star was actor Noel Harrison, whose main claim to fame before this was that he was the son of legendary actor Rex Harrison. I saw Noel only one other time, playing a drugged-out rock star in an episode of “The Mod Squad.”

The CBS entry was the wildly popular “Mission: Impossible.” A team of specialists called The Impossible Mission Force would accept assignments to infiltrate a foreign government or perhaps a crooked business run by the mob, and right the wrong.

The cast changed a little during its 1966-73 run. Barney Collins, played by actor Gregory Morris, was the electrical specialist who was in charge of things like wiretaps and bugging, or perhaps blowing up a safe. Willy, played by Peter Lupus was a bodybuilder who would do whatever physical work was needed.

The husband and wife team of Barbara Bain and Martin Landau played, respectively, the female of the force, Cinnamon Carter, and Rollin Hand, the master of disguise. When they left in 1969, they were replaced by Leonard Nimoy, fresh off his run as Mr. Spock in the original “Star Trek” and 24 year-old beauty Lesley Ann Warren. After just one season, she was replaced by the beautiful redhead Lynda Day George.

“Mission: Impossible” was not only revived in a new series with Graves and Morris — and Morris’ son, Phil, playing Collier’s son, Grant Collier — from 1988-90, but also in six movies starring Tom Cruise. There are two more movies in the planning stages for 2021 and 2022.

ABC’s answer was, I believe, the first British TV series broadcast on American TV, “The Avengers.” Actor Patrick Macnee as John Steed, and a young and beautiful Diana Rigg as Mrs. Emma Peel, were the leads. Together, with trademark British aplomb and aloofness they would solve crimes, as Steed referred to his partner as “Mrs. Peel.”

In the next series, the couple was actually spoofed.

Since NBC kinda cornered the market on these series, it’s no surprise they would also come up with the spoof of the spy genre — “Get Smart.”

I once made up a list of the ten funniest recurring phrases on TV in the ’60s, and I think Agent 86, Maxwell Smart, had four of them:

“Sorry about that, Chief!”

“Missed me by that much”

“I asked you not to tell me that.”

The fourth one. I think, was the funniest. The Chief would say, “Max, you were in danger the whole time, with KAOS agents all around, you.”

And Max would reply, “And loving it.”

The very name Agent 86 is humorous — 86 means throwing something away.

Some of the characters were a riot, like Larabee, who was even more bumbling than Max, played by actor Robert Carvelas; Hymie, the robot produced by the evil KAOS who was converted to CONTROL, played adeptly by actor Dick Gautier, who would later portray Robin Hood in Mel Brooks’ version of the fairy tale, the short-lived sitcom “When Things Were Rotten,” and my favorite, Siegfried, th KAOS agent, played so well by Bernie Kopell, Doc from the “The Love Boat.” The accent Kopell developed for the character was so strange I don’t think anybody could impersonate it. I also saw Bernie play an irritable Army colonel in an episode of McHale’s Navy. Oh, yes, Kopell was also Alan-A-Dale in “When Things Were Rotten.”

Aside from the characters, “Get Smart” was full of sight gags. Even gunshots were treated that way. Some may think it is too violent today, but back then, we were laughing so hard we had no time to be offended.

QUESTION: What was Willy’s last name on “Mission: Impossible”?

QUESTION: Was Peter Graves the only leader of “Mission: Impossible”? Is Graves his real name?

QUESTION: Were any actors who starred in the TV “Get Smart” in the 2008 movie starring Steve Correll and Anne Hathaway?