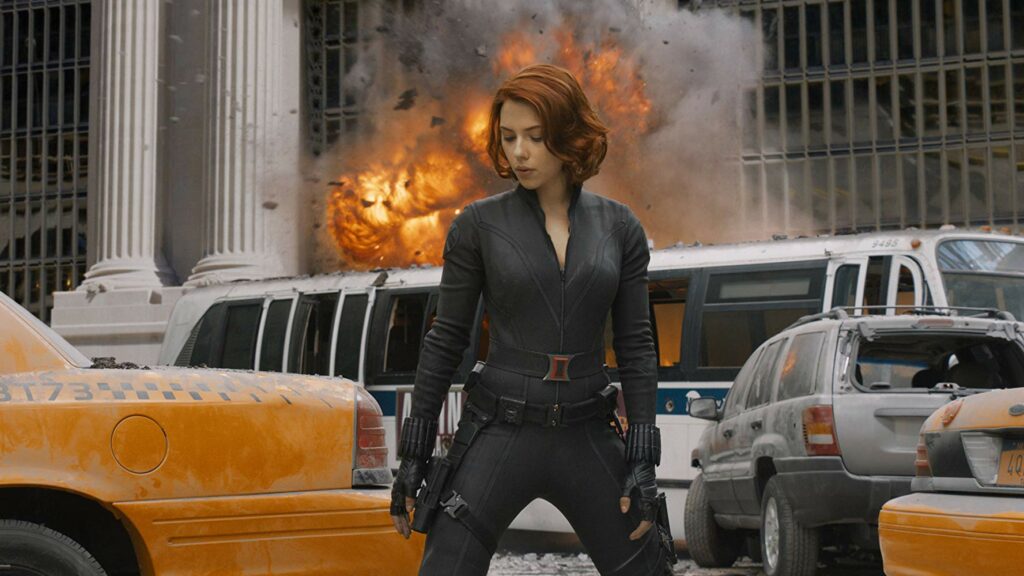 The evolution of Black Widow

As “Avengers: Endgame” wraps up 11 years of storytelling over 22 movies in the Marvel Cinematic Universe, Black Widow/Natasha Romanoff (Scarlett Johansson) – one of the six original Avengers – has emerged as one of the most enduring characters in the franchise.

The red-haired Russian assassin turned SHIELD super-spy first stepped onto the scene in 2010’s “Iron Man 2.” As the MCU’s first female superhero, Black Widow carried the mantle for years, paving the way for others like Scarlet Witch (Elizabeth Olsen), Wasp (Evangeline Lily), Valkyrie (Tessa Thompson) and Captain Marvel (Brie Larson). Intelligent, strong and always in control, Black Widow set the bar for female superheroes in and outside the MCU.

Black Widow wasn’t the first female superhero in the Marvel Cinematic Universe to headline her own solo movie – that went to “Captain Marvel” earlier this year. But whatever the character’s fate may be in “Avengers: Endgame,” Black Widow is set to finally get her own film. The standalone, speculated to be a prequel about Natasha’s spy training, could go into production as early as this summer.

Throughout her six appearances in the MCU so far, Black Widow has grown tremendously as a character. Let’s look back at how the character has evolved over time.

When moviegoers first met Natasha, she was a “sexy secretary with a skill set on the side,” according to Johansson. Indeed, the film initially focuses more on Black Widow’s looks than her spy skills. Pepper Potts (Gwyneth Paltrow) hires Natasha to be Tony Stark/Iron Man’s (Robert Downey Jr.’s) assistant. The genius/billionaire/playboy/philanthropist openly ogles his attractive employee, which makes for some cringe-worthy scenes.

It’s only when SHIELD Director Nick Fury (Samuel L. Jackson) appears that Tony learns Natasha is more than a pretty face. One of the highlights in the often-criticized sequel is Black Widow’s stunning action sequence in the Hammer Industries building. Wearing her now-familiar black catsuit, the spy somersaults, kicks and fights her way through a group of security guards. Black Widow, welcome to the MCU!

From the moment Black Widow comes onscreen in the epic 2012 teamup, the character shows she’s in control of any situation. Though she may be tied down to a chair during her opening interrogation scene, Natasha makes it clear that she’s the one doing the interrogating.

But the film also reveals the internal struggle driving Black Widow. Throughout “Avengers,” Natasha is working to make up for the bad things she’s done in her past. “I’ve got red in my ledger – I’d like to wipe it out,” she says. First, she saves a mind-controlled Clint Barton/Hawkeye (Jeremy Renner) from the grasp of villainous trickster Loki (Tom Hiddleston), paying back the SHIELD archer who once spared her life. Then she tricks Loki into revealing that unleashing Bruce Banner’s Hulk (Mark Ruffalo) is the linchpin of his plan. And during the Battle of New York, Black Widow uses Loki’s scepter to close the portal he opened to allow the Chitauri aliens to invade the city.

Every Avenger has their role to play in the film. With her smarts and stealth, Black Widow secured her spot as a vital member of the team – and got some red out of her ledger.

The 2014 political thriller brings together two of the most unlikely Avengers – the idealistic Steve Rogers/Captain America (Chris Evans) and the morally gray Black Widow. In the process, the film gives us one of the best friendships in the MCU as the two learn to trust each other.

The revelation that Hydra infiltrated SHIELD for decades rocks Natasha. In her quest for redemption, Natasha realizes she traded in her blood-stained KGB past not for an honorable agency like SHIELD, but for another corrupt organization. It’s a valuable insight into the motivation of the hardened warrior we’ve come to root for. And it’s a blow that Cap – with his eyes now open to the compromised government he once pledged to serve – can understand.

As the two bond to take down Hydra, Black Widow and Cap form a partnership that stretches into future MCU films, up to and including last year’s “Avengers: Infinity War.”

The 2015 superhero teamup delves into Natasha’s past and psyche more than any of her MCU appearances. As the superhero attempts a romance with Bruce Banner/Hulk, Black Widow is haunted by flashbacks of her super-spy training, brought on by Scarlet Witch.

During the flashbacks, Natasha relives the “Red Room” training and its “graduation ceremony.” This is a sterilization procedure that all female recruits must go through, in order to “make everything easier, including killing,” she explains. In order to complete her training, Natasha was forced to have the procedure, depriving her of the choice of motherhood. During her moving soliloquy to Bruce at Hawkeye’s farm, Natasha mourns losing this choice to decide her future. The bold storytelling allows Natasha to be vulnerable without taking away an ounce of her strength.

After the massive devastation from the Sokovia incident in “Avengers: Age of Ultron,” the Sokovia accords are proposed to keep Earth’s mightiest heroes in check. As the heroes take sides over the accords in the 2016 film, Black Widow finds herself in the middle of Iron Man, who supports government supervision over the superheroes, and her good friend Captain America, who believes the heroes’ judgment is more trustworthy than the government’s.

At first, Natasha joins Iron Man’s side. “If we have one hand on the wheel, we can still steer,” she says. But throughout the film, she looks out for Cap, warning him not to go after his childhood friend, unstable assassin the Winter Soldier (Sebastian Stan). As the divided superheroes face off in an iconic airport battle, Black Widow chooses loyalty and friendship over the accords as she helps Cap and the Winter Soldier escape. The last we see of Natasha is the super-spy going into exile.

As the Mad Titan Thanos (Josh Brolin) works to collect all of the Infinity Stones to wipe out half of the universe, Black Widow is called back into action. The fearless spy, now sporting blond hair after being in exile, returns with Captain America and Falcon (Anthony Mackie) – the same team setup established in “Captain America: The Winter Soldier” – to assist Vision (Paul Bettany) and Scarlet Witch during an attack from Thanos’ minions.

Black Widow doesn’t see much character development in “Infinity War” as the superheroes are preoccupied with saving the universe from Thanos’ snap, which does not go as planned. But as one of the surviving Avengers, Black Widow is determined to undo the damage from the Decimation. She will play a key role with her fellow OG Avengers – Cap, Iron Man, Thor (Chris Hemsworth), Hawkeye/Ronin and the Hulk – to restore their fallen comrades in “Avengers: Endgame,” ready to accept whatever fate befalls her.

We’ll learn what happens to Black Widow and her character arc as “Avengers: Endgame” storms theaters this weekend.