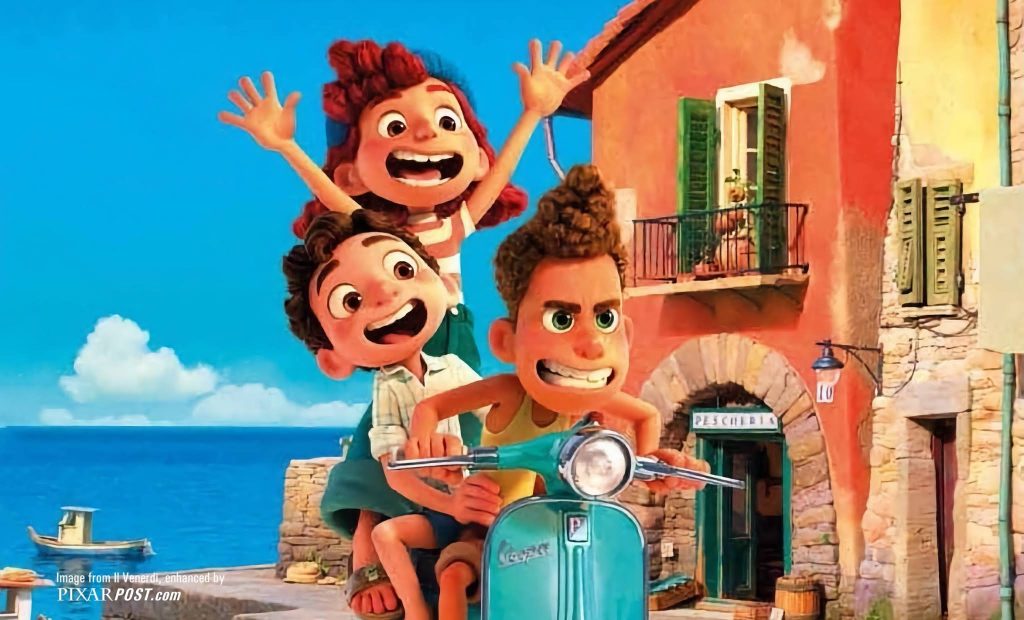 However, don’t go into “Luca” expecting another introspective film like last winter’s “Soul.” With its heartfelt but simplistic story, Pixar’s latest effort lacks the depth and emotion of the studio’s other entries. “Luca” is a serviceable Pixar film that doesn’t reach the heights of a “Toy Story,” “Inside Out” or “Soul,” but fares better than the so-so “The Good Dinosaur.”

The coming-of-age story follows its namesake character Luca (voiced by Jacob Tremblay), a young sea monster who lives off the coast of the Italian Riviera with his parents, Daniela (Maya Rudolph) and Lorenzo (Jim Gaffigan). Growing bored with his life under the sea, Luca disobeys his parents and goes to the surface, where he transforms into a human appearance on land.

Luca strikes up a friendship with fellow sea monster Alberto (Jack Dylan Grazer), and they spend the summer exploring the Italian city of Portorosso. When they hear about the annual Portorosso Cup Triathlon, the friends decide to enter so they can use the prize money to remain on land. The two join forces with determined competitor Giulia (Emma Berman) in the hopes of beating Ercole Visconti (Saverio Raimondo), the Cup’s defending winner and town bully. But Luca and Alberto must hide their identities from a city that reviles sea monsters while keeping a suspicious Ercole at bay.

With its stunning animation, “Luca” whisks viewers away to the spectacular colors of the Italian coastline. Bathed in bright hues, the film bounces back and forth between its aquatic and land settings. The underwater sequences feature stunning shades of green and blue, while the streets of Portorosso favor vivid browns, yellows and the fiery red of Giulia’s hair.

The disarming film mines a lot of comedy from Luca’s and Alberto’s transformation from sea monster to human, and vice versa. Something as simple as a flick of water or a sudden rain shower can cause them to sprout scales or a tail, drawing laughs. The seamless transitions between the boys’ forms are a credit to the team of animators.

At an hour and 35 minutes, “Luca” is one of Pixar’s shorter films, but the cartoon feels like it doesn’t have enough material to stretch out its runtime. The film starts off slow before taking on a wandering, almost aimless approach as Luca and Alberto explore the surface. The boys’ traipsing around the coast reminded me of 2017’s drama “Call Me By Your Name,” another story of self-discovery set in Italy. But “Luca” is much more kid-friendly, favoring younger children with its straightforward plot and light themes.

After a shaky two acts, “Luca” finds its footing in its final act. The Portorosso Cup Triathlon, which consists of swimming, eating pasta (seriously!) and cycling, is beautifully animated and emotionally rewarding. This is where the film sticks the landing, bringing home its message of acceptance – both of yourself and others. “Luca” assures kids that it’s OK to be different. The film makes it clear that not everyone will like you for who you are, but that’s OK, too.

Though “Luca” delivers positive messages for children, it falls short on the big tear-inducing moments that Pixar is known for. The story is still heartwarming, but it’s more of a tug on your heartstrings instead of a pull. You may not need a tissue for this one.

The child stars of “Luca” deserve applause. As Luca, Tremblay taps into the character’s innocence and naivete, then confidence as the sea monster comes into his own. Grazer balances Alberto’s arrogance with a vulnerability that stems from the loner’s past. The two share a nice camaraderie as their characters bond and then clash. Berman adds to the friendship dynamic as the feisty Giulia, who wants to win the Cup while growing closer to Luca, causing Alberto to become jealous.

Despite a notable voice cast, the adults in “Luca” are not as well-developed as the kids. Marco Barricelli shines as Giulia’s dad Massimo, a sea monster hunter who comes to care for Luca and Alberto. But Rudolph and Gaffigan have little to do as Luca’s parents. The film misses an opportunity to maximize their talents when the couple arrives on the surface to search for their son. As Ercole, Raimondo’s villain is entirely one-note and cringeworthy.

If you’re expecting “Luca” to be on the same level as Pixar’s top tier of films, you may have to readjust your expectations. The adorable cartoon meets Pixar’s high animation standard, but its simple story doesn’t swim to the emotional depths of its masterpieces. Just average, “Luca” offers enough for children and parents to enjoy, but little about it will linger after the credits roll. 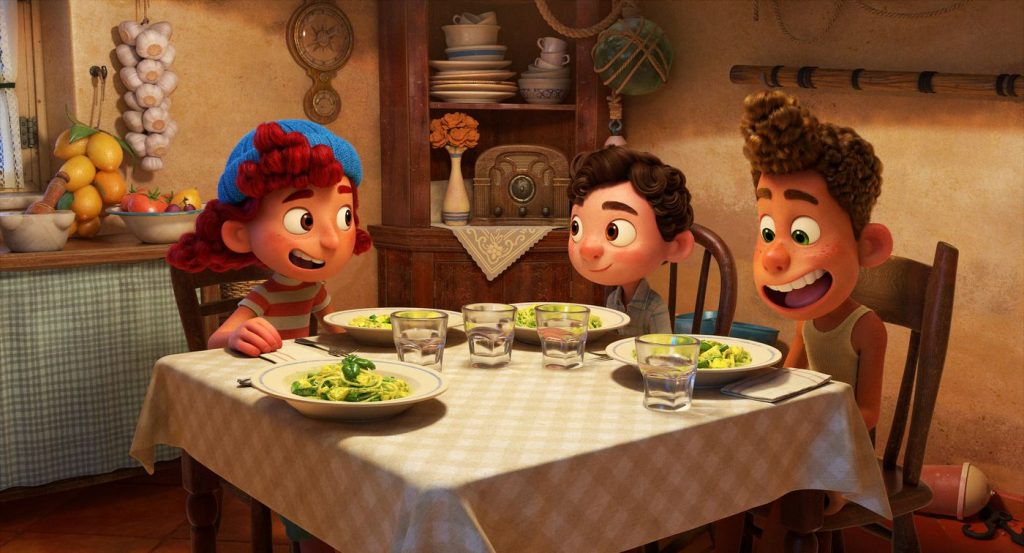 Because of its distinguished track record, Pixar brings a certain level of gravitas to its films. The studio makes animated kids movies, but for the most part they delve into adult themes so the whole family can watch and enjoy. While “Luca” brings the gorgeous animation and strong voice work, it lacks the usual substance associated with Pixar.

After watching the trailer, I was most excited to see the eye-popping animation and it didn’t disappoint. The beautiful transformations from the sea creatures to human characters proved the most engaging part of the film. I like when a film can make the audience feel the world and its pieces through the animation with attention to detail and texture. “Luca” does that and creates a world of wonder kids can enjoy. I also appreciated some of the character designs, especially Massimo Marcovaldo (voiced by Marco Barricelli). It was a simple design, but worked perfectly for the character and his personality.

The voice work is also excellent, led by Jacob Tremblay (Luca Paguro), Jack Dylan Grazer (Alberto Scorfano) and Emma Berman (Giulia Marcovaldo). Tremblay continues to thrive in Hollywood. He should have an Oscar nomination for his role in 2015’s “Room” and showed his range in 2019’s raunchy comedy “Good Boys.” He’s once again excellent, this time as the lead voice actor. Also, he’s only 14.

Tremblay creates a quick and believable chemistry with Grazer, another strong young actor who is most known for his roles in the “It” franchise and “Shazam!” In the film, their characters become fast friends, and I bought their relationship because of the actors. Berman fits right in when the duo meets her character later in the film. There are some other notable actors involved in the voice work, including Maya Rudolph (Daniela Paguro), Jim Gaffigan (Lorenzo Paguro) and Sacha Baron Cohen (Uncle Ugo), but the three younger actors power the film.

The movie’s biggest flaw is it seems like it’s in a hurry. The runtime is 1 hour, 41 minutes, but the credits start to roll before the film hits the hour and a half mark. It never took the time to develop any themes or substance that were more so hinted at instead of explored. The creatures are literally fish out of water. The film could have gone in numerous directions with that, like the idea of acceptance or being who you are meant to be without allowing anything to hold you back. It’s not like these ideas haven’t been explored before, but the film didn’t do much with anything it established. All the conflict didn’t last very long. What seemed like obstacles quickly turned into inconveniences. Again, maybe the expectations placed on a Pixar movie aren’t fair, but in the end this is a run-of-the-mill kids movie.

“Luca” proves a well-animated and acted film, but lacks the substance to make it great. It’s a quick and adorable watch that kids will enjoy and parents can definitely tolerate. However, it doesn’t meet the standard of a Pixar film or produce an emotional impact that sticks with the audience.