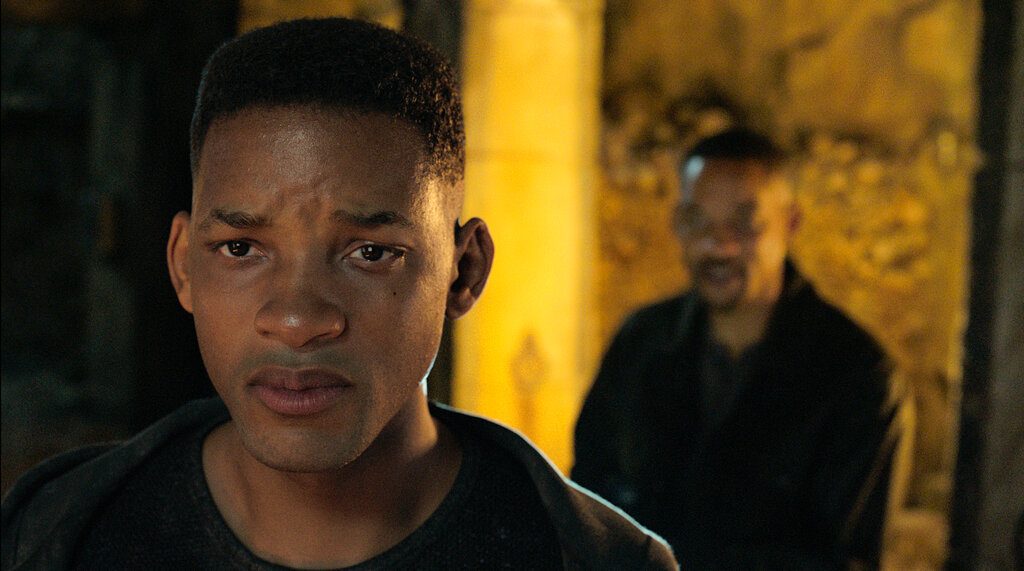 The present and future collide in “Gemini Man,” not only in its intriguing premise, but in the technology used to make it. The sci-fi actioner presents a fascinating concept: a middle-aged Will Smith facing off against a younger clone of himself.

Advancements in de-aging technology have come a long way, making the time appear right for the film. Add in visionary director Ang Lee, who saw an opportunity to push the envelope and shoot “Gemini Man” in a high frame rate, and the thriller seemed poised to succeed.

The contrast between Smith’s grizzled veteran and his fresh-faced self is stunning at times, and the film springs to life during its vivid action. But despite the groundbreaking filmmaking behind it, the otherwise bland “Gemini Man” never reaches its full potential. The film is dragged down by a generic story, uneven script and the weight of its own expectations.

A true movie star, Smith wields such box-office might that he can command a film almost entirely by himself, which he did in 2007’s “I Am Legend.” But instead of one Will, “Gemini Man” serves up two versions of the actor.

The flesh-and-blood Smith plays Henry Brogan, an aging, world-weary assassin who’s on the run from the government he once worked for. But a familiar face has orders to kill him. Coming after Henry is Junior, a clone of Henry played by a digital version of Smith. The 23-year-old Junior has all the qualities of the original Henry that make him a perfect hitman. Confronted with his younger self, Henry must decide if he can save both himself and his clone from a self-serving government agency head (Clive Owen) – and a life of regrets.

“Gemini Man” accomplishes a technological marvel by featuring an entirely CGI character. Junior is based off a motion-capture performance by Smith and created digitally, going beyond the de-aging techniques seen recently in Marvel Cinematic Universe films and Star Wars’ “Rogue One.”

The painstaking technology looks good in scenes where Junior is far away or at night. But close-up, the CGI looks jarring as it still has some kinks to work out. Junior’s protruding lips are distracting on the big screen, and his ability to convey emotions is limited. As Henry and Junior, Smith’s understated performance doesn’t help. Though likable in both roles, the established actor lacks his usual energy, which hurts the audience’s investment in the characters.

The action in “Gemini Man” is outstanding, thanks to its chance-taking director. Lee, the Oscar-winning director of “Brokeback Mountain” and “Life of Pi,” shot the film in 120 frames-per-second 4K 3-D, a technique he first tried in 2016’s experimental “Billy Lynn’s Long Halftime Walk.” Though few theaters in the U.S. can accommodate the fast frame rate, “Gemini Man” looks sharp and bright in 3-D. The action is crisp and clear, and the camera’s fast panning enhances the thrilling sequences. There’s an exciting motorcycle chase through the streets of Colombia, a one-on-one fight in the dark catacombs of Budapest, and eye-popping explosions and shootouts in the climactic standoff. However, the set pieces themselves are very short.

Unfortunately, Lee doesn’t maintain the intensity of the action throughout the rest of the film. With its first two acts bordering on dull, “Gemini Man” follows the standard outline of a story of a man being hunted by his own government. Though it offers the fresh angle of a man being hunted by his own clone, the film doesn’t delve into the weighty issue as much as it could. The story lacks depth, opting for a surface-level reading of its own scientific dilemma. This is a missed opportunity for the film as cloning – and the ethical problems it presents – continues to advance in the real world.

The film suffers from clunky dialogue. When Henry is on the run, he’s accompanied by Danny (Mary Elizabeth Winstead), an inexperienced government agent, and Baron (Benedict Wong), an old friend from the field. Though Smith shares an easy camaraderie with Winstead and Wong, both actors are used mainly to convey exposition. Winstead is forced to utter some painfully stilted lines about cloning.

Eventually, “Gemini Man” gels together in the third act, with some nice emotional beats coming into play. But the flawed script doesn’t develop them throughout the rest of the film. This makes it difficult for viewers to care about the film’s characters until almost the very end. In an odd move, Owen’s villainous official is talked about more than seen, wasting the actor’s talents.

A showcase for advances in technology and technique, “Gemini Man” demonstrates what the future of filmmaking holds. But the disappointing flick doubles down on its flaws, unable to replicate a perfect film. 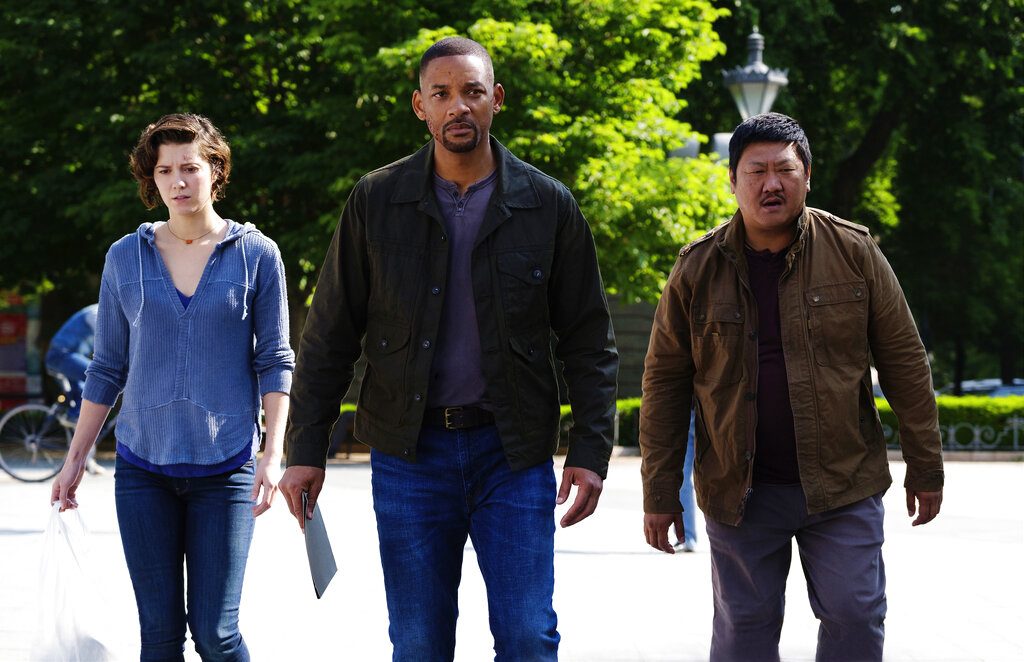 What is the last great Will Smith movie? The answer to that question is not “Gemini Man.”

One of the most charismatic actors in Hollywood once again failed to find the right project, but “Gemini Man” had game-changer potential. With two-time Academy Award winner Ang Lee (“Brokeback Mountain,” “Life of Pi”) in the director’s chair, two Will Smiths and a strong supporting cast (Mary Elizabeth Winstead, Clive Owen, Benedict Wong), the audience should at least expect a good movie. It didn’t get it.

Lee used motion capture for young Will Smith and shot the film at 120 frames per second, instead of the usual 24. Seeing “Gemini Man” in the 3D high frame rate is definitely the way to go. The film looks beautiful, but the technology still looks fake.

In the action sequences, it’s easy to see old Will Smith is fighting a CGI character. Young Will Smith’s movements aren’t natural to the human body. His rapid movement equates more to a video game than real life. That being said, Lee shoots action very well. This should come as no surprise, as he directed “Crouching Tiger, Hidden Dragon” 19 years ago, but the action sequences prove the best part of the film. Lee sprinkled in first-person point of view shots to create some riveting sequences.

Unfortunately, the film is bogged down in its plot, or lack of a plot. Smith is a retired assassin, but can’t get out of the game because he knows too much. It turns out at least one person (but probably more) he killed didn’t do the things the agency said he did. Now, he is on the run. That’s a very similar plot to the Bourne trilogy (It’s best to forget “The Bourne Legacy” and “Jason Bourne” happened) and “Wanted.” What made those movies better than this film was their pace. The Bourne films and “Wanted” use their downtime well, giving the audience useful information to keep the viewer invested.

When “Gemini Man” isn’t in the midst of an action sequence, it grinds to a halt. It doesn’t develop anything. What the audience sees in the trailer is what the movie is. It could have deeper explored the ramifications of cloning or developed either Will Smith’s character more. “Gemini Man” just didn’t take enough time to establish anything besides the basics. As a result, the movie is basic.

Movies also have to be wary of when they create characters who lack emotion, especially when that character is played by one of the most charismatic actors in Hollywood. It makes perfect sense Lee directed Smith to not show a ton of emotion and save it for small bursts. But now the movie takes a few steps back because Smith and Winstead’s chemistry is off. They are both solid actors so there is no reason for this. Making Smith a stoic figure is usually a mistake (see “After Earth” or better yet don’t). While he isn’t entirely stoic in “Gemini Man,” Smith’s charisma is definitely held back.

Winstead is fine, but she could have been better. That’s no fault of hers. Like Smith, she also seems a little held back. Clive Owen is unfortunately wasted, and the best character is portrayed by Benedict Wong. Wong is a solid side character in “The Martian” and the Marvel Cinematic Universe. He always adds to a film. That’s no different in “Gemini Man” as he breaks up the monotony of the plot.

Also, this might be an unavoidable trailer problem, but it takes away from the movie. Some of “Gemini Man” is spent trying to figure out who the person tracking old Will Smith is. It gets to at least halfway through the film before the characters know who he is, which is weird because the audience already knows because of the trailer. So now the movie doesn’t begin for the audience until that point. The characters are catching up to the viewer. Never a good thing. What if the trailer didn’t reveal the young Will Smith? Now, the audience has a twist. Now, the audience is more engaged. However, the visuals seemed to be the film’s selling point so naturally that had to be revealed in the trailer. Those who prefer an engaging plot and a good script are out of luck.

The third act starts to introduce a plot, but by that time the movie is over. “The Purge Anarchy” does something similarly frustrating, which makes the audience think, “Hmm … I’d like to see that movie.” But instead it wasted its time on a lack of substance.

“Gemini Man” swings for the fences with its visuals, but comes up short of a home run. With its focus on visuals, it spent no time developing characters or the plot. A lot of its visuals are impressive, but the CGI Will Smith misses the mark. The action sequences impress so much that hopefully Lee stays in the genre. A movie-lover can appreciate what the film tried to do, but the finished product fell flat as Will Smith is still looking to recapture his former glory.