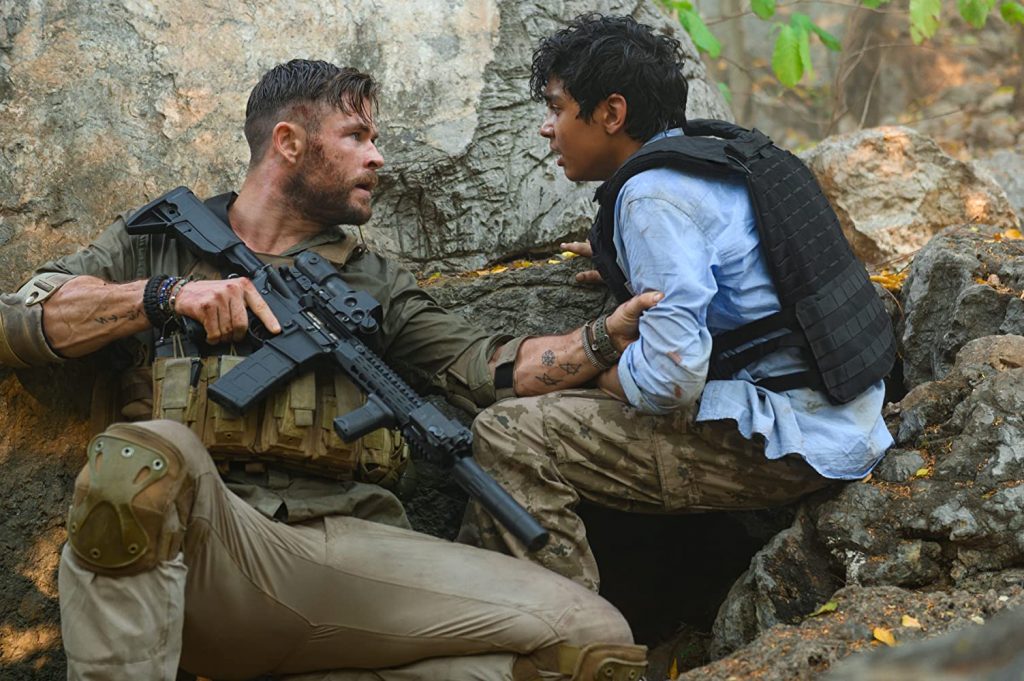 With cinemas going dark due to the coronavirus, we here at Take 2 have been sorting through Netflix’s latest movies, hoping to find a quality title that comes close to replicating the big-screen feel we’ve been missing. It took a few tries, but “Extraction” finally delivered the goods.

The relentless action thriller – the fifth straight film we’ve reviewed from the streaming service – is the best of the bunch by far. Brutal and intense, “Extraction” takes viewers on an adrenaline-fueled race against time, lifted by its daring action sequences. But the heart-pumping adventure also has heart, anchored by a nuanced performance from Chris Hemsworth.

In “Extraction,” Hemsworth plays the hardened Tyler Rake, a mercenary hired to retrieve a kidnapped boy. Ovi Mahajan (Rudhraksh Jaiswal), the son of an Indian drug lord, is abducted as part of the ongoing war between his father and Bangladeshi drug lord Amir Asif (Priyanshu Painyuli).

When the operation goes sideways, Tyler and Ovi are forced to go on the run. The two must evade Asif’s gun-toting henchmen, as well as the unyielding Saju (Randeep Hooda), an associate of Ovi’s father. As Tyler and Ovi become closer, the tormented mercenary feels compelled to protect the boy as he embarks on his own path of redemption.

“Extraction” serves as a Marvel Cinematic Universe reunion. The Netflix original brings together Hemsworth, who plays the hammer-wielding Thor in the popular franchise, with Joe and Anthony Russo, the directors of last year’s megahit “Avengers: Endgame” and “Avengers: Infinity War.”

For “Extraction,” Joe Russo puts on his writing cap and Anthony Russo contributes as a producer. The trio’s past collaborations pay off in a larger-than-life outing that feels like it was made for the silver screen. But fans of Thor should be warned that the R-rated film features graphic and sudden violence. This is a departure from the bloodless MCU films.

Director Sam Hargrave impresses in his feature film debut. The stuntman, who worked on the Russos-directed Marvel films, seamlessly transitions into a behind-the-camera role. Hargraves’ knowledge of stunt work and fight choreography beautifully translates into tackling the movie’s breathless action sequences, from the rescue-gone-wrong to the climactic, all-out showdown on a bridge. The dynamic camera movements convey the scenes’ frantic urgency.

The most ambitious sequence is a nearly 12-minute-long, single-take chase. During the extended shot, the camera follows Hemsworth and Jaiswal in a car, whipping around the vehicle and through it as they swerve through the streets. Then the camera follows the pair through an apartment building, panning up and down stairs and weaving through windows. The sequence also includes gun play, a knife fight, hand-to-hand combat and a fiery crash. It is truly a thing of beauty.

The film provides a fitting showcase for the charismatic and capable Hemsworth outside of the MCU films. The actor lets out his inner John Wick, displaying a wide range of physicality. In an early scene, Tyler single-handedly takes on a roomful of kidnappers using gun fu and even a rake, a clever allusion to his last name. The sequence establishes Tyler as a lethal force to be reckoned with. But Hemsworth also gets to show off his dramatic chops. The actor conveys sadness, regret and compassion as Tyler is driven by a tragedy from his past.

As action-heavy as the film is, “Extraction” is about fathers and sons at its core. As a drug dealer’s son, Ovi is self-aware of his status as a pawn to be used against his dad. Jaiswal gains the audience’s sympathy as the insightful and earnest Ovi. Through their heart-to-heart conversations, Jaiswal and Hemsworth form a believable bond as Tyler sets out to protect the boy. As the determined Saju, Hooda emerges as an equal match to Hemsworth in terms of physical prowess. But the henchman also has his own motivation – to protect his young son. Hooda’s devotion to his family makes him vulnerable, turning him into a complex antagonist.

Operating on a mostly straightforward plot, “Extraction” hides Tyler’s motivation for much of the film. As a result, the movie assumes that viewers will root for Tyler solely based on Hemsworth’s likability – and it works. But the late reveal could make it hard for some viewers to care about the character and his mission.

The film also has some weak spots. David Harbour (“Stranger Things”) pops up as Tyler’s friend. But the actor’s screen time is short, and his storyline takes a predictable route. In an odd choice, the opposing drug lord Asif appears outside of the main action. His side plot – teaching a young protégé the ropes – undermines his influence as a villain and halts the film’s momentum.

With its jaw-dropping action and unexpected soul, “Extraction” helps fill the cinematic void. The pulse-pounding actioner brings the right amount of popcorn-chewing awe and entertainment into our living rooms in a high point for Netflix’s original films. 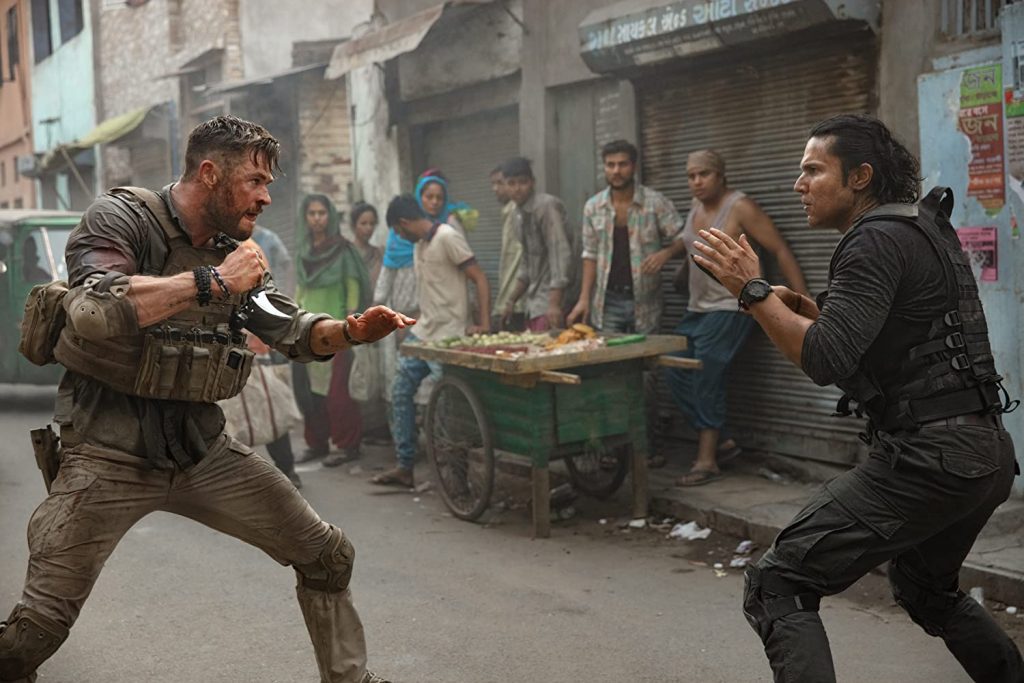 After watching four straight Netflix films with varying levels of disappointment, the fifth one finally came through. Written by Joe Russo and produced by Joe and Anthony Russo, “Extraction” is far from perfect, but it’s the quality and entertainment value I’m looking for at home.

“Extraction” far exceeded my expectations for 11 minutes and 30 seconds. That’s how long the one-take action sequence lasts according to the Internet Movie Database. I was stunned. It’s the kind of value I don’t expect from a Netflix original film. I guess I should start raising the bar.

The film’s tracking shot was reminiscent of “Children of Men,” which has a few groundbreaking unbroken takes. The tracking shot in “Extraction” includes a car chase, gun fu and hand-to-hand combat. The phenomenal camerawork and stunt coordination leaves the viewers jaw-dropped and on the edge of their couches.

The camera somehow goes in the car, out of the car and then back in the car as the vehicle travels at rapid speed. Pretty sure it goes through glass at one point, too. The camera also goes up and down steps and eventually makes a two- or three-story drop to ground level.

Director Sam Hargave deserves credit as “Extraction” was his feature film debut. He has loads of experience with stunts, working as a coordinator, performer and choreographer. “Extraction” takes a similar route to the “John Wick” franchise, which also hires directors with expertise in stunts. The choreography in the unbroken sequence is extraordinary and the action In the rest of the film is great. The action proves one of the movie’s strong points.

The other is Chris Hemsworth (Tyler Rake). The man can act and he further solidified that in “Extraction.” Although he’s been in action films before, and plays the God of Thunder, Hemsworth has never been better in the physicality of a role. He mastered the fight scenes and the stunts. When actors take on that responsibility and put in tireless work, the audience wins. Hemsworth also carries an emotional weight throughout the film and does a phenomenal job building chemistry with Rudhraksh Jaiswal, who plays Ovi Mahajan, and creating a bond with him. That’s essential to the movie.

Jaiswal is ultimately pretty good. He makes the audience care so he does his job. Randeep Hooda, who plays Mahajan’s caretaker Saju, also excels in the physicality of the role and the action sequences. He goes toe-to-toe with Hemsworth during the tracking shot. His character also has an incentive driving him as he is also under duress. This makes his character more intriguing.

Everyone else is pretty bland and the David Harbour cameo doesn’t really fit into the rest of the movie. It seemed as though the filmmakers just wanted to get another big name on the poster or in this case Netflix description. Golshifteh Farahani who plays Nik Khan, the mercenary team leader, doesn’t bring much more than boring line reads to the table. The villain Amir Asif, played by Priyanshu Painyuli, fails to do much of anything. He in fact watches the climax unfold far away with a pair of binoculars. And the film keeps cutting to him, which stalls the progress.

The movie also has a small tonal issue. It could have benefited from a little more humor or levity. However, the film is left to dangle in darkness and Rake’s depressing past. The action sequences are fun, but they are surrounded by a lot of seriousness.

“Extraction” has a dearth of intriguing characters and struggles with tone. However, the almost 12-minute tracking shot will go down as one of the best scenes of the year. Great action and Hemsworth giving it his all is plenty for me.