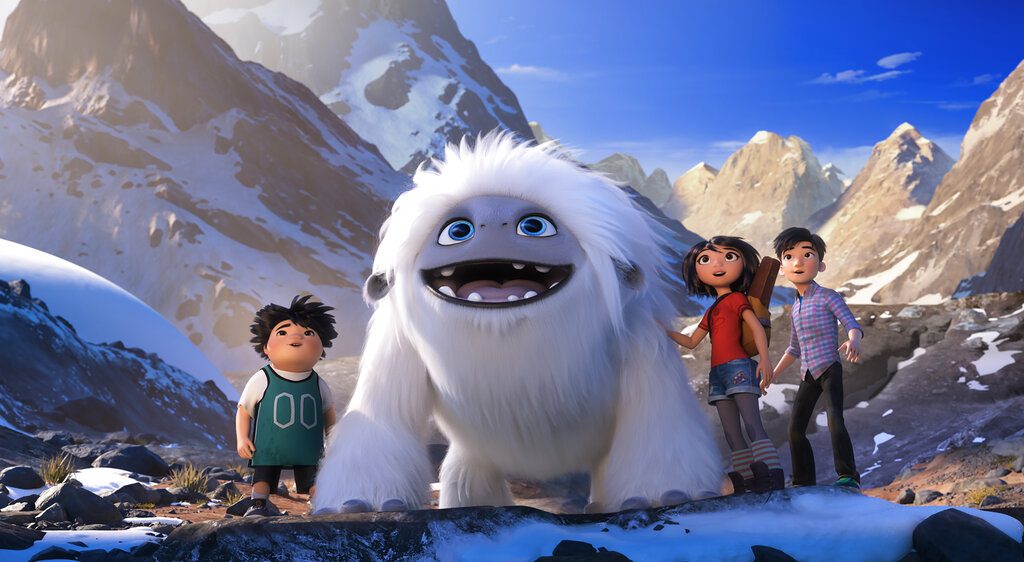 Over the last two decades, DreamWorks Animation has built a name for itself in computer animation, competing with the likes of Disney and Pixar. The studio brought to life the sassy characters in the genre-defying fairy tale “Shrek,” and made audiences fall in love with a boy and his dragon in the stunningly rendered and heartfelt “How to Train Your Dragon” franchise.

Now, the studio brings us the heartwarming story of a girl and her Yeti. “Abominable” is adorable and surprisingly emotional, despite tackling familiar themes in children’s films. Though the cartoon doesn’t break any new ground, “Abominable” is a delightful coming-of-age tale that kids and adults can enjoy together.

Set in the bustling city of Shanghai, China, “Abominable” follows Yi (voiced by Chloe Bennet), a teenage girl whose father just passed away. As she tries to keep busy in the wake of his death, Yi discovers a legendary creature – a magical Yeti – on the roof of her family’s apartment building. After bonding with the Yeti, whom she names Everest, Yi becomes determined to return the Abominable Snowman to his home in the Himalayas.

Joining Yi on an epic adventure to Mount Everest are her friend, the basketball-loving Peng (Albert Tsai), and his older cousin, the vain and self-centered Jin (Tenzing Norgay Trainor). But the gang must evade Everest’s captor, Burnish (Eddie Izzard), a businessman who wants to reveal the Yeti to the world, and Dr. Zara (Sarah Paulson), an ambitious zoologist.

The vibrant “Abominable” swirls with colors. The action moves from the city skyline of Shanghai to flower-covered fields, sandy desserts and the snowy peaks of the Himalayas. The animation isn’t as advanced as that of other DreamWorks cartoons. But the third act contains some striking sequences, including an eye-popping boat ride, the delicate movement of lights in a night-filled grotto, and a tense showdown on a snow-covered bridge.

With his big, blue eyes and toothy mouth, Everest’s design is simplistic. But it’s cute and appropriate for a story about a legendary monster aimed at kids.

The film benefits from the perspective of its female director and writer, Jill Culton. “Abominable” marks the first time a woman has achieved sole writing and directing credit on an animated film from a big studio. The cartoon’s female protagonist, Yi, is brave, talented and sympathetic. The imaginative young woman dreams of traveling to the places her father wanted to visit. She finds solace in playing the violin, the only item she has left of her dad. Bennet does a good job of channeling Yi’s inner turmoil.

Dealing with the grief of a parent isn’t a new theme in kids’ films, but “Abominable” takes a nuanced look at it. Yi struggles to acknowledge her grief, doing everything she can to distract herself from the loss of her father. She finds comfort in the most unexpected place – a Yeti who was torn apart from his own family.

The theme of friendship lies at the heart of “Abominable.” As the two bond over their losses, Yi and Everest form a beautiful kinship. Whereas Yi is reluctant to talk about her pain, Everest – who doesn’t speak a language – can just feel it. The film works because their friendship works. The relationship brings to mind Hiccup and Toothless in “How to Train Your Dragon.”

But the journey to return Everest home also strengthens Yi’s human friendships. Peng, who is younger than Yi and Jin, is funny as well as sensitive. He not only brings comic relief, but a supportive and reassuring ear for Ji. Jin starts out being a girl-obsessed, selfie-taking adolescent, but the young man discovers he is capable of much more. All three main characters have grown and changed by the time the film ends.

Even Izzard’s Burnish is given more to do than a typical cartoon villain, a former adventurer who has his own score to settle with the Yeti.

“Abominable” pushes the message that no one should grieve alone. Her friendships help Yi to gradually open up and face her feelings. The film builds to a highly emotional moment that perfectly uses the song “Fix You” by Coldplay. Make sure to bring the tissues!

At an hour and 37 minutes, “Abominable” moves briskly and is the right amount of time for its story. Though its cutesy presentation may appeal more to kids than adults, adults will find themselves caring about the characters. The story does rely a lot – perhaps too much – on Everest’s magical abilities to carry forward the plot.

Accessible for both kids and adults, “Abominable” couldn’t be more the opposite of its title. Though it might not rise to the level of its more established works, DreamWorks’ newest film is a charming addition to its solid output of cartoons. The kids’ film will pull on your heartstrings and make you root for an adorable monster. 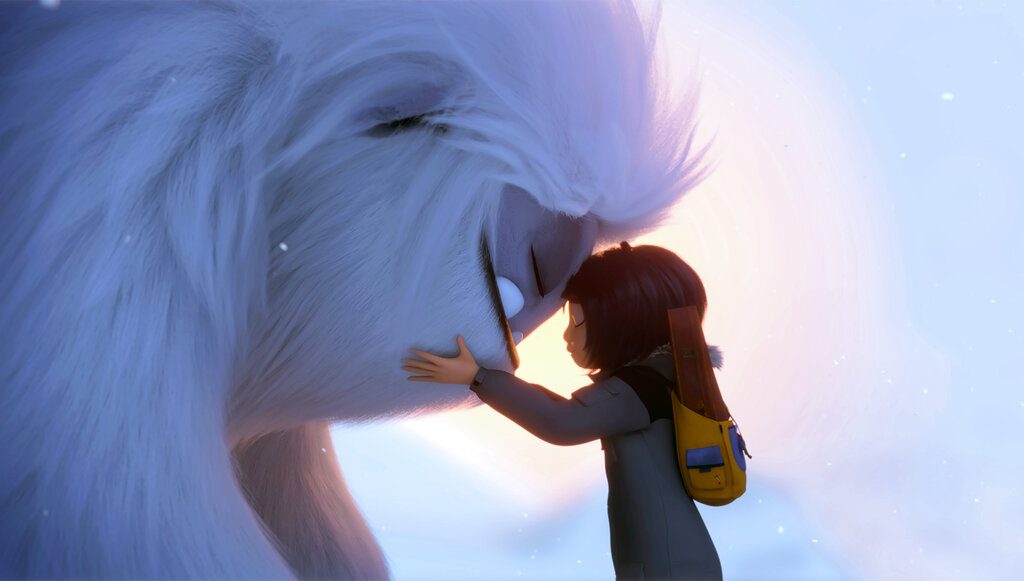 Everest the Yeti, left, and Yi, voiced by Chloe Bennet, in a scene from “Abominable.” (DreamWorks Animation LLC via AP)

While “Abominable” doesn’t bring anything new to the table, it still gives the audience an adventure with humor, emotion and lovable characters the family can enjoy.

Everest, a magical Yeti, is a combination of Toothless from the “How to Train Your Dragon” franchise and Baymax from “Big Hero 6.” While audiences saw these characters before, Toothless and Baymax proved immediately lovable. Everest was no different. He needs a friend and he finds her in Yi (Chloe Bennet). Yi would soon find out she needs Everest, too. The duo travels to return Everest to his parents, while Yi searches for a way to move past the death of her father. Their relationship culminates in a beautiful and emotionally powerful scene that resonates. The use of Coldplay’s “Fix You” didn’t hurt either.

The two are not alone in their quest. Yi’s friend Jin (Tenzing Norgay Trainor) and his cousin Peng (Albert Tsai) joined them and proved great additions to the group. Peng’s relationship with Everest is adorable as they act like young brothers, but Jin stood out, providing great humor and a great character arc. It’s clear Yi and Jin were friends growing up, but grew apart when they got older. Now, Jin is more into shoes and selfies to fit in with the cool kids. Yi did not follow that path, but they still love each other. Everyone relates to that story. Jin evolves throughout the film, mostly in a hilarious montage, as he lets go of the superficial and rediscovers what really matters.

The animation is nothing new, but captures the magic of the story. Everest has the ability to control nature, constantly making it more beautiful. The vibrant colors make the movie look gorgeous. Some scenes stand out because of it, including when Everest turns a field of flowers into a wave.

The antagonists, Burnish (Eddie Izzard) and Dr. Zara (Sarah Paulson), work well. The motivation is more understandable from one than the other, but they prove essential to the story. The voice acting from all characters is solid across the board.

The story again isn’t incredibly inventive, but the beats work because of the strength of the characters. The plot points get the audience to the emotional scenes and the crux of the film. Some may see it as a negative, but the pace is quick and the film is a brisk 1 hour, 37 minutes. Because of that, some development was sacrificed. Yi figures things out way too quickly and the characters mostly turn to magic to escape from situations. It didn’t take away from the film, though, and kept the audience engaged. Also, although the main characters are on an adventure, the antagonists chase them throughout the movie, which again pushes the pace. In this particular film, an emphasis on pace was the right call. The audience already loves the characters and is willing to go with them on the journey. No need to get bogged down in more character development.

“Abominable” is a solid film the whole family, especially kids, can enjoy with lovable characters and emotional scenes that push it over the top. It doesn’t reach the heights of a “How to Train Your Dragon” film and proves a derivative of better movies. However, it gives the audience a fun time at the theater and strong, relatable themes.