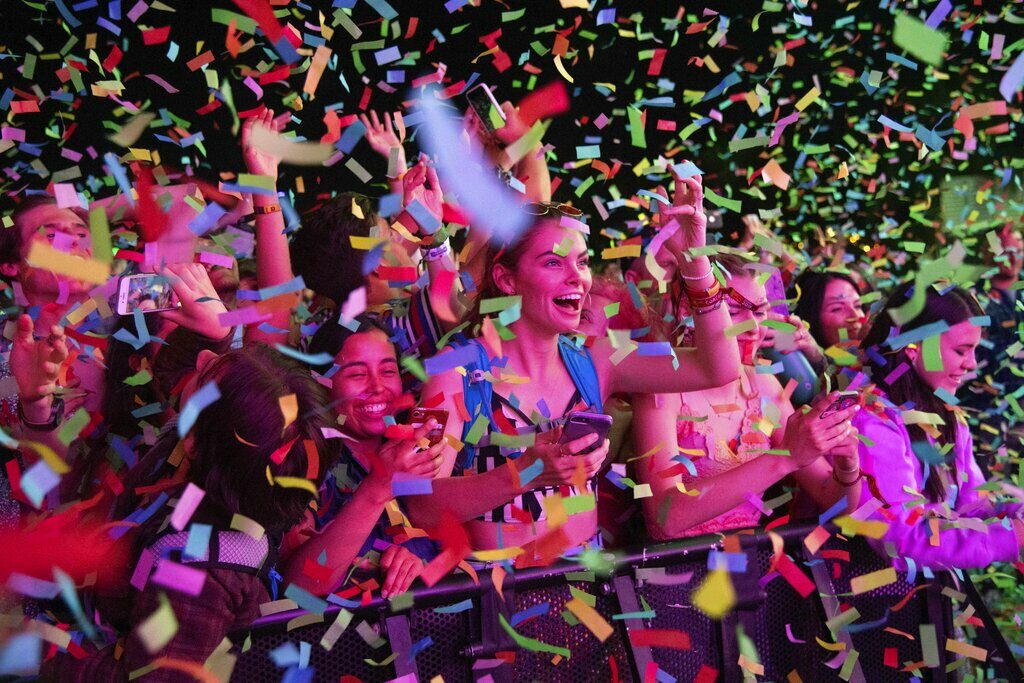 Coachella has become more and more of a platform for Hollywood over the years. When Lady Gaga stepped in for Beyonce in 2017 as a headliner, the pop star turned the music festival in the desert into a movie set, with Bradley Cooper shooting her set as part of “A Star is Born.” The film would wow audiences a year later, and bring Gaga her first Oscar for best original song.

This year’s festival has attracted several topline actors who are exploring their musical side and singers who have dabbled into acting. Thanks to the festival’s live stream on YouTube, people at home didn’t have to fork over a fortune to stay in the desert for three days, experience FOMO or be in the presence of lots of sweaty people.

Charlotte Gainsbourg on big screen (for now) and Childish Gambino on the cell while watching #coachella2019. No expensive tickets, sunburn, or other people's funk involved.

The festival’s opening day Friday was electrified by three acting talents at various degrees of their music careers. Donald Glover was one of the three headliners under his persona Childish Gambino. With Coachella possibly serving as his stage name’s swan song, Gambino sported the look he had in the celebrated music video, “This Is America,” dressed only in simple gray pants. The set had an improvisational feel with the camerawork similar to a documentary.

Donald Glover. I love you. Would you mary me? ❤️ #childishgambino

With the opening video filled with festival-goers who were not amused that the actor/musician/renaissance man was performing. Some suggested that they would be excited if he brought in a special guest on stage. It was an unexpected opening, but the 55 minutes that followed proved those naysayers wrong.

Early in the set, Gambino addresses the audience of 100,000, telling them to put the cellphones away as the concert was his version of church. With singers in church choir garb, Gambino meant business. Times of reflection (paying tribute to his late father and the recent death of Nipsey Hussle) blended with jubilance (getting everyone to sing along to “Sober”). About two new songs were included in the set, but Gambino’s past hits were front and center.

Glover/Gambino also debuted a short film co-starring Rihanna, Letitia Wright and Nonso Anozie titled, “Guava Island.” Directed by frequent “Atlanta” collaborator Hiro Miruai and written by his brother Stephen Glover, Donald Glover stars as Deni, a musician who lives on the island whose boss, Red (Anozie), does not want him to sing at a festival in fear that the workers will not return to their textile factory the next day. Rihanna is Kofi, Deni’s girlfriend and muse who works in the factory, and Wright is her co-worker Yara.

Shot in Cuba, the film is saturated in animation, color and culture. The music is some form of Gambino’s hits, including a new visual take on “This is America.” Unfortunately, Rihanna doesn’t sing in this short film, but her acting is good.

Prior to Glover/Gambino taking the main stage, Janelle Monae brought her “Dirty Computer” act to Coachella. For 45 minutes, the singer brought elements of her 2018 “emotional picture” and accompanying world tour to the festival as clips from the short film were projected onto the stage. Contrasting Gambino’s simple wardrobe, Monae had five costume changes during her set. Also, her stage featured a red throne and multiple dancers. Performers Lizzo and Tierra Mack made appearances as Monae performed “I Got the Juice.” Although she has appeared in films like “Hidden Figures,” “Moonlight” and “Welcome to Marwen” in the last three years, Monae made her return to music about a year ago.

Another actress balancing a musical act at Coachella is Charlotte Gainsbourg. The daughter of actress Jane Birkin and singer/songwriter Serge Gainsbourg, Charlotte Gainsbourg has kept an active music career while starring in movies like “I’m Not There,” “The Science of Sleep” and “Antichrist.” Sandwiched between Monae and Gambino at Gobi stage, Gainsbourg performed with her band in white T-shirts and blue denim. For a stage that was more for electronic bands, Gainsbourg offered a more subdued set, with only long light beams serving a stage decor. Much of the set featured songs from her 2017 release, “Rest,” with tracks she served as the songwriter.

On Saturday, there were not as many actors on the bill, but mixed in with the dance crowd was Idris Elba. For those who only know of the British actor for his television roles in “The Wire” and “Luther” or his films, “Pacific Rim,” “The Dark Tower,” “Beasts of No Nation” and the “Thor” series, some may be surprised to find out that Elba has as DJ altar ego as DRIIS. He has even hosted documentaries on hip house and club music, and is starring in the Netflix series, “Turn Up Charlie,” as a struggling DJ. The two-hour set, according to The AV Club and PopSugar, Elba’s real skills were on display under a scatter of lights. The crowd was on its feet in Instagram posts as he spun classic house hits from Inner City and more. Unfortunately, his set was not part of the live stream.

Overview Effect by Poetic Kinetics is seen at the Coachella Music & Arts Festival at the Empire Polo Club on Saturday, April 13, 2019, in Indio, Calif. (Photo by Amy Harris/Invision/AP)

If you missed any of the weekend acts, Coachella is streaming the second weekend, starting Friday at 8 p.m., on YouTube. “Guava Island” streamed for free for 18 hours on Amazon and one hour on YouTube on Saturday, but is now available for streaming on Amazon Prime.