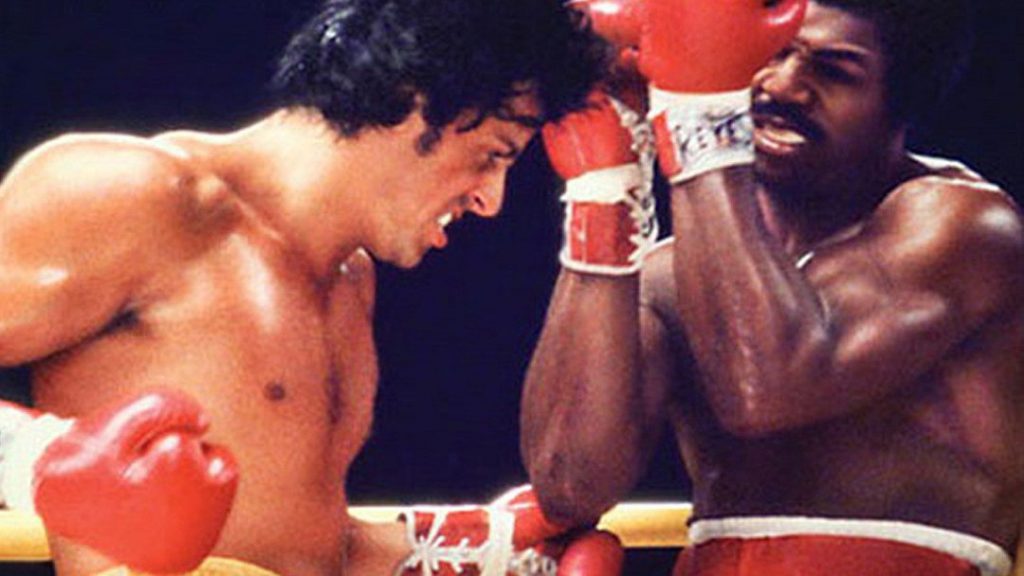 It occurs to me today that I should have called this list something besides the “Worst Sports Movies.” Maybe “Overrated Sports Movies” or “Sports Movies that Frustrate Me on a Personal Level.” I don’t know. I just know that I enjoy Rocky II, that if it’s on TV — you know, on those rare occasions when you can find an installment of the Rocky franchise on some cable network somewhere — I’m going to stop and watch.

That said, Rocky II gets on this list, no matter what I call it, because it did something that in hindsight should have been rather impossible for a sports fan/movie buff like me.

It knocked the original Rocky down a peg in my heart.

So, if any of you saw the list of Top 10 best movies The Times-Tribune and Citizens Voice published last week at the conclusion of Joe Baress’ Gamefilm series, you know highly I regard Rocky. 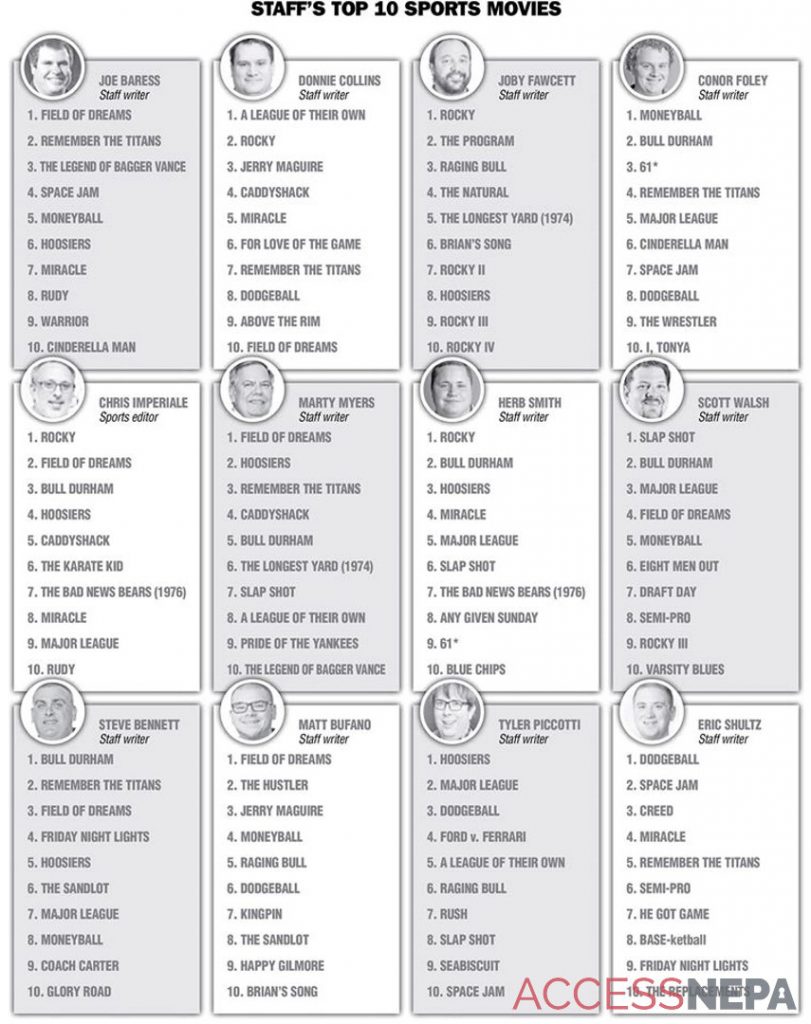 But let’s be real here: On its own, Rocky is the best sports movie ever made. I believe it’s the only sports movie ranked on any of our lists that won the Academy Award for Best Picture, and it did so in 1977, when it had to beat All The Presidents Men, Network and Taxi Driver, absolute classics all. I ranked A League of Their Own ahead of Rocky, but great as that movie was, it wasn’t beating those three for Best Picture. Rocky is an all-time film, sports or not.

The fact it was left off of eight of the 12 ballots above shocks — and somewhat sickens — me. 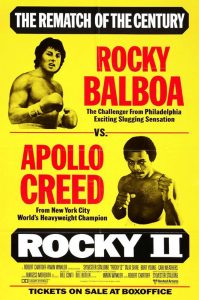 And on its own, Rocky II is perfectly all right. Underdog fighter gets a second shot at the undisputed champ. He has some family issues. He has a lot to prove. He has to motivate himself. He gets in the ring. He outlasts the champ to claim his biggest victory. It’s no worse than the third-best of the Rocky sequels, on its own.

The problem I have is, it taints the reasons why I loved Rocky so much, ever so slightly.

If you read my criticism of Field of Dreams that published Friday, you know believeability is a big factor for me in a sports movie. Sports, after all, is the greatest nonfiction story in the world. Watch it enough, you’ll see something amazing. It will tell you true stories Hollywood wouldn’t buy as fakes from the desk of the world’s cheesiest writers.

For Rocky to inspire, for it to be the story it wanted to be, I really had to believe only one thing: That Apollo Creed is an unbeatable machine.

Rocky was a fun-loving guy a bit down on his luck, a man who wanted to be better but didn’t know how, a fighter who maybe didn’t believe in himself as much as he should. And, he got a break. He got that one chance to wipe it all away, and that happens in sports. It’s a totally believable scenario, crazy as the method that match came about might have been.

There’s a scene where Rocky is watching Creed give an interview about the match, and he’s meekly speaking to Adrian about what he wants. Mainly, to go the distance. To be standing at the end. To show everyone — no, to show himself — he could stand with the best in the world on one night, that he could put it together and be great. If Brando had “I could have been a contender” in On The Waterfront, Sylvester Stallone essentially was saying “I want to know if I’m a contender” here. It was such a heartfelt, honest moment in the history of cinema. Anyone who has played a sport has had that moment at one point or another in their own lives.

I never thought Rocky Balboa could beat Apollo Creed. Name one local club heavyweight you think would beat Tyson Fury today, or one that could have beaten Mike Tyson or Muhammad Ali or Lennox Lewis or Evander Holyfield. It’s just a different level of competition. As fun as the local fights are, it’s rare to see a local club fighter make it to the big time, because the athleticism and the experience and the savvy you need to win at the championship level is so much better. My favorite moment in Rocky was the chaos in the ring after the final bell rang to end the 15th round, after Creed said there would be no rematch and Rocky responded that he didn’t want one. My favorite moment was when Adrian ran into the ring, hugged the battered, bleeding and bruised Rocky and told him she loved him as he smiled. In the background, you can hear the ring announcer bellow that the winner, by split decision, was Apollo Creed. If you weren’t listening for it, you wouldn’t have heard it. And that had to be by design, because the result didn’t matter. Those 15 rounds weren’t about Creed, or about winning or losing. It was Rocky against himself. And he got everything he set out to get.

It’s the ultimate underdog story, and that story taught us something about sports that we all need to embrace: Sometimes, everything around the result transcends the result. Rocky Balboa went toe-to-toe with the immovable object, the great champion, and he held his own.

The only problem is that as I got older, and as I got more and more into sports, I started to see Apollo Creed less as an immovable object and more as a shot fighter after Rocky II.

Know what Creed’s record is in the Rocky franchise? It’s 1-2-0. He won by split decision, got knocked out twice and was killed in the ring by a raw rookie who completely overmatched him. And I get it: It’s Hollywood. There was lots of money to be made by making Rocky an icon, a championship example that dominated the box office every five or six years. Rocky had to win the championship at some point.

But when Creed couldn’t knock him out in the second fight, it made me think about the possibility he was at the end of his rope anyway.

Years ago, a friend and I watched Rocky, and he theorized that the result of the first bout shouldn’t have been a split decision. So, we decided to score the match as if we were boxing judges. We were young and bored.

We saw parts of just seven of the 15 rounds fought in the first film — 1, 2, 7, 8, 13, 14 and 15. Rocky knocked Creed down in the first round of that fight, and I scored it 10-8 in his favor. It could have been 9-8 because Creed dominated the vast majority of the round. But to be fair, we decided to be very Rocky-centric with the scoring. He was going to get every benefit of the doubt. 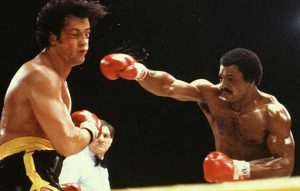 Apollo Creed, right, was a tour de force in the Rocky franchise. Problem is, he never had a convincing win.

I gave Rocky rounds 1, 2 and 15. Creed got 7, 8, 13 and 14, getting a 10-8 duke in 14 because he knocked Rocky down for the first time. Obviously, these weren’t full rounds. But we were going on what we saw. On my card, Creed won those rounds, 66-65.Conceivable that it could have been a split decision? For sure. But again, Rocky was the one getting the extra point when it was close, and Creed was the one losing it. It could just as easily have been 66-63 in Creed’s favor. But whatever. It was close. Creed won, and we were all OK with that.

When I rewatched Rocky II, i scored the footage of the fight, and while they didn’t show every round, they did show most. And to be fair, I put a lot of credence into the ringside announcers’ assertion that Creed was winning most rounds.

Heading into the 15th, I had Creed ahead of Balboa, 119-109. Rocky clearly won just the seventh round. Mickey wanted to stop the fight.

“You’re getting killed out there,” he implored Rocky.

Referee Lou Filippo was predictably derelict in his duties, allowing a fairly savage, one-sided beatdown proceed as long as he did. In the 19 rounds of boxing between Creed and Balboa that we have some frame of reference to judge, 13 were clearly Creed’s rounds. Balboa had four and two were draws.

Creed was clearly — by a lot — the better fighter. A superior fighter in his prime puts away Balboa the second time.

Hey, Rocky is about Balboa’s tenacity and determination more than it is his skill. Always has been. But winning that second fight with a 15th-round knockout, for me, took that first fight in which I was perfectly satisfied that an underdog got his one chance and absolutely willed his way to the most of it and sapped the power out of that. Rocky I was great because Rocky wasn’t a contender.

Now, he was the champion and an absolute superstar, and that’s where the series had to go from a financial aspect. That franchise made very wealthy icons out of a lot of people. I just wish there was some way that Rocky hugging Adrian, ignoring the ring announcer because nothing he said was going to matter, because he had given his absolute all, was the lesson we all took from that story.