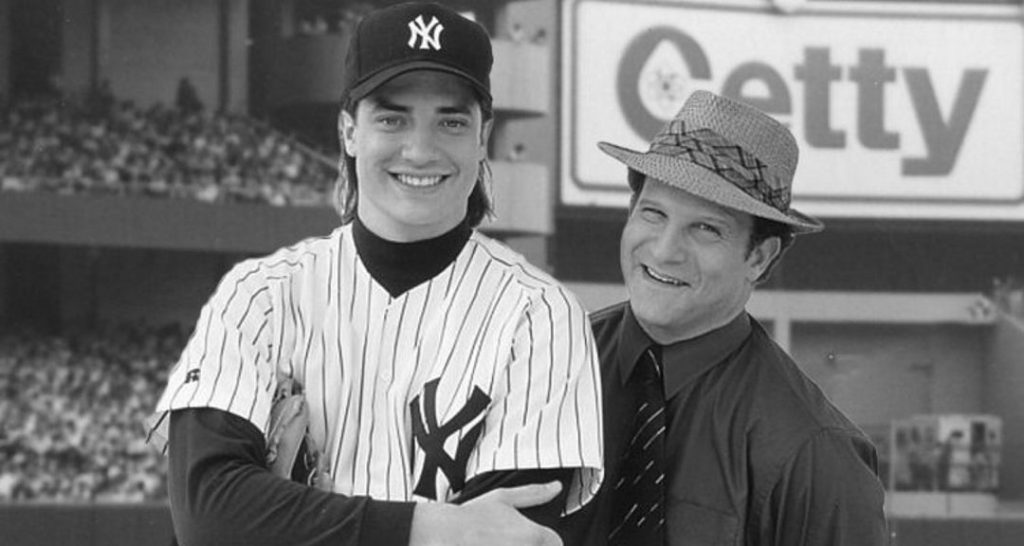 “So, what do you think is the worst one?” my wife asked me, when I told her I was writing a list of the 10 worst sports movies ever made.

I proceeded, for the next 15 minutes, through fits of guffaws and bouts with bitter anger and moments of frustration, to tell the story of The Scout. She laughed pretty much from start to finish. I assured her I told the story better than the writers and actors did.

This could have been life-changing for athletes. And it turned out to be a total waste of time even for die-hard sports nuts.

“Well,” I responded to my wife’s question, “it’s a story about some scout who found, indisputably, the best baseball player ever created by God playing in some league in Mexico.”

That scout is Al Percolo, played by Albert Brooks, who opened the movie by watching his star pupil — pitcher Tommy Lacy — throw up on the mound in his big league debut. Seemed understandable to battle nerves, but whatever. Angered that he would recommend someone so seemingly fragile to take the mound at Yankee Stadium, the Yanks send Percolo to baseball purgatory — which evidently is Mexico, where hundreds of talented major leaguers originated, but whatever — to try to find another prospect. He stumbles upon a dusty field where he finds… 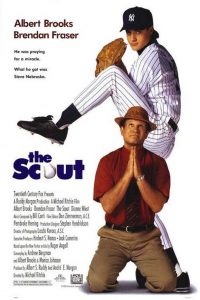 The player is Steve Nebraska, played to a high school drama club level by Brendan Fraser, who is absolutely obliterating the competition. He homers every time up. He pitches a masterpiece. He gets carried off the field like he’s Rudy. His batting average — get this, folks — is 1.000. His fastball sits — get this, folks — at 100 mph.

He’s Justin Verlander decades before Justin Verlander. And he’s Babe Ruth decades after Babe Ruth. Only, he’s a heck of a lot better than both of them. Al knows he better call this one in, and as you might expect, the Yankees don’t believe a word of this scouting report. They fire Al, because he’s obviously lying.

“So, Al brings Steve back to the states and has a showcase for him,” I told my wife. “And while the Yankees fired him for calling in a ludicrous scouting report, know how many teams showed up to see Steve at the showcase? All of them. ALL. OF. THEM.”

“Even the Yankees?” she asked.

“Who do you think hosted the showcase?” I shrugged. 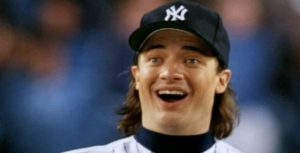 Steve Nebraska is amazed at his own success in his major league debut. Not sure why. The dude throws 112 mph.

At said showcase, Nebraska takes two swings and hits two bombs batting right handed. Then he turns around and hits the third pitch he sees over the wall, batting left-handed. Off of Brett Saberhagen, one of the best pitchers in the game. This is after Nebraska made Saberhagen look like a complete amateur, striking out Keith Hernandez on three 110 mph fastballs. Nebraska was feeling it, and at that point, the showcase was over. The Yankees gave him $50 million, almost 10 times more than any player in the league was making at the time.

And honestly, it’s a sound investment. This guy is unreal, talent-wise. The Yankees weren’t exactly going to send him to Triple-A Scranton/Wilkes-Barre to get him some seasoning. He was going to immediately be their ace pitcher and their cleanup hitter.

Steve has some demons. On the way back from Mexico, he and Al got separated in the crowd at Newark International Airport, and Steve temporarily loses his mind until Al returns. His first night back in the states, Steve has a nightmare that causes him to wake up swinging at intruders who weren’t in the apartment.

More out of concern for his own reputation — he doesn’t want another Lacy-like incident sticking to him, after all — than genuine concern for Nebraska’s well-being, Al calls a psychiatrist: I kid you not, her name is Dr. H. Aaron (you know, because it’s a baseball movie!). She agrees to talk to Steve and takes about three minutes to determine this guy has some debilitating mental health issues.

Turns out, Steve Nebraska had it rough as a kid. His father abused him, then he left him. That’s the real problem here: Steve has blocked out most of his childhood trauma but, every once in a while, something brings a little bit of it out, and he gets violent. Dr. Aaron is worried the pressure of being a star major league prospect, the stress of being on the mound in a big spot in a cathedral of baseball, will push Steve over the edge. And in her defense, there are signs of that. Steve snaps often at Al. He practically assaults reporters. He’s clearly not ready for the big-time, and what he really wants is a father figure to guide him.

Al wants no part of being the kid’s father, though. He wants him to toughen up, get in the game, dominate and get both of them paid. It’s really his only motivation, and Al proves that by consistently joking about Nebraska’s mental state and hiding evidence of his near breakdowns from both the Yankees and Dr. Aaron. Dr. Aaron only clears him to play baseball on the condition that Steve visits her every day until he makes his debut.

“Did I mention that debut is contractually obligated to be in Game 1 of the World Series,” I said.

Steve continues working with Dr. Aaron, and they’re making progress. He trusts her. But this kid needs years of therapy.

Too bad the World Series is upon us, and the Yankees are expecting him to make his major league debut as their Game 1 starter. This is really all Al cares about, and he’s pushing Steve to the stadium.

“So here we are. We’re approaching Game 1 of the World Series. Sold out Yankee Stadium. Teams warming up. And nobody has even seen this guy! They’re just expecting he’s going to show up in time and pitch. Nobody in the bullpen warming up! Nobody in the dugout thinking, ‘Maybe we should get someone else ready in case this kid no-shows!’ They’re just going about their business wondering where this guy is!” I shouted.

“That would never happen in real life,” she said.

“Well, I kind of saw something like it in Triple-A once,” I said. “But that’s a different story.” 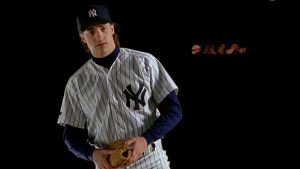 The Scout had a chance to explore the mental side of baseball. But instead, it opted for a few cheap laughs at Steve Nebraska’s expense.

So where does Nebraska ultimately turn up? Of course, on top of the facade in right field at Yankee Stadium, hanging onto the lights. I’ll never understand how he got up there, or how long he was up there. But Al sends a helicopter to the lights so he can drop down and take Steve to the mound.

Up there, Al somewhat comes to his senses, or he realizes the cause is hopeless. He tells Steve he doesn’t have to pitch in the game, and suddenly, Nebraska has the father figure in his life. He calms down, grabs the ladder, is taken to the mound via helicopter. And he is ready to go. No bullpen session. No meeting with the catcher and the pitching coach. No “Hey, how are yas?” for the teammates. He just picks up the ball and the World Series is underway.

“Well, his first pitch was 112 mph, and it knocked over both the catcher and the umpire,” I said. “Ozzie Smith swung and missed. Oh, and he pitched a perfect game. On 81 pitches. Which means he struck out all 27 batters he faced on three pitches apiece. Nine consecutive immaculate innings. A perfect perfect game. … I think he might’ve hit a home run in the game, too.”

It was. Sadly, what we had here was just about the laziest sports movie you could ever imagine. A movie that had potential to delve into some topics that would have been worth understanding, providing no understanding. A comedy that wasn’t funny. A baseball movie that hardly looked like baseball. A movie that gave up.

There’s no quitting in sports, they say. This movie quit. That’s why it stands alone at the top, and may forever.