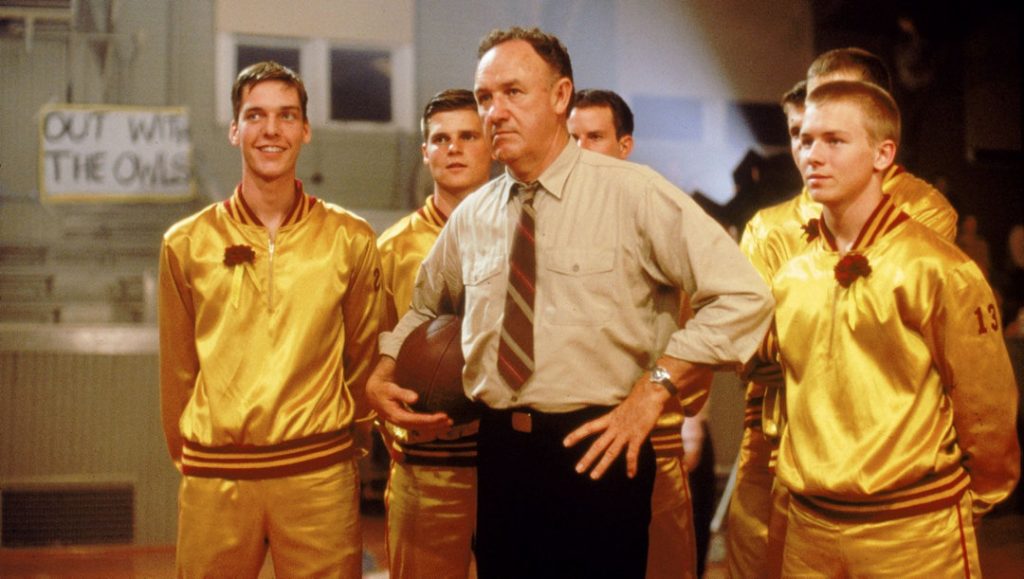 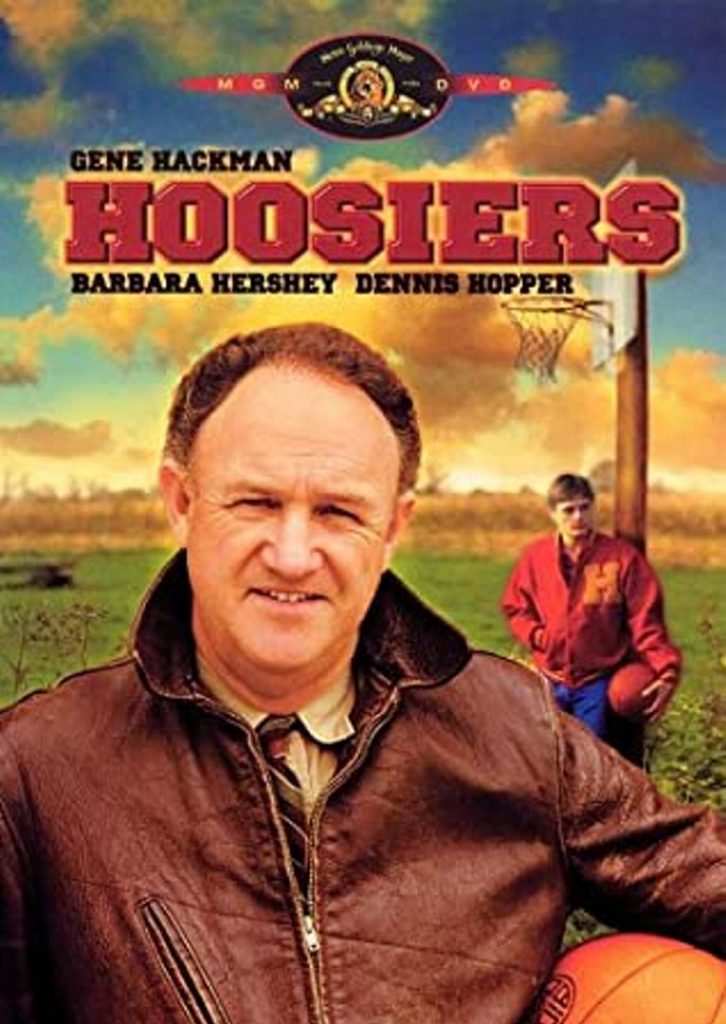 Humankind is an amazing thing. You can put 100 people in a room — 1,000, even — and tell them all a story. Not all of them will hear it the same way. Some will enjoy it. Others will not. Some will identify with the characters discussed, others will find them completely unrelatable. A few of those people in that room may be spitting images of each other, but totally unrelated. A few others may be mother and son, or sister and cousin, or brothers, and they may not bear a resemblance. It’s weird and wild stuff that we deal with.

Hoosiers is a prime example of all of this. Several friends of mine consider the Gene Hackman flick to be the finest in the sports genre. They find it inspiring and exhilarating, a timeless tale of the little-town underdog beating the big-city behemoth for all the marbles.

I, on the other hand, have found Hoosiers to be a slow-moving snooze-fest. Hackman’s Norman Dale, the first-year Hickory High School coach who spends the majority of the film trying to win over the Hickory faithful, adopts a slow-moving, defensive-minded approach that is kind of typical of the film’s story itself. Everything just moves…kind of slow. The Dale character’s backstory is unintriguing and unfolds at half the speed of a 45-year-old Carlton Fisk trying to beat out a double play grounder for the White Sox. Jimmy Chitwood, who has given up basketball to focus on his studies while he mourns the death of his prior coach, spends the majority of the film shooting jumpers in his yard. You have the teacher who doesn’t want Jimmy to play. You have the townsfolk who take their team way too seriously. You have…a lot of things you’d expect to see in a true underdog story. You’ve really got one character — town drunk/fill-in coach Shooter, as played by Dennis Hopper — who adds any kind of outside-the-box humanity to the mix. But good as Hopper was, this was really a kind-of-predictable, kind-of-unexciting story of Dale and Chitwood and the little town that could, kind of, sort of loosely based on real-life events.

Problem for me is, I’d rather watch a film that retold the real-life events.

The 1952 Hickory team was based on the Indiana state championship team at Milan High School in 1954. There were some basic similarities between the real program and the dramatized one.

And that’s about it. 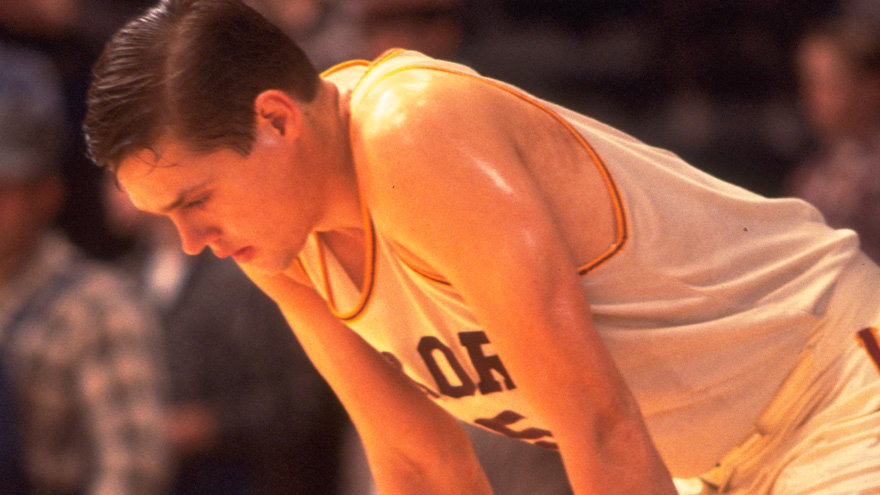 Jimmy Chitwood was the soft-spoken savior of the Hickory basketball team in the movie Hoosiers.

All those storylines for the movie, cliched as they were? Completely made up. The season didn’t start with a coaching controversy. It didn’t proceed with referees conspiring against the team. It didn’t have four players and a manager suiting up to form their team. Plump didn’t jump in halfway through to save the coach’s job. There were no drunken coaches who know the game inside and out, looking for redemption (that we know of).

The real story was much better than that.

During the 1951-52 season, the Milan coach, a guy named Herman “Snort” Grinstead, had a plan to motivate his team. Down 20 at halftime, Grinstead challenged his seniors by pledging to take their uniforms and kick them off the team if they didn’t make a comeback.

They lost by 42, and he had their uniforms by game’s end. From that point on, the younger players — the ones who would lead the 1954 championship team — got their chance to play, and they played well to close out that season. Snort, incidentally, was fired for ordering new uniforms without permission from the school.

The new coach, Marvin Wood, had the Indians playing well from the start. They were certainly a great underdog story — in 1952-53. He instituted the “cat and mouse” offense that became the trademark of the championship team, a four corners approach that enabled the Indians to best utilize their good depth, talent and size.

Milan won its first regional playoff game ever that season, controversially. Down 9 late in the game, Milan came back with the help of a clock operator who delayed starting the clock after an inbounds play by several seconds. Milan would win in double overtime, then went on to win the region and advance to the state’s final four, where they got blown out by the much larger South Bend Central High.

Four starters returned the next year for Milan, and for as small as the school was, they had title hopes. They were experienced. They were tournament tested. They scheduled several larger schools to prepare as best they could for that season’s championship run. In short, they had a shot. They were really good, and most in Indiana realized that. 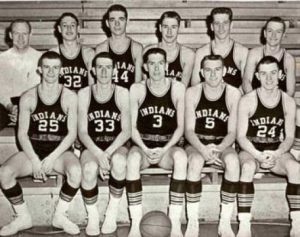 They won their sectional by an average of 24 ppg. They avenged one of their two regular-season losses while cruising through the regionals.

Then, things got really interesting. In the Sweet 16, they held on to outlast Montezuma High, which had an enrollment of — get this — 79. In the round of 8, the Indians took a seven-point halftime lead against Indianapolis’ Crispus Attucks High School, led by some sophomore named Oscar Robertson and held on to win by 13. Attucks High would win the next two state championships.

Milan won the semifinal easily before the defensive struggle that was the state championship against Muncie Central, and that game went about the way the championship game in Hoosiers went.

Bottom line is, none of that really is prudent to Hoosiers on the surface, because to my knowledge Hoosiers never really pretended to be the historic retelling of that Milan High School team and its 1954 championship. Personally, I find the real story far more interesting, and infinitely more compelling, than the one that ended up being contrived to dramatize it on film.